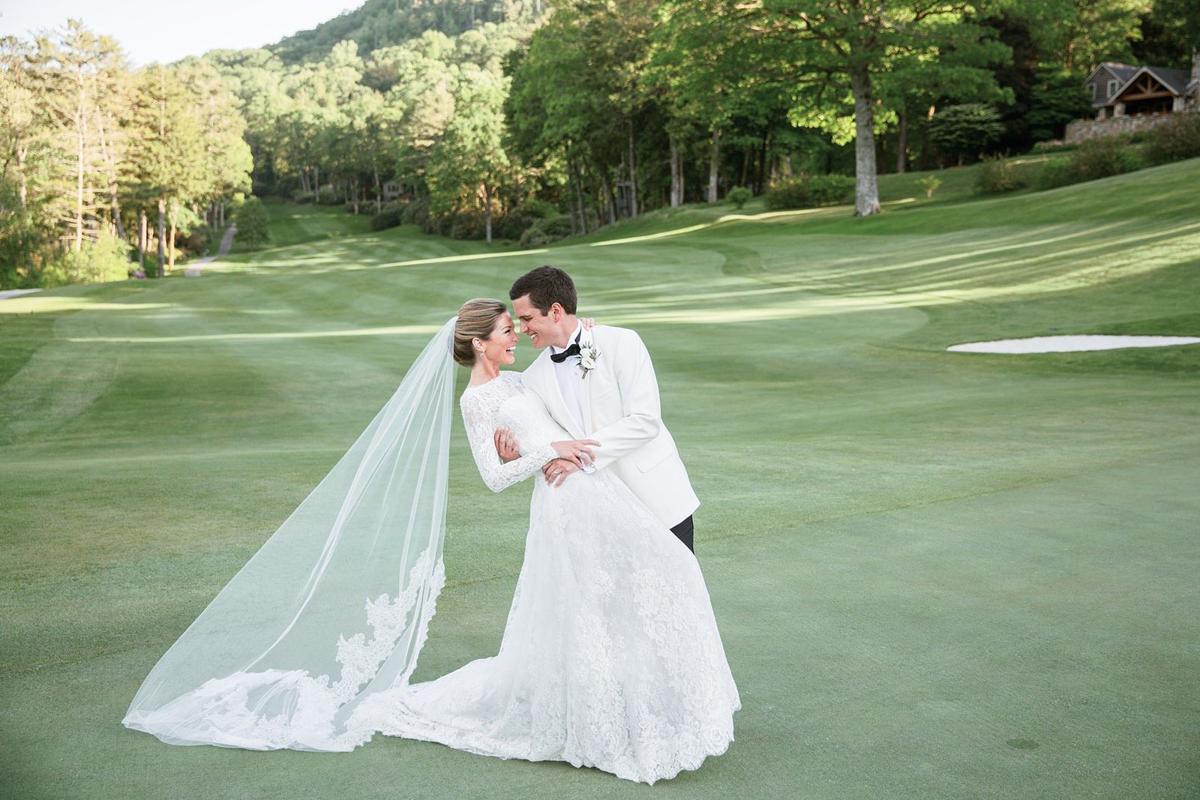 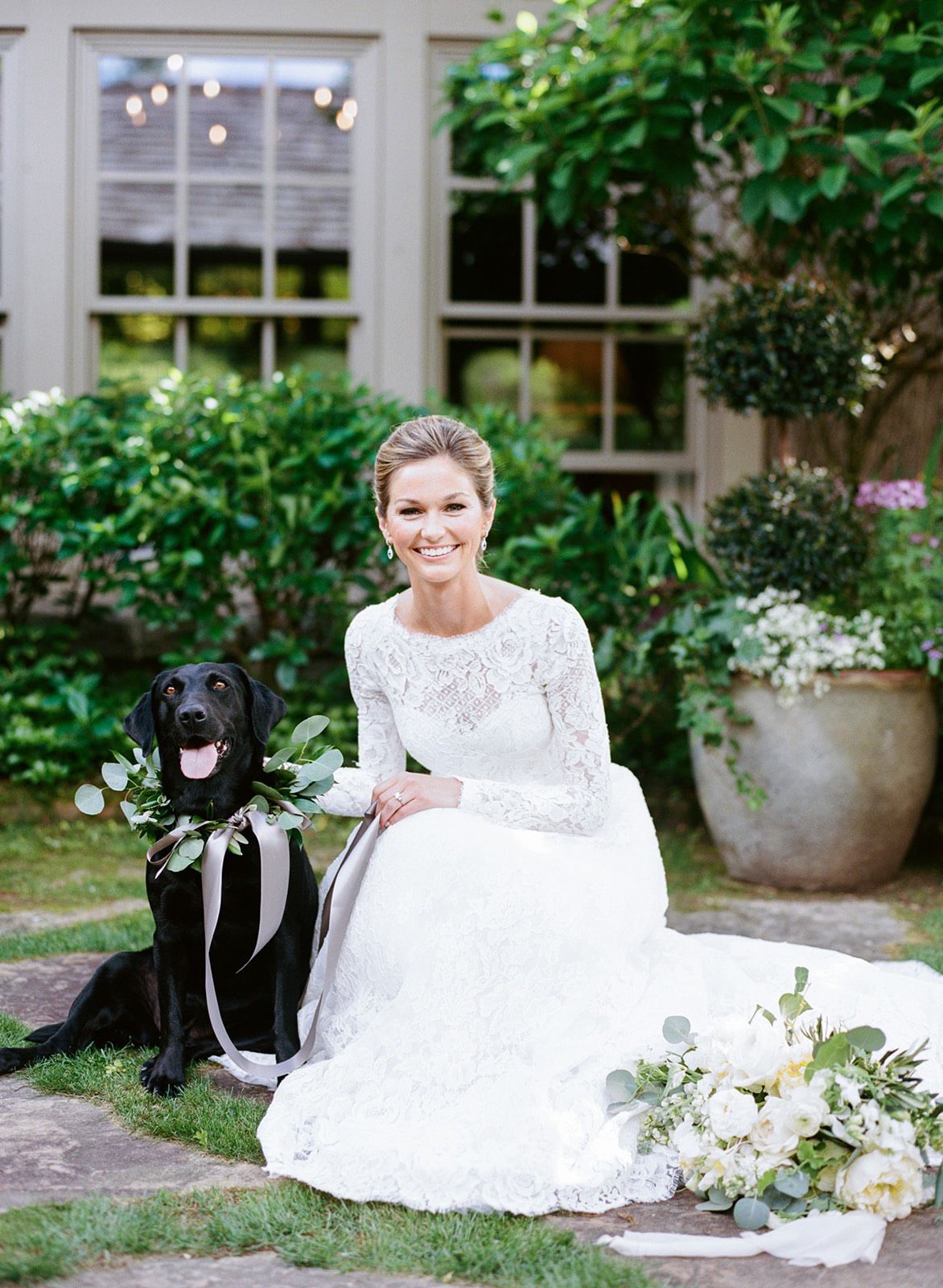 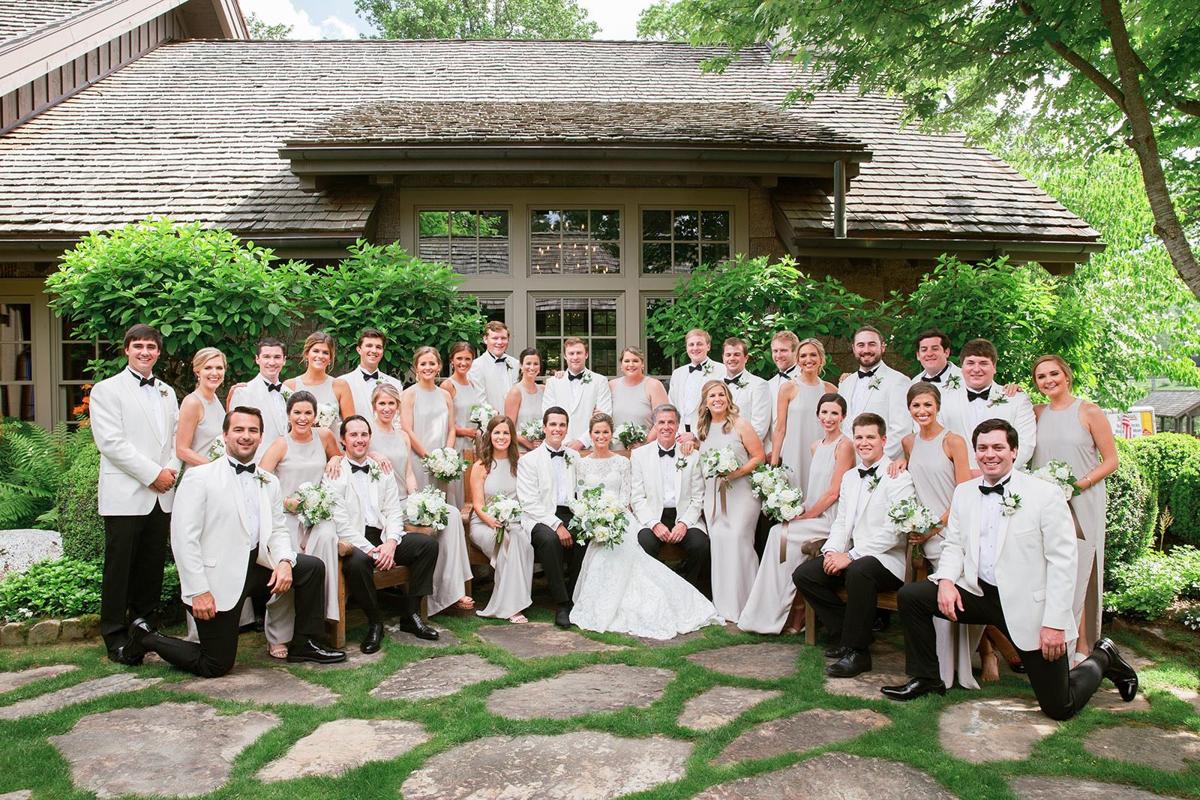 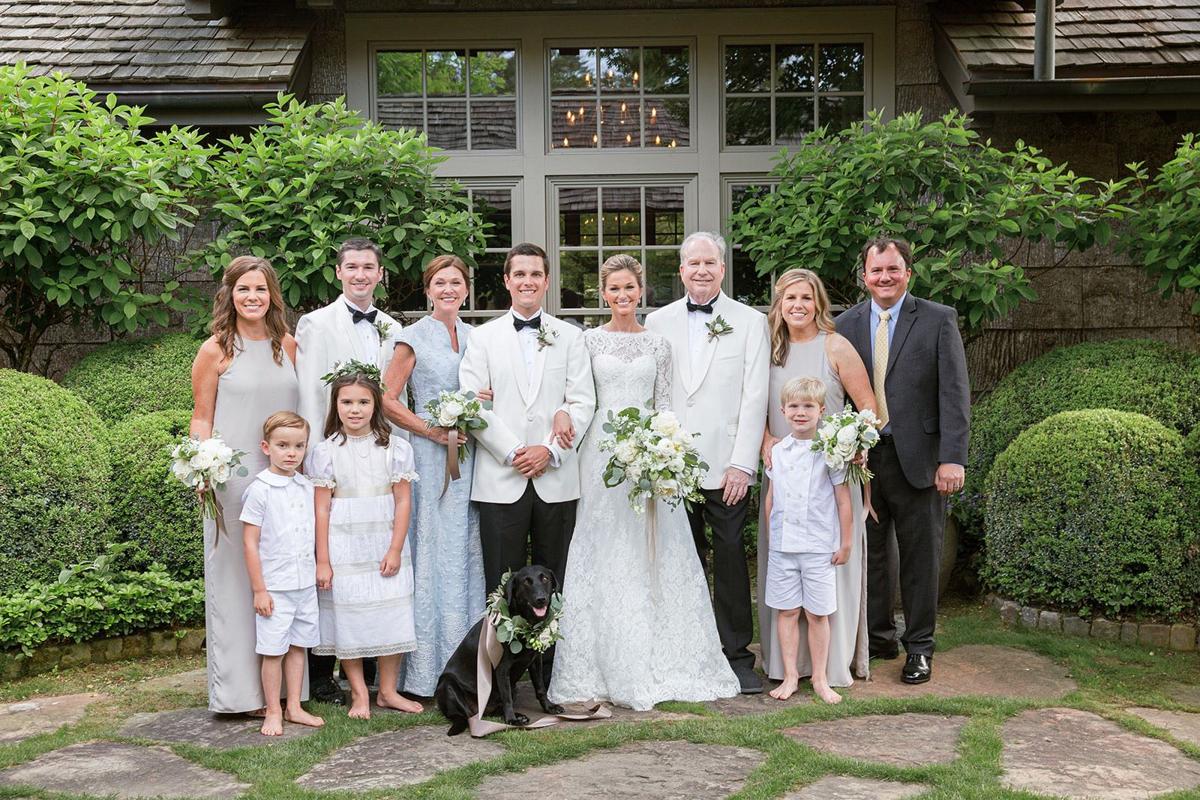 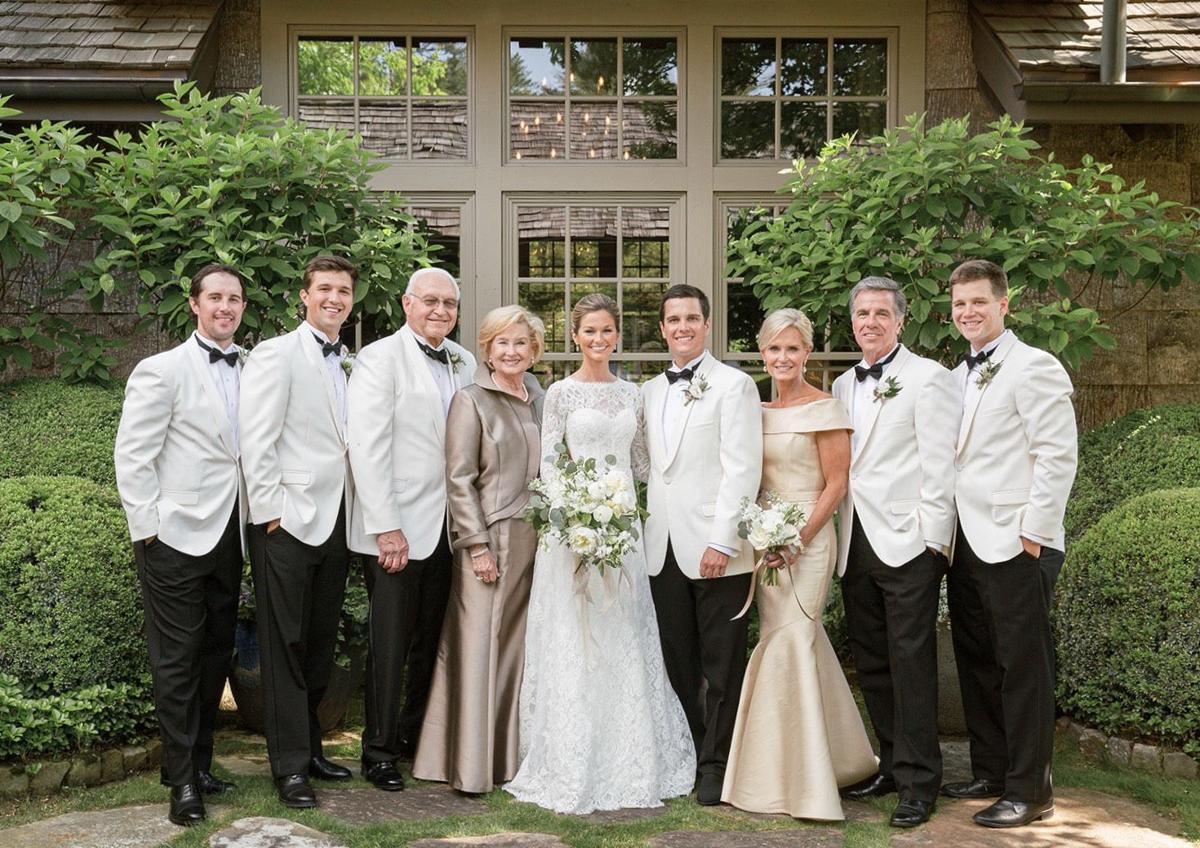 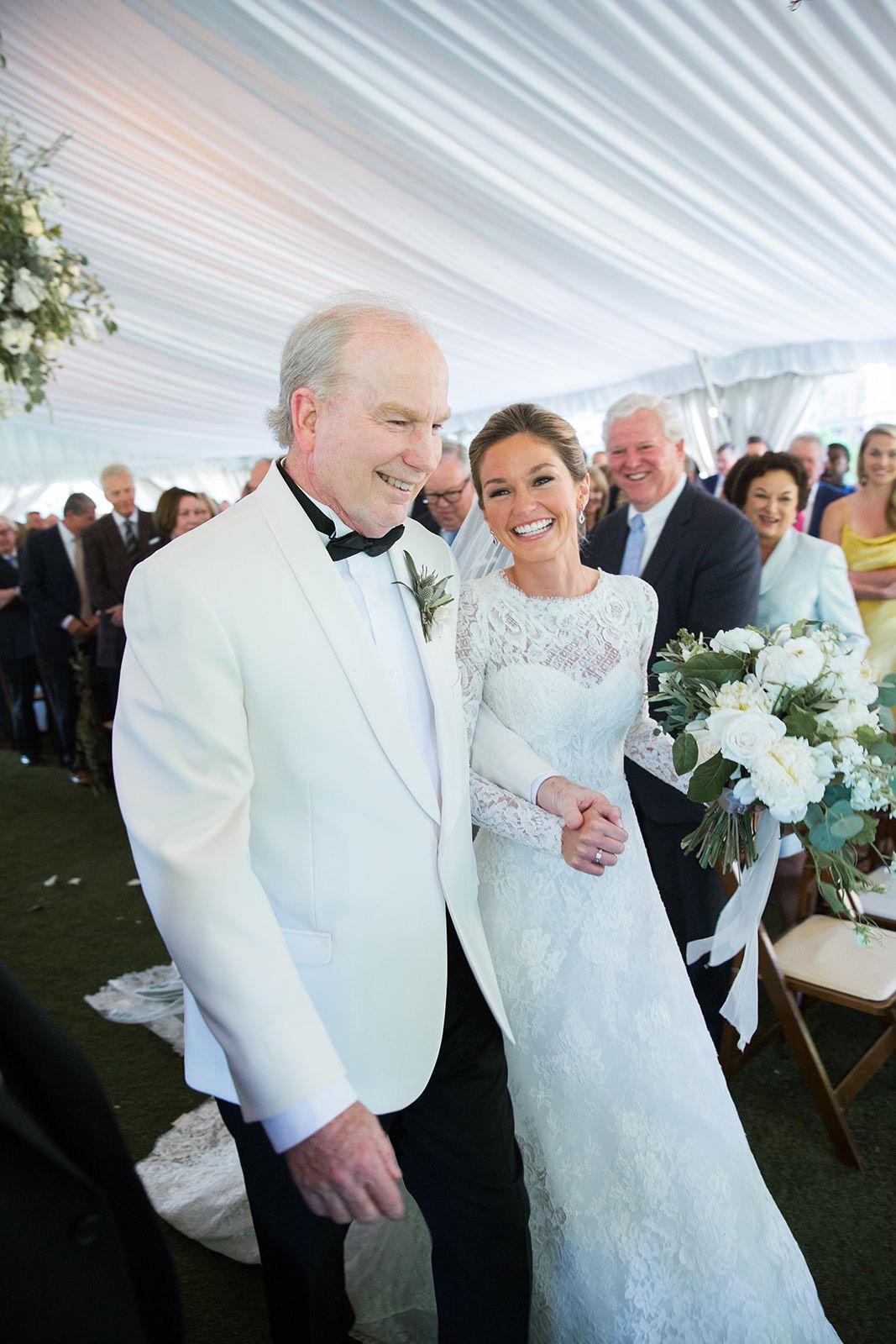 Father of the bride Thomas Harris escorts his daughter down the aisle. 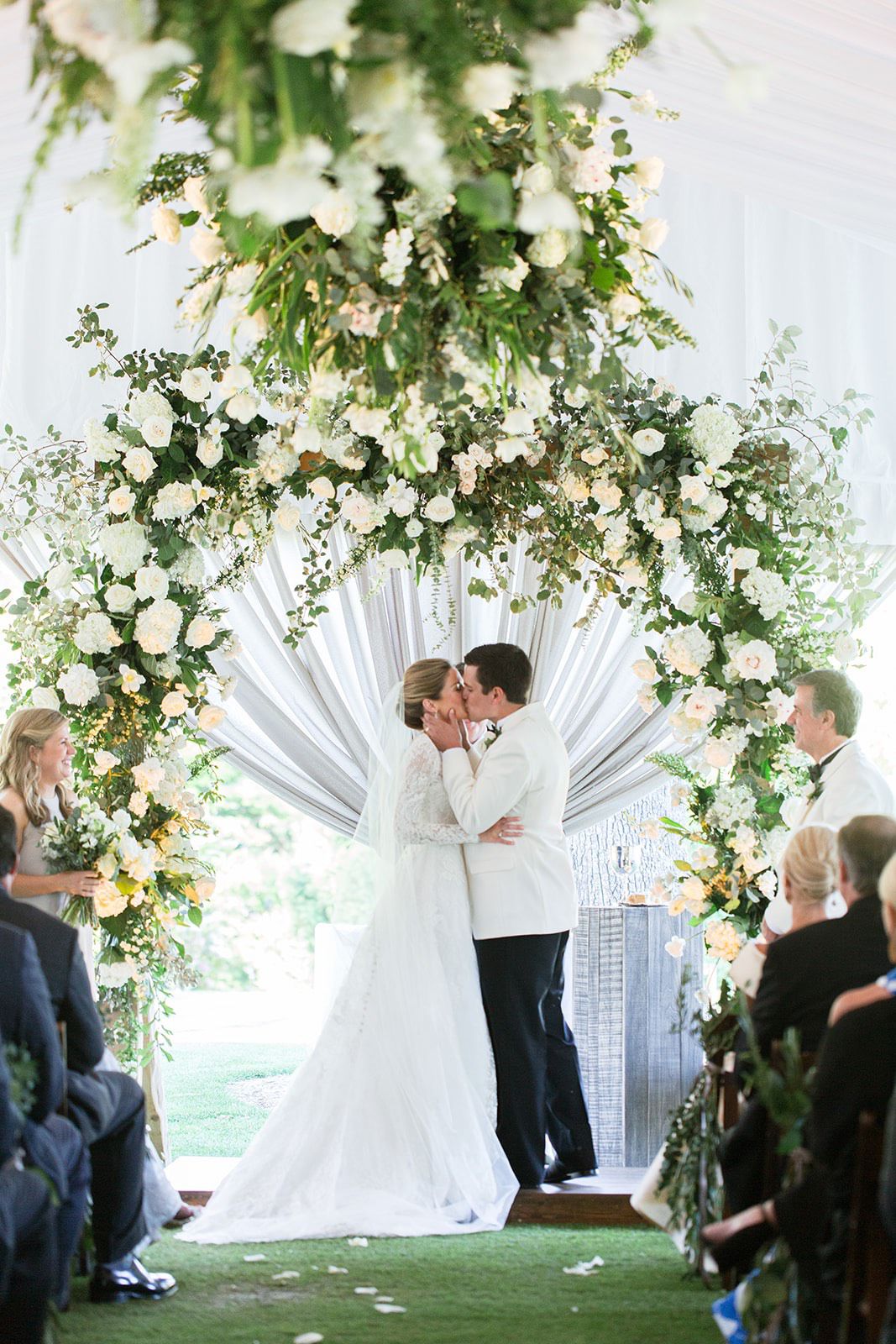 Sarah Reid and Alex were married under a flower laden tent surrounded by family and friends. 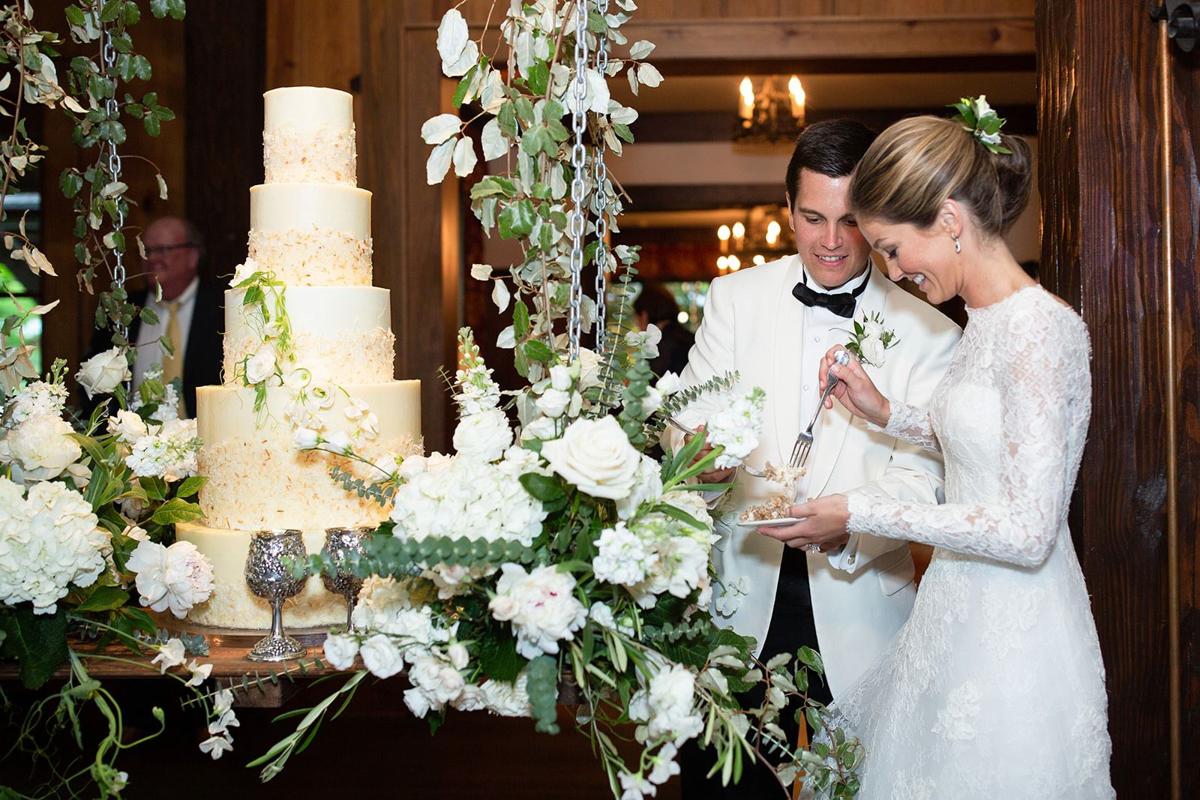 Father of the bride Thomas Harris escorts his daughter down the aisle.

Sarah Reid and Alex were married under a flower laden tent surrounded by family and friends.

Sarah Reid Harris and Thomas Alexander Harrison were married in Highlands, North Carolina on May 25, 2019 at 6:00 in the evening at Highlands Country Club.  Pastor Chris Hodges from Church of the Highlands in Birmingham, Alabama officiated the service.

After moving next door to each other their sophomore year at the University of Alabama, Sarah Reid and Alex began a 7-year dating adventure that encompassed them both graduating from Alabama, then moving on to a career in Birmingham for Sarah Reid and medical school in Auburn for Alex. Alex proposed to Sarah Reid before they both teed off on the number one tee box at The Country Club of Birmingham on the day before her birthday. The proposal was followed by a celebration of family and friends at the home of Mr. and Mrs. Tony Davis, where Alex had invited them under the pretense of a surprise birthday party.

Highlands Country Club offered a beautiful and sentimental setting for the couple’s ceremony. Sarah Reid’s family has had a home there her entire life and has spent her summers there with friends and family. Throughout their relationship, Highlands became a special place for the two of them, so it was only natural that they chose to be married there.

The guests were greeted by the traditional Highlander music of a bagpiper on the front lawn of the club. Once reaching the inside of the ceremony tent, the string music of Dean’s Duets provided a beautiful, serene setting for the guests and also for the procession of the wedding party.

The bridesmaid’s dresses were designed by Natalie Deayala. The silk dresses were a soft dove grey color that featured a high neck line and a straight silhouette. The color of the dresses complimented the color scheme that was carried throughout the wedding, from the entire paper suite to the favors at the ceremony.

The flower girl’s dress was made from the bride’s graduation dress worn at her graduation from The Montgomery Academy. Mrs. Florence Tyson transformed the dress into a beautiful dress that will be a treasured heirloom for the family for years to come.

The procession of the bagpiper alerted the guests of the arrival of Sarah Reid, escorted down the aisle by her father. Her Chantilly lace gown, by designer Monique Lhuiller, was an a-line dress with a natural waistline that featured long sleeves and a hand appliquéd skirt.  Her full-length veil was edged in a complimentary Chantilly lace.  She also wore a pair of sapphire and diamond drop earrings which were a gift from the groom.

The flowers for the ceremony and reception were done by Floressence Flowers from Brevard, North Carolina. In tones of green and white, the tent was transformed into a stunning outdoor venue. The entrance to the tent greeted guests with large arrangements of white hydrangea, peonies, spirea, tulips, garden roses, and ranunculus mixed with fern, eucalyptus, and olive leaf. At the altar, a wooden arbor was created and covered with a variety of the same green and white tones. Perhaps the most unique flowers in the tent were the three large flowing “flower bombs” that hung from the ceiling down the center aisle. Sarah Reid’s bouquet was a cascading arrangement of a combination of the flowers used throughout the wedding.  Included in the bouquet were two four leaf clovers for good luck and prosperity that were found at the family’s farm.  The bridesmaid’s bouquets were smaller versions of the bride’s bouquet, accented by silk ribbon that complimented the bridesmaid’s dresses.

Pastor Hodges performed a beautiful and meaningful ceremony, which included personal thoughts from both the bride and groom that they had shared with him. Their vows reflected upon their long relationship and how treasured those times have been. Sarah Reid and Alex also incorporated their first communion together as husband and wife in the ceremony.

Immediately following the ceremony, guests were beckoned into the clubhouse by the Motown music of Az Izz from Atlanta, Georgia. Chef Bryant Withers from Highlands Country Club provided a beautiful and delicious spread for everyone. Throughout the clubhouse, guests could dine on quail breast medallions, beef tenderloin, fried oysters, tea biscuits with ham, Conecuh sausage, or pimento cheese, Mini chicken and waffle cones, and lobster fritters. To accompany these dishes, they offered stuffed red potatoes, grilled asparagus, hoop cheddar macaroni, a hot crab dip and a wide selection of cheeses. The bars throughout the club featured specialty drinks chosen by the bride and a groom, an Old Fashioned for him and a Strawberry Runner for her.

The floral arrangements throughout the club that were created by Floressence were also done in classic tones of green and white, using the same floral choices as the tent. There was greenery flowing from chandeliers, and each corner of the large ballroom was flanked by flowers cascading from the rafters. The center buffet table held a towering centerpiece, with smaller arrangements on guest tables throughout the club.

The bride’s cake, designed by Sugar Cloud Baking Company in Cashiers, North Carolina, was created from the recipe of Sarah Reid and Alex’s favorite cake, the toasted coconut cake from Chez Fonfon in Birmingham. Floressence created a swing that hung from the rafters of the club, suspended by ropes covered in olive leaf, eucalyptus and soft white flowers.  Each slice of the cake was served with a drizzle of a delicious anglaise sauce, replicating the restaurant’s award winning cake. The groom’s “cake”, in honor of his love of Krispy Kreme donuts, was a sideboard filled with various donuts, surrounded by an abundance of greenery.

The bride and groom started the evening with their first dance to “Can’t Take My Eyes Off of You,” followed by the bride and her father, dancing to “What a Wonderful World”. Alex and his mother, Claudia, enjoyed dancing to “Days Like This.” Az Izz cranked up the tempo and the dance floor was packed the rest of the evening with friends and family celebrating the happy couple.

When the music died down, rose and eucalyptus petals were tossed from well-wishers as they departed the club in a vintage Mercedes convertible displaying another beautiful floral arrangement on its back.

On Friday night before the wedding, the groom’s parents, Ronnie and Claudia Harrison, hosted a splendid rehearsal dinner at The Farm at Old Edwards for the wedding party, family and friends. Floressence, once again, wowed everyone with the stunning floral arrangements. The focal point of the room was an overhead arrangement that covered the entire length of the head table with hues of coral, pink, cream, and green. Cocktails were enjoyed while a video ran with photos of the bride and groom throughout their lives that was created by the groom’s father, and everyone enjoyed the music of Sidecar Honey. Each guest was greeted at their place setting with a decadent white chocolate golf ball, paired with a chocolate tee in honor of the couple's love of golf. After a delicious dinner of beef tenderloin, sunburst trout, spring vegetables, creamed spinach, fingerling potatoes, white truffle Mac and cheese, and dark chocolate croissant pudding, the toasts began. As the last toast was lifted, guests strolled to The Orchard House at Old Edwards to welcome out of town guests arriving in Highlands for the weekend festivities. Hosted by friends of the bride and groom’s families, the late night party was a great opportunity for old friends to reconnect and start the celebration. It was an evening filled with lots of laughter, music and wonderful memories.

Before the rehearsal dinner on Friday, the bridesmaids and bride were honored at a luncheon hosted by the mother of the bride’s friends, Jane Albright, Tricia Dunn, Tammy Fine, Pat Moorehouse, and Molly Walker. The beautiful luncheon was held on the croquet court at Highlands Country Club; therefore, everyone was dressed in appropriate croquet white attire. With a blue and white motif, the flowers arranged by this amazingly talented group of women were stunning. After a lunch of chopped salad with shrimp and chicken, custom cookies from New Orleans, and a champagne bar, the ladies tried their skills on the croquet court. Tricia and Pat, along with Jennie Stowers, also hosted Sarah Reid and her bridesmaids on the day of the wedding to a day of absolute luxury at Jennie’s beautiful home in Highlands. There was an abundance of wonderful food and festivities for the ladies while getting ready for the big day. Meanwhile, the groom and his groomsmen were enjoying a round of golf and lunch at The Old Edwards Golf Club.

Sunday was a day to reminisce about the weekend festivities at a Farewell Lunch hosted by the bride's family's Highlands friends.  Held at a local bar, The High Dive, it was the perfect opportunity to bid the bride and groom farewell and to enjoy some good "day after" food. With barbecue, hamburgers, Mac and Cheese, miniature corn dogs, and plenty of hearty side dishes, no one left the plateau hungry. There were plenty of laughs, tears and memories that were shared.

After a honeymoon visiting Lake Como, Tuscany and the Amalfi Coast in Italy, Sarah Reid and Alex have moved to Tampa, Florida where Alex is in his residency in dermatology and Sarah Reid is working in the marketing department of the corporate headquarters of Raymond James.