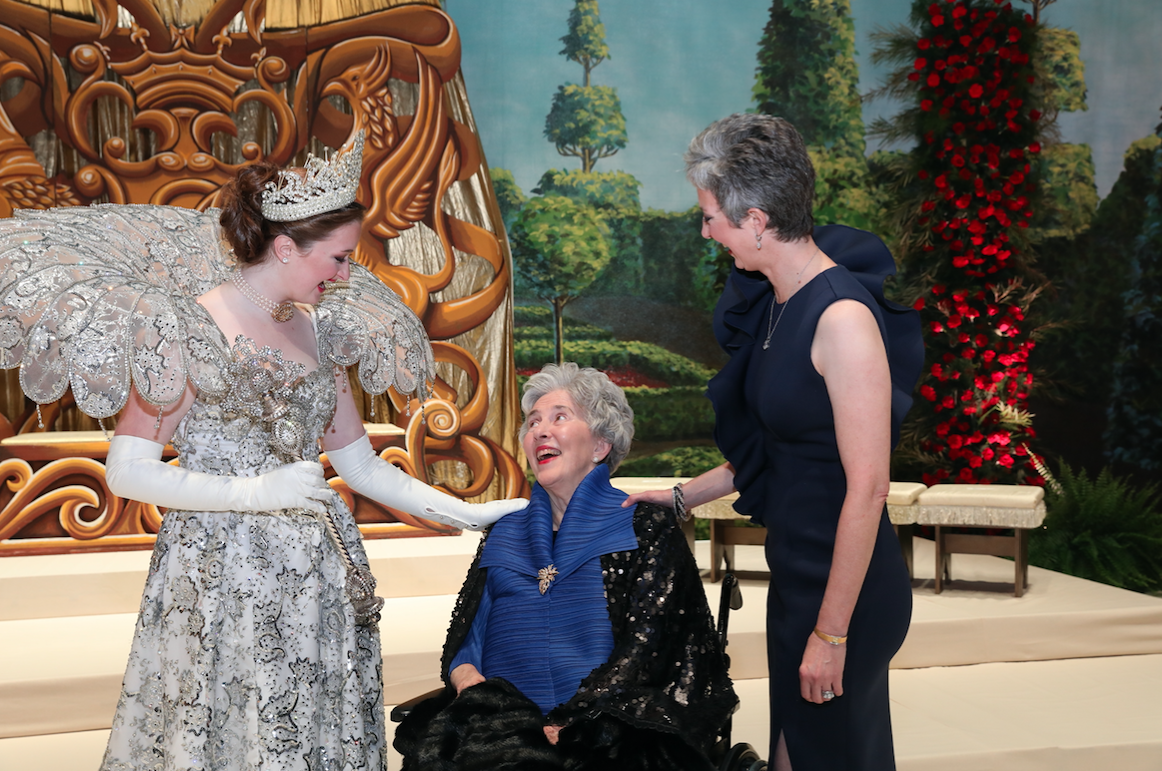 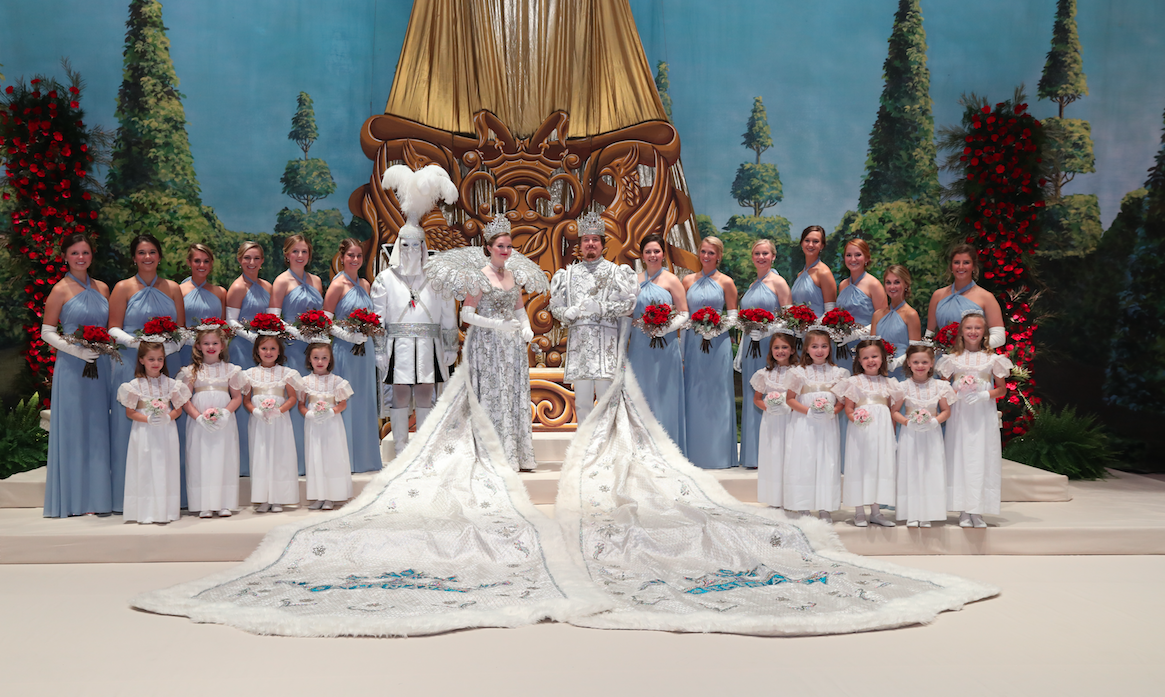 The King and Queen of the Krewe of Athenians with their Court. 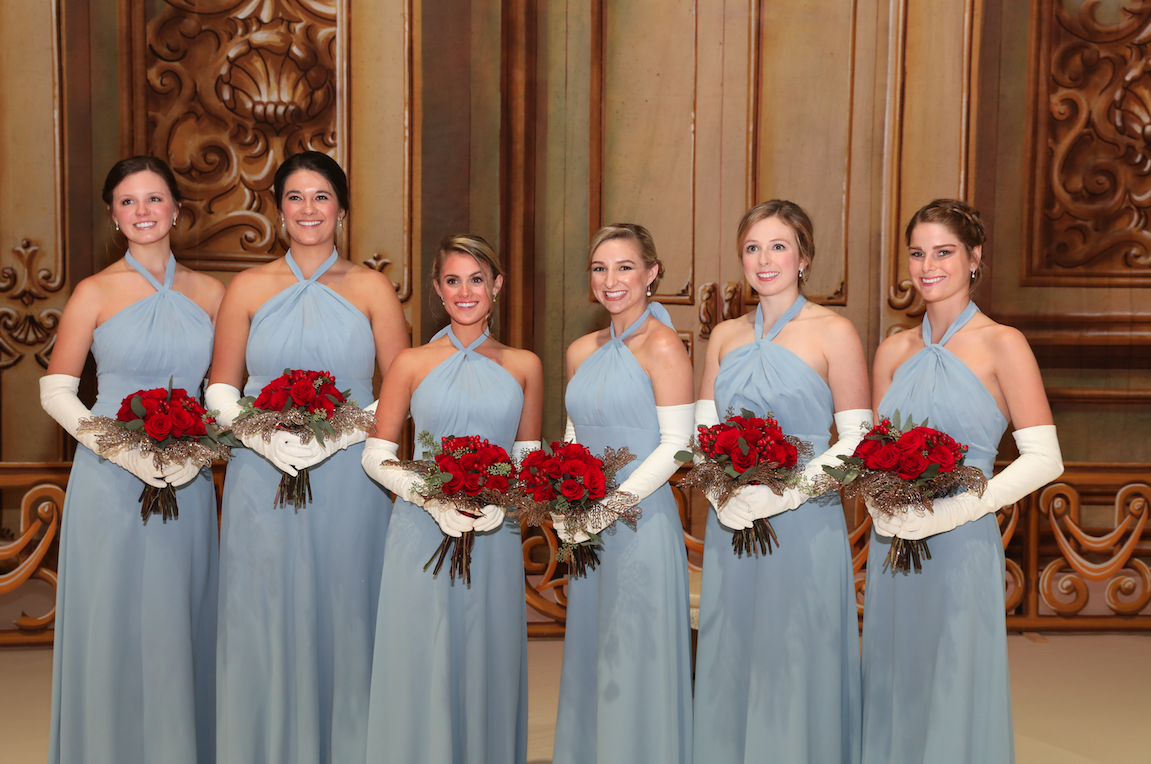 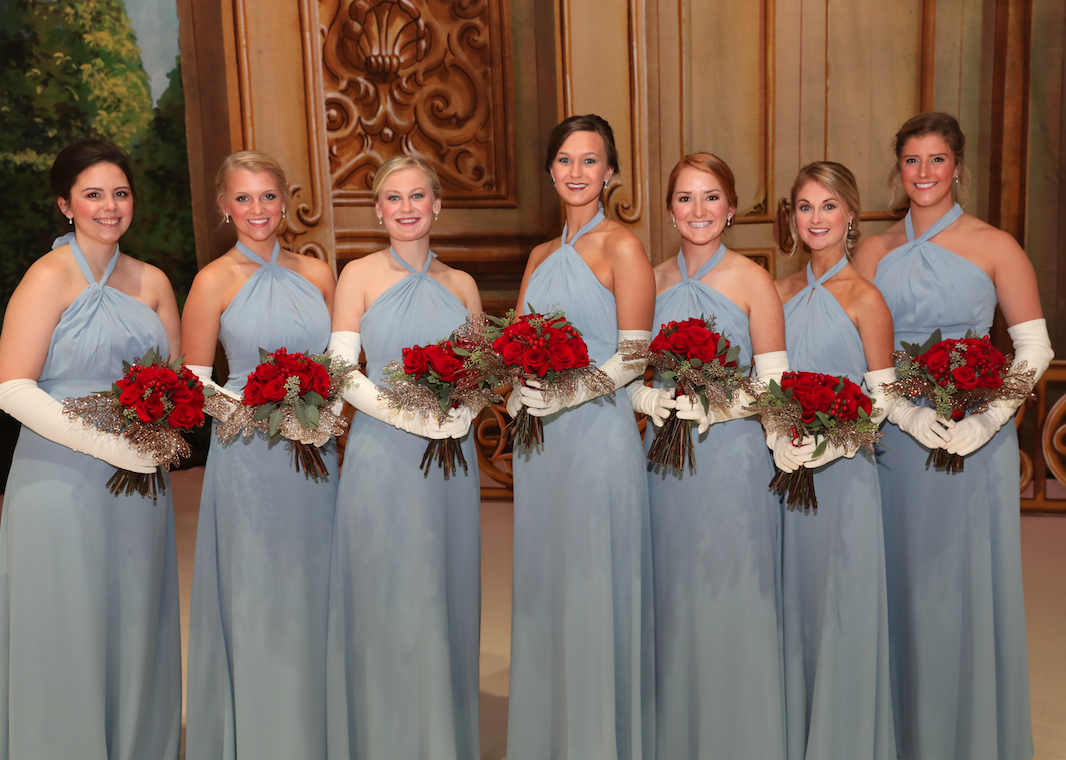 The King and Queen of the Krewe of Athenians with their Court.

On December 8th, The Montgomery Renaissance Hotel and Convention Center was transformed into royal courts, as The Krewe of Athenians celebrated its 69th Annual Ball. Reigning over the revelry was Queen Mary Elmore DeMott, following in the footsteps of her mother and grandmother, both of whom beamed through the evening’s festivities. Celebrating Montgomery’s first “Triple Crown,” the festivities began with a horserace of sorts, an entertainment featuring the Krewe’s new members exemplifying the complex attributes of today’s debutantes. In the end, tradition won out, followed by grace and charm.

The Co-chairmen of the Reception Committee, Mr. James Turner Inscoe, and Mr. Miland Fredrick Simpler, III, along with their crew of assistants, welcomed guests upon their arrival. The Floor Committee Chairman was Mr. Gregory Bryant Alford, who captained his own group of gregarious men.

The Stacey Coake Orchestra from Nashville entertained with a prelude of music until the Master of Ceremonies and father of the Queen, Dr. Miles DeMott, introduced the masked members of the Krewe as they came parading in with noisemakers and hoopla to begin the evening of revelry.

Following the “Triple Crown” tableau that included new Krewe members and the Dapper Dans, a barbershop quartet direct from Disney, the 2018 King of Athenians was revealed. Wearing an immense crown covered in jewels, the King sceptered to his guests and Krewe from the royal throne beneath the Athenian’s gold emblem. Amid golden chandeliers and candelabras, the throne was flanked by a pair of twelve foot columns made of gorgeous flowers. These stunning pieces were created by Al Cantrell of Al’s Flowers and included red explorer roses, red carnations and grevillea Ivanhoe as the greenery.

Joining the Queen’s court for presentation were:

Miss Savannah Olivia Elrod, daughter of Dr. and Mrs. Brian Wade Elrod, Presented by her father and Mr. Samuel Adams as her Committeeman.

Miss Annah Lawrence Peeples, daughter of the Reverend and Mrs. David Hale Peeples, presented by her father and Mr. Michael David Beringer as her Committeeman.

Each maid was presented in turn, sharing the spotlight with both presenters and lieutenants, and greeting the assembled patrons with a smile and a curtsy. The maids of the court each wore each wore a cornflower blue chiffon dress with a halter neckline designed by Jasmine Bridal and coordinated by Denson’s Bridal. Each maid carried a bouquet of ruby red finally roses atop true romance coffee bean and umber colored fans of glitter, all tied together with medori ribbon.

As a brass fanfare filled the Convention Center, one more debutante began her promenade around the ballroom floor. Her appearance was a much anticipated highlight of the weekend and the 2018 Queen of Athenians, Miss Mary Elmore DeMott, was enchanting as she greeted the Krewe, the Court and her guests.

The Queen’s gown and collar, worn by her mother, were designed for the 1988 ball by Carter Church, of New Orleans, along with the matching King’s attire. They featured heavily beaded fabric with large rhinestone motifs and Swarovski crystals that sparkled in the spotlights. Jay Herring of Mystick Couturier in Wetumpka, Alabama updated the royal gown for this year’s queen and also created the matching Athenians royal mantles of silver damask with white fur displaying the Krewe’s crest that were worn by the royal couple. Of special significance was a family broach worn at the ball by this year’s Queen. Originally owned by her great-great-great grandmother, Laura Croom Hill, it had been buried for safekeeping along with the family silver and other jewelry during the Civil War. Like the crown, this jewelry was worn by the mother and grandmother of the Queen.

As Queen Mary Elmore walked across the ballroom floor, she was followed by nine lovely little girls, the Princesses of the Court. They made their curtsies to the assembled crowd wearing delicate crowns made of seed pearls and held nosegays of miniature princess pink roses and mini baby’s breath created by Al’s Flowers.

The Princesses of the Court were:

The princesses greeted the King and Queen in heirloom dresses made from an antique Sarah Howard Stone design. The beautiful round yoke was made with a French Maline lace and puffing of Swiss Batiste. The top was also adorned with Swiss embroidered organdy angel sleeves and ruffles. The back was enhanced by beauty pins and a satin sash. All of the French laces and Swiss embroideries had delicate rose pattern to honor the theme of this year’s Athenian’s queen. The dresses were designed by Suzanne Davidson and created by Leah Jones and Courtney Albrecht.

At the conclusion of the presentation, the King and Queen led the enthusiastic court on a Grand Promenade, waving scepters and brilliant smiles as the full complement of maids and lieutenants encircled them twice before all returned to the throne. Once assembled, the full court was a majestic sight, indeed, with the cutest princesses flanking both the King and the Queen and the beautiful maids, framed by the colorful lieutenants, gracing either side of the throne. The orchestra then struck up the dance music and an evening of revelry was at hand and it didn’t even slow until the clock struck midnight.

Queen Mary Elmore enjoyed the weekend festivities with a group of her friends from Vanderbilt University along with her escort, William Chandler, who attends Sewanee. Prior to the ball weekend she hosted a Princess Party at Castle DeMott for royal high tea that included crown shaped peanut butter and jelly sandwiches, princess pink goldfish and sparkling cupcakes topped with crowns. The girls drew pictures for their king and enjoyed curtsey lessons from 2010 Athenians Queen, Liza Cardinal Simpler.

129 Coosa was a wonderful venue for the Friday night celebration to honor the visiting members of the New Orleans Athenians. Traditional Christmas décor including wreaths, a trimmed tree and gold accented pine and magnolia centerpieces put guest in the holiday spirit. In festive attire, guests dined on Bloody Mary shrimp cocktail shooters, sweet tea marinated pork loin, fried chicken sliders with Wickles, BLT crostini and more. It was a relaxed night of fun and a fitting prelude to the eventful day ahead.

On the day of the ball, the Queen Grandmother, Elmore Inscoe, along with aunts Allison Chandler and Ashley Inscoe, hosted a royal luncheon to honor the Queen at the Capital City Club where the fun began on entry as people were given fascinators made for the occasion with the help of Margaret Chandler, Mary Elmore’s first cousin. Maids of the Court and other honored guests wore their derby best for the event and placed their bets on a winning Triple Crown evening. Thanks to the queen’s grandfather, Jim Inscoe, and the talent of Sarah Spratling, tables featured flowers in silver julep cups engraved from the debutante season of the Queen Mother, Elmore DeMott. On the derby themed menu were Kentucky Hot Browns, mint julep cupcakes and chocolate bourbon pecan pie.

At the conclusion of the ball, the Queen invited family friends from near and far to join her for roses and revelry at Escapology where the Dapper Dans, serenaded guests as they walked through the doors adorned by glittered horse heads with crown topped red rose manes. Once inside, majestic arrangements of exotic red ginger, pink iced protea, and three varieties of roses in tall silver vases were part of the perfect prize winning decor by Jennifer Riley and J.Riley Designs. Guests enjoyed signature Triple Crown cocktails from the Kentucky Derby, the Preakness Stakes and the Belmont Stakes.

More roses, sparkle, and diamond shaped jewels were on the tables where guests enjoyed the delicious meal by Jennie Weller Catering. It featured praline bacon jambalaya shrimp and grits, egg soufflé, apricot almond coffee cake and hot buttered rum. Dancing to some of the Queen’s favorite tunes capped off the evening in a festive space where the official portraits of the “Triple Crown” queens decorated the walls.

The last leg of the “Triple Crown” was held at the Montgomery Country Club on Sunday. Guests at the King’s brunch were greeted at the front door with a life-size horse draped in the Derby winner’s blanket of red roses and an Athenian banner. Upstairs, Sarah Spratling adorned the tables of the grand ballroom with silver trophies each containing an arrangement representing the specific flower used for the winner’s garland: Red Roses for the Kentucky Derby, Black-Eyed Susans for the Preakness and White Carnations for the Belmont Stakes. Some guests were seated at tables anchored with tack boxes placed on a turf of green moss. Each box represented a different Triple Crown winner and was hand-painted by Susie Wilson in the design and colors of the thoroughbred’s racing silks. Table signs explained the background of racing silks and the history of that horse. The head table was decorated with swags of red fabric with garlands of the Triple Crown flowers and gold crowns.

The LaRoy Bodiford Group played festive jazz as guests sipped Mint Juleps, Bloody Marys and other libations and enjoyed passed Hors d’oeuvres of open-faced Benedictine sandwiches and miniature Kentucky ham biscuits during the cocktail hour. The call of “Riders Up” signaled the guests to take their seats as the King, Queen and the maids processed into the ballroom to “Pomp and Circumstance.” After the King welcomed his guests, the Derby day brunch began with a salad of mixed lettuces, green apples, pears, dried cranberries and candied pecans, a traditional Louisville Hot Brown with asparagus and Kentucky Derby pie. After dining, champagne was poured for all to join the King in toasting his Queen and the maids of the court. He expressed his gratitude to the ball Captain and the Krewe for a wonderful ball. The toasting continued with speeches from the Queen and Ball Captain before the revelers went on their merry way!