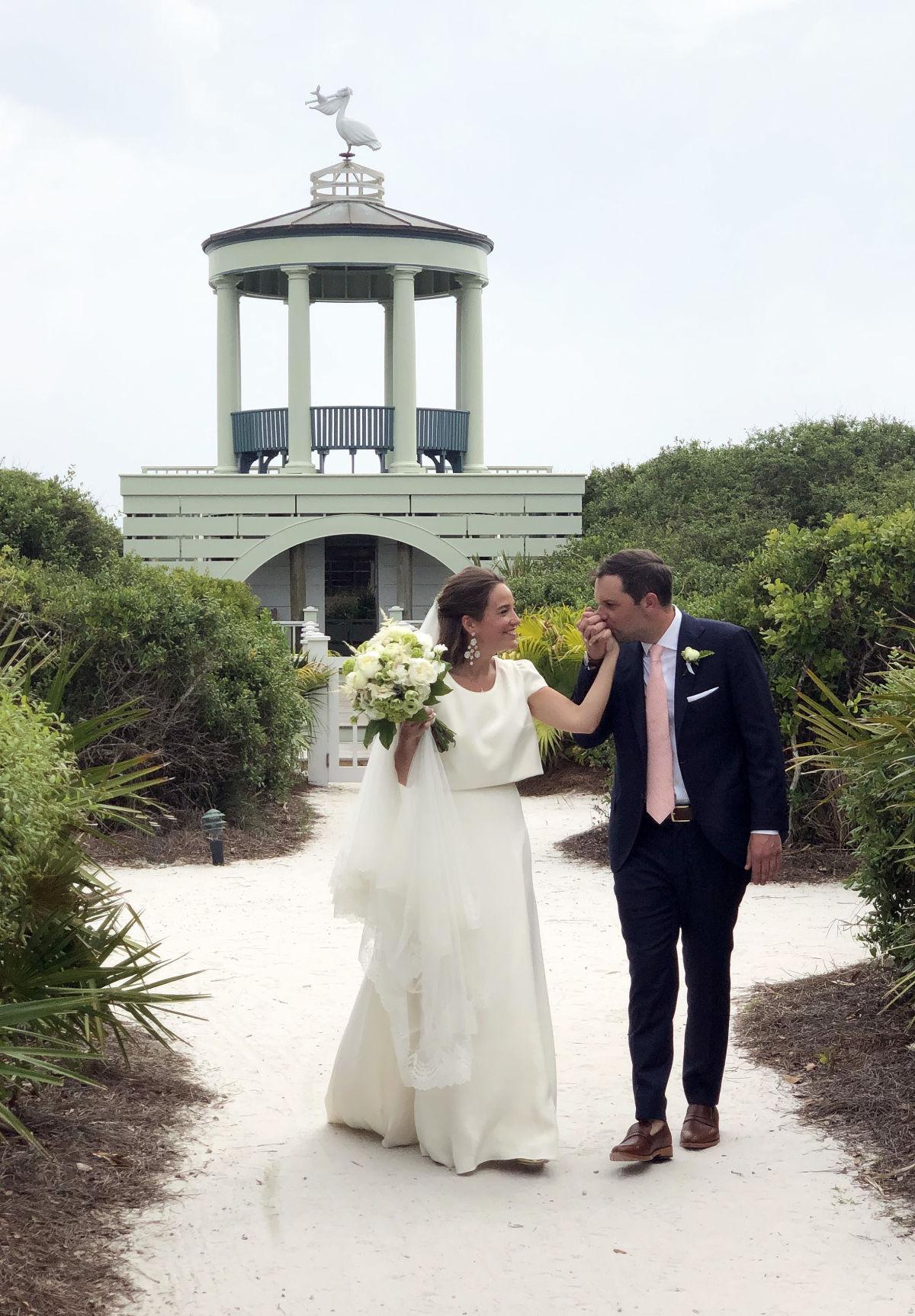 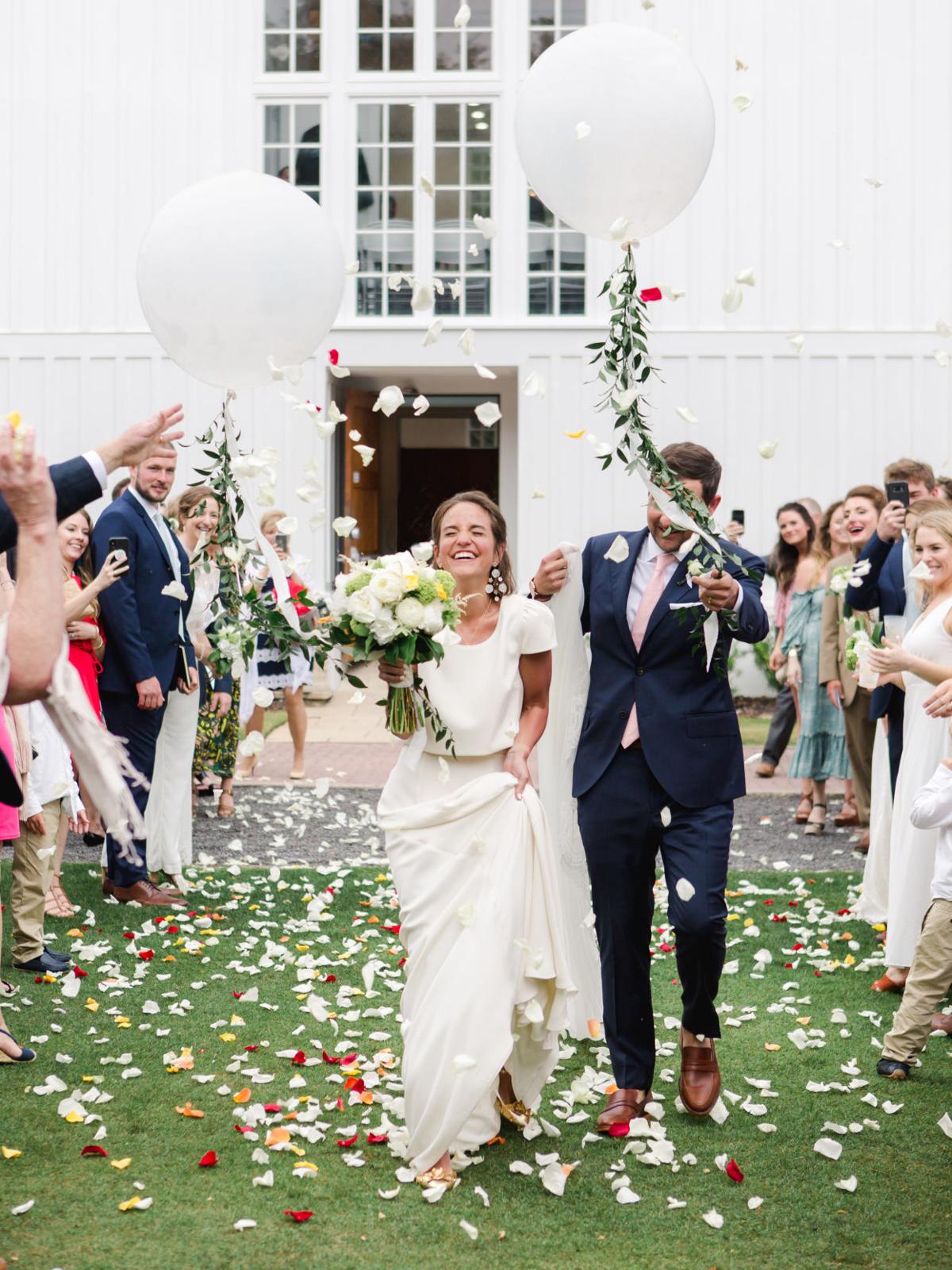 Flower petals and bubbles swirl around Mary Elizabeth and Scott as they leave the Seaside Chapel. 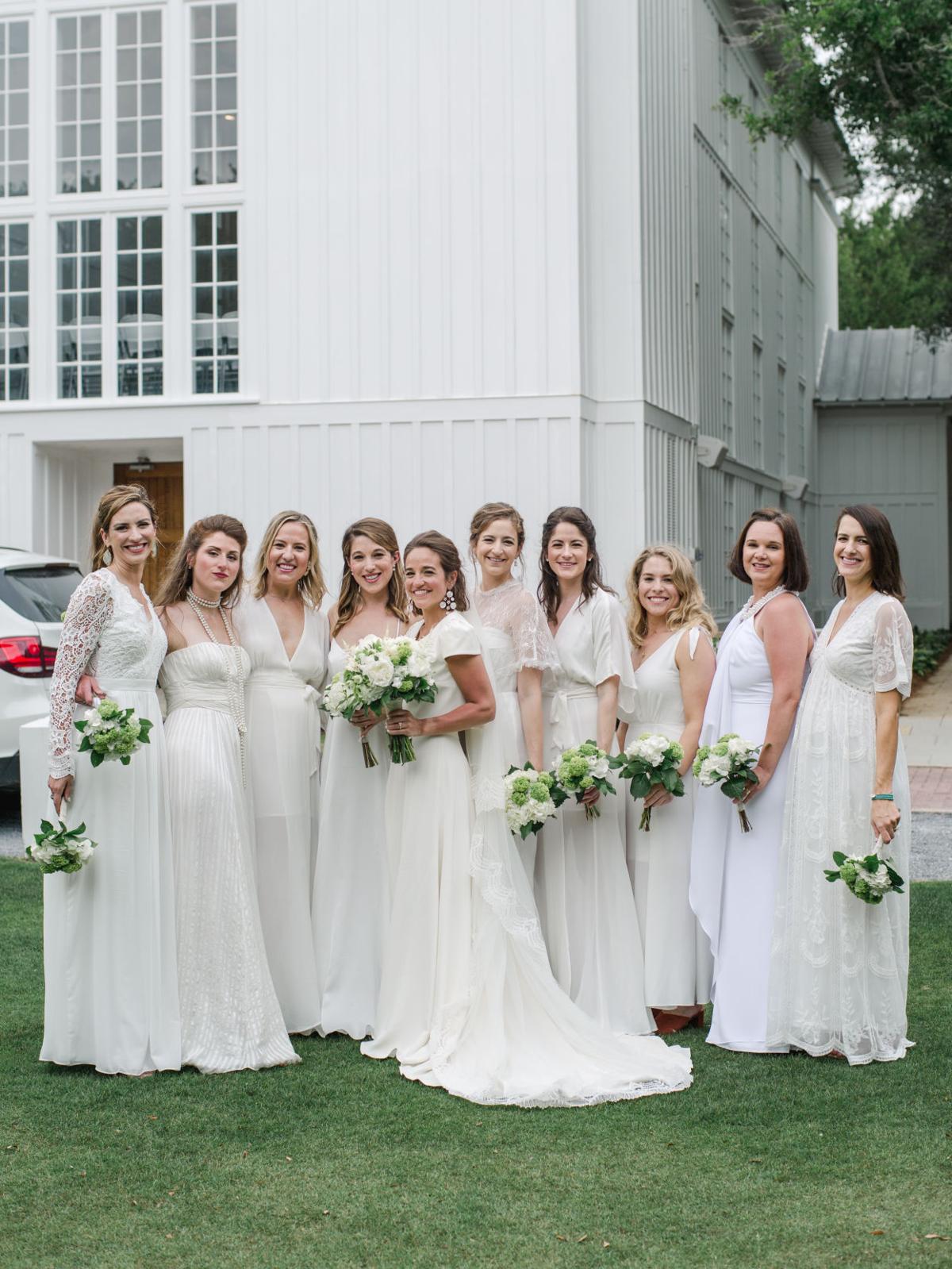 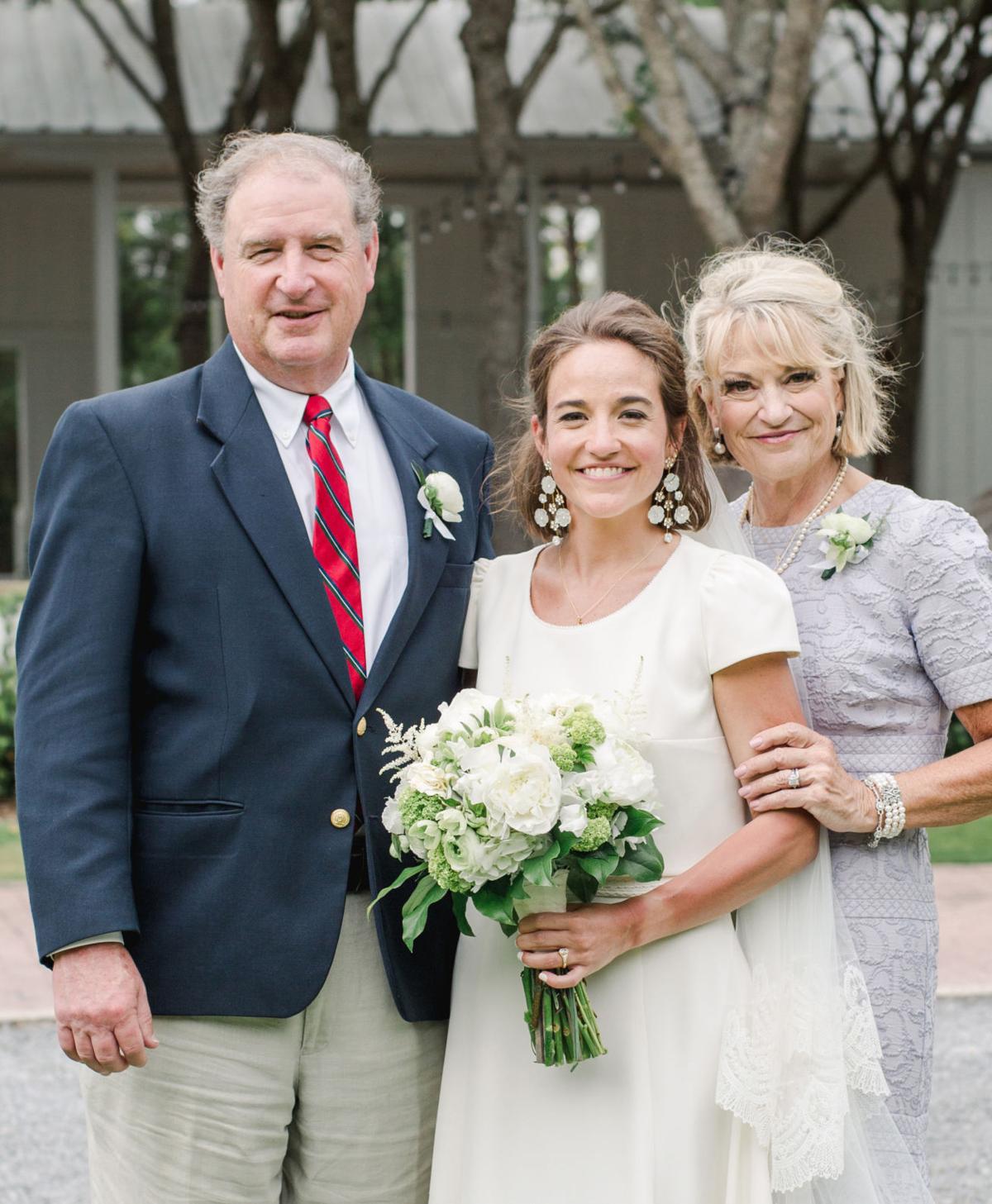 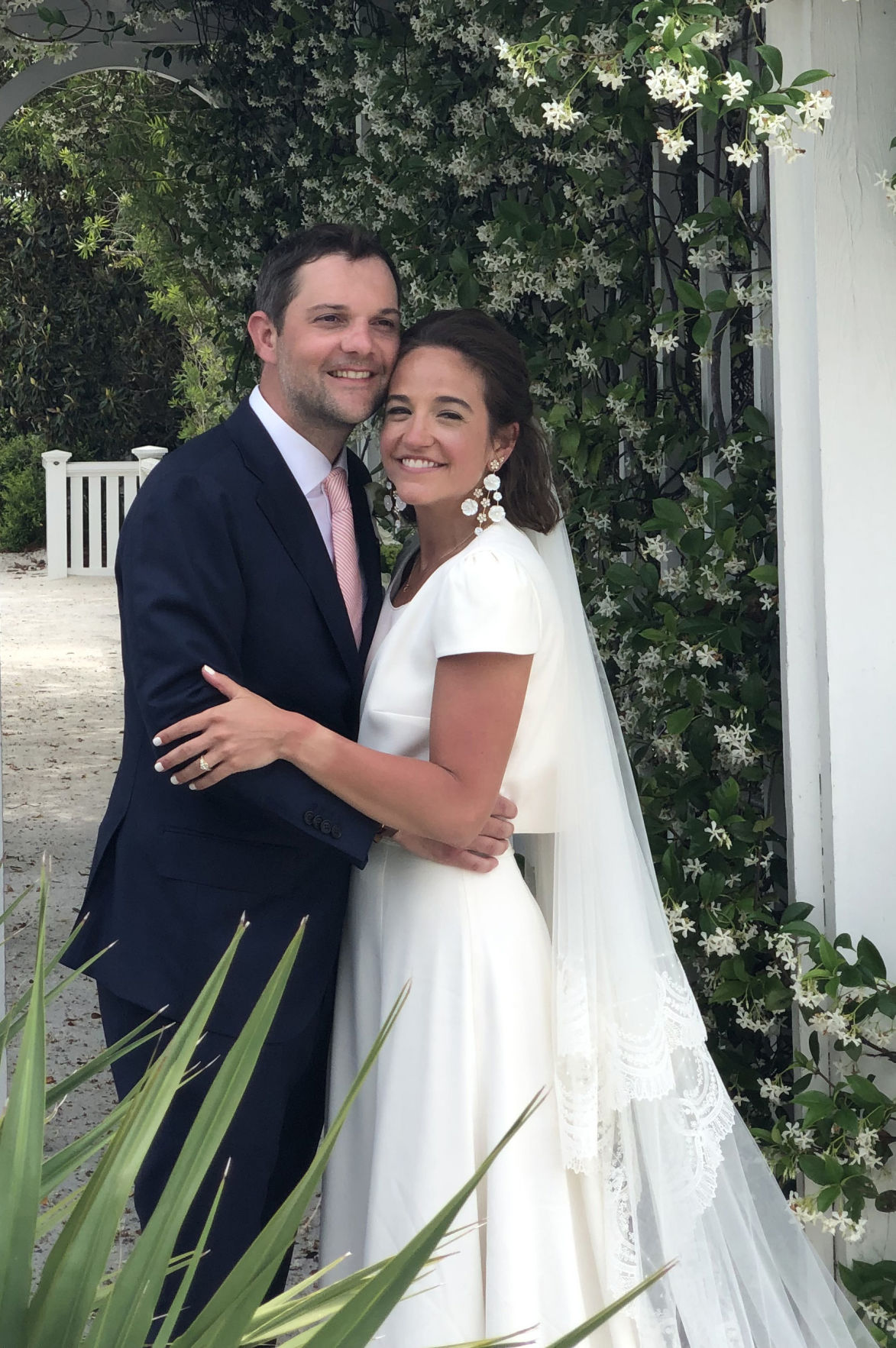 Mary Elizabeth and Scott on one of the many sandy paths in Seaside. 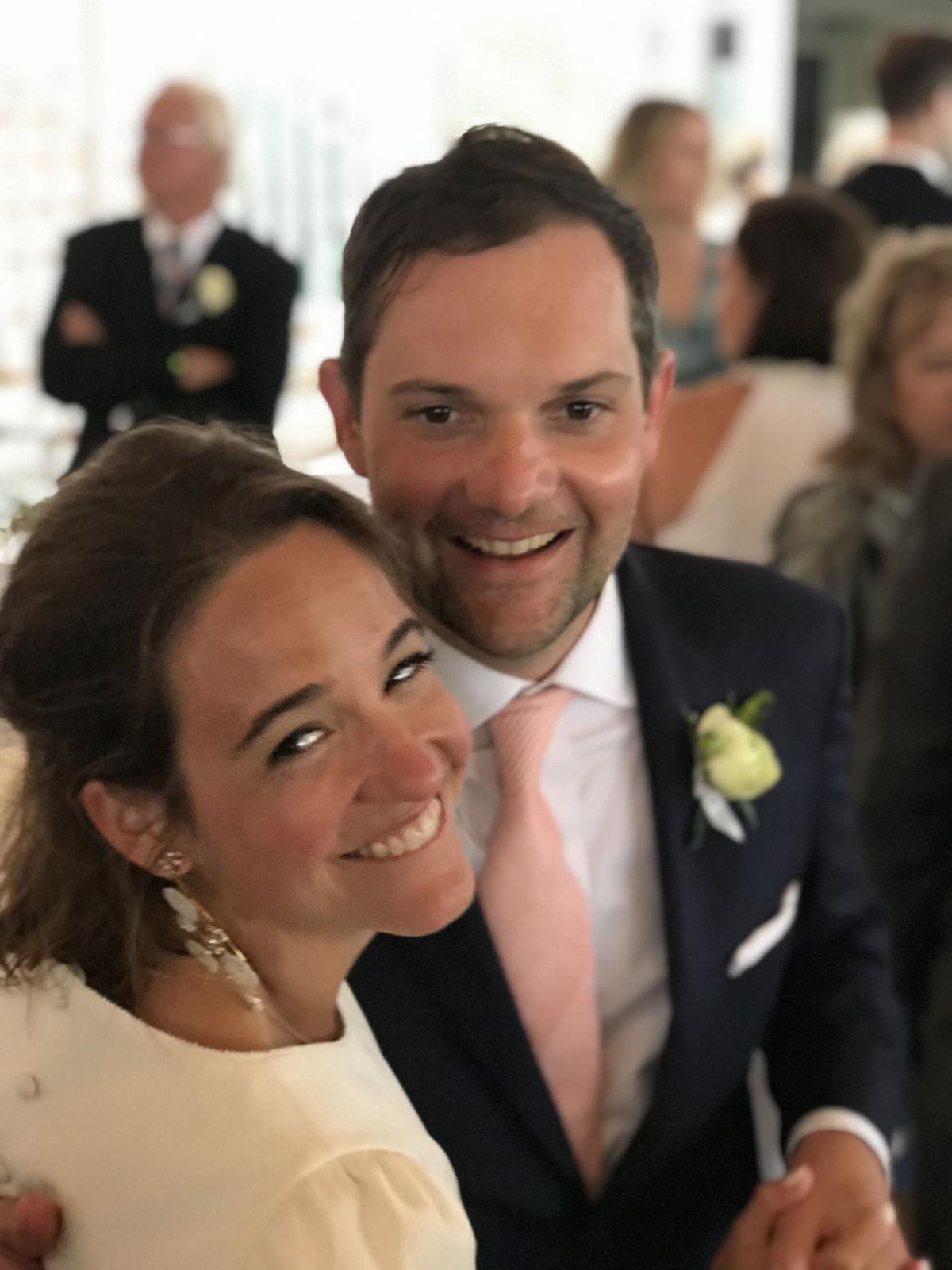 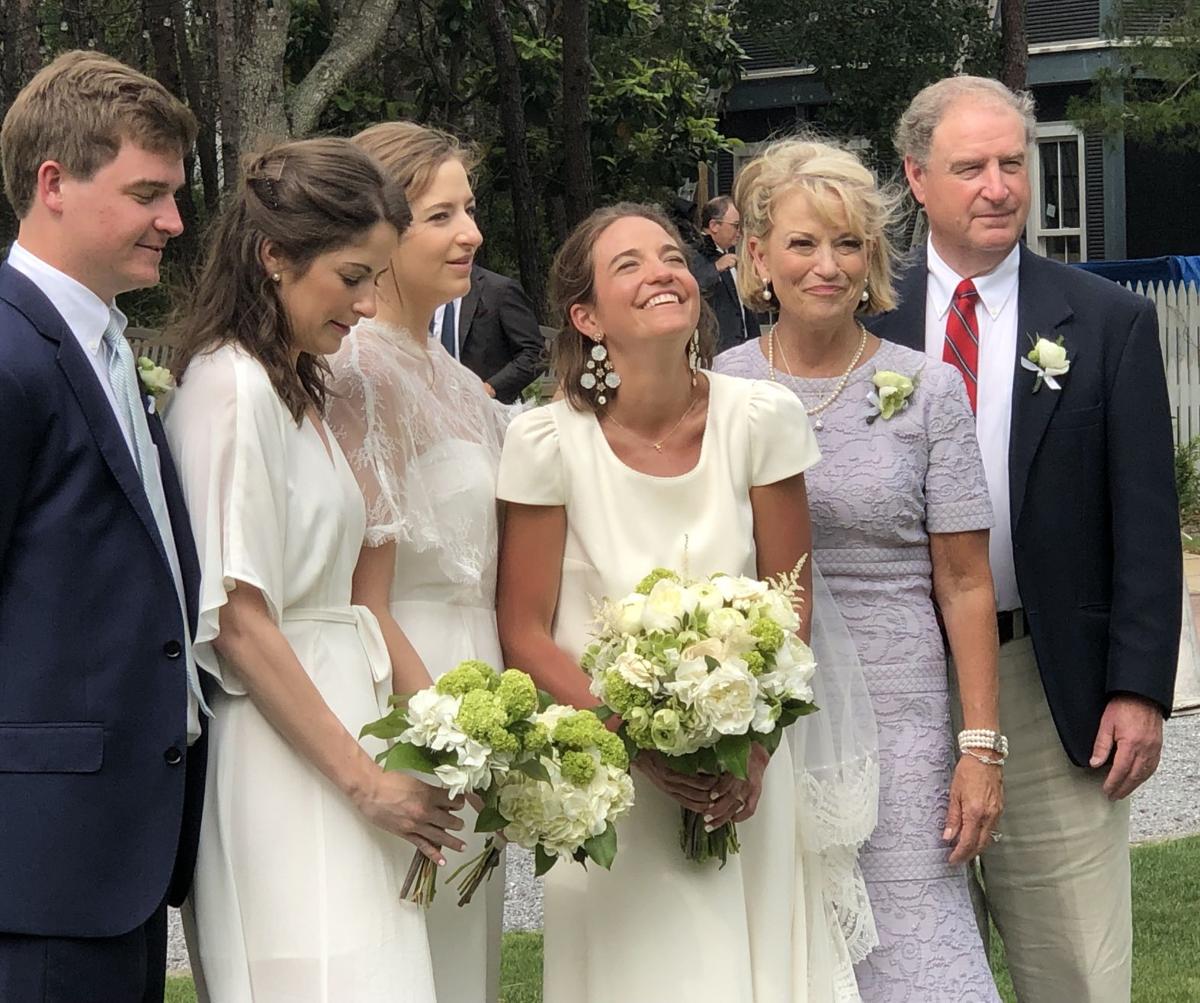 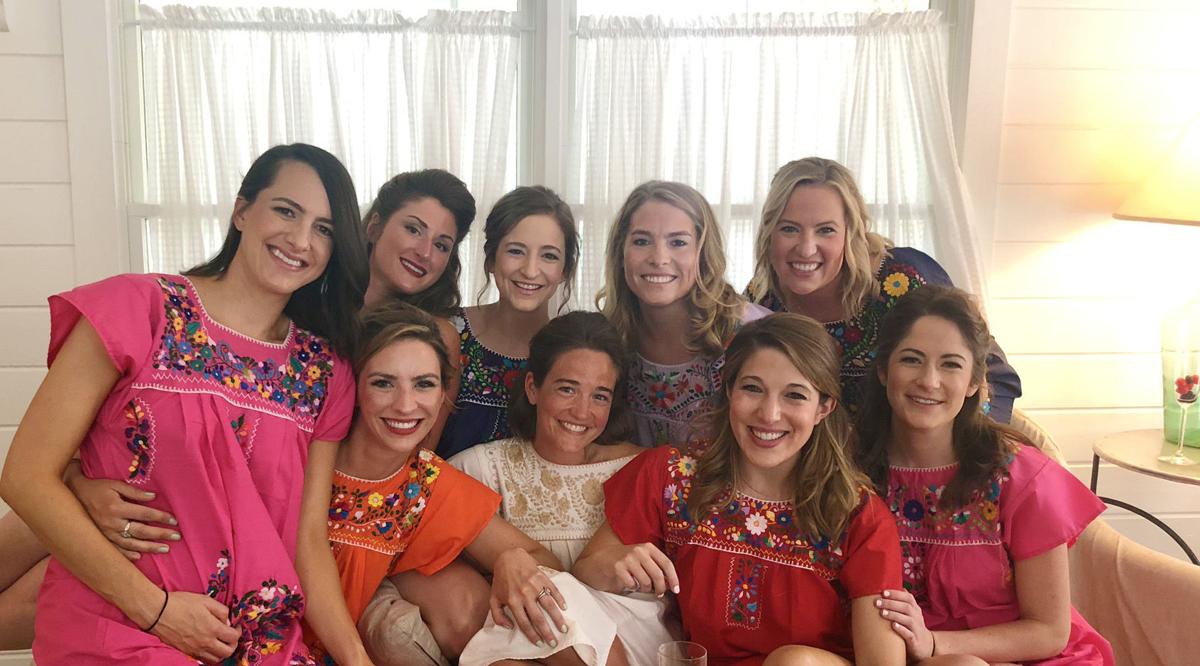 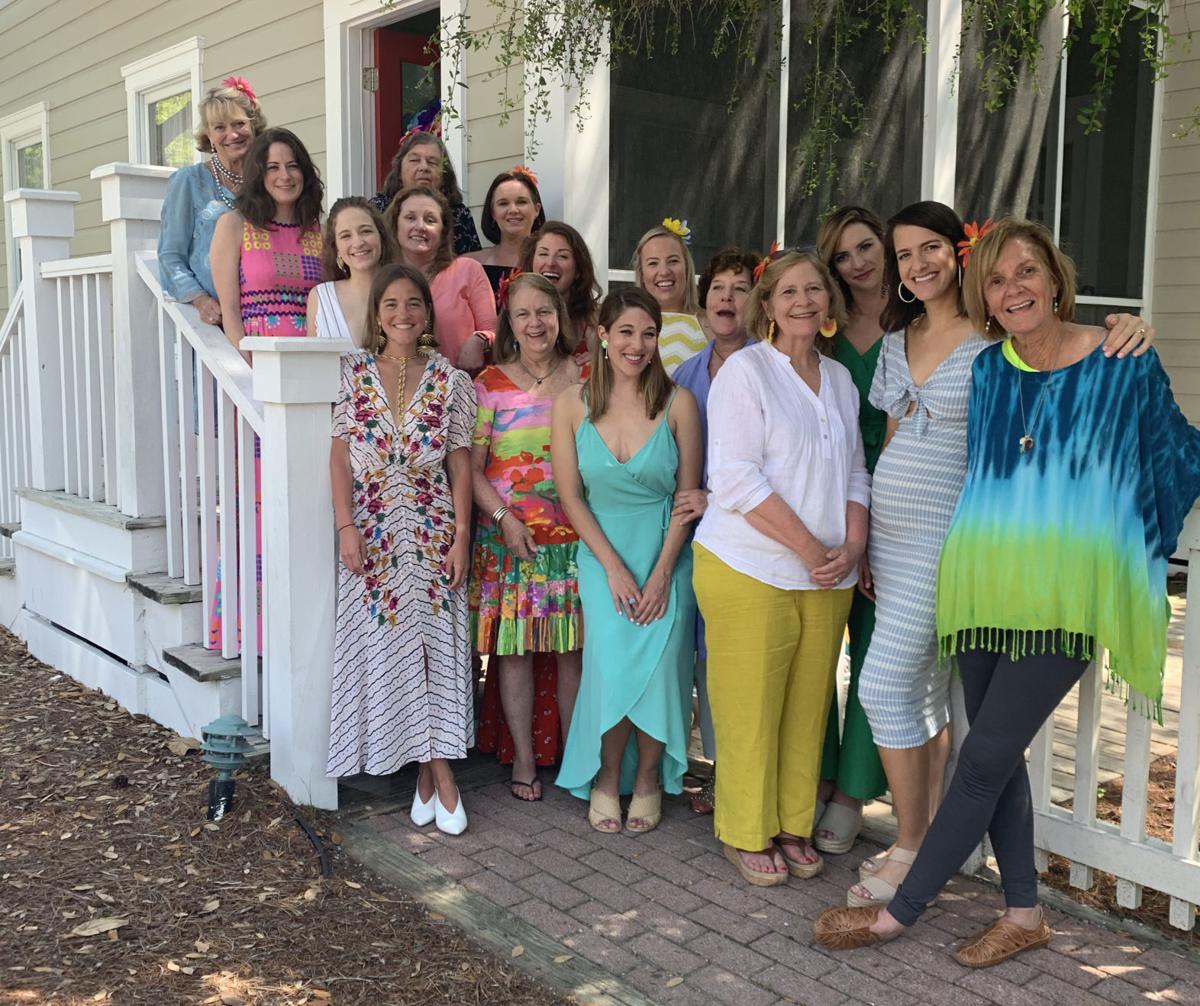 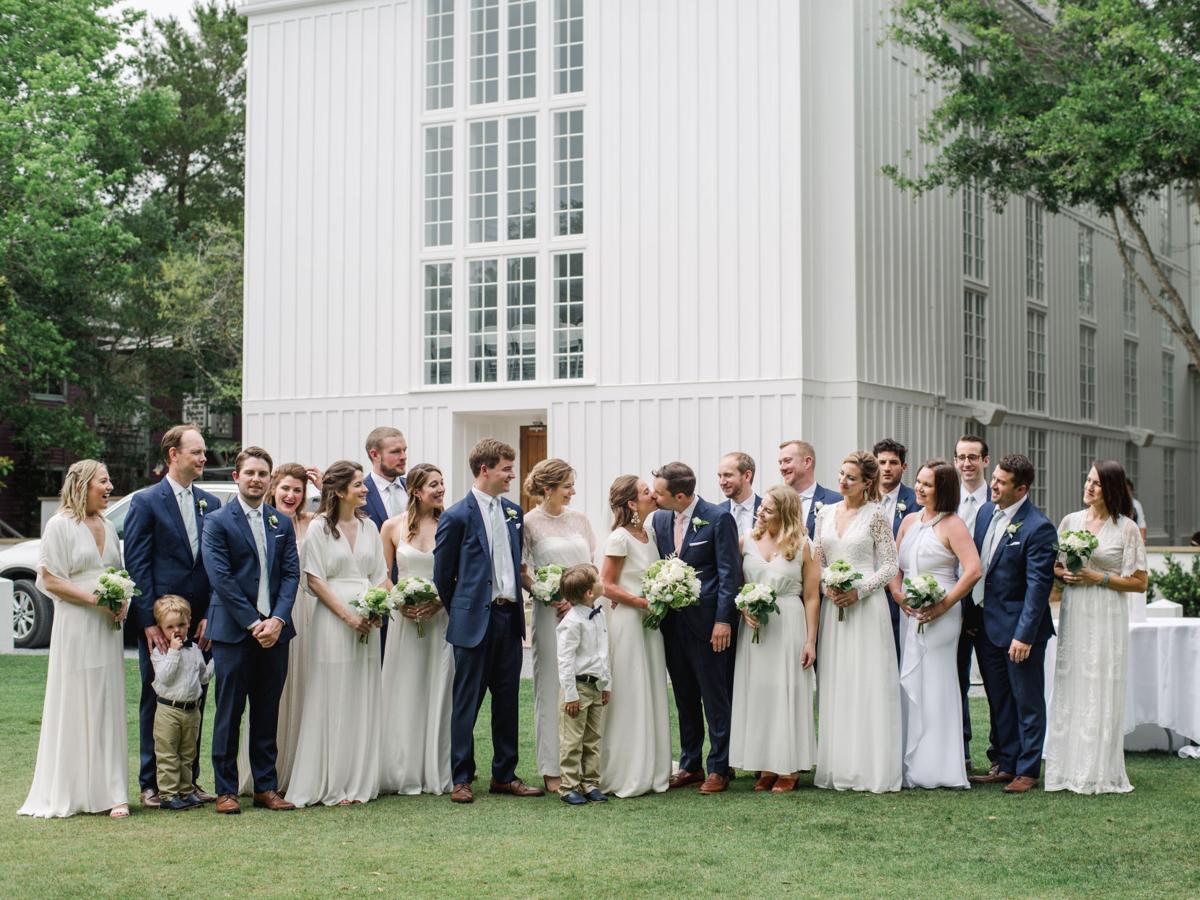 Flower petals and bubbles swirl around Mary Elizabeth and Scott as they leave the Seaside Chapel.

Mary Elizabeth and Scott on one of the many sandy paths in Seaside.

The wedding of Mary Elizabeth Adams and Scott Stephen Grant was celebrated beside the beautiful waters of the Gulf of Mexico on May 4, 2019 in Seaside, Florida.  Pastor Gary Wingo officiated the 4 o’clock wedding.

Mary Elizabeth is the daughter of Mary and Sam Adams of Montgomery, and granddaughter of the late Dr. and Mrs. Ralph W. Adams of Troy, Alabama; and the late Mr. and Mrs. Charlie M. Martin of Enterprise, Alabama.

The bride is a graduate of Montgomery Academy and the University of Alabama with a degree in English. She was a member of Kappa Kappa Gamma Sorority.  After graduating from the University, Mary Elizabeth spent two years in Spain teaching English in public and private settings, before moving to New York City where she presently works for One Drop, Inc. in Manhattan.

Scott is the son of Susan and Stephen Grant of Farmington, Connecticut and the grandson of Sarah A. Roberts and the late James E. Roberts, and the late Mr. and Mrs. Sherman R. Grant.

The groom is a graduate of Canterbury School in New Milford Connecticut and the University of Colorado at Boulder with a degree in Advertising and Design. He works as a digital product designer in New York City.

The afternoon wedding took place at the Seaside Chapel in the heart of the Seaside community. Delicate floral bouquets of pearl white, cream accented with lime green hydrangeas adorned the pews. Magnificent arrangements of white roses and hydrangea and emerald green orchids, accented by petite Kelly green hydrangea, bordered a gracefully simple altar. On the altar sat a quiet three branch crystal candelabra used to symbolize the joining of two souls as one under the guiding light of Christ.

Parisian designer Laure de Sagazan created Mary Elizabeth’s two-piece gown.  Details include pouf sleeves, a high neckline and pearl buttons accented by a cut out back. She wore a special gold cross from her mother.  The sophisticated and sleek bridal gown was enlivened head to toe by surprising and playful accents chosen by the bride who wore Jennifer Behr earring of large white flowers and Dolce & Gabbana golden leather Mary Jane pumps embellished with floral baroque jewels and studs.

Pages Cy Sterner and Anderson Sterner heralded the commencement of the ceremony as they brought garland laden balloons down the aisle preceding the bride and her father. They were accompanied by Cam Ray, piano and Chun-Hisn Chang, cello, playing selections from Bach, Handel and Beethoven.

Maid of Honor Sarah Ross Adams read Bible scripture from the books of Romans and Song of Solomon, and Bridesmaid Katherine Ann Stewart read The Ivey, a poem by William Carlos Williams.

After the vows and rings were exchanged, the unity candle was lit by the bride and groom signifying the eternal bond of Christ's love for them and their love for each other.

After the ceremony, the newlyweds were showered with a profusion of flower petals and bubbles as they exited the church and gathered with their family and friends on the church lawn for champagne.

Mary Elizabeth and Scott and their wedding party gaily promenaded from Seaside Chapel through the town to Bud and Alley's Restaurant for an incredible post wedding reception by the ocean, which began with flower-filled champagne and donuts for appetizers.  The gale force wind and rain that appeared just as Scott and Mary Elizabeth walked through the door to their reception was no match for the joyful festivities. Guests sheltered in place during the storm and happily sipped champagne and nibbled appetizers, delivered by the windblown wait staff. Soon the storm relented and delicious fare of surf and turf arrived to be enjoyed by the guests and wedding party.  The Unknown Band (TUB) of Birmingham put on a fabulous show that included the customary first dances and some raucous rock and roll.  During a pause in the music, Mary Elizabeth's father, Sam, placed a six pence in her shoe symbolizing an old Scottish tradition that guarantees good health, wealth and prosperity of every kind.  Later in the evening the couple made their grand departure from the celebration in her granddaddy Ralph's famous Chevy II Nova that had been completely restored for the wedding.  The crowd tossed rose petals along the path to the getaway vehicle and raised their Bubble Light Sabers chanting "May the Fourth Be With You," a reference to the "Star Wars" movie series and their wedding date.

The Seaside setting for Mary Elizabeth’s wedding was the perfect choice as the bride grew up spending every summer of her youth on 30A in the Seagrove Beach cottage her grandparents purchased in the late 1960s. The Adams family and their friends have been summering and playing in this idyllic spot on the Gulf Coast for years and years, and gather there still.

The Rehearsal Dinner, hosted by Steve and Susan Grant, was held at the Surfing Deer Restaurant across from Mary Elizabeth's family cottage. It was a perfect opportunity for both families, relatives and friends from all over the country to meet, and introduce Scott’s family to the beauty of this section of the Emerald Coast with unprecedented views from the rare fifty-foot bluffs found in Seagrove Beach.

In November, the young men "headed West" to Austin, Texas for a football game. Not to be outdone, in March the bridesmaids ventured to Santa Fe, New Mexico for a "relaxing" weekend, which included a night at the amazing Meow Wolf's House of Eternal Return.

During the wedding weekend, the mothers of the Bridesmaids hosted a Bridal Luncheon at the Seaside home of the bridesmaids. The fiesta theme, which began in Santa Fe, was continued here with the cuisine, festive décor and attire. One treasure presented during the day was a beautiful rendition of the Seaside Chapel, painted by Montgomery artist Camilla Armstrong, and given to Mary Elizabeth as a wedding gift from Camilla and husband Jerry. Cam also presented each bridesmaid with a painting of a chili pepper that related back to their Santa Fe excursion, as well as paintings of the beach for each bridesmaid’s mother. Karyn Sessions, the mother of the bride's childhood friend from Enterprise, was most helpful at the luncheon and throughout the week's activities.

While the ladies were at lunch, the groom and his groomsmen gathered for a final round of golf on Friday before the wedding, ultimately leading to the sampling of some fine Cohibas from Cuba.

Later that evening, wedding guests were invited to a perfect Beach Bonfire Welcome Party, complete with a gentle ocean breeze, overflowing libations and s'mores galore. This gala affair was also hosted by Scott’s parents Susan and Stephen Grant. Guests kicked off their shoes, dug their toes in the sand, and enjoyed cross-cultural conversations and corn hole by the sea as they watched a stunning sunset.

Congratulations to Scott and Mary Elizabeth as they begin this new adventure together in New York City. We wish them all the best.