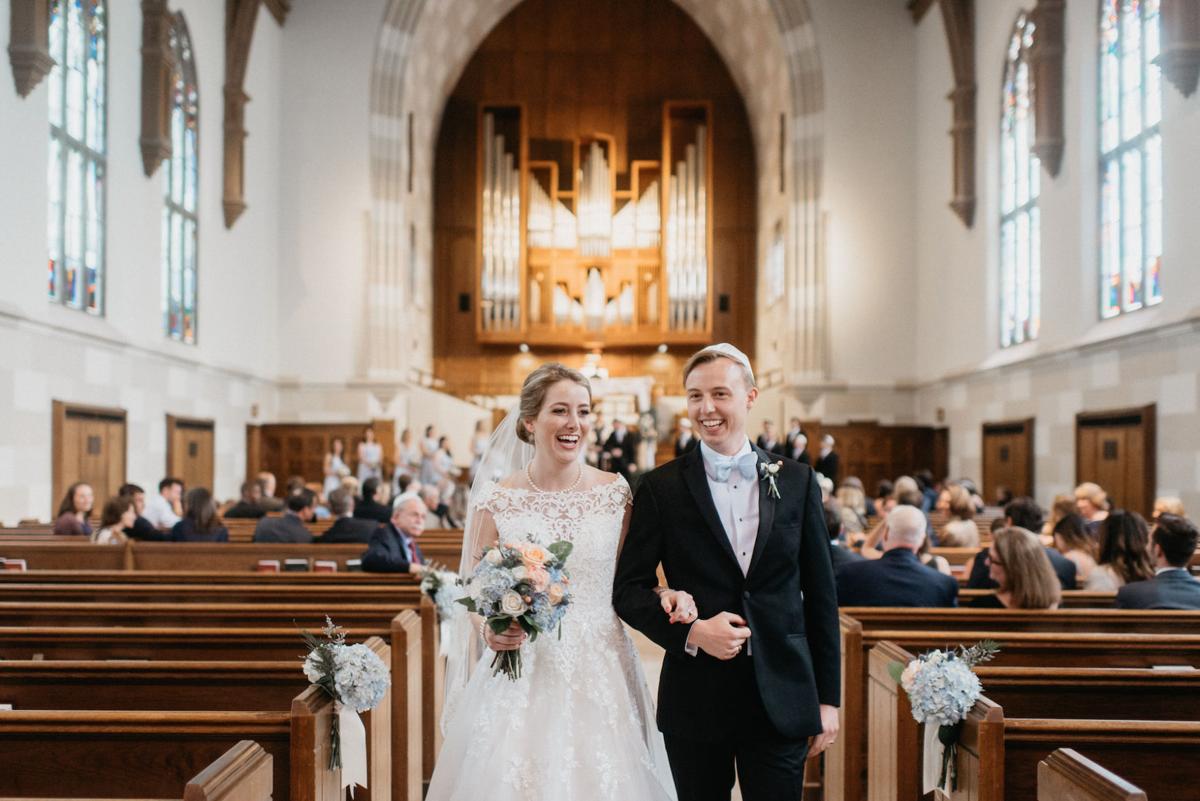 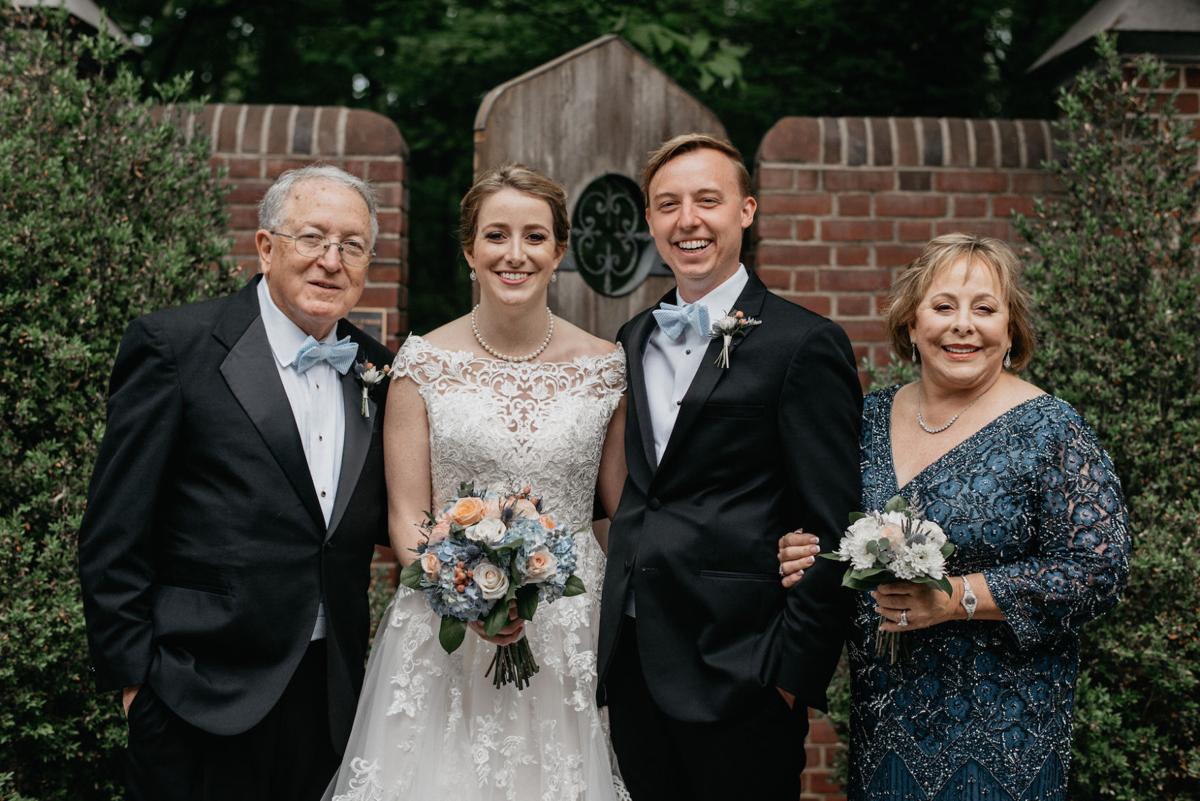 Richard and Nancy Shinbaum with Lesley and John in the chapel garden. 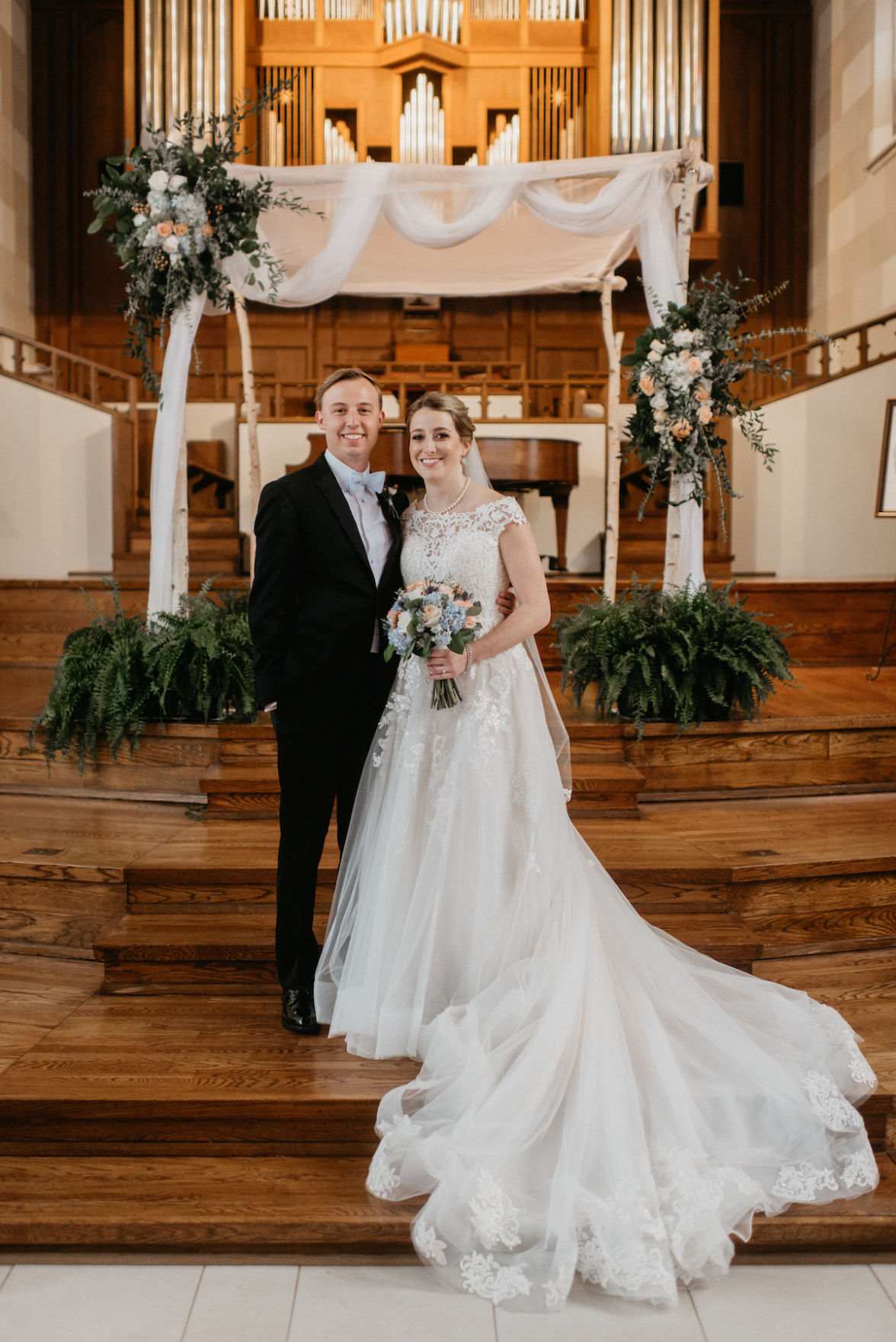 Lesley and John pose in front of the traditional wedding canopy. 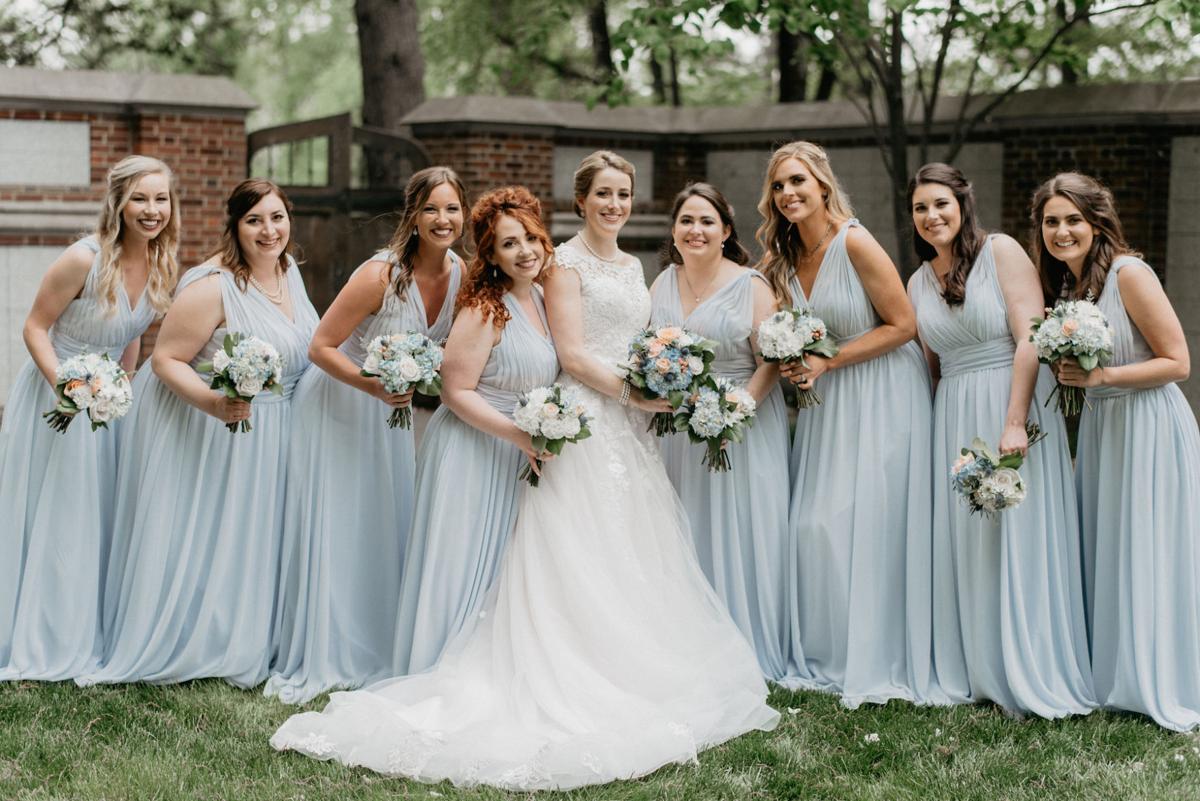 Richard and Nancy Shinbaum with Lesley and John in the chapel garden.

Lesley and John pose in front of the traditional wedding canopy.

The early evening wedding took place at the Cannon Memorial Chapel on the campus of the University of Richmond. Floral bouquets of blue, peach, blush and cream adorned the pews and wedding canopy, all created by Tanya Cornwell.

The post wedding reception was held in the rotunda of the historic Jefferson Hotel in downtown Richmond. Treats of pimento cheese, fried green tomatoes, fiery shrimp and crudités were passed, piano music was played, mint juleps were served as Lesley and John made their entrance down the long, elegant staircase of the Jefferson. Dinner of beef tenderloin, crab cakes, cheese grit cakes, asparagus and root vegetables was served in the Grand Ballroom and dancing began to the music of the Blue Tips. Chairs were lifted holding the bride and groom, as well as all the parents as the evening became more joyous! Lesley and John enjoyed their honeymoon in Greece and are now on their way to Charleston where John will start his residency in Internal Medicine at the Medical University of South Carolina.

Guests from Montgomery attending the festive weekend were Dale and Olan Evans, Ellyn and Michael Hudson, Chris and Terry Raycraft, Fern and Ken Shinbaum, Stephenia Walker and Nancy Moore, and Walden Walker. Hospitality bags were generously delivered to the out-of-town guests by aunts and uncles Fern and Ken Shinbaum and Cheryl (Shinbaum) and Jerry Weinstein. They included all things Virginia...University of Richmond Peanuts, Northern Neck Ginger Ale, For the Love of Chocolate Truffles, Route Eleven Chips, and Ukrop’s Rainbow Cookies.

The Rehearsal Dinner, hosted by Carol and Will Stewart, was held at the University of Richmond Alumni Center. It was a perfect opportunity for both families, their relatives and friends from all over the country, to meet and visit and also see the picturesque campus with its gorgeous lake, beautiful architecture and archways that are so indicative of the University that Lesley and John love.

In March, Lesley and John were honored with a festive dinner party at the home of Dale and Olan Evans. Sharing the hosting duties with the Evans were Deborah and Alan Berlin, Mae and Elliot Cohen, Katherine and Eric Crum, Sallie and David Finney, Chris and Rick Ginsburg, Amy and Neal Labovitz, Mary Carole McDonnell, Chris and Terry Raycraft, Lanie and Ed Raymon, Esther and Herb Scheuer, Sandi and Allen Stern, and Stephenia Walker and Nancy Moore. Delicious appetizers and dinner were provided by Evelyn Thomas. The following day, a brunch was held by Nancy’s high school friend, Mary Carole McDonnell at her Wynlakes home.  The guest list included hosts from the night before and out of town guests Margrit von Braun of Moscow, Idaho; Emily Kling of Auburn, Todd Lowry, Tanjie and Bill Kling, Todd McBride, Bess and Doug Csar and Amanda Mullins, all of Huntsville, and Carol McWhorter and Avery and Jake Lisenbe from Birmingham, Walden Walker, the Bryan Decapites, Fern and Ken Shinbaum, and Amanda Helms of Montgomery. Chef Brian Whisenant prepared vegetable quiche, cheese grits, blueberry bread pudding drizzled with maple whiskey sauce, and fresh fruit. Mary Carole sent the guests home with Little Red Cupcakes. In April, the bridesmaids jaunted to New Orleans for a weekend while John’s crew celebrated in Atlantic City.

Congratulations to Dr. and Mrs. Stewart on their new adventure in Charleston!