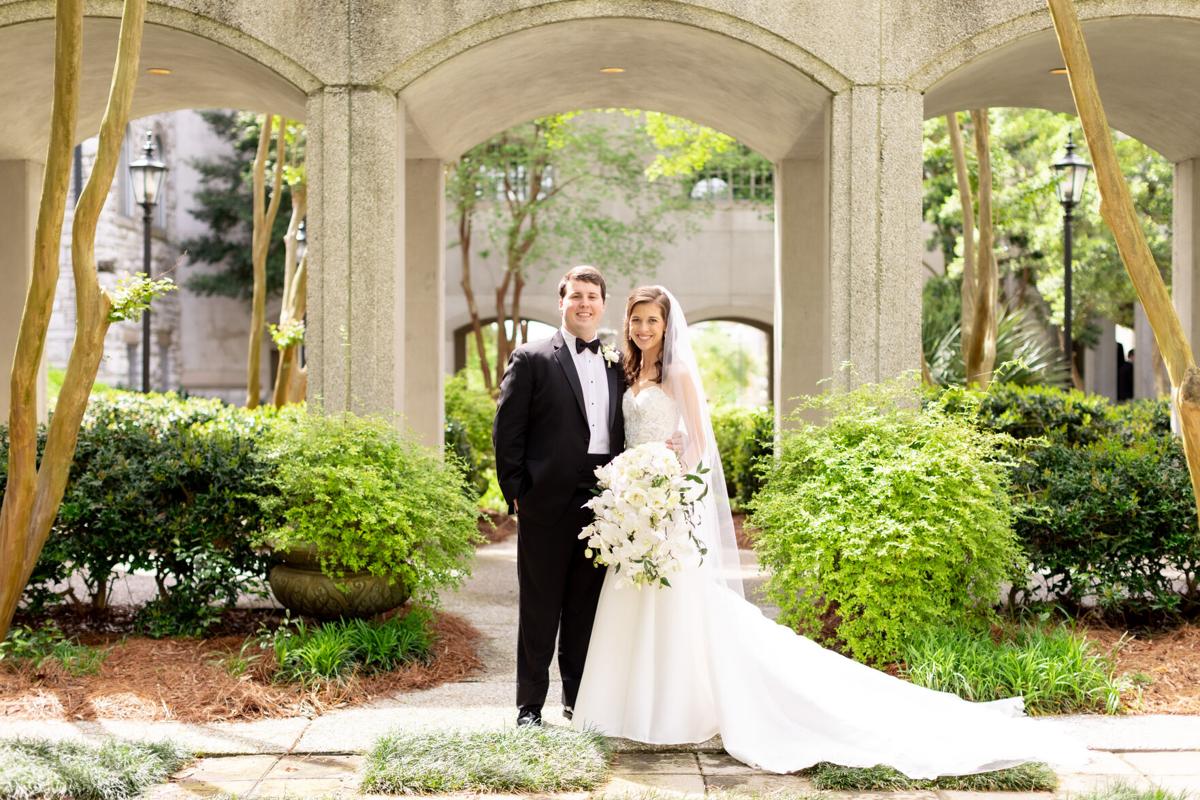 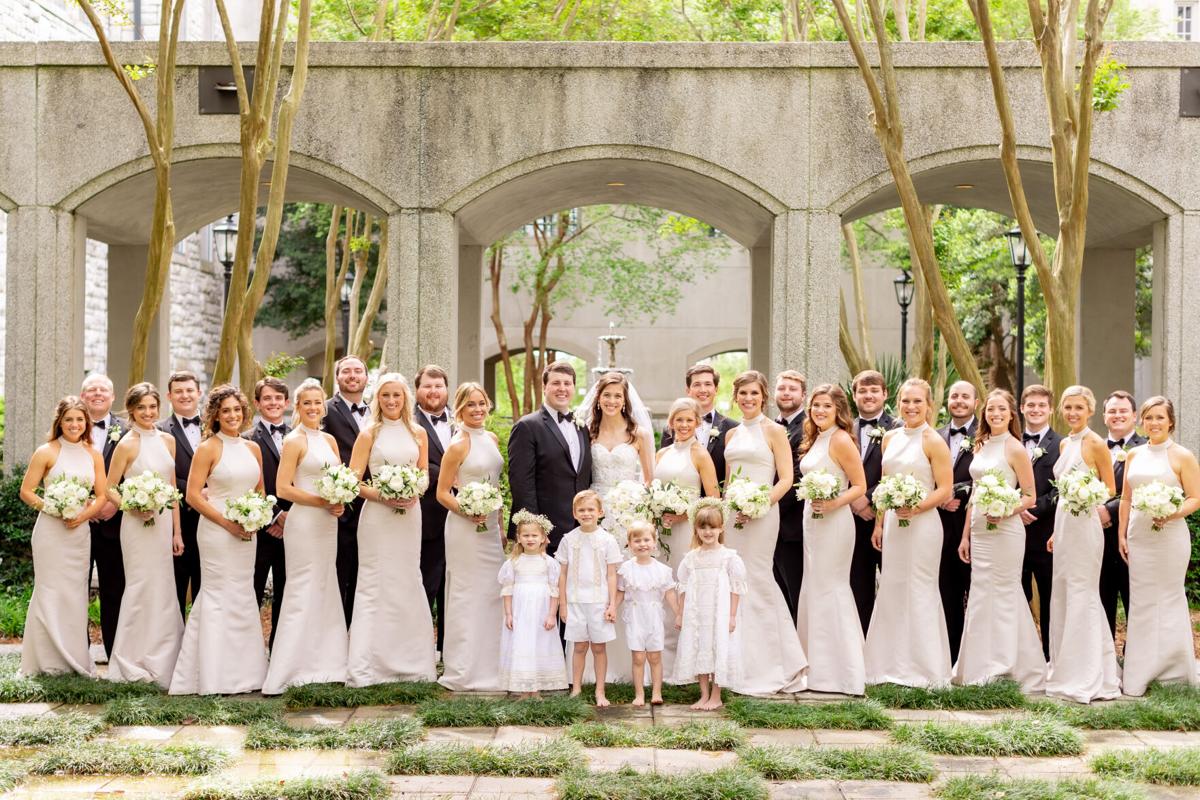 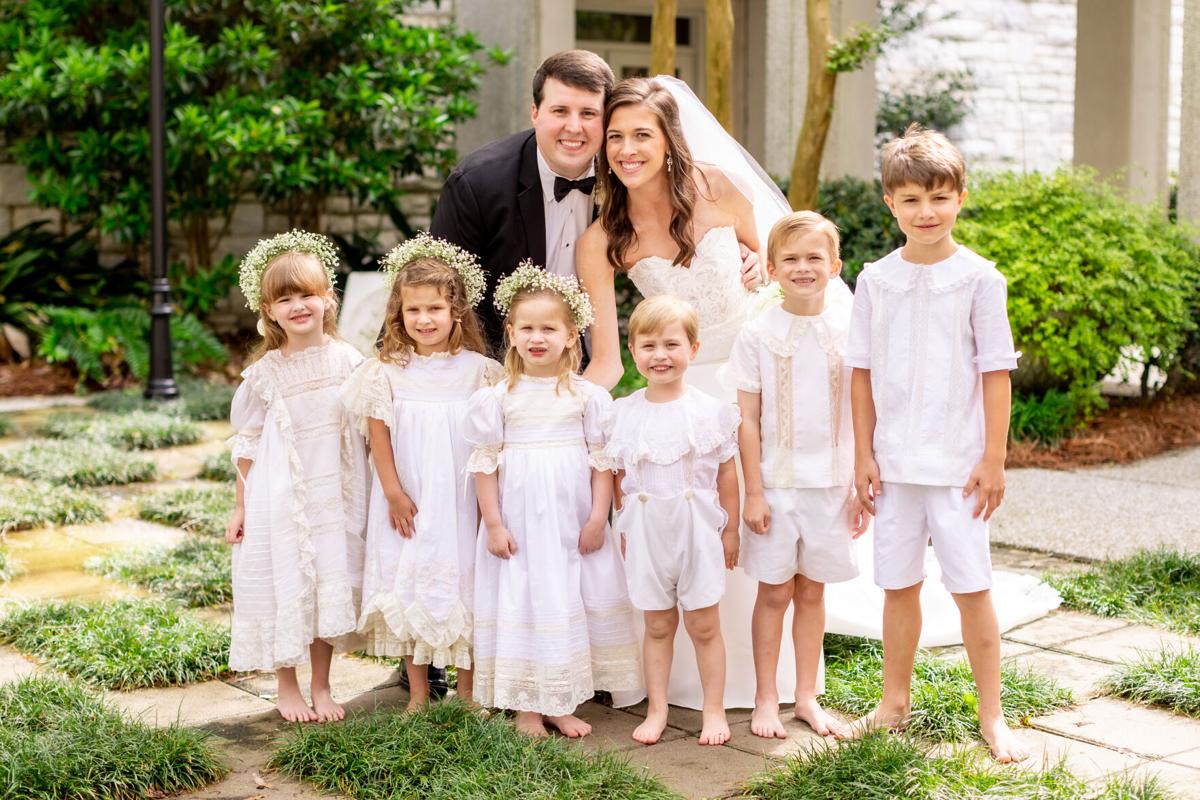 The bride and groom and the children in their wedding. From left, Will Akins, Elizabeth Akins, Tate Empey, Priscilla Parks, Crawford Sylvest, Tate Bush, Bobby Sylvest, and Wylie Parks. 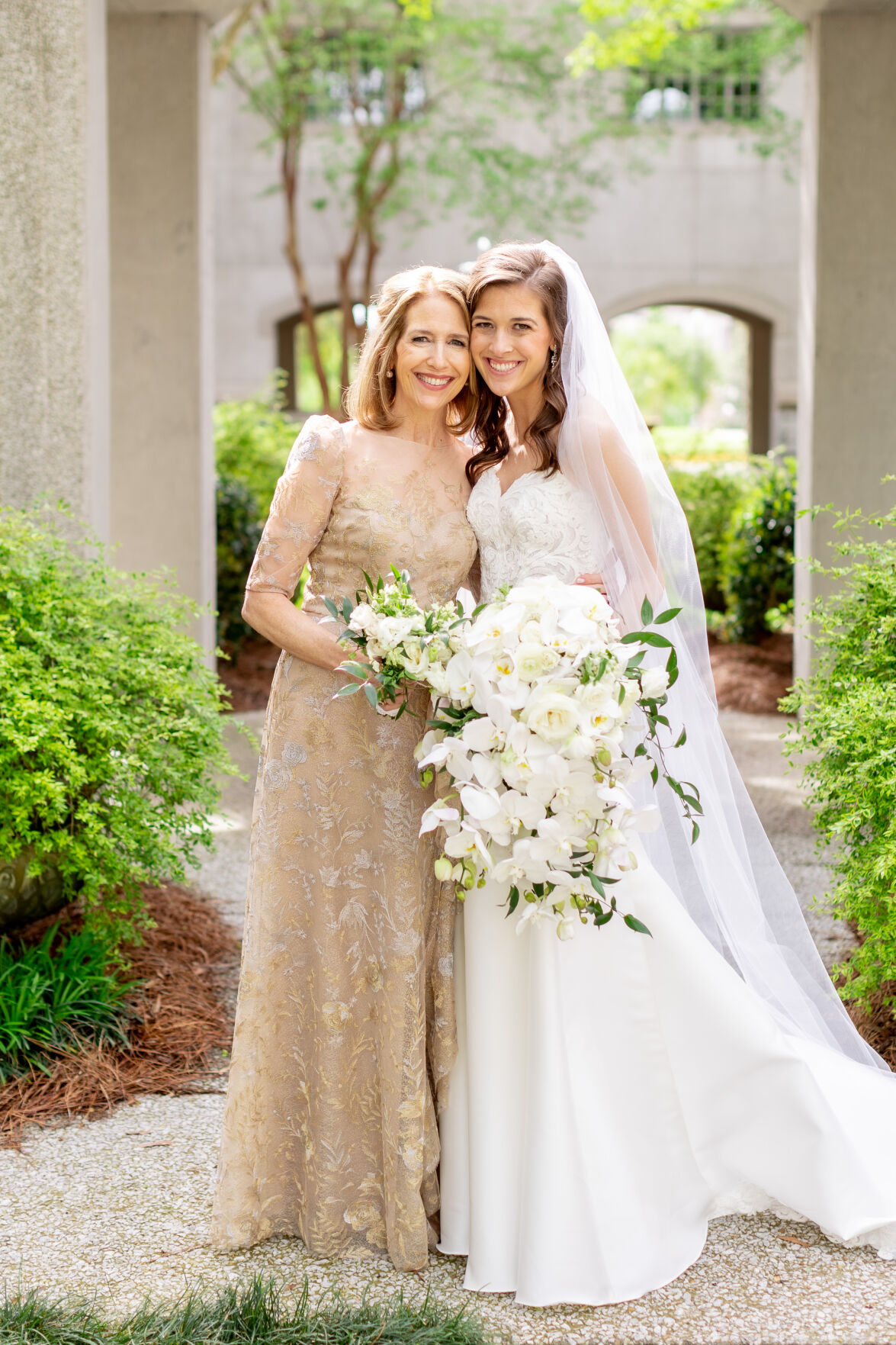 Elizabeth with her mother, Beth Poundstone. 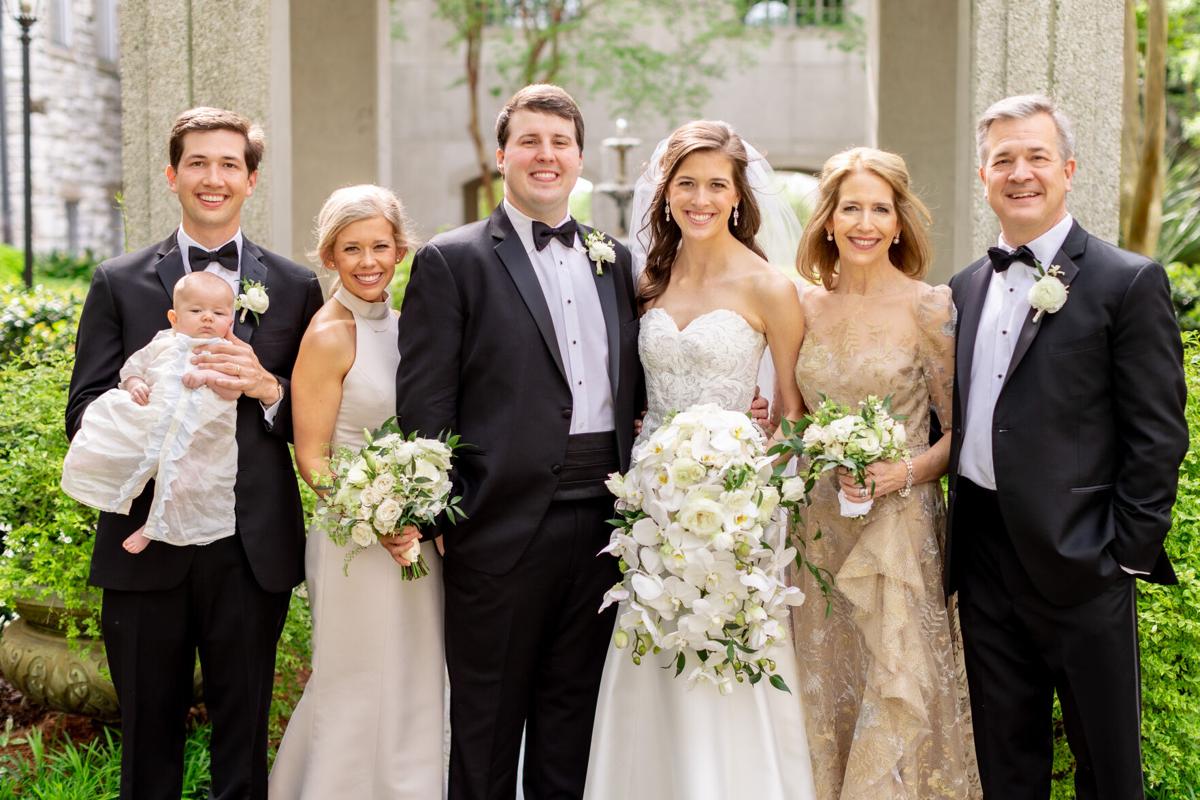 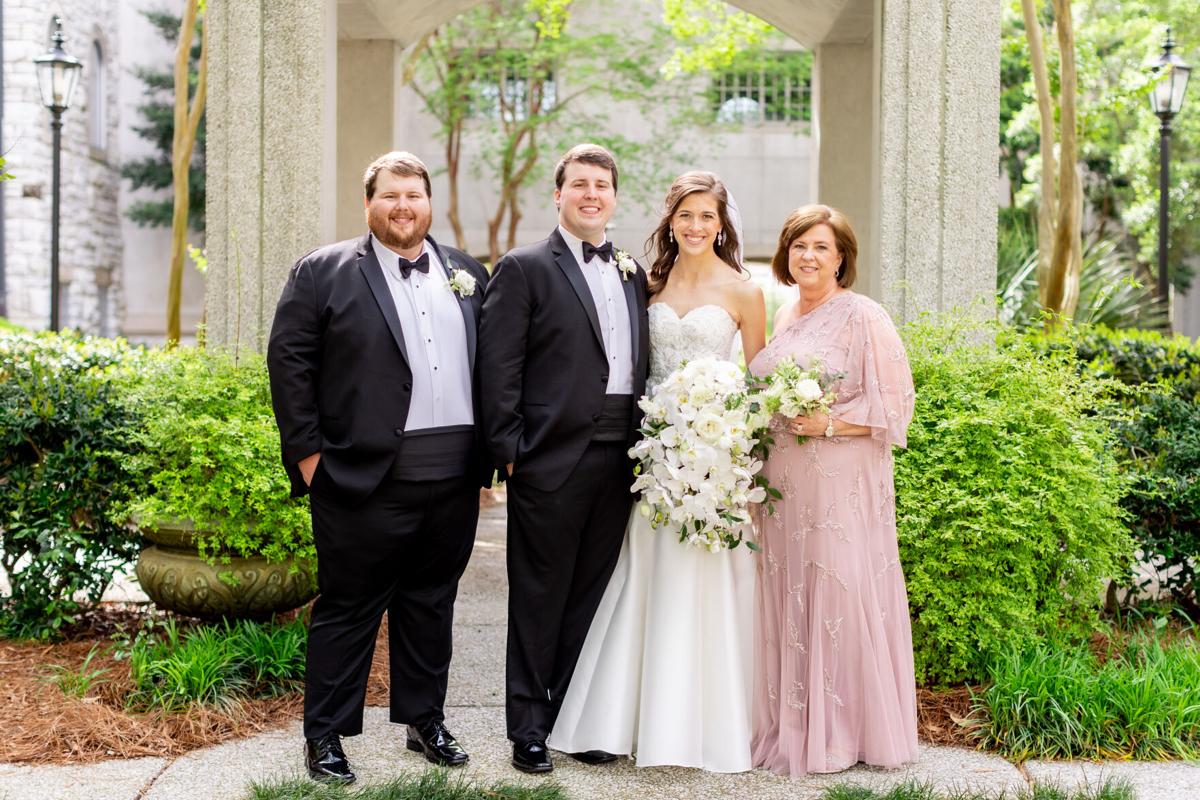 The bride and groom with his family. From left, Jared Akins, Will Akins, Elizabeth Akins, and Ramona Akins. 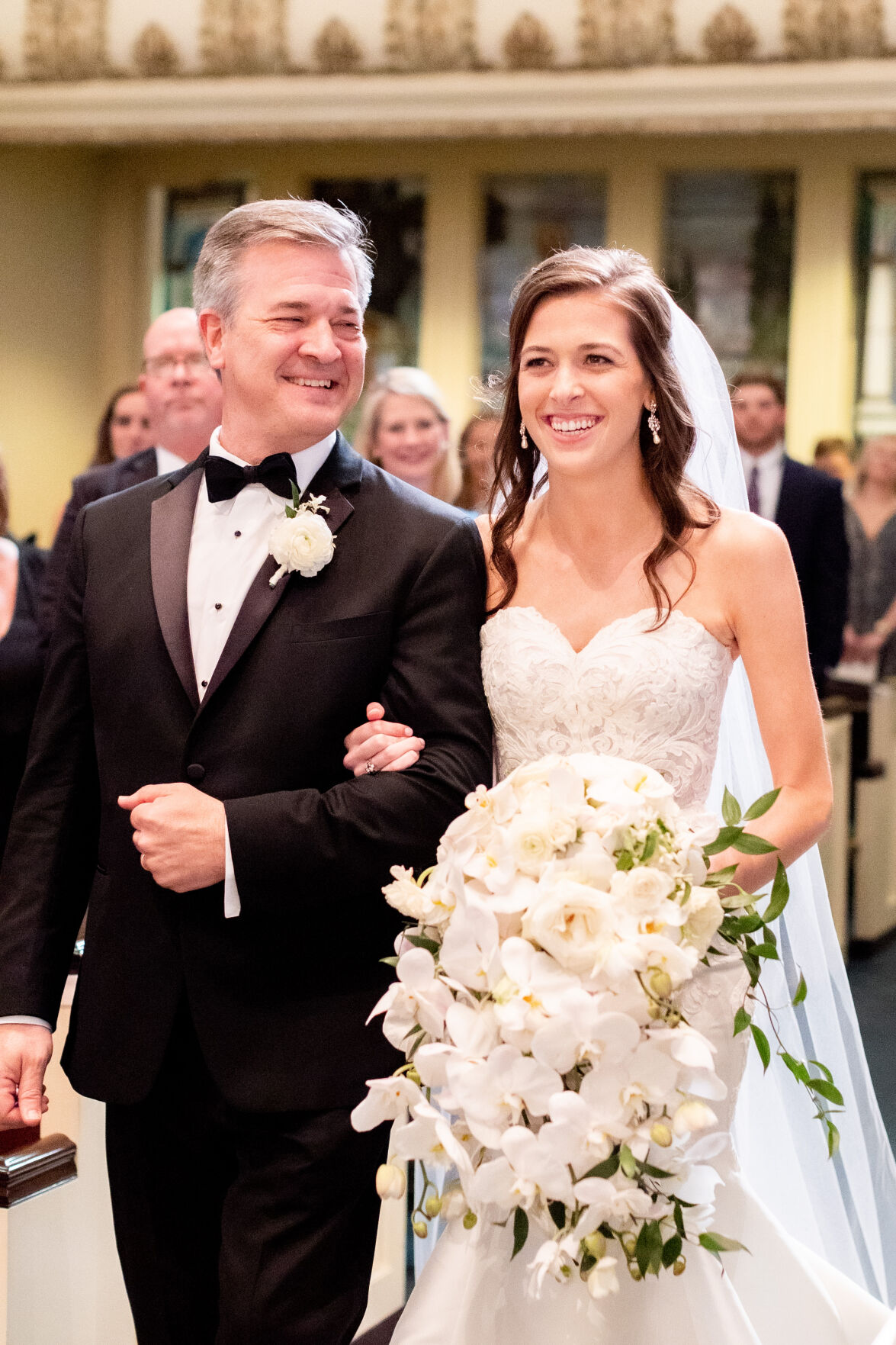 Father of the bride Haygood Poundstone walks Elizabeth down the aisle. 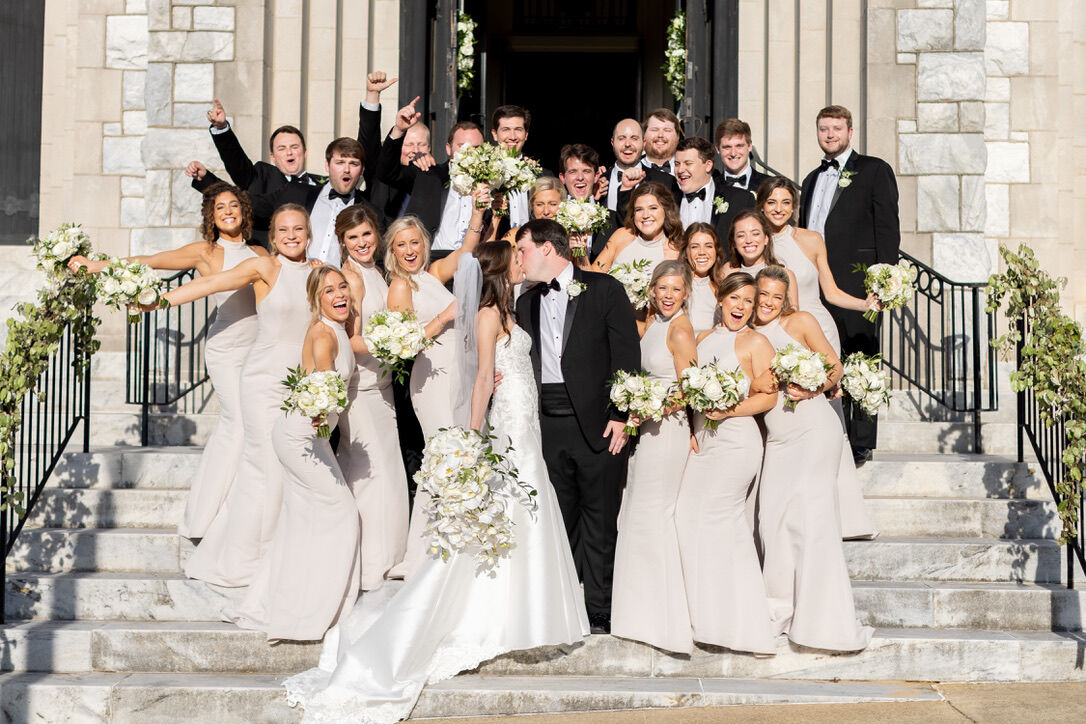 Will and Elizabeth’s wedding party celebrates the newlyweds!

The bride and groom and the children in their wedding. From left, Will Akins, Elizabeth Akins, Tate Empey, Priscilla Parks, Crawford Sylvest, Tate Bush, Bobby Sylvest, and Wylie Parks.

Elizabeth with her mother, Beth Poundstone.

The bride and groom with his family. From left, Jared Akins, Will Akins, Elizabeth Akins, and Ramona Akins.

Father of the bride Haygood Poundstone walks Elizabeth down the aisle.

Will and Elizabeth’s wedding party celebrates the newlyweds!

Elizabeth Chapman Poundstone and William Hunter Akins were united in holy matrimony on April 10, 2021 in a 5 o’clock evening ceremony at First Baptist Church in Montgomery, Alabama. The ceremony was officiated by John Michael Sasser in the Stakely Sanctuary.

Will and Elizabeth met while attending Auburn University their Senior year. On a mission trip, sponsored by Campus Crusade (Cru), to Costa Rica the couple met and almost immediately started dating. After graduation, Will worked in East Asia for Cru and Elizabeth was also on staff for Cru in Auburn working with college students. Due to the pandemic, Will’s stint in East Asia was cut short and he returned to the States and proposed to Elizabeth in August of 2020.

Escorted down the aisle by her father and given in marriage by her parents, Elizabeth wore a gown designed by Martina Liana. Elizabeth’s gown was regal, pristine and had a touch of vintage detail.  Her bodice was made of French and Chantilly laces that gracefully extend in whimsical patterns over the fitted silk Zibeline skirt before flaring into a pleated skirt detail. The double-scalloped feature of the elegant train adds to the romance, complete with fabric-covered buttons running through the hem for a hint of classic nostalgia.

Following the age-old tradition, Elizabeth’s “something old” was the lace from her mother’s veil wrapped around the handle of her wedding bouquet which consisted of Acacia Foliage Pearl Silver, Agapanthus Snowflake White 60cm, Bayleaves, Butterfly Ranunculus - White, Hellebores White, Hydrangea White, Italian Pittosporum, Italian Ruscus, Lisianthus White, Orchids Phaleanopsis White, Princess Miyuki Rose, Ranunculus White, Rose Mayra White, White Dove Roses, White Majolica Sprayroses and White Tweedia. The “something blue” was a diamond and sapphire dinner ring that she wore that belonged to her grandmother, Lore Poundstone and was given to her after she passed away. The “something borrowed” was a six pence that she wore in her shoe that she borrowed from her mother worn in her wedding over 35 years ago.

Crystal Strickland, with Southern Posies served as the wedding planner and designed the spectacular floral arrangements at the church and reception. The arrangements consisted of white roses, hydrangeas, lilies and peonies. The flowers were dedicated in loving memory of the grandparents of the couple and the bride’s late Aunt Lore Poundstone Parks. Ceremony music was provided by organist Joy Brown, violinist Beth Hoener and cellist Chin Mai Lee. All music played during the ceremony were the favorite hymns of the bride and groom. The scripture reader was Meredith McNamee Gordon, friend of the couple. Program attendants were: Phoebe Roane Parks and Lore Hammond Parks, cousins of the bride.

Following the ceremony, the reception was held in the ballroom of the Montgomery Country Club. As guest arrived at the entrance of the club, they were greeted with a glass of champagne and music played by a string duet. Guests dined on Southern fried chicken tenderloins, gulf shrimp, smoked salmon, Russian new potatoes, roasted vegetables with a balsamic glaze, southern style biscuits and a watermelon salad with onion and feta cheese. A crowd favorite were canapes consisting of pimento cheese, Conecuh sausage and a wickle. There were also stations serving macaroni and cheese (a favorite of the bride) with various toppings and a steamship round with rolls.

The bride’s wedding cake was a five-tiered creation from Cake Designs and featured prominently in the middle of the ballroom.

The flavor of the layers alternated lemon or almond and was covered with Ivory colored butter cream icing. Each layer was separated with white and green hydrangeas making for a spectacular center piece feature in the ballroom. Will and Elizabeth toasted each other with champagne in engraved sterling silver goblets that were given to them by the Rhon Jones Family, Tyler Williams Family, Bo Burkes Family and Michael Mulvaney Family, lifelong family friends of the bride. Guests also enjoyed a groom’s cake that was a three-tier rectangular caramel cake created by Cake Designs. Fresh pears and greenery decorated the cake.

The Atlanta Pleasure Band provided music well into the evening. The newlywed couple danced their first song to “You Make Me Feel Like Dancing” by Leo Sayer, followed by the bride’s dance with her father to “My Girl” by The Temptations. The groom and his mother danced to “What a Wonderful World” by Louis Armstrong. Later in the evening, guests were treated to Chris’ hotdogs and bushwhackers that were poured in white lit glasses adorned with the couple’s crest. After celebrating and dancing all night on the white dance floor, the happy couple departed the reception through showers of white confetti that was thrown from guests. The couple drove away in a vintage black Rolls-Royce.

After honeymooning in Charleston, South Carolina the couple returned to Birmingham for a few months and will reside in Montgomery. The photographer for the wedding and the weekend festivities was Brooke Glassford with Colorbox Photography from Montgomery, Alabama.

Wedding festivities for the week began on Friday when Elizabeth and her bridesmaids were celebrated at a bridesmaid’s luncheon at Wynlakes Country Club, hosted by Billie Grosser, Camilla Irvin, Deanne Jones, Cathy McBride, Vicky Moore, Alexandrea Parks, Hilary Parks, Nancy Parks, Emelyn Sullivan and Dawn Williams. The entire wedding party enjoyed the after-rehearsal celebration Friday evening at the Montgomery Country Club, hosted by the groom’s parents. The guests enjoyed a slideshow of the bride, groom, family and members of the wedding party during dinner.

The wedding day began early at the home of the bride’s parents with Abby Moorer and her team from Birmingham doing hair and makeup for the bridesmaids which was given as a gift from the bride. During the early hours, angel biscuits with ham, chicken minis, fresh fruit, banana bread, muffins, mimosas and coffee were served to everyone. As lunch approached, chicken salad sandwiches, pimento cheese sandwiches, chicken fingers, fresh fruit, vegetables with ranch and custom iced cookies were served to the bridesmaids before they left for the church.

Will and Elizabeth were honored with several parties and showers prior to the wedding. An engagement dinner was held at the beautiful home of Mark and Eegee Williams on March 13, 2021. It was hosted by Shawn and Jason Adams, Ann and Troy Amster, Patti and Percy Badham, Anne and Hal Bloom, Farrow and Bo Burkes, Lisa and Gordon Chambliss, Susan and Allen Clark, Jennifer and Larry Epperson, Kelley and CT Fitzpatrick, Lilla and Trey Granger, Gerri and Stuart Hendon, Deanne and Rhon Jones, Ginger and Bob Jones, Sarah and Lee Moore, Vicky and Tommy Moore, Emily and Keith Newell, Beth and Pat Ramsey, Winston and Gene Reese, Angie and Woody Rush, Ann Allen and Rusty Salter, Susan and Blair Smith, Celia and Troy Teel, Dawn and Tyler Williams and Eegee and Mark Williams.

A drive by shower for the Bride was also in March hosted at the beautiful Wyndridge home of Kevin and Stacie Haynes. The hostesses for the shower were: Juli Bethea, Rosemary Blackmon, Christy Colee, Donna Conte, Stacie Haynes, Tanya McLemore, Lisa Powell, Brenda Rowell, Ellen Stone, Pam Newman, Marion Steindorff and Ashley Whatley. The bride also had a Kitchen and Recipe Shower in Birmingham at the lovely Mountain Brook home of Marcie Rodrigues. The shower was hosted by Sandy Mulvaney, Angie Letzer, Abbie Madison and Marcie Rodrigues.

There was also a shower, in Fort Payne, on May 16th for the newlyweds at the home of Jerral and Chrystal Ingle. Hosts for the event were Tammy Ashley, Allison Beck, Kim Brown, Denise Ham, Chrystal Ingle, Dana McCutcheon, Cindy Lowe, Kim Poe, Pam Roberts and Sissy Walker.