Skip to main content
You have permission to edit this article.
Edit
Home
News
Sports
A & E
Opinion
The Whirl
Legal Notices
School
1 of 7 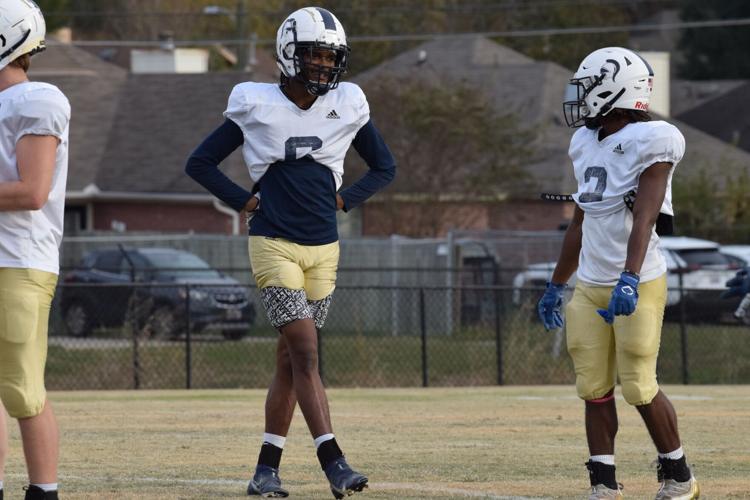 Ziggy Holloway, Ethan Beard (right) chat during a break in the Trojans' practice on Tuesday. 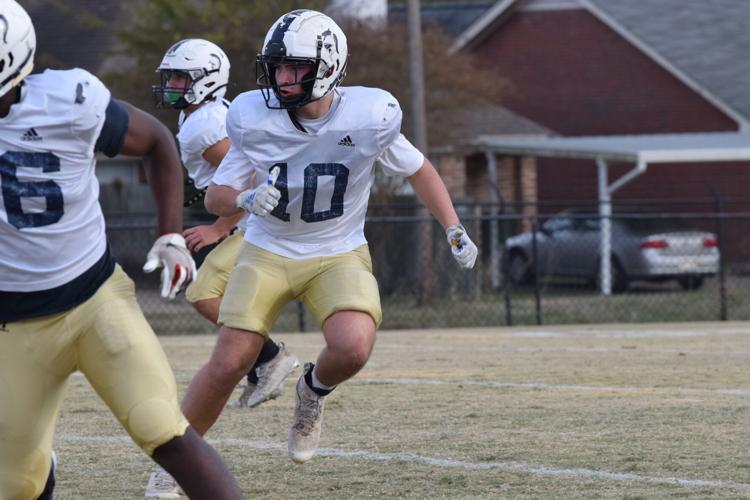 Clint Shores reacts to a play by the scout-team offense on Tuesday. 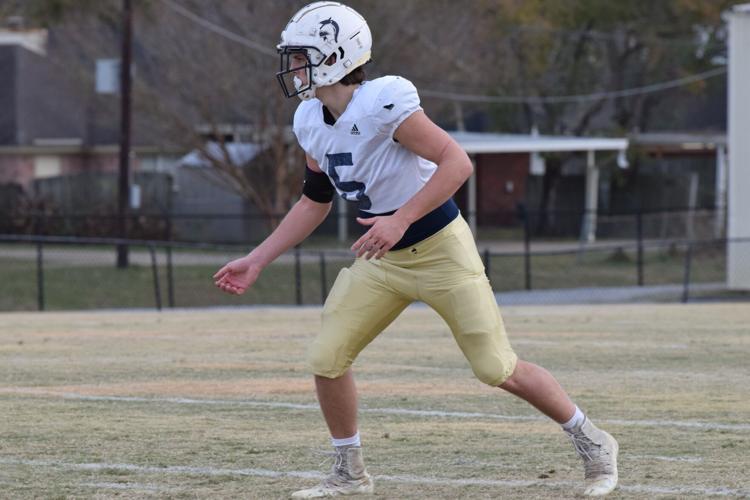 Cosner Harrison goes through defensive drills for the Trojans in Tuesday's practice. 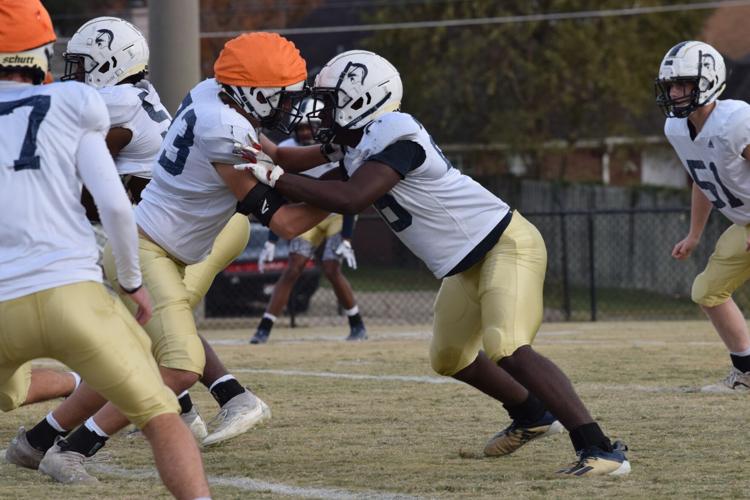 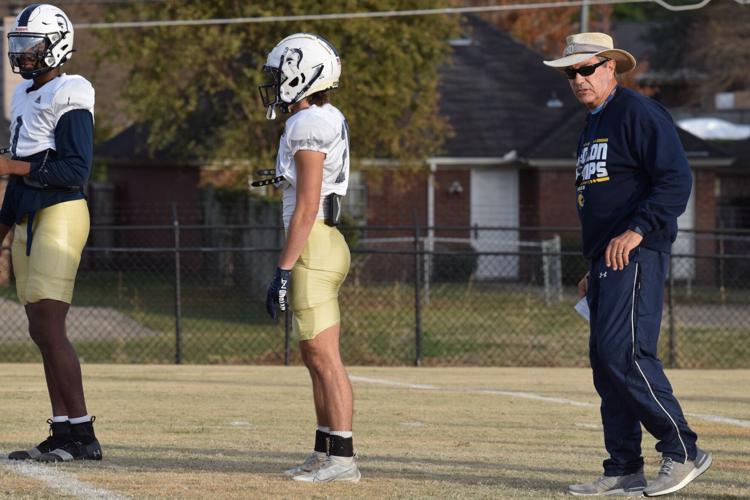 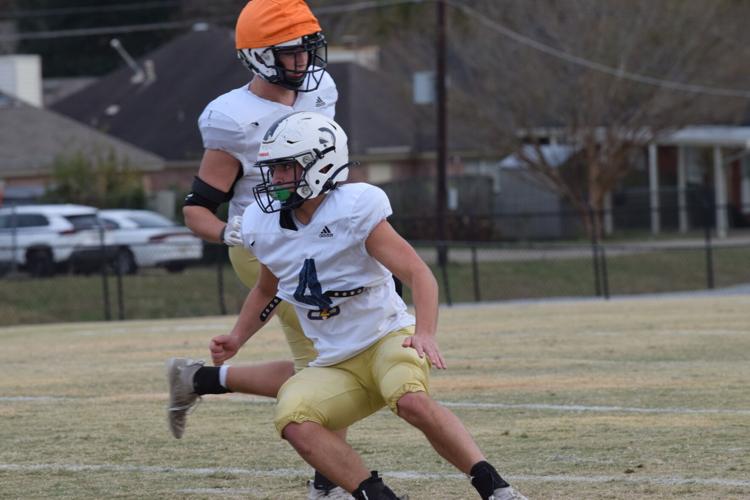 Trojan linebacker Wils Johnson reacts to a play by the scout-team offense in Tuesday's practice. 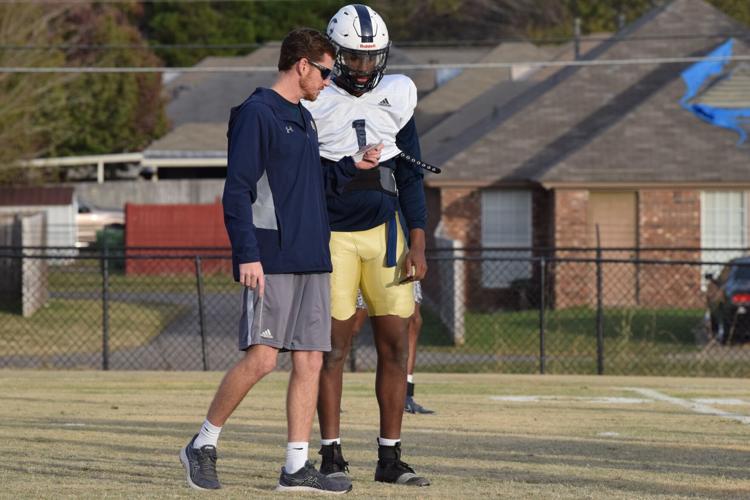 Ziggy Holloway, Ethan Beard (right) chat during a break in the Trojans' practice on Tuesday.

Clint Shores reacts to a play by the scout-team offense on Tuesday.

Cosner Harrison goes through defensive drills for the Trojans in Tuesday's practice.

Trojan linebacker Wils Johnson reacts to a play by the scout-team offense in Tuesday's practice.

When Ziggy Holloway started generating some interest in summer camps, he thought of his travel ball 7-on-7 team and its quarterback, KJ Jackson.

Holloway was playing at Tallassee on a run-oriented offense while KJ Jackson was coming off of a record-setting passing season at St. James.

“He wanted me to come over and try out for the team,” Holloway recalled, “and that just kind of happened.”

Months later, Jackson is still setting records as the Trojans’ quarterback, but Holloway has found a niche as well, establishing himself as a lock-down cornerback and a big-play receiver for St. James this season.

“At 7-on-7, he had been getting some looks (from college recruiters) and he was getting recruited as a receiver,” St. James defensive coordinator Jeff Corley said. “At Tallassee, (coach) Mike Battles runs a lot of Notre Dame Box where they predominantly run the ball. He wanted to showcase his skills as a receiver. He had played some corner in the 7-on-7 as well and we needed another defensive back who was faster, taller, longer.”

Quickly, Holloway established himself as one of the biggest play makers in the Capital City Conference. On offense, he has 645 yards on 25 receptions, an average of 25.8 yards per catch, along with a school-record 13 touchdowns, tying the school’s single-season record (also held by teammate Ethan Beard). Holloway has at least one touchdown catch in every game but one this season.

Defensively, he mentioned as one of the best defensive backs in the Capital City Conference, a group that includes Georgia Tech commitment LJ Green at Catholic and Kentucky commitment Avery Stuart at Alabama Christian.

“I tell all the college guys he’s Kool-Aid McKinstry Jr.,” said St. James coach Jimmy Perry, referring to the University of Alabama cornerback. “I coached that Alabama-Mississippi All-Star Game when Kool-Aid was in it and I got to watch him move around on the field. (Holloway’s) body type is a lot like Kool-Aid. And Kool-Aid was a great kid, one of the favorites on that Alabama-Mississippi team. And (Holloway) is a great kid and one of the favorites here.”

Holloway wasn’t sure what to expect when he showed up at St. James in June, a day prior to the start of summer workouts. He probably figured he would get to play receiver, but he insists he arrived in the summer ready to play wherever he was needed.

“I had played both sides the same (at Tallassee), receiver and corner, but I never really played much corner my sophomore year,” Holloway said. “I was just coming to help the team wherever I could, wherever they needed me to play. Coming from Tallassee to here is a big change but I’m adjusting to it pretty much.”

He caught a touchdown pass in his first game, his second and his third, providing the perfect complement to Beard on the other side of the field. And with Beard and Clint Houser as the Trojans’ cornerbacks, Holloway’s arrival has strengthened the Trojan defense, allowing Beard to move to safety and serve as a rover while putting Holloway on the opposing team’s tallest receiver.

“I knew Ethan was the leading receiver when I got here but I knew I was going to have to play a role in stepping up and helping him out,” Holloway said. “I feel like I click with Ethan more than any other teammate I have here. We always compete. It’s a competition thing because we love the game.”

Just as Holloway is in uncharted waters as the team’s record-setting receiver, so, too, are his teammates after reaching the semifinals for the first time in school history. St. James (11-2) is one game away from a trip to the Super 7 but standing in the way is Mobile Christian (6-7), a team with a deceptive record after forfeiting four games earlier this year for the use of an ineligible player.

“The first three games in the playoffs, we faced teams that primarily run,” Perry said. “This group is very balanced. That will present a whole different set of circumstances for us to deal with. They’re a good solid football team. It’s going to be a fun challenge for us.”

Holloway said the goal remains the same and the Trojans have all the ingredients necessary for a trip to Auburn next week.

“We’ve just got to play how we play,” he said. “We’ve got to control what we can control, do what we do and come out and play the way we’ve been playing all year.”