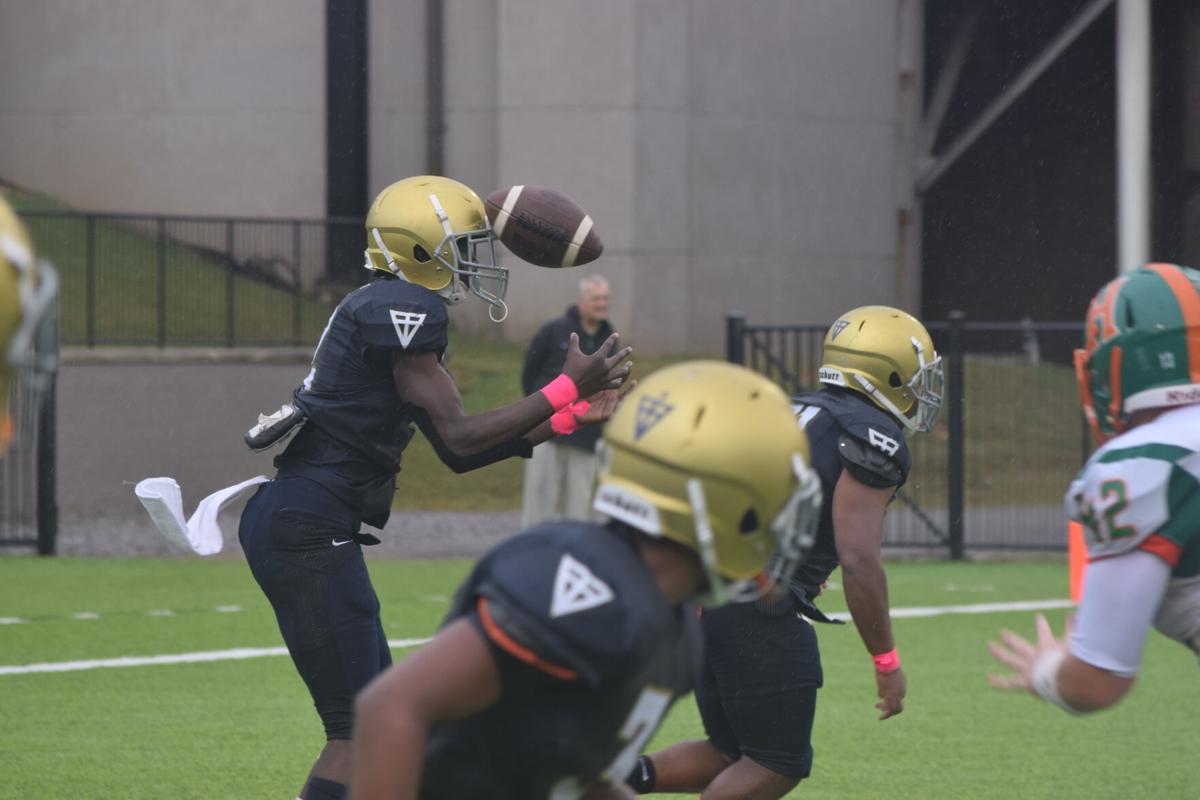 The snap to Valiant Cross Academy quarterback Savion German slips through his hands in Saturday's game with Hooper. 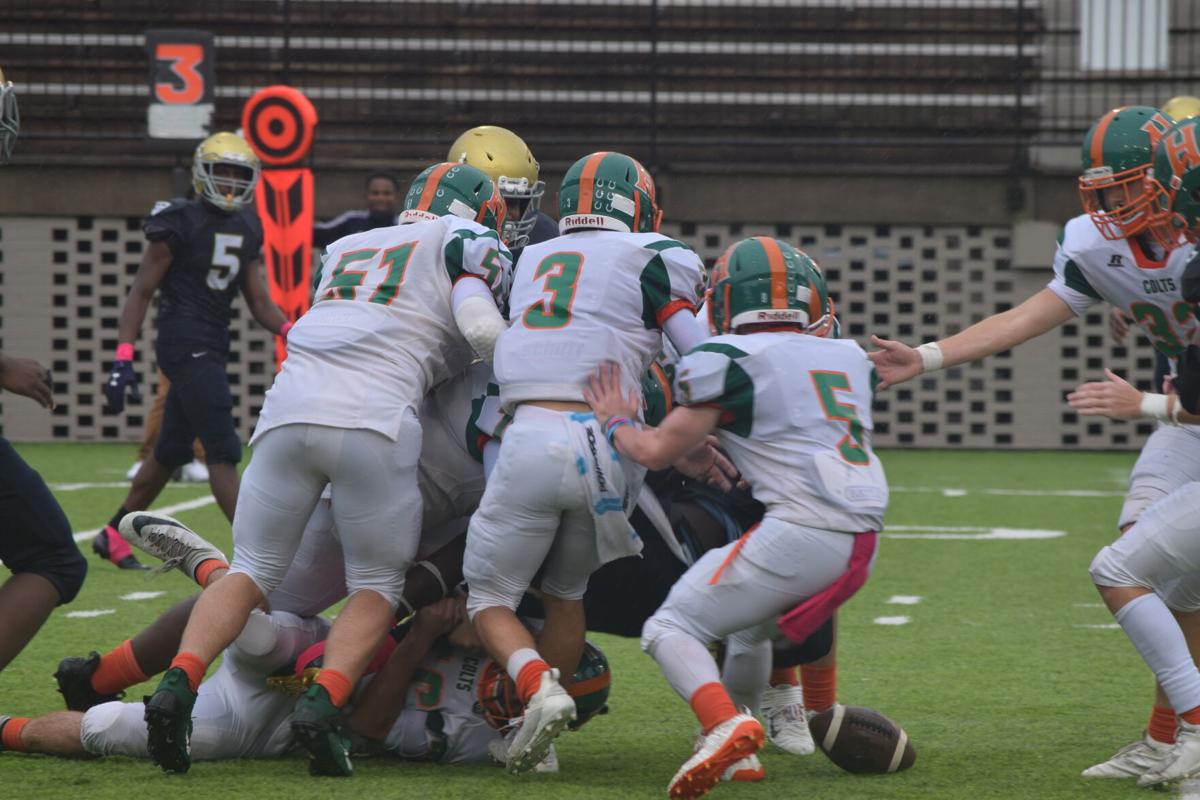 Hooper Academy recovers the ninth fumble in the game with less than a minute remaining to give the Colts one last opportunity at victory. 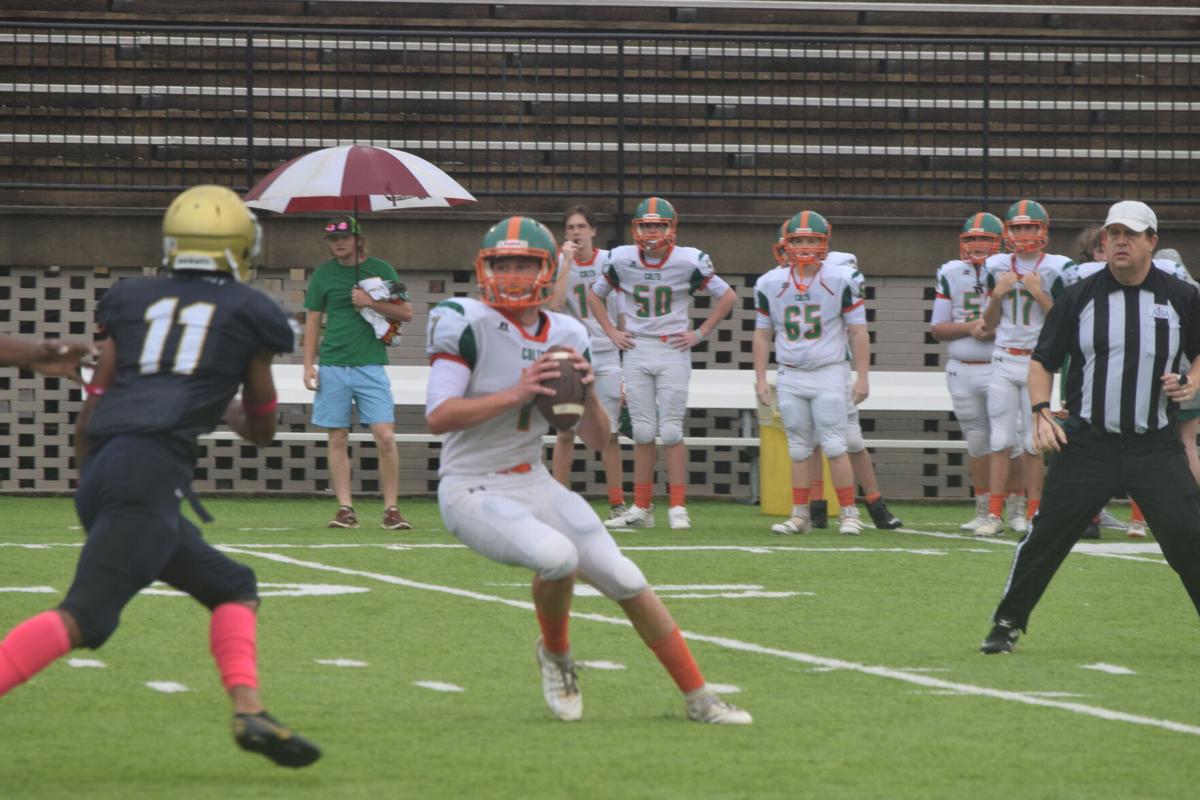 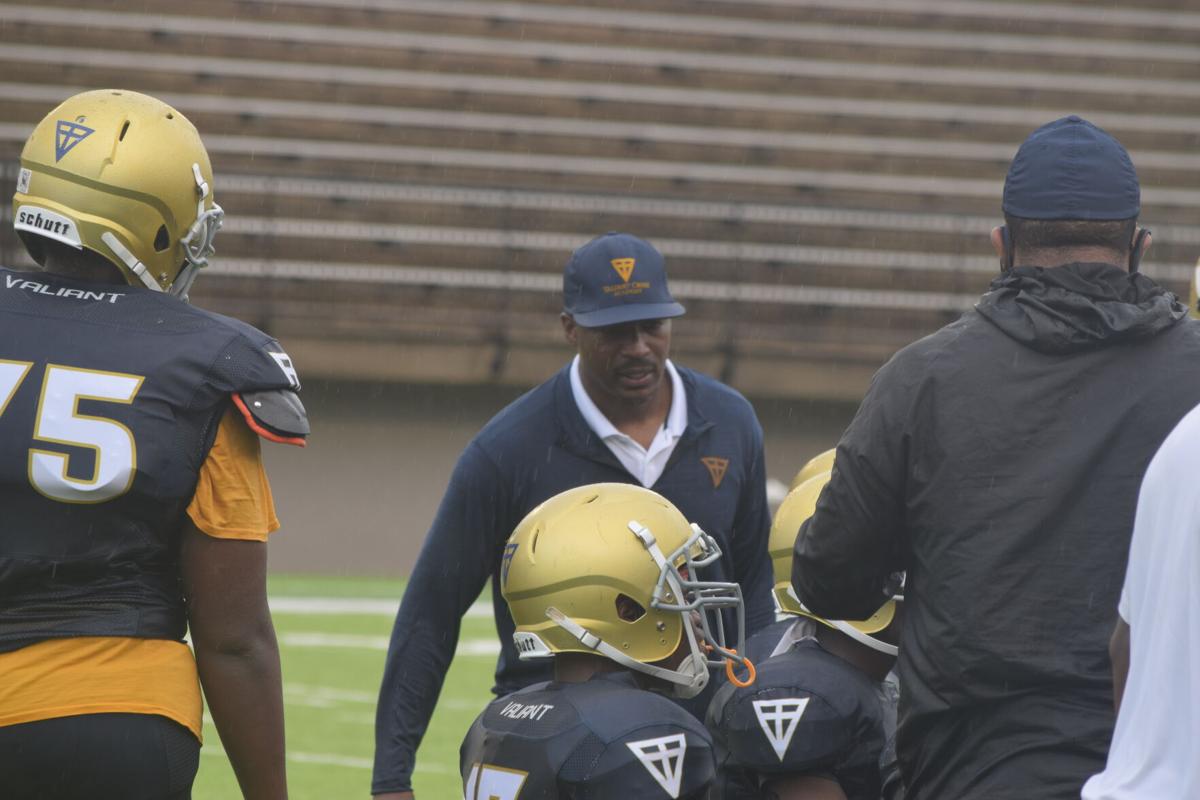 Valiant Cross head coach Willie Spears talks to his players during a timeout in Saturday's game. 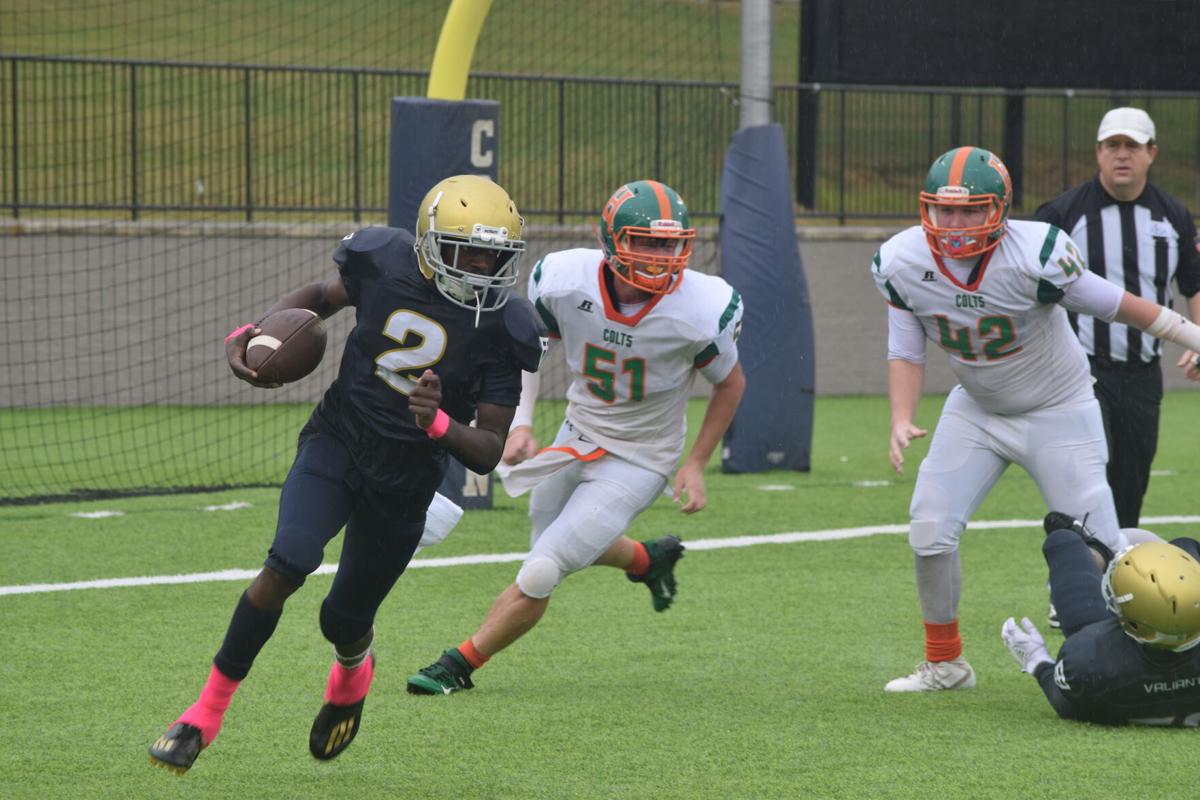 The snap to Valiant Cross Academy quarterback Savion German slips through his hands in Saturday's game with Hooper.

Hooper Academy recovers the ninth fumble in the game with less than a minute remaining to give the Colts one last opportunity at victory.

Valiant Cross head coach Willie Spears talks to his players during a timeout in Saturday's game.

Valiant Cross won the battle on Saturday at Cramton Bowl, but couldn’t win the war.

The Warriors defeated Hooper Academy 14-7, but needed a winning margin of 10 points to win the tiebreaker for third place in AAA Region 1 and earn a bid in the state playoffs in two weeks.

A victory, its first since a season-opening win at Lakeside on Aug. 21, touched off a postgame celebration but it wasn’t enough to give the first-year program a trip to the postseason.

“It was fun for us,” Valiant Cross coach Willie Spears said. “We’re very young, starting three eighth graders, so the big difference tonight was Jamerion Lamar. He played in our game against Lakeside and hasn’t played since (because of an injury). I know Lakeside and Hooper aren’t the best teams on our schedule but he was the difference. It showed tonight how they rallied behind him and in a tremendous way it showed that with him on the field we’re a much better team.”

Hooper meanwhile, finished first among the three teams (the Colts, Warriors and Lee-Scott all finished Region 1 play with a 1-3 record) in the tiebreaker and earned the third seed and a trip to Morgan Academy for the first round of the state playoffs in two weeks, but first-year coach Marty Baker wasn’t happy with what he witnessed on Saturday afternoon.

“We wanted to win this one just to be third outright,” Baker said. “When we realized it was going to come down to this, be prepared to win this game and leave no doubt as to who was third. We just didn’t come ready to play. We were still asleep on Saturday morning.”

Valiant Cross (2-8), playing its first year of varsity football, was much improved in its 2020 finale but still showed signs of being a first-year program with no seniors, no practice facility and no weight room for offseason conditioning.

“You could make the argument that maybe we should’ve waited until next year to play varsity football,” Spears said, “because we were just outmatched night in, night out. We’re very small, we’re very weak. We didn’t work out any during (the shutdown for) COVID, we’re not in school, we don’t have a locker room, we don’t have a football field. There are just a lot of issues, but it was fun. I’m very proud of them and I’m very excited for the future.”

For Hooper (5-4), the future is now. The senior-laden Colts will be favored in next week’s game at Cornerstone but will be decided underdogs in the playoff matchup against the high-scoring Senators. Wins against Valiant Cross and Cornerstone would have given the Colts their first seven-win season since 2002 but now they’ll have to shoot for a win next week to guarantee only their third winning season in that 18-year span.

Hooper came into Saturday’s contest having won four of its last five games before fumbling away a fifth win in a turnover-plagued contest on Saturday.

“Paul (Menefee, the Colts’ leading rusher this season) had lost one fumble all year before today, so I want to say it’s the weather,” Baker said. “It was wet, but it was wet for them, too. We should have taken care of the football and we just didn’t do it. We didn’t block very well. That’s our bread and butter, to run the football, and we couldn’t do that.”

Six lost fumbles kept the Colts from finding any offensive rhythm. A 22-yard run by Antavious Jackson and a 30-yard pass from Savion German to Corey Brown set up German’s quarterback sneak for a 6-0 Valiant Cross lead midway through the first quarter, but in a contest that featured 10 turnovers and 21 plays of negative yardage, sustained offensive drives were virtually impossible.

A 40-yard fumble return for a touchdown by Isaac Harris on the first play of the second quarter, followed by German’s conversion run made it 14-0 but the Colts answered with their only score of the day.

Hooper’s next drive ended with another fumble recovery by Harris, but the Warriors returned the favor with a fumble by Jackson which Chase Emerson recovered at the Valiant Cross 12.

In the fourth quarter, Hooper reached the 2-yard line before Porter Henry fumbled the snap and Valiant’s Alonza Arrington recovered in the end zone; made it to the 4-yard line before a pair of incomplete passes by Henry turned the ball over on downs; and ended with a Zavier Dunn interception in the end zone with 25 seconds left to seal the victory for the Warriors.

Menefee led the Colts with 80 yards on 17 carries and Tamarcus Hardaway added 61 yards on 15 carries, but turnovers and negative plays hampered Hooper’s offense

“It hurts when we can’t hit them with the inside game, then beat them with the sweep because that’s what the wing-T is made to do,” Baker said. “We just didn’t execute today. Our execution was terrible. Rain and a Saturday morning game. That’s no excuse, either, but I think that kind of threw us off.”

Spears, meanwhile, was happy to end the season on a winning note. Known for his coaching efforts at larger public schools, building a varsity program from scratch at a small private school was definitely a learning experience.

“I’m going to be honest, it wasn’t great, it wasn’t what I thought it would be,” Spears said. “But it was really cool to be … their first coach was an honor for me and to be around these boys was an honor for me. I’ve been in some big schools. These guys don’t really know football yet. They’re not aggressive. It wasn’t what I was used to. It took a lot of adjusting for me. But look at how happy they are. That right there makes it all worth it.”