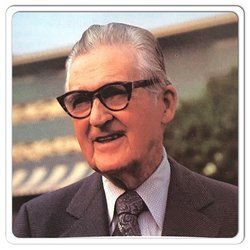 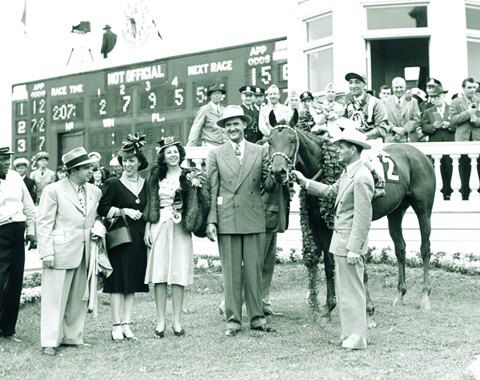 Hooper with Hoop, Jr. in the 1945 Derby winner's Circle 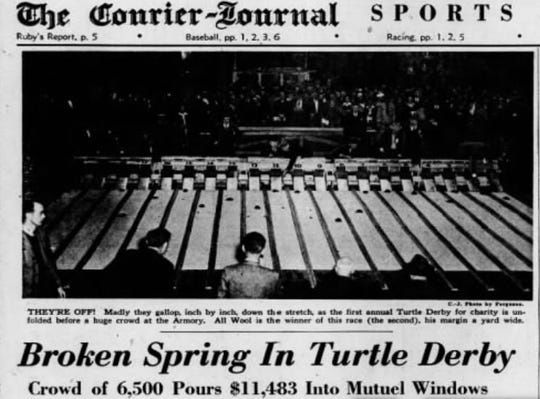 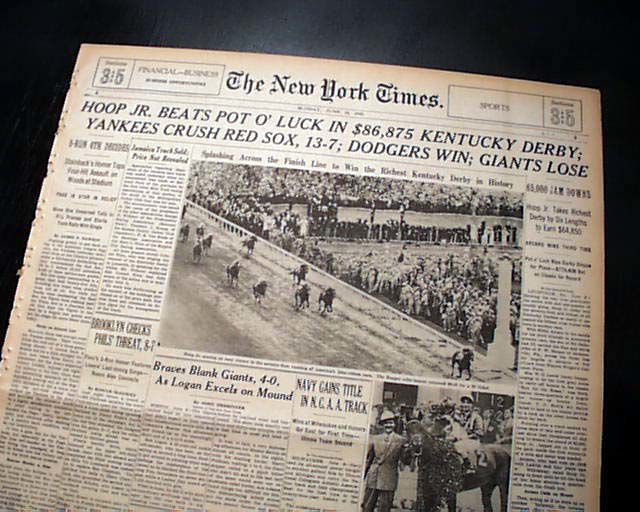 New York Times after the 1945 Derby

Hooper with Hoop, Jr. in the 1945 Derby winner's Circle

New York Times after the 1945 Derby

Kentucky Derby. Run for the roses. First Saturday in May. The most exciting two minutes in sports.

The name itself, or other applicable attributions, alerts people from many walks of life to one of the world’s preeminent sporting events, The Kentucky Derby. It is a continuous annual exhibition of drama, special drinks made with Kentucky bourbon, pageantry including ostentatious hats, intense and emotional athletic competition, wagering, and far reaching financial tentacles that extend well beyond the confines of its home, Churchill Downs in Louisville, Kentucky.

The Kentucky Derby, a race limited to three year old thoroughbreds and first leg of the coveted Triple Crown, has been run every year since Aristides won the inaugural event in 1875, when Ulysses S. Grant was President. Only once has the Derby been delayed.

Those who love thoroughbred racing (such as myself) were crushed with the announcement to delay the 2020 Derby. The 146th Kentucky Derby has been moved from May 2 to September 5. Causing the delay is the fear of the coronavirus, especially since the Derby attracts a colossal flock at Churchill Downs, with the largest attendance ever being more than 170,000 people.

The impact of the Derby delay will probably be felt in all major racing circuits and will certainly change the landscape of major races already scheduled at various tracks throughout the country. The status of the Preakness Stakes has changed also as Maryland officials announced the middle leg of the Triple Crown postponed to September without a specific date set. Currently there is no word on the Belmont Stakes, the final race of the Triple Crown, which remains scheduled for June 6, 2020.

The first Derby delay and the Montgomery connection begins with World War II. Racing was banned in early 1945 for several reasons not the least of which was the government’s need for money. Anyone who has stood on the patron side of a pari-mutuel window, such as myself, knows a bet must be made with cash, not a War Bond. The government wanted people to buy bonds not use the same cash to place bets. That reason plus the complaint that racing was using much needed materials forced the ban. The first break in the ban came when Germany surrendered on May 8, 1945, just three days after the first Saturday in May (May 5, 1945) the Kentucky Derby’s usual day.

Before the Derby was rescheduled Louisville decided it could not wait on racing and according to The Louisville Courier Journal, the city's vibrant betting public wouldn’t be satisfied with taking the first Saturday in May off.

In that dark hour, a hero emerged — the Kentucky Turtle Derby.

A group of Courier Journal and Louisville Times sports reporters were making plans for the annual Sports-For-Polio Fund at the time when a representative from the Forty and Eight Legion joined them to see how he could help. Somehow, some way, the group decided to host a “turtle derby,” according to then-Courier Journal assistant sports editor Ken Taylor, and organizers eventually landed on hosting the event at the Jefferson County Armory (the Louisville Gardens nowadays) and put the proceeds toward the Kentucky Society for Crippled Children.

The Jefferson County Armory was packed with 6,500 people, according to Taylor's coverage on May 6, and the crowd put up $11,483 in bets on the eight 20-foot races. Vendors were turning bettors away at the windows before races, Taylor wrote, in order to meet the Armory's midnight curfew.

The final race of the night, the “Derby,” brought in the most money at $1,729, and Broken Spring took home the turtle equivalent of the rose garland with a scorching time of 1:20.3. But the fourth race of the night may have had the most drama — Journeyman Printer won it with a time of 4:59.1, and five of the seven turtles who held the lead at different points ended up turning around and heading back toward the starting gate.

Money raised from tickets, entries, programs and sponsorships went to children who needed it, according to Taylor's article (which was indefensibly buried on page five of that Sunday's sports section), and the Kentucky Turtle Derby continued as an annual event into the 1950s.

The 1945 Derby came back from the dead on June 9, 1945 and was contested on a very muddy track after Louisville was deluged with rain for several days. The winner had the riding services of legendary jockey Eddie Arcaro, who sent his colt to the lead early in the proceedings and simply ran away from the field of fifteen other horses. The victor claimed the trophy after winning by six authoritative lengths in front of 65,000 fans and paid $9.40 to win (almost 4-1).

The name of the winning horse was Hoop, Jr.

His owner was businessman Fred Hooper of Montgomery, Alabama.

Hooper was born in Georgia in 1897. Among other things his professional resume included school teacher, prizefighter and potato farmer. Hooper became wealthy in the construction business and purchased about 5,000 acres near Montgomery and began to breed champion Hereford cattle. Later in life he built the Circle H Farm of over 1,000 acres in Ocala, Florida, which became his home base as a thoroughbred breeder. Hooper died in Ocala in 2000.

It is safe to say that Hooper became attached to thoroughbred racing when Hoop, Jr. won the Kentucky Derby, after all, the colt was the first thoroughbred Hooper ever purchased. How can one not fall in love with racing when the first horse you buy wins the most prestigious race in the world? After the Derby Hooper supposedly said, “I never thought I'd make it this quick.”

Hoop, Jr. cost his owner $10,200 in 1943. He was sired by Sir Gallahad III, a successful runner in France that became an influential sire. After the Kentucky Derby Hoop, Jr. finished second in the Preakness and was then retired due to injury. He never replicated himself at stud and was pretty much a disappointment in the breeding shed.

Hooper and Hoop, Jr. were remembered in 1987 when the Birmingham Race Course opened and conducted its first thoroughbred race meeting. The track ran the “Hoop, Jr. Stakes” which was the prep race for the Inaugural Alabama Derby. Lost Code won the Hoop, Jr. and a few weeks later won the first Alabama Derby. Lost Code became a prominent three year old in America that season. He eventually battled in an epic Haskell Invitational at Monmouth Park in New Jersey against Bet Twice and former Horse of the Year Alysheba.

Fred Hooper held a prominent name in thoroughbred racing for many years. He was a member of The Jockey Club, an honorary director of the Breeders' Cup, and one of the founders of the Thoroughbred Owners and Breeders Association and one of its first presidents.

Hooper owned many great runners. One of which was Precisionist (one of my personal favorites), who was a thrilling and highly competitive runner best at sprinting even though he could go longer distances. Precisionist owns the highest Beyer Speed Figure in the history of the Breeder’s Cup when he won the six-furlong Breeders’ Cup Sprint at Aqueduct in New York in 1985. Precisionist was inducted into racing’s Hall of Fame in 2003.

Hooper’s local contributions are many but one in particular is Hooper Academy, a private school established in 1970 in south Montgomery County near the land that was owned by Hooper. He also built Hooper Stockyards in Montgomery.

Now, forever etched in memory is the reason for the Derby delay in 2020. Like other racing aficionados I just hope the Kentucky Derby scheduled for the first Saturday in September is safe from delay.