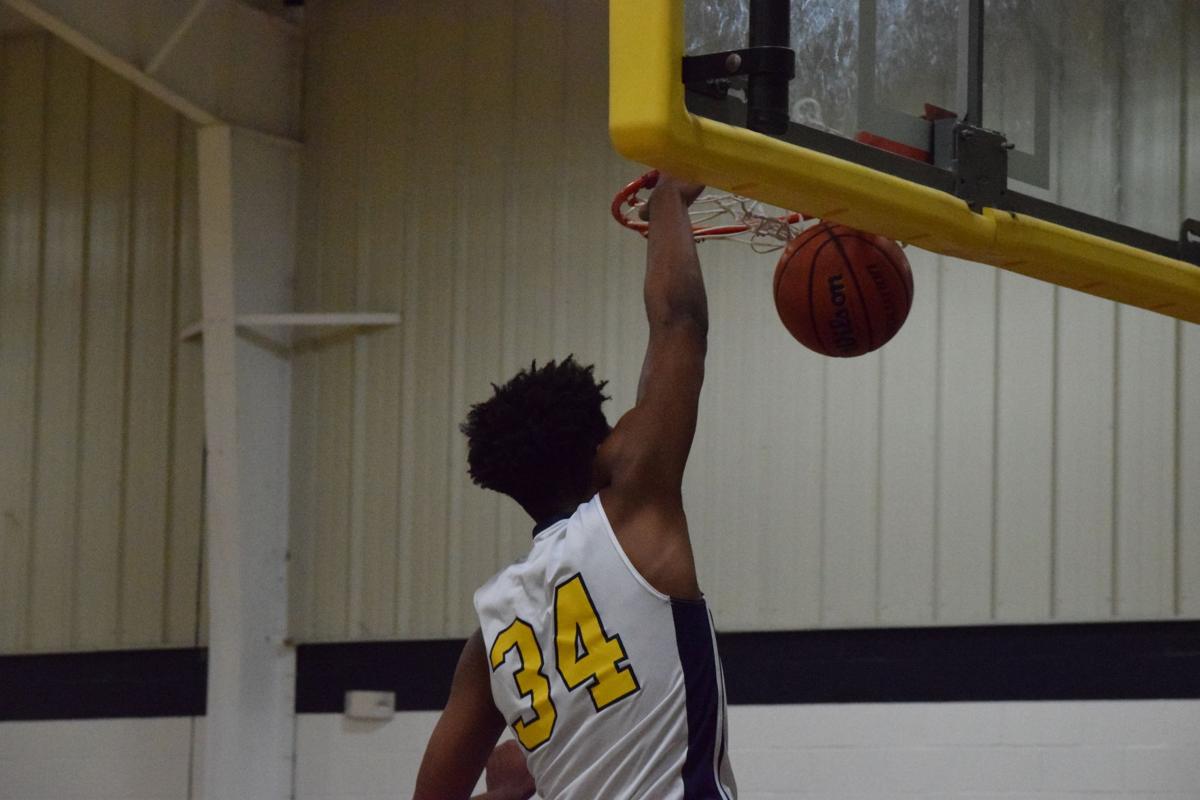 Success Unlimited Academy's Darrion Salery slams through one of his three field goals in Thursday's game. 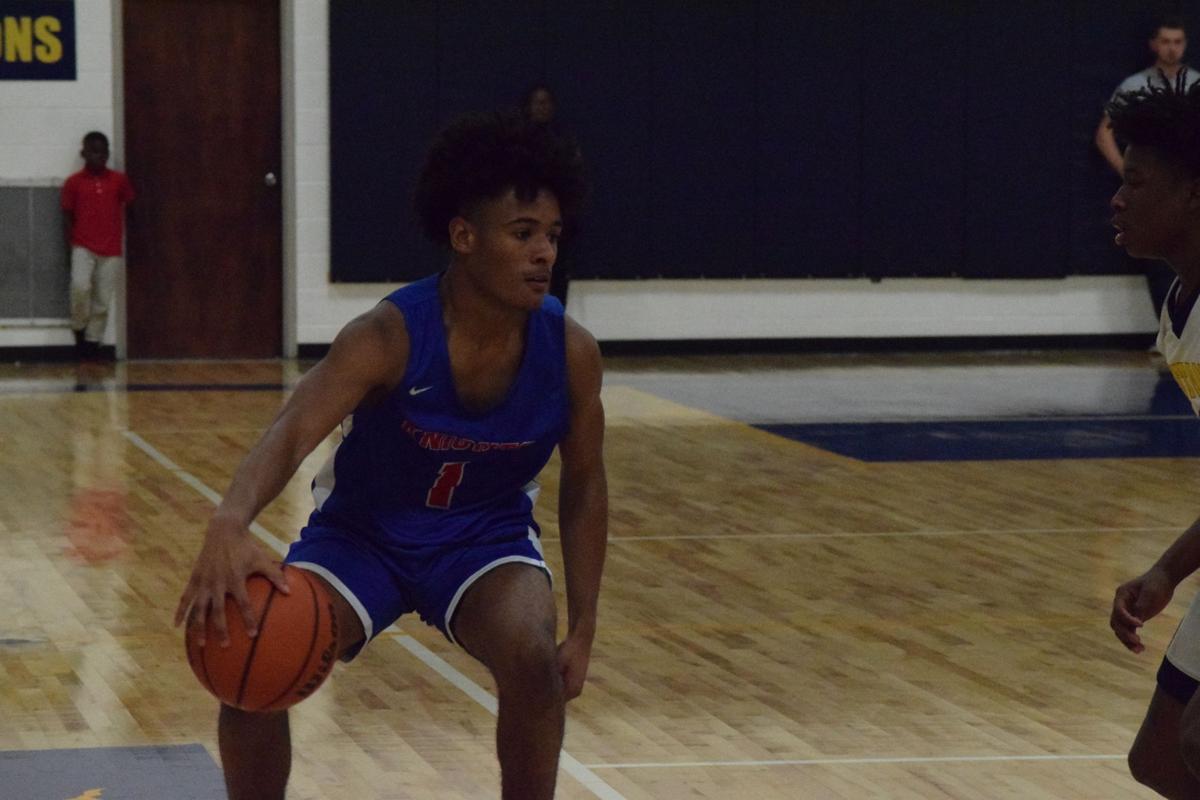 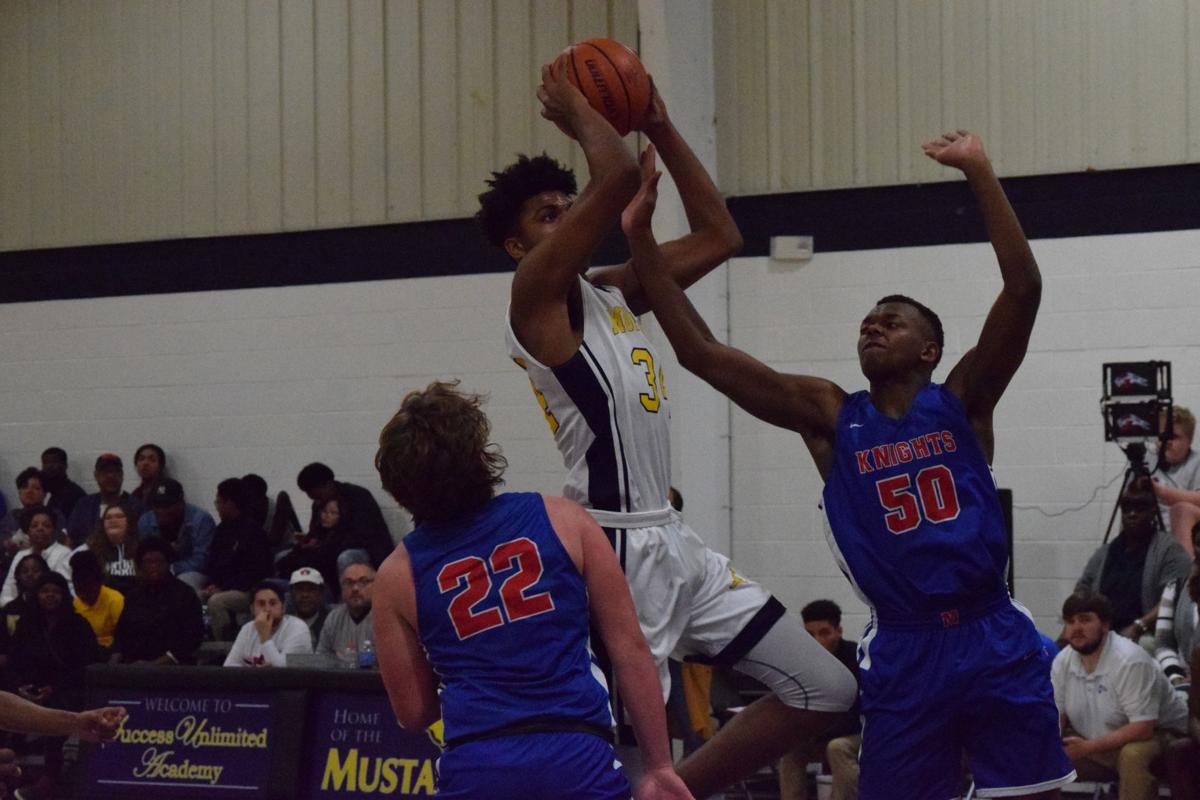 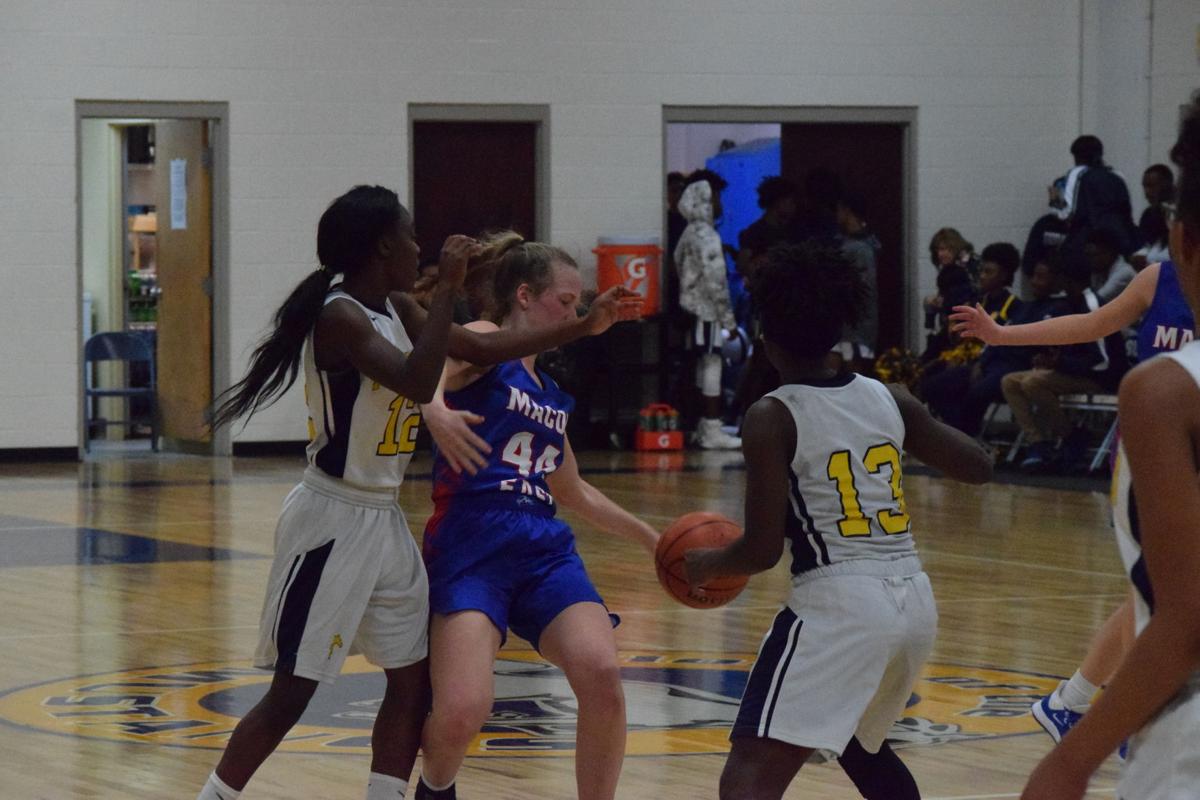 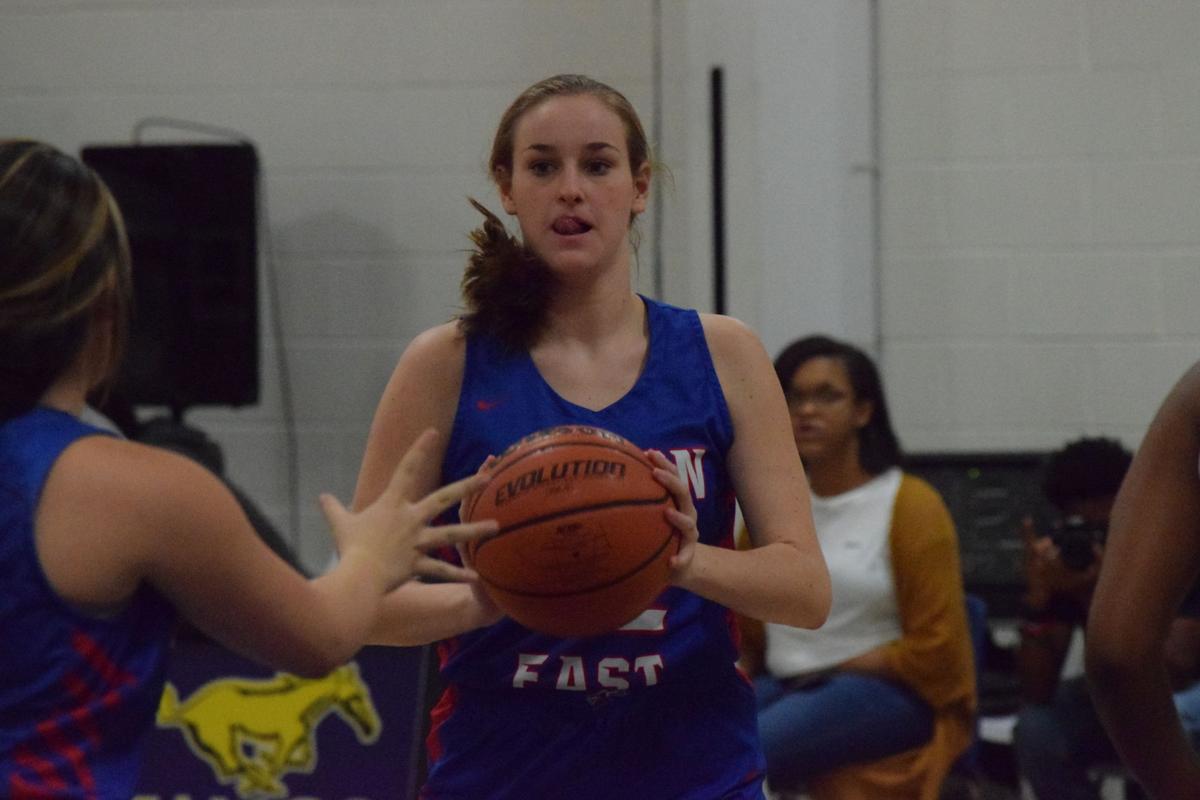 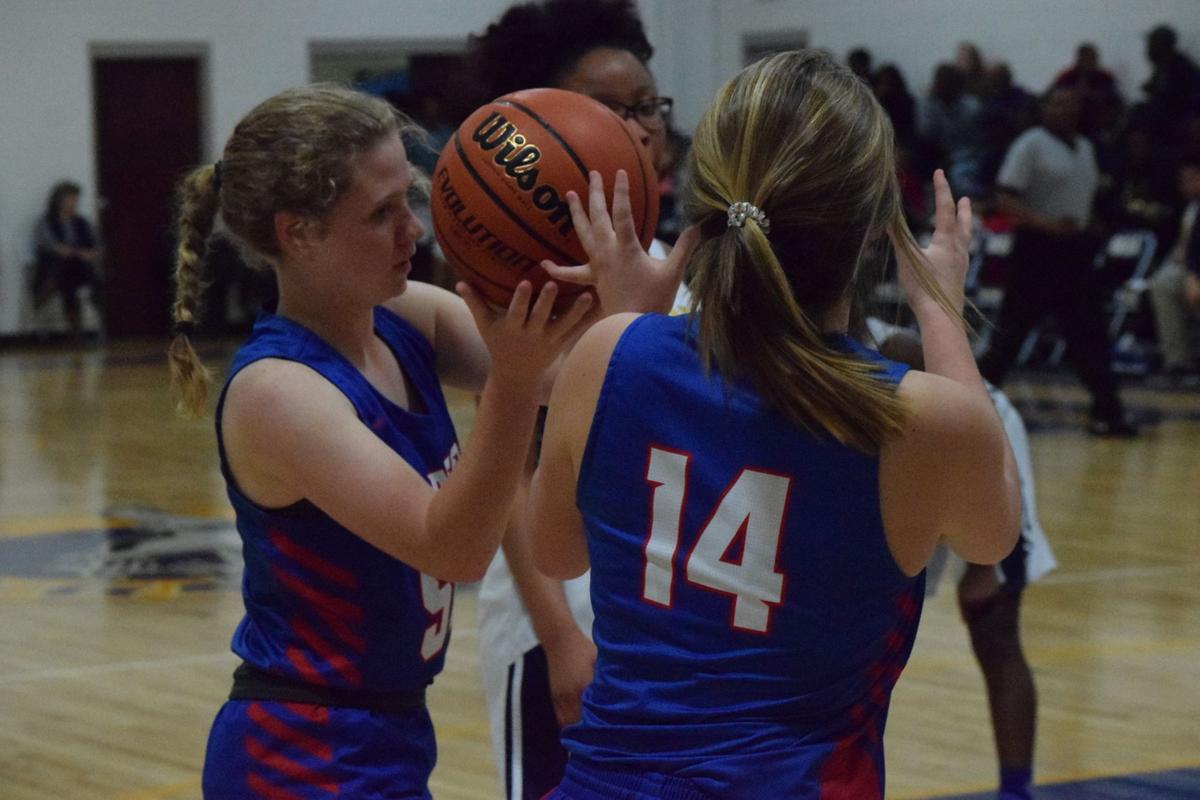 Success Unlimited Academy's Darrion Salery slams through one of his three field goals in Thursday's game.

After several weeks of trying to replace Armani Burton’s ball-handling skills and leadership from last year’s state tournament team, Success Unlimited Academy coach Stacey Foster figures this year’s squad might end up with a different identity than he planned.

“Losing my best player, that took away that leader and a lot of offense,” Foster said. “I told them we’re just going to have to pressure teams and get some steals here and there, make teams make bad decisions and keep them shaky for the most part. That’s us. That’s how we’re going to have to play.”

It’s not a style of play Foster enjoys and it doesn’t seem suited to a team that features two strong post players, but it’s hard to argue with the end result as the Mustangs reeled off their seventh win in eight games with a 31-27 victory over Macon East Academy in the SUA gym on Thursday night.

The Mustangs rebounded from their first loss on Tuesday to Tuscaloosa Academy with a strong inside presence early as Matthew Perkins scored eight first-quarter points in the paint and Darrion Salery added four more, but the pair would have just one field goal the remainder of the game.

Macon East, meanwhile, fought through the early post advantage of the Mustangs and forged ahead to a 21-17 halftime lead, only to struggle in a nightmarish second half that featured just two points in the third quarter and four more in the fourth.

“It was more so us,” Macon East Academy coach Lincoln Glass said. “The games that we’ve lost, we’ve hurt ourselves by turnovers. I just told our guys, when we start doing the little things, we’ll get over this hump and we’re going to be a dangerous team.”

Success guard Deontay Davis had a huge 3-pointer with 3:48 remaining to break a 25-25 tie. In a defensive game where every point mattered, Jordan Daniel broke free for a layup to cut into the Success lead, but the Knights would get no closer. Success went just 3 of 9 at the free-throw line in the fourth quarter, but the presence of Perkins and Salery made it difficult for the Knights to rally at the end.

“Our guys battled,” Glass said. “At the end, what cost us the game, was on the free-throw line, just not boxing out and doing the little things. That’s due to their size and their aggressiveness.”

And while the Mustangs’ win over Macon East didn’t follow Foster’s script, his team is starting to develop a reputation for its defensive ability.

“That’s a well-coached team, a lot of athletes,” Foster said of the Knights. “I can’t be mad at the effort. Everything didn’t go how I wanted it to, but when we hold a team (to 27 points) like that, it’s kind of hard to get mad at anything.”

Emily Nickles had 21 points and 13 rebounds as the Knights jumped out to a 22-2 lead at the end of the first quarter and a 42-4 halftime lead in Thursday’s game.