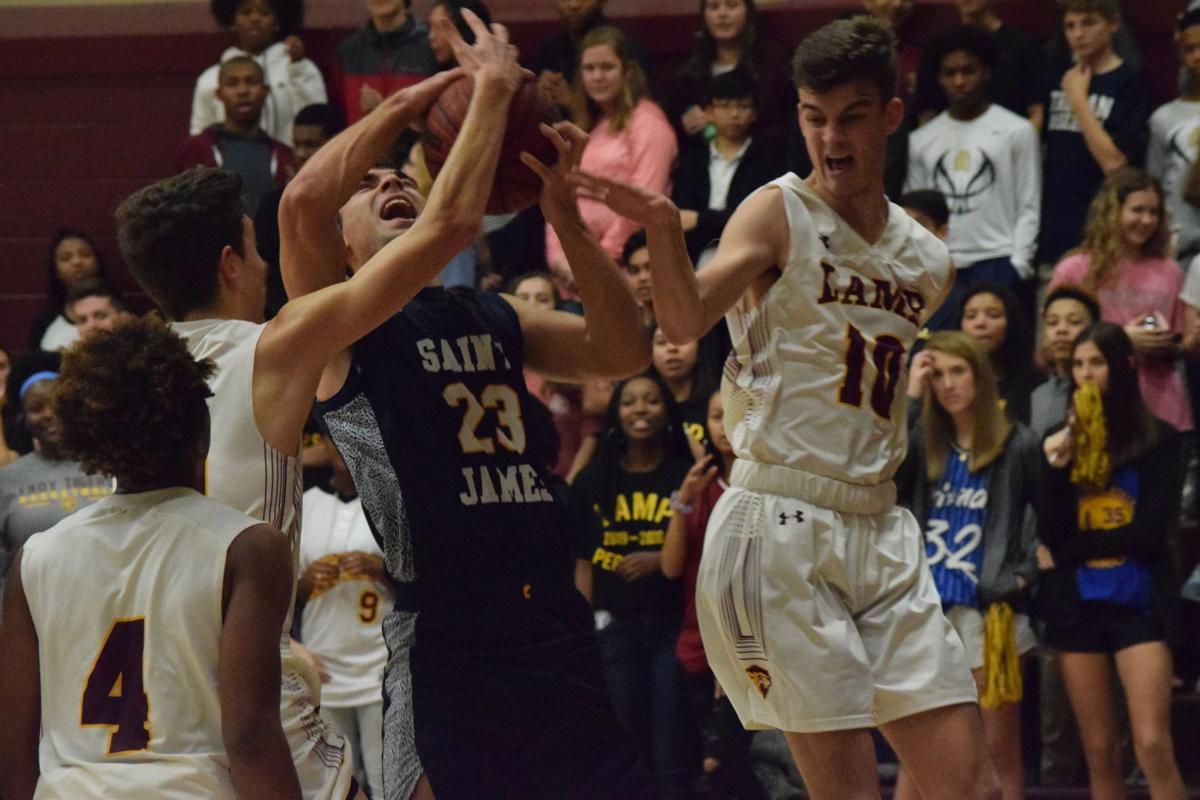 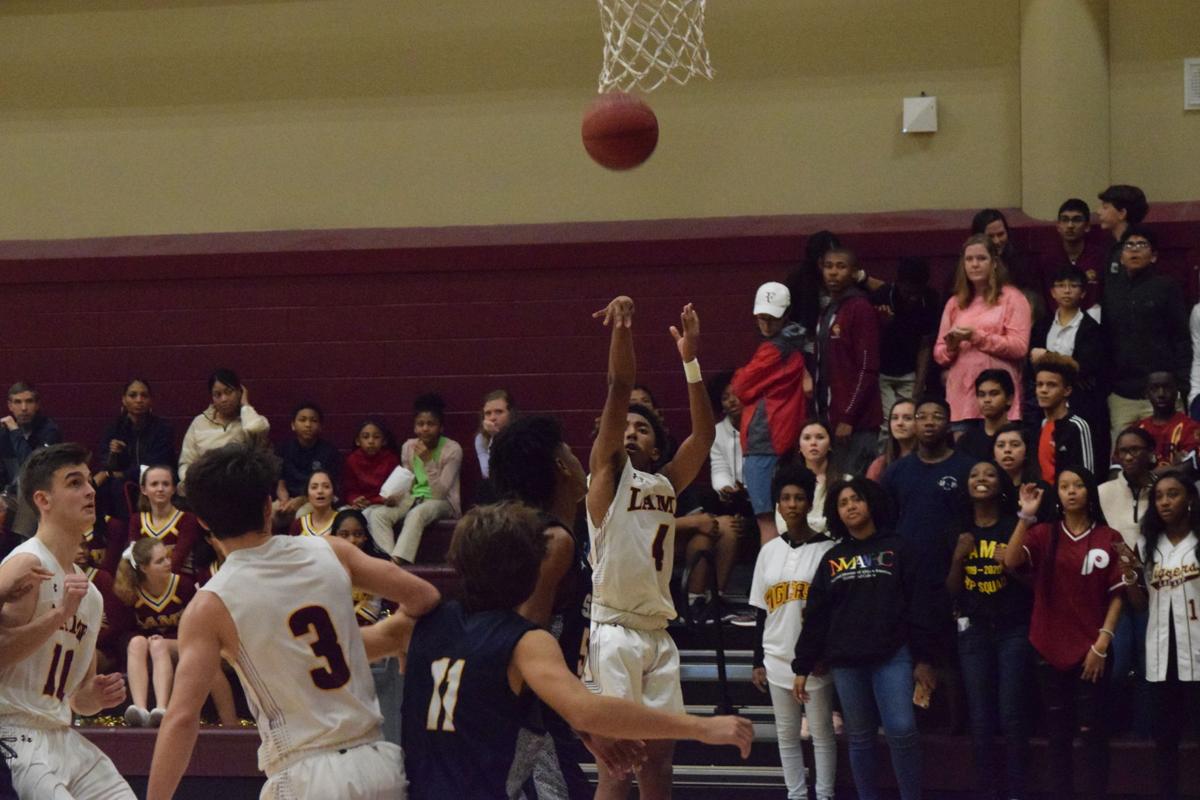 LAMP's Felix McGhee hits for two of his 16 points. 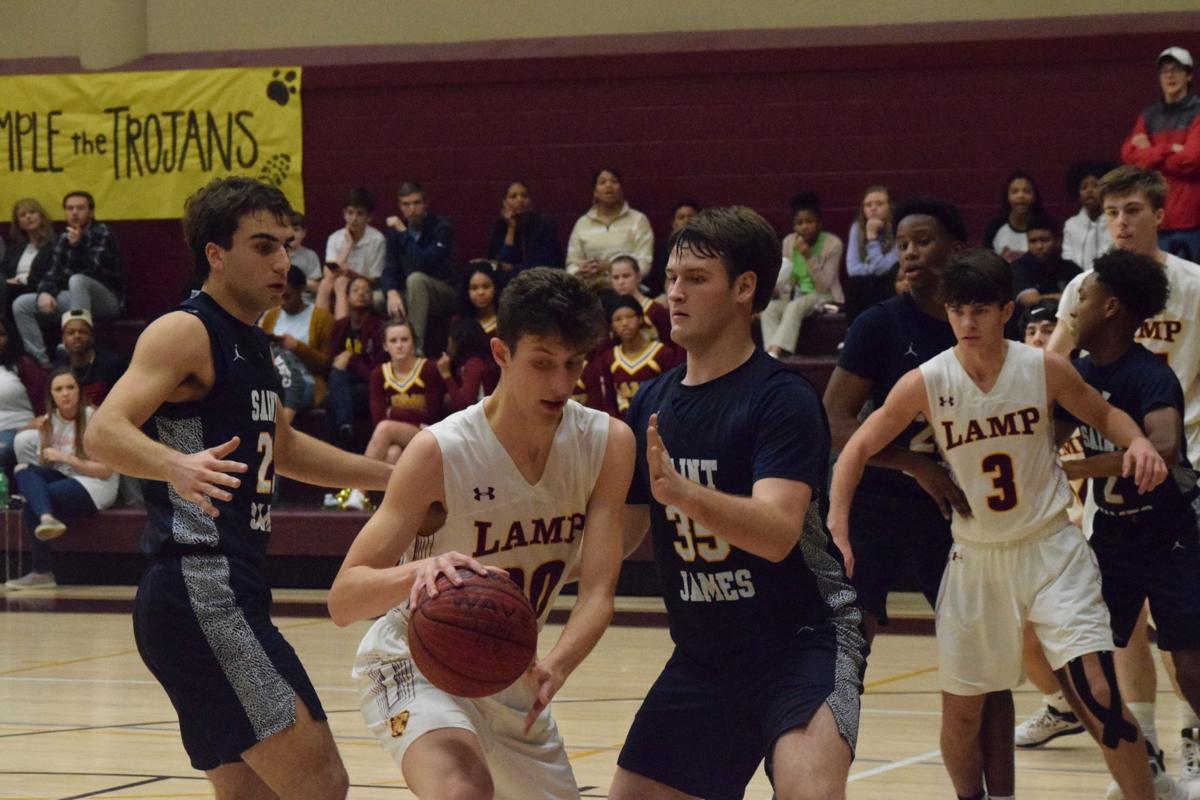 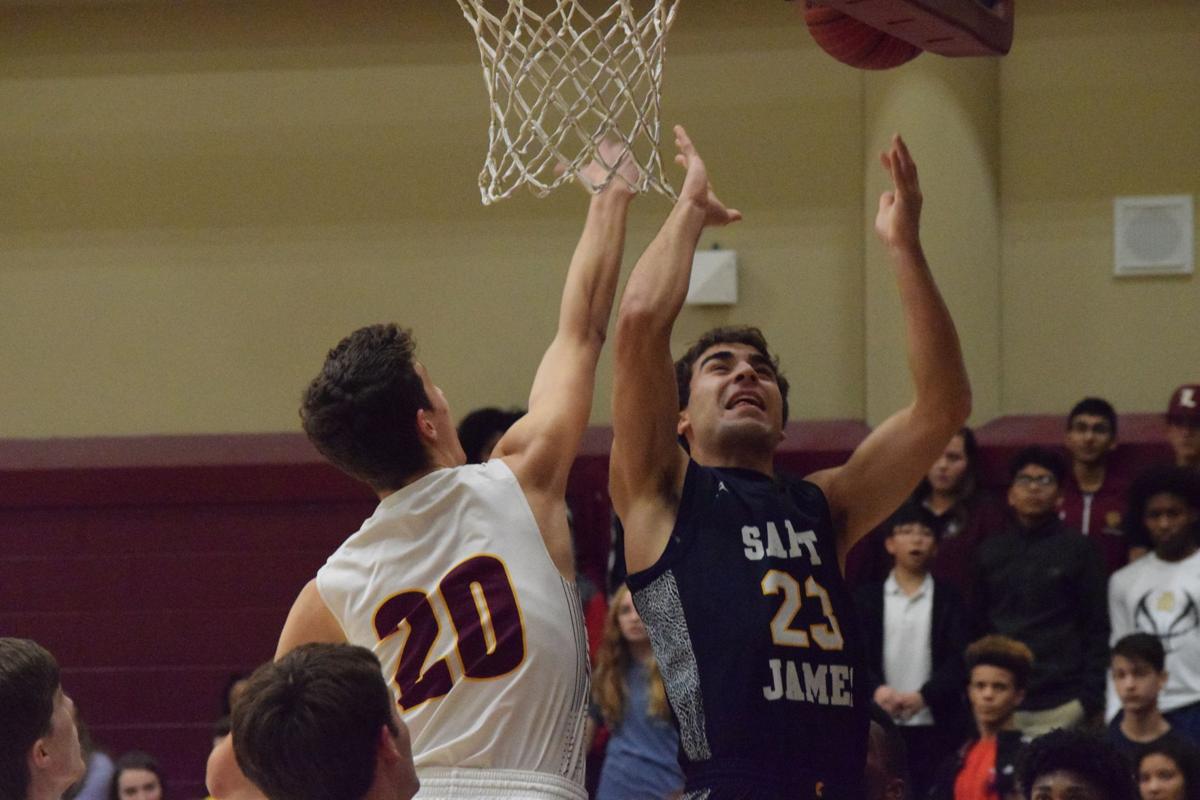 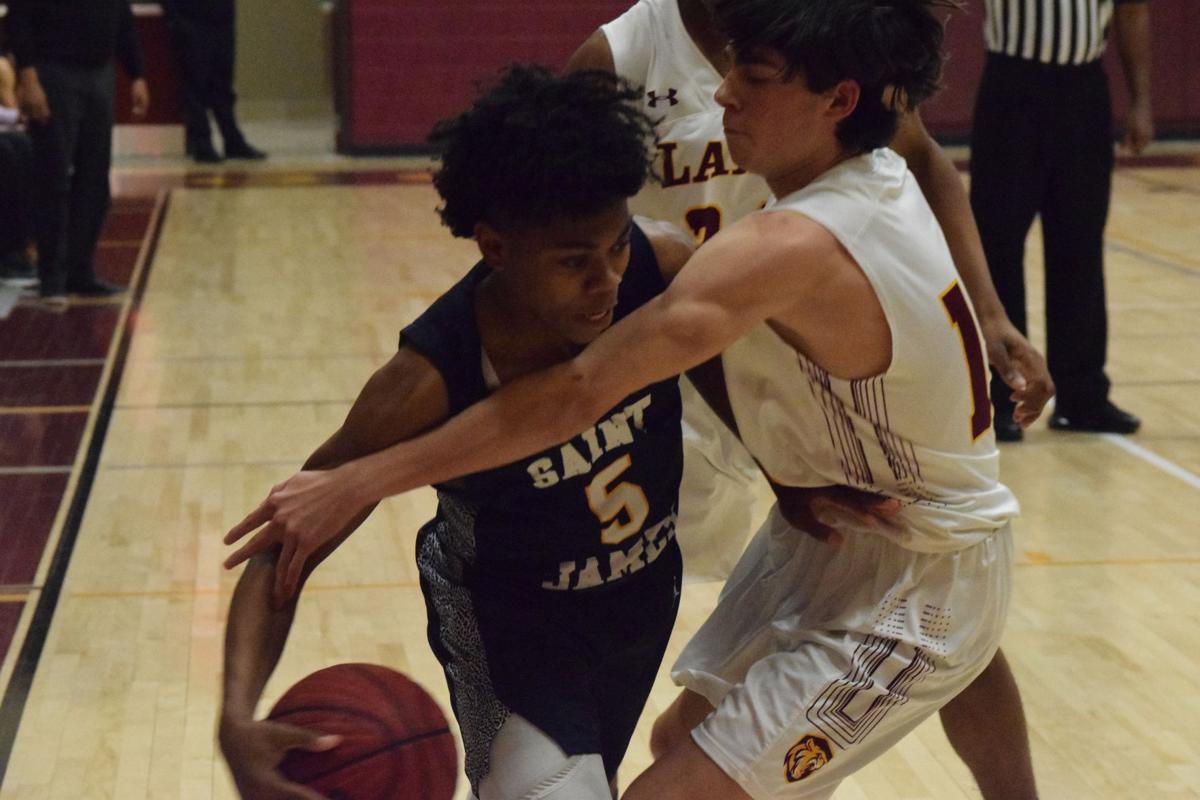 The path to the baseline for St. James' Bradley Thomas is cut off by LAMP's Mitchell Sloane. 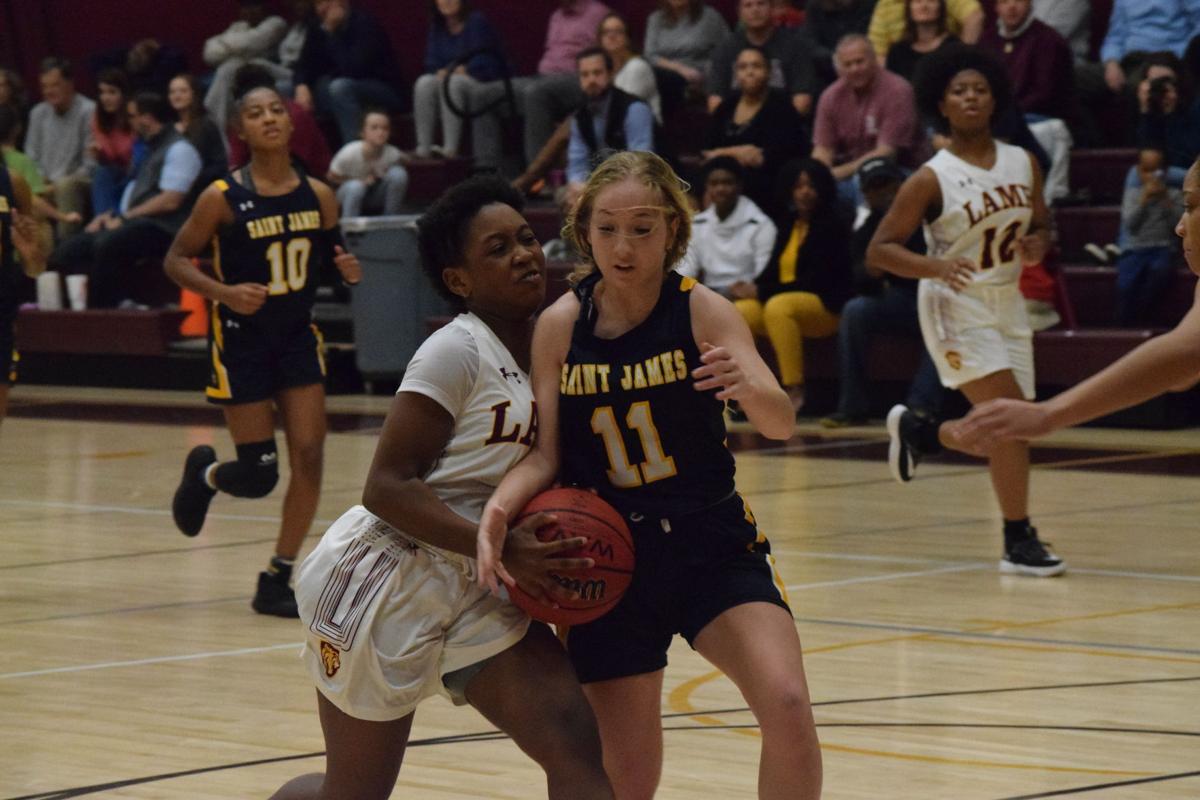 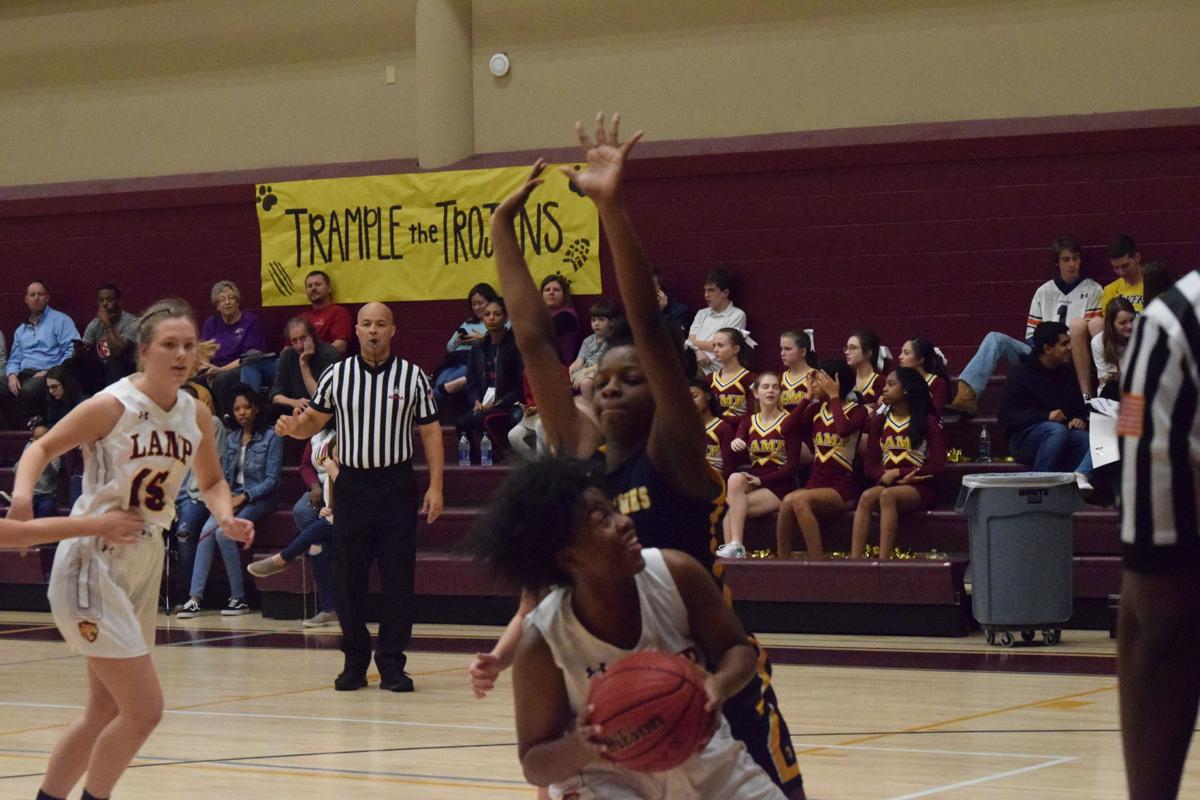 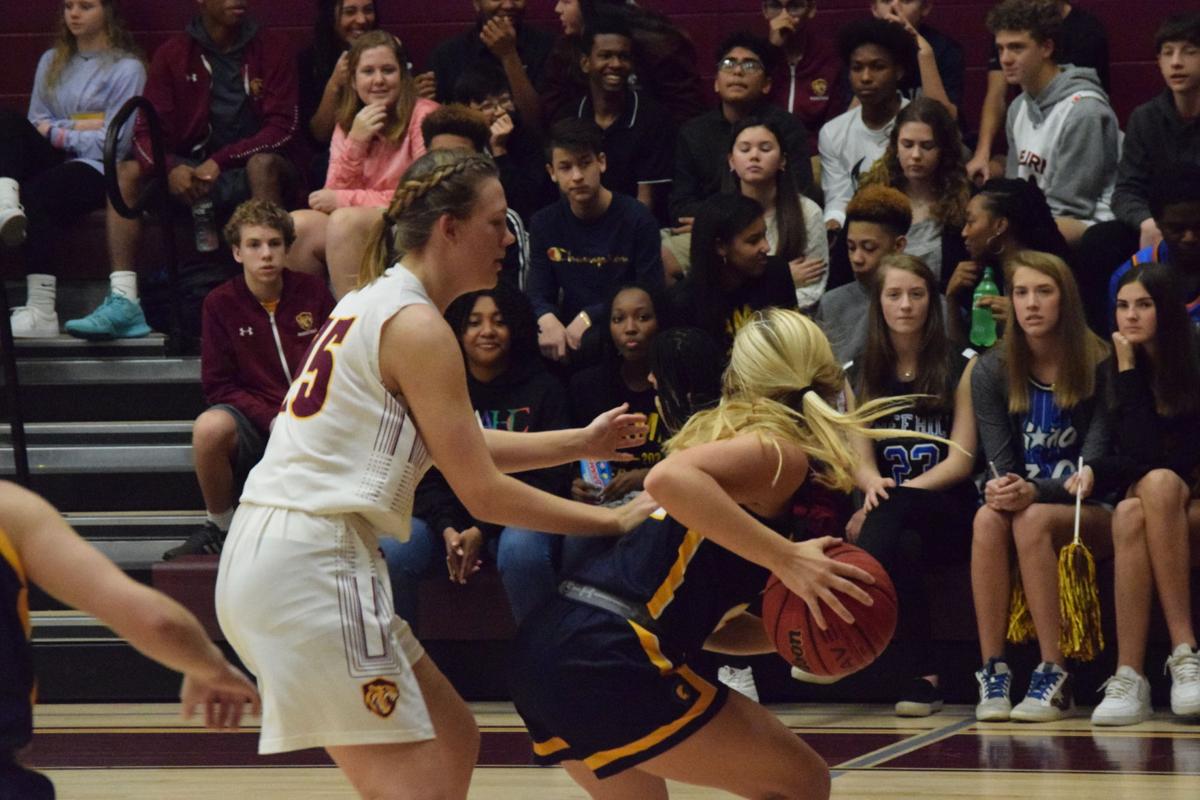 St. James' Morgan Parish tries to bring the ball up the court against defensive pressure from LAMP's Ainsley Klein. 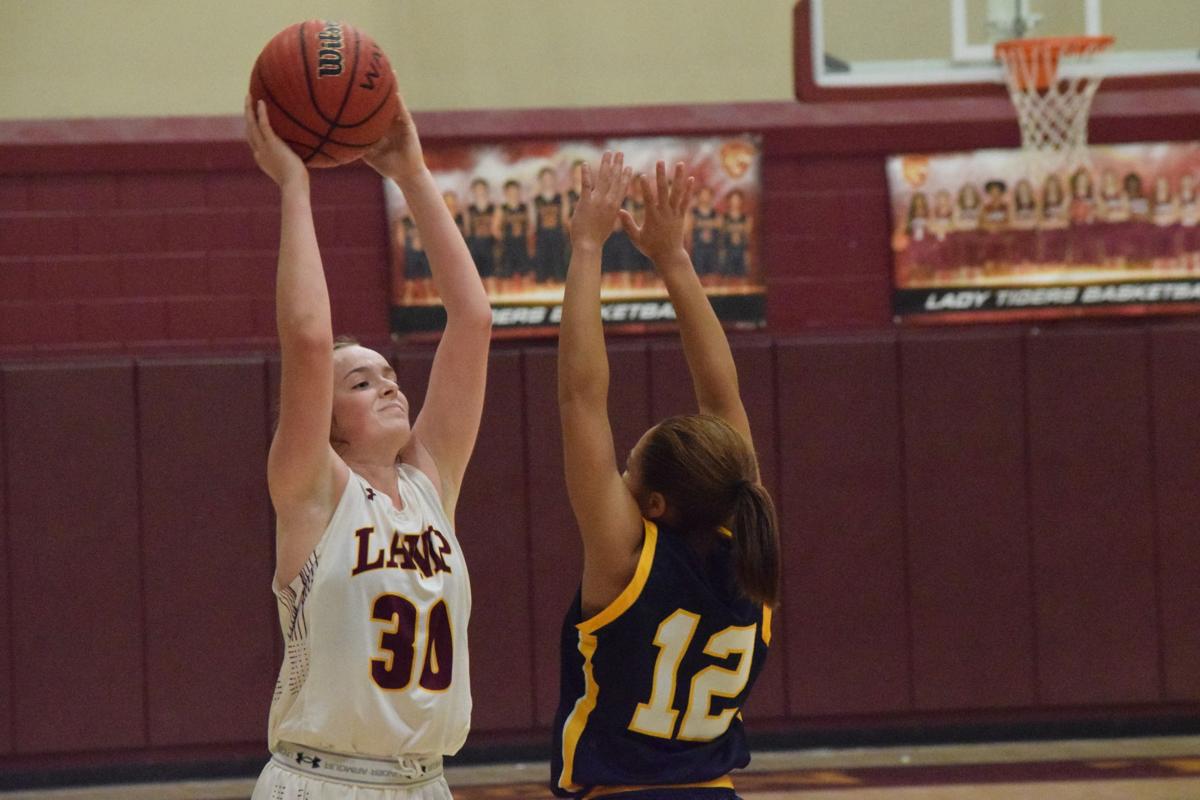 LAMP's Felix McGhee hits for two of his 16 points.

The path to the baseline for St. James' Bradley Thomas is cut off by LAMP's Mitchell Sloane.

St. James' Morgan Parish tries to bring the ball up the court against defensive pressure from LAMP's Ainsley Klein.

Friday’s game between St. James and LAMP followed a familiar script for both teams.

The Trojans fell behind early but relied on a solid defensive effort and a scrappy offense to never fall too far behind and eventually take a lead in the second half.

The Tigers took an early lead, watched their offense evaporate as starters were rested, fell behind in the second half, rallied late and fell short in a 60-57 defeat in the LAMP gym.

LAMP coach Marcus Townsend felt his team was making strides to become a dangerous team after watching the Tigers lose in overtime to 6A Stanhope Elmore a day earlier. By the end of Friday’s game, all the optimism had evaporated.

“We definitely took a step back,” he said. “Primarily, I think that’s because I probably played Quinn (Sloane, who is recovering from a nagging ankle injury) too much (on Thursday). I don’t think he was 100 percent tonight. He still played well. But I’ll be honest with you, I just can’t afford to take those guys (starters) out. If I ever try to rest them, our chemistry falls off a little bit.”

LAMP had an eight-point lead early, but when Townsend tried to rest starters, the Tigers fell apart on offense and St. James rallied to but the deficit to 22-21 at the half. The Trojans continued to play well in the third quarter, extending a lead to 10 points before LAMP scored the final seven points of the quarter to set up the finish.

All of the LAMP starters struggled to find any rhythm, hitting just four 3-pointers in the contest and missing layups after adjusting their offense to drive toward the basket.

“I always try to put the onus on the coach, but I can’t shoot it for them,” Townsend said. “I thought we were in position to take control of the game. We did miss a lot of gimmes. And you can’t miss those at all, but especially in January.”

The burden fell on the Tigers’ sixth man, junior guard Felix McGhee, to keep LAMP in the game as he rallied the Tigers with 16 points, four assists and four steals.

“He’s a confident kid and he doesn’t mind having that pressure on him,” Townsend said. “I give him the green light to shoot it because he can shoot it. I think Felix is going to help us out a lot as we go on through this season.”

St. James, meanwhile, continued to plug away on offense and stay in front with rebounding and defense. Andrew Sadie, who finished with 19 points, was a solid influence on both ends of the court, draining a huge 3-pointer from the corner midway through the fourth quarter and sinking a pair of free throws with 10.2 seconds left to provide the final margin.

“Andrew made some big plays down the stretch – the drive, the 3-pointer and the free throws, of course, that really gave us a chance to win the game,” St. James coach Nigel Card said. “But, you know, the mistakes were about (his players’) youth, inexperience. The jump shot in the corner with a seven- or eight-point lead, you don’t do that when they’re in a chase mode. You learn how to use the clock without letting the other team understand that’s what you’re trying to do. But this team doesn’t understand those kinds of things yet.

“They understand how to play and they play extremely hard. But they have not learned how to win. And there are little things you have to do down the stretch to win the game. You can’t keep shooting yourself in the foot and give away opportunities to close a game out.”

On Friday, however, the Trojans were able to close out the game, using Sadie’s free throws to extend the lead to three points, then extending their defense in the final seconds. Micah Boone still managed to get off a shot ahead of the buzzer but – in a testament to LAMP’s struggling season – it bounced harmlessly off the rim.

“Regardless of our record, we have gotten better from the first game,” Card said. “This is what I told the guys – get in a rhythm and understand how to win and I’m going to tell you, teams will not want to face you down the stretch. You could be that kind of team.”

Bradley Thomas led St. James (7-6) with 19 points. The Trojans’ game with Prattville Christian on Saturday was postponed because of inclement weather. They return to action on Tuesday at Bullock County in a 3A Area 5 matchup.

Sloane followed McGhee in scoring with 12 points and five rebounds for LAMP (8-13), followed by Boone with 10 points and six rebounds. The Tigers remain home to face Catholic in a 4A Area 4 game on Tuesday.

Hannah Grace Griggs scored 14 points to lead a balanced attack against the Tigers on Friday night in the LAMP gym.

St. James used 3-pointers by Griggs, Makenzie Corley and KK Hall to grab a quick 15-6 lead as the Trojans built a 20-point lead at the half by holding the Tigers to 10 points. The Tigers struggled to find any offensive consistency throughout the night, converting just one field goal in each of the final three quarters.

Liz Klein’s 3-pointer was the only basket for LAMP in the third quarter as the Trojans extended their lead to 43-16. Hall added 11 points as six of the nine Trojans scored at least five points in the game.

Aariel Johnson had six points to lead LAMP (2-15). The Golden Tigers play host to Catholic in a 4A Area 4 game on Tuesday.