Skip to main content
You have permission to edit this article.
Edit
Home
News
Sports
A & E
Opinion
The Whirl
Legal Notices
School
1 of 6 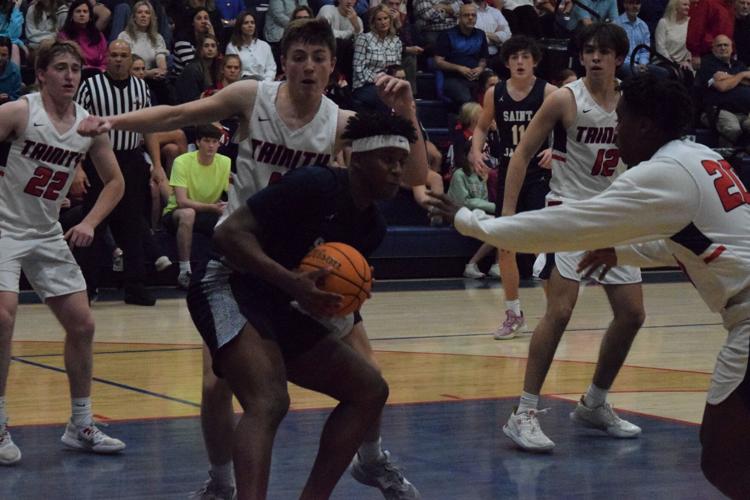 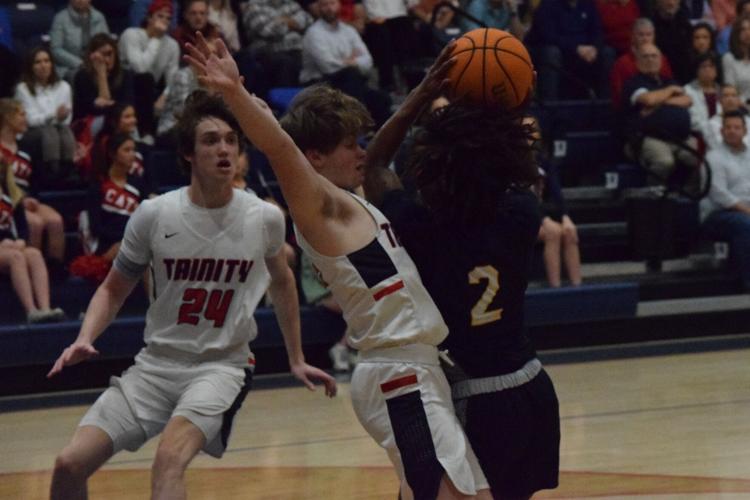 St. James' guard Ethan Beard drives in for a layup as Trinity's Mac Stewart tries to draw the charging call. 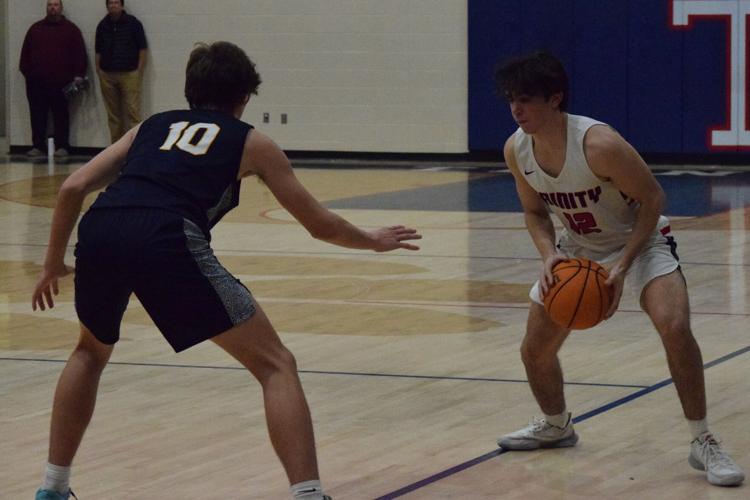 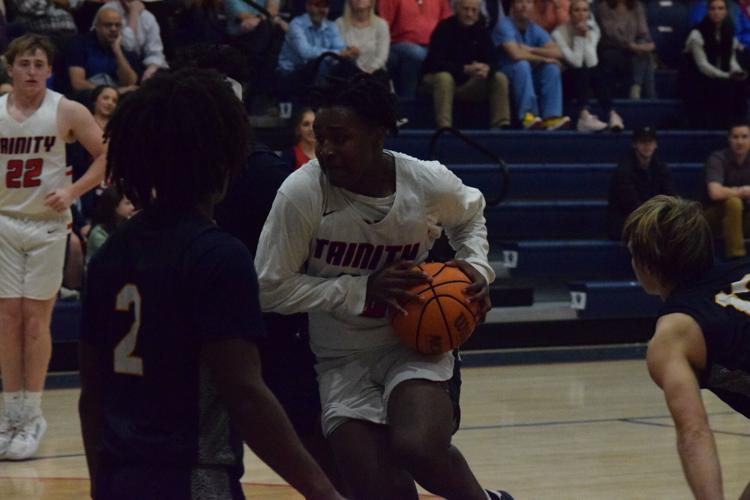 Trinity's Chris Jackson drives through the lane in the foruth quarter of Tuesday's game with St. James. 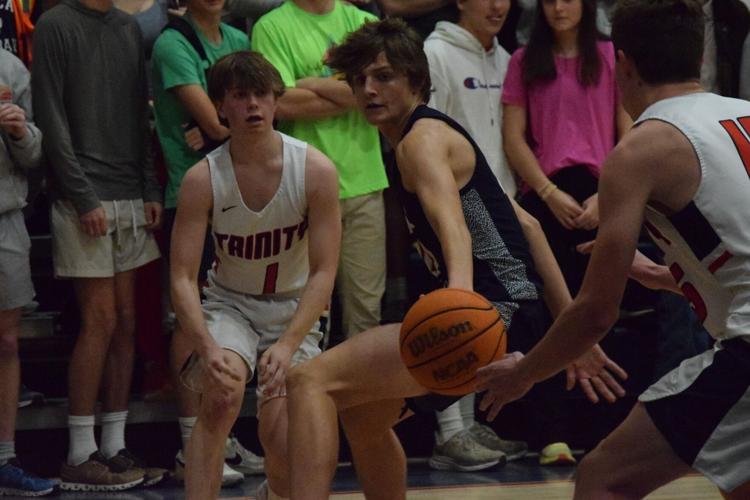 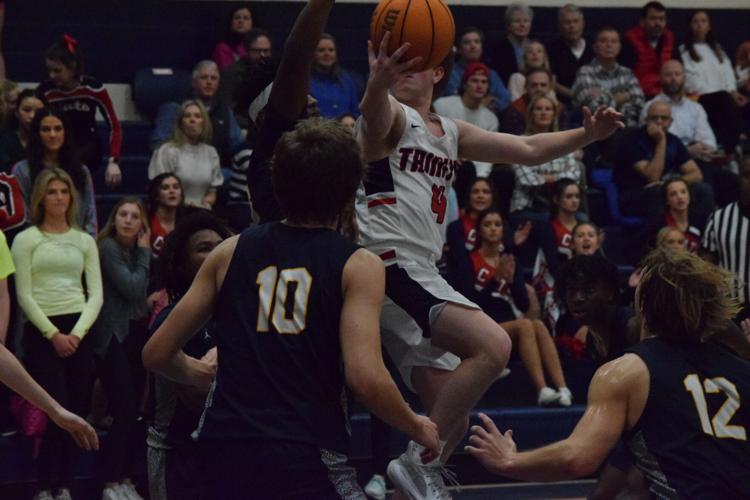 St. James' guard Ethan Beard drives in for a layup as Trinity's Mac Stewart tries to draw the charging call.

Trinity's Chris Jackson drives through the lane in the foruth quarter of Tuesday's game with St. James.

For the first eight minutes of the game, Trinity’s offense kept the Wildcats even with St. James, pouring in shots from all corners of the court.

But even as Matt Arrighi watched his team maintain a slight lead in a back-and-forth game, he knew the outcome would be decided in the paint. And in that department, the Trojans had a decided advantage in KJ Jackson.

Trinity’s John Morris and Jackson Taylor stayed in foul trouble much of the evening and fouled out midway through the fourth quarter, tilting the advantage to St. James in a 59-45 victory for the Trojans at Captain Jack Court on Tuesday night.

“It was massive that our two post guys were in foul trouble all night,” Arrighi said. “When those two guys aren’t in the game, it makes it really difficult on us. I thought our guys did a really good job of fighting and trying to keep it close. We kept it close with our two ‘bigs’ out, we were down five or six, then we get them back in the game and they both immediately pick up their fourth foul, then they both pick up their fifth foul.”

The two teams were even until Ethan Beard’s shot put the Trojans in front 21-20, triggering an 11-0 run late in the first half by the Trojans that started by shutting down the Wildcat offense.

“We started to mix it up a little bit,” Card said. “We started to go man with certain groups and zone against certain groups and mix it in and out just to try and gain some type of advantage on the defensive end. I thought they had us spread out in the first half and we made some mistakes, particularly on the baseline, and gave up some easy shots. We couldn’t afford to continue to give up those kinds of shots the rest of the night.”

The Trojans eased out to a 30-21 halftime advantage they would maintain the rest of the game. Trinity but the deficit to three points once and four points a little later, but Morris picked up his third foul trying to contain Jackson 78 seconds into the second half and Taylor picked up his fourth in the same situation just seven seconds later.

“It’s big on both sides,” Arrighi said. “Not only are those two guys two of our best offensive players, we don’t have the size to match up with them inside when they’re out of the game. I think our post players probably played a combined four minutes in the second half. That’s just hard for us to compete with St. James, who has two excellent post players.”

Less than two minutes later, Taylor picked up his fifth foul and joined Morris on the bench.

“I don’t feel like we got some breaks in the calls, but that’s how it goes sometimes,” Arrighi said. “You hate for that to be on your home floor, but that’s basketball.”

Jackson assisted on the next three baskets and the Trojans extended the lead to 16 points. Jackson finished with 13 points, followed by Beard and Clint Houser with 11 points each, Paxton Wingard with 10 and Middleton with nine.

“KJ is a different player from a year ago,” Card said. “He’s gotten bigger, he’s so much stronger and he’s more intentional when he receives the ball. He’s definitely going to try to score. I like the fact he’s being super aggressive. He was big tonight and Matt was, too.”

Cal Bennett led Trinity with 10 points. Morris had six and Taylor had four as the Wildcats (14-6) dropped to 1-2 in area play heading into Friday’s Coaches vs. Cancer Classic at Montgomery Academy.

“Obviously, we’re extremely disappointed to be 1-2 right now,” Arrighi said. “But we can’t control the past. We’ve got to look ahead. You win out the rest of your games, you’ve still got a chance to be tied for first place if there’s a three-way tie. We’re 1-2, but I still feel like we’re as good as anybody in this area. We just have to be playing our best basketball in the coming weeks.”