Skip to main content
You have permission to edit this article.
Edit
Home
News
Sports
A & E
Opinion
Obituaries
The Whirl
Legal Notices
School
1 of 7 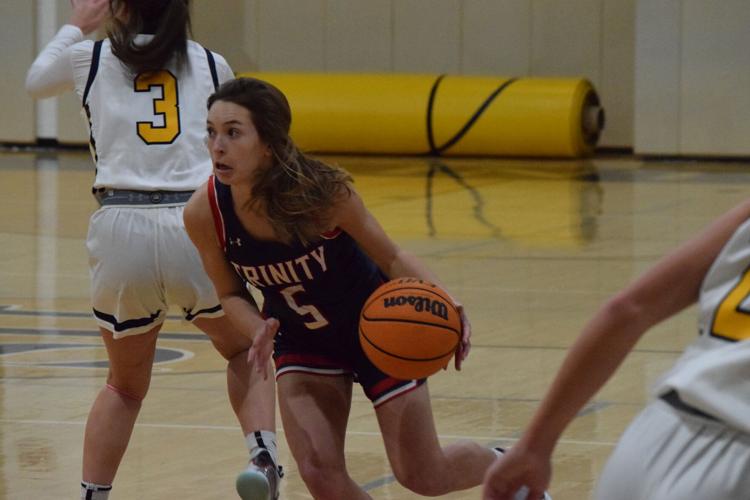 Trinity's Mary Alice Sasser picks her way through the Trojan defense in the second quarter of Monday's game. 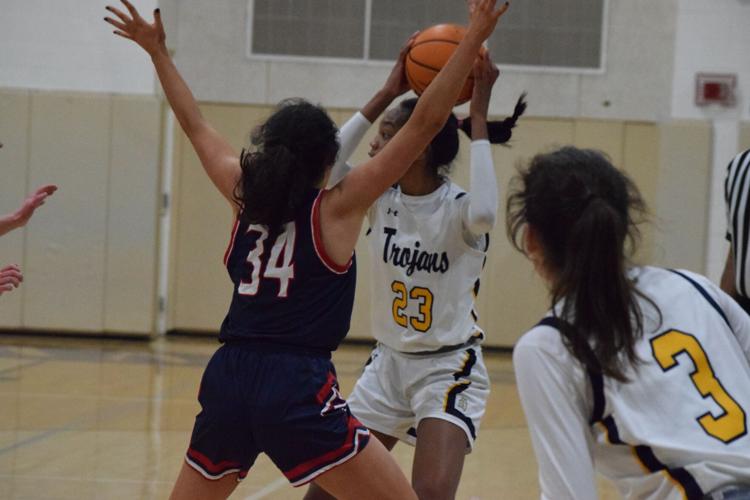 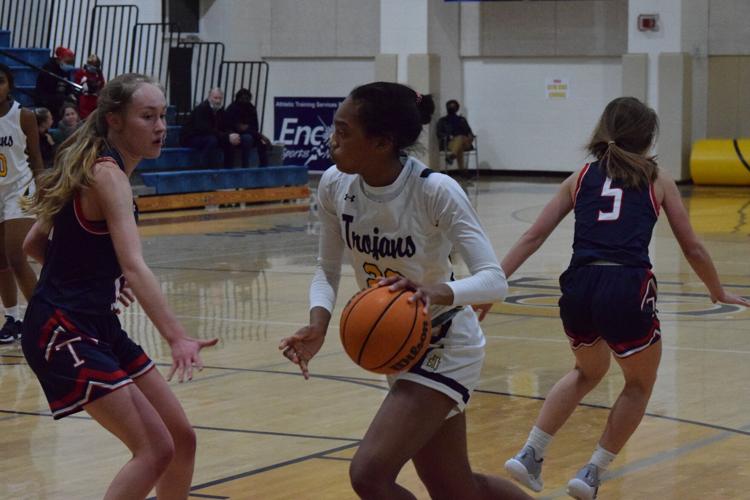 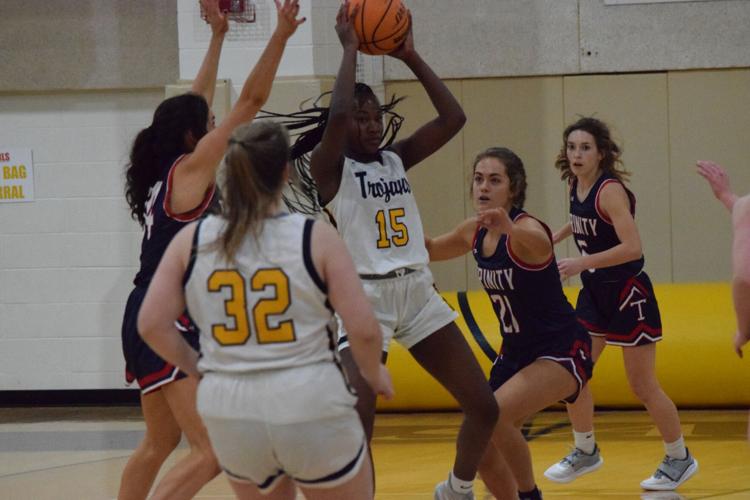 St. James' Danielle Greene comes down with the pass in a crowd of Trinity defenders. 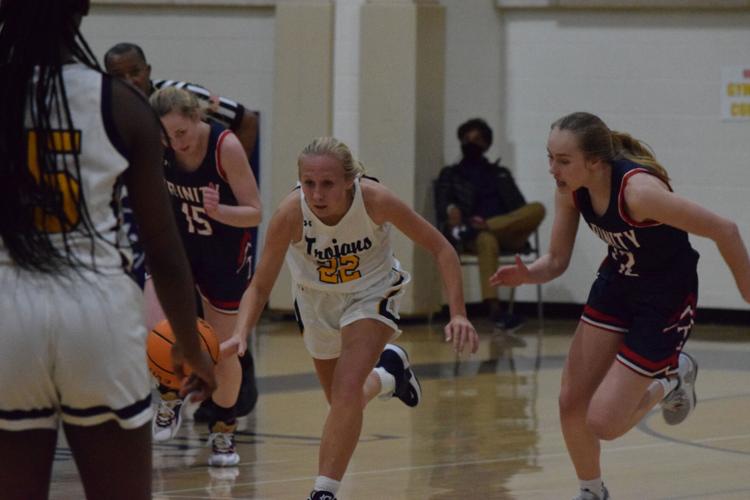 St. James' Katie Brightwell races up the court in an effort to get off a shot ahead of the horn to end the quarter. 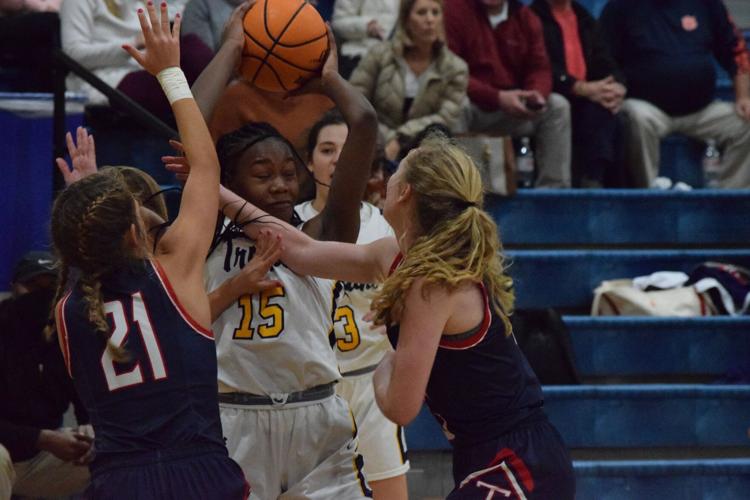 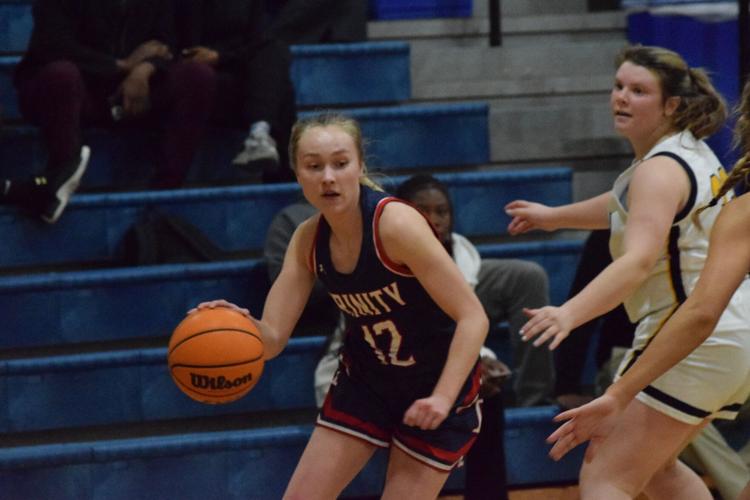 Trinity's Mary Alice Sasser picks her way through the Trojan defense in the second quarter of Monday's game.

St. James' Danielle Greene comes down with the pass in a crowd of Trinity defenders.

St. James' Katie Brightwell races up the court in an effort to get off a shot ahead of the horn to end the quarter.

It was a tense, tightly contested battle in the first minutes of Monday’s game between the Trinity girls and St. James.

Maybe it was the fact that both teams were a little rusty, cranking back up after a playing break for the holidays. Trinity also had to play without head coach Blake Smith, who was there before the start of the game but was a little under the weather and didn’t coach in Monday’s meeting.

Whatever the reason, the two teams were locked in a dead heat for much of the first quarter before Trinity guard Mary Alice Sasser started launching 3 pointers, giving her team an eight-point cushion it would maintain throughout the remainder of the game in a 46-32 victory.

“In the beginning, we did feel a little bit slow,” Trinity point guard Emma Kate Smith said. “Mary Alice was making shots in the beginning but I didn’t really make shots. It’s very nice to have Mary Alice making those. That’s a great game to come back (from the holidays) with, honestly, because we know St. James is always going to be tough and physical. It’s always a great game.”

Sasser scored 12 of her team’s 19 points in the first quarter, while Danielle Greene countered for St. James with eight first-quarter points as both teams battled evenly for most of the quarter before a pair of Sasser 3 pointers helped her team to a four-point lead entering the second quarter.

“I’m very grateful for that,” Smith said of her teammate’s contribution. “We talked about our press in the beginning, how we weren’t getting the steals and the looks that we normally get. Normally, we get those steals and run a little more smoothly but today it wasn’t working like that.”

The two teams continued to play evenly for most of the remainder of the game, with St. James taking advantage of post players Ava Card and Greene on one end of the floor and Smith sprinkling in a few points with Sasser to keep the Wildcats 10 or so points ahead.

Sasser finished with 19 points, followed by Smith with 14 points, seven assists and three blocked shots. Smith’s younger sister Maddie contributed nine steals and eight rebounds along with a 3 pointer in the first quarter for her only points.

“They ran a diamond-and-one on Mattie (in the second half) and we had to work with that because, honestly, we’re not used to seeing that,” Smith said. “But I felt like we worked it out well. Addie (Cherry) did a good job getting in the middle and knocking down that shot.”

Cherry finished with six points, all in the final 10 minutes to help the Wildcats extend the lead.

Greene had 12 points, followed by Card with six.

The game was a great tuneup for area play, which starts at the end of this week. Trinity (17-2) will host Montgomery Academy on Friday, travel to Prattville Christian the following Tuesday, then play host to Catholic three days later in a trio of 3A Area 6 games.

“(Assistant coach) Clinton (Adams) was like, ‘the grind starts tomorrow,’” Smith said. “That’s what we’re thinking. Today was a really good game for us because St. James is always good and they’re always physical, so it’s a good game to prepare us for the games we’ll play at the end of this week and next week.”

St. James (10-5) travels to Brew Tech on Saturday, then opens 4A Area 3 play the following week with a home game with Bullock County on Tuesday, followed by a trip to Tuskegee two days later to play Booker T. Washington.

The two teams were scheduled to play a boys’ game as well, but St. James was missing several players with a flu bug and canceled Monday’s game. A makeup date has not been set.