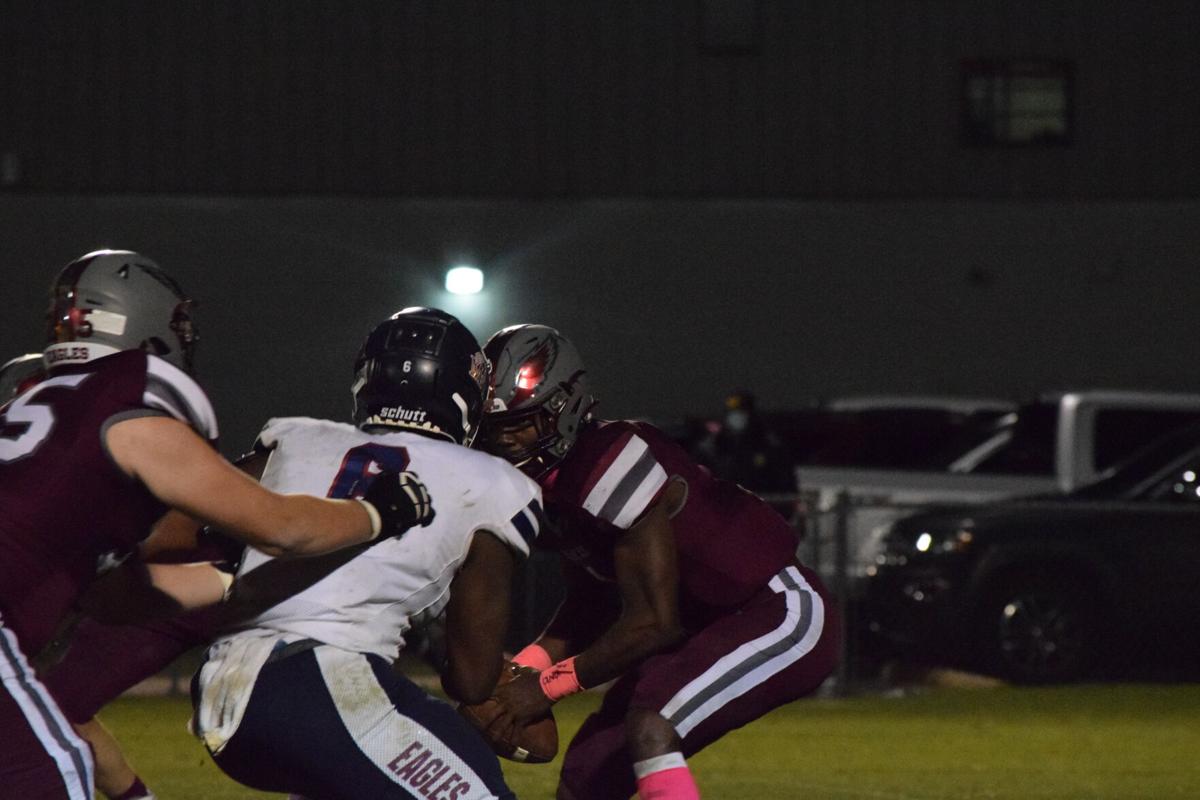 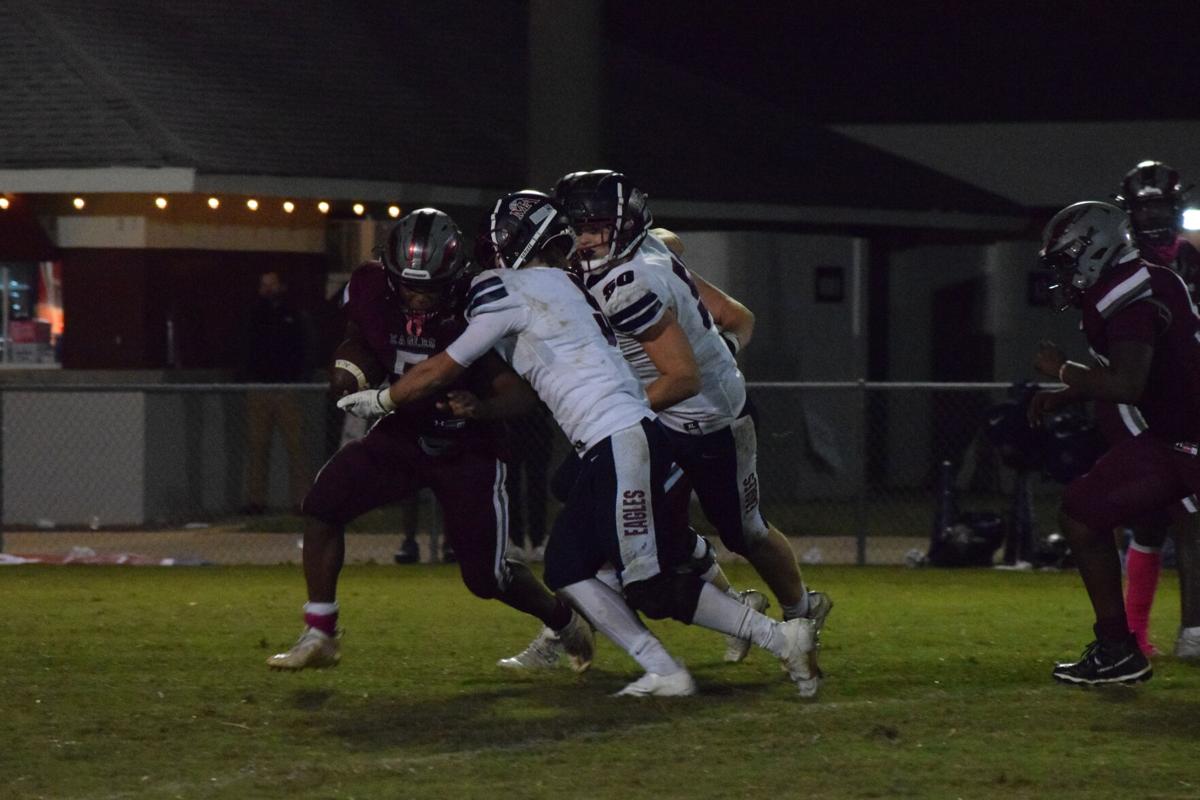 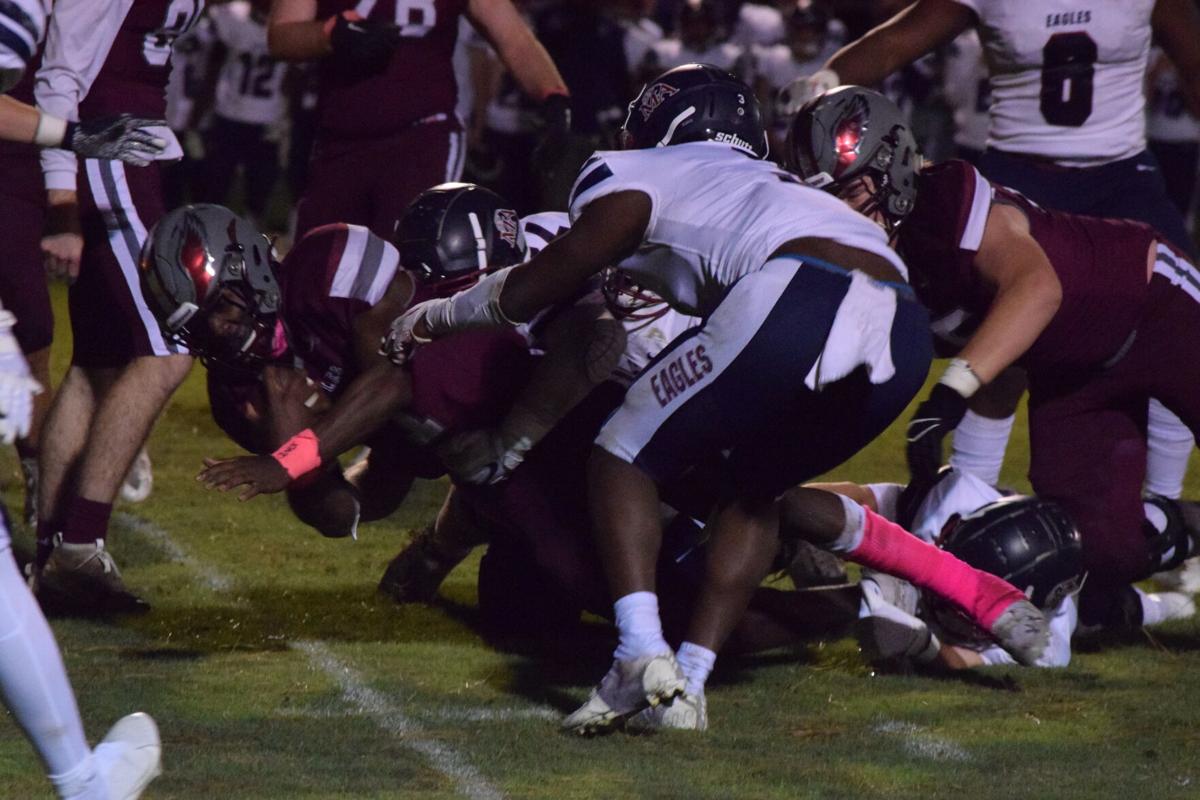 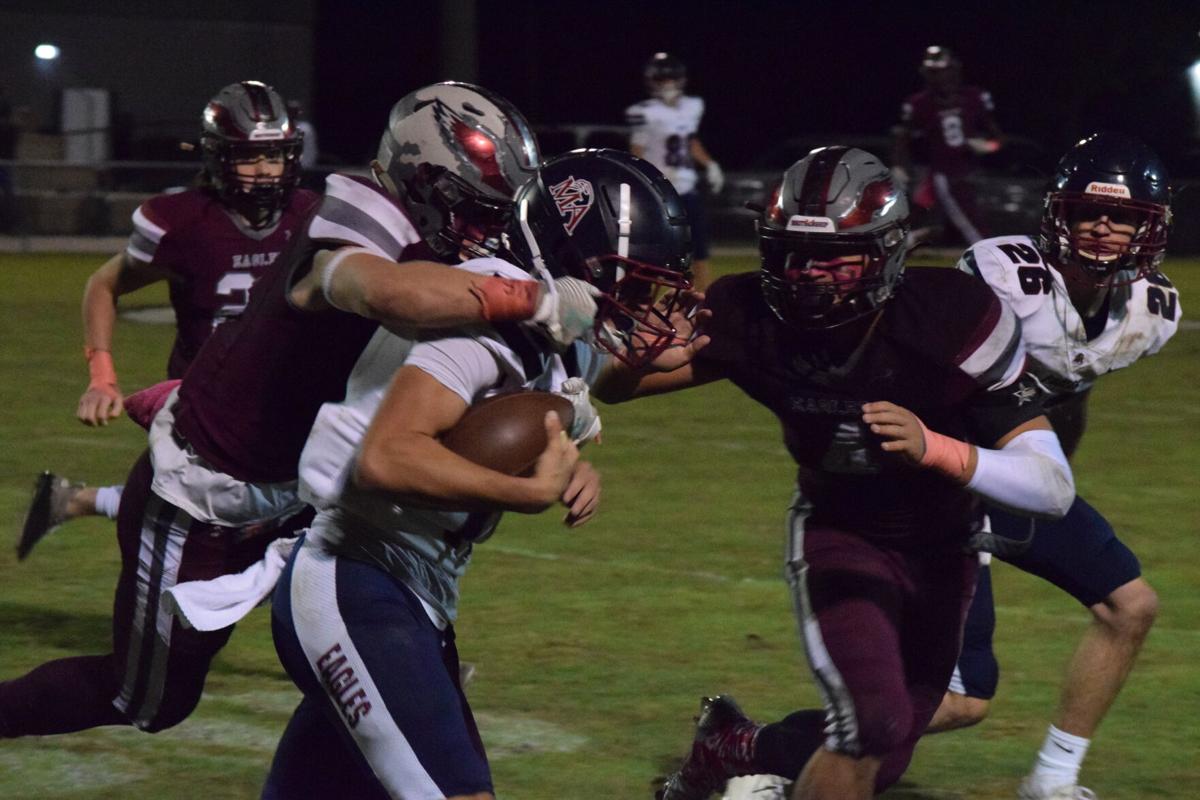 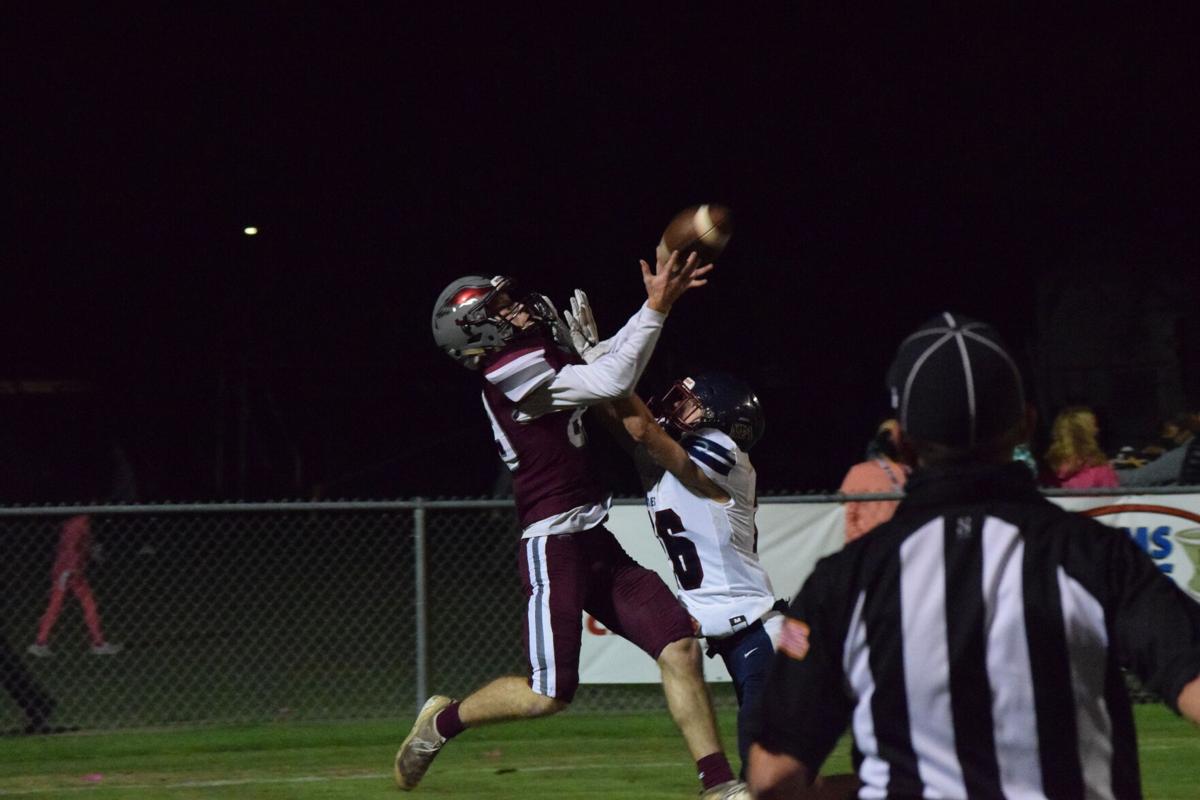 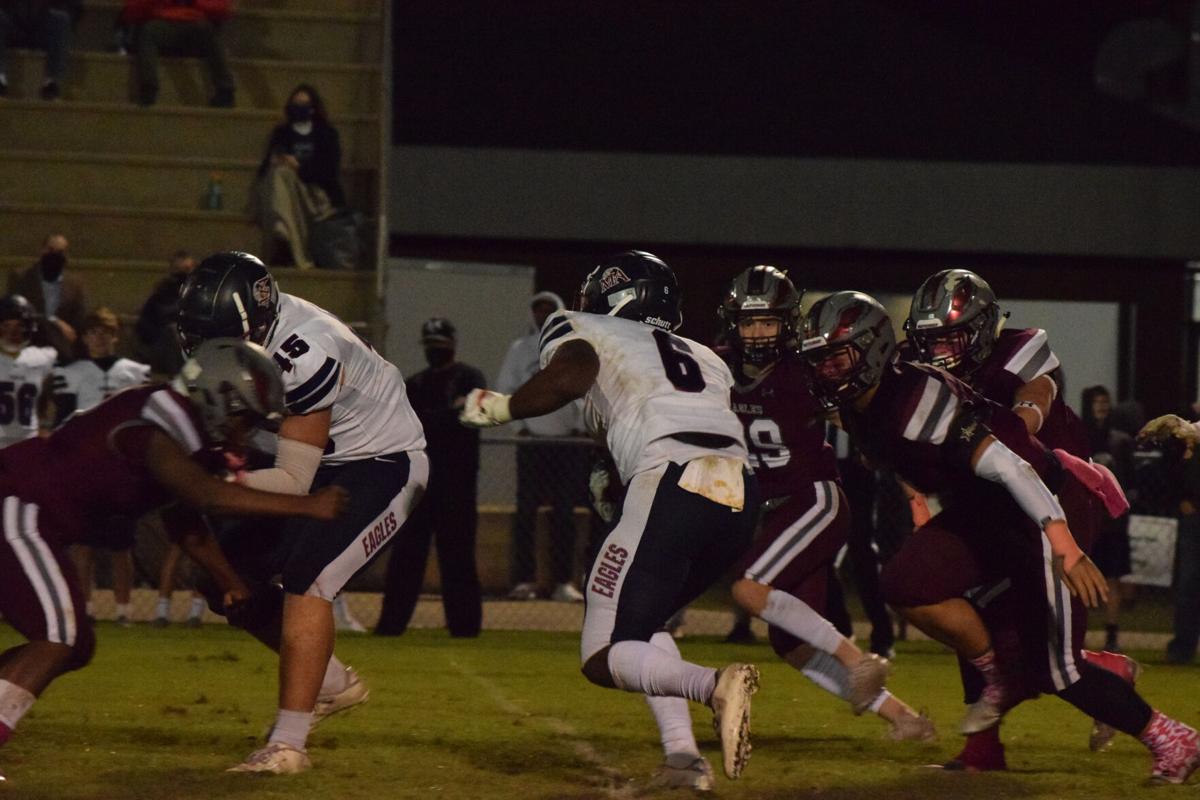 Montgomery Academy fullback Jashawn Cooper cuts back inside behind block of Jackson Kelly on ACA defensive back Corey Landers. 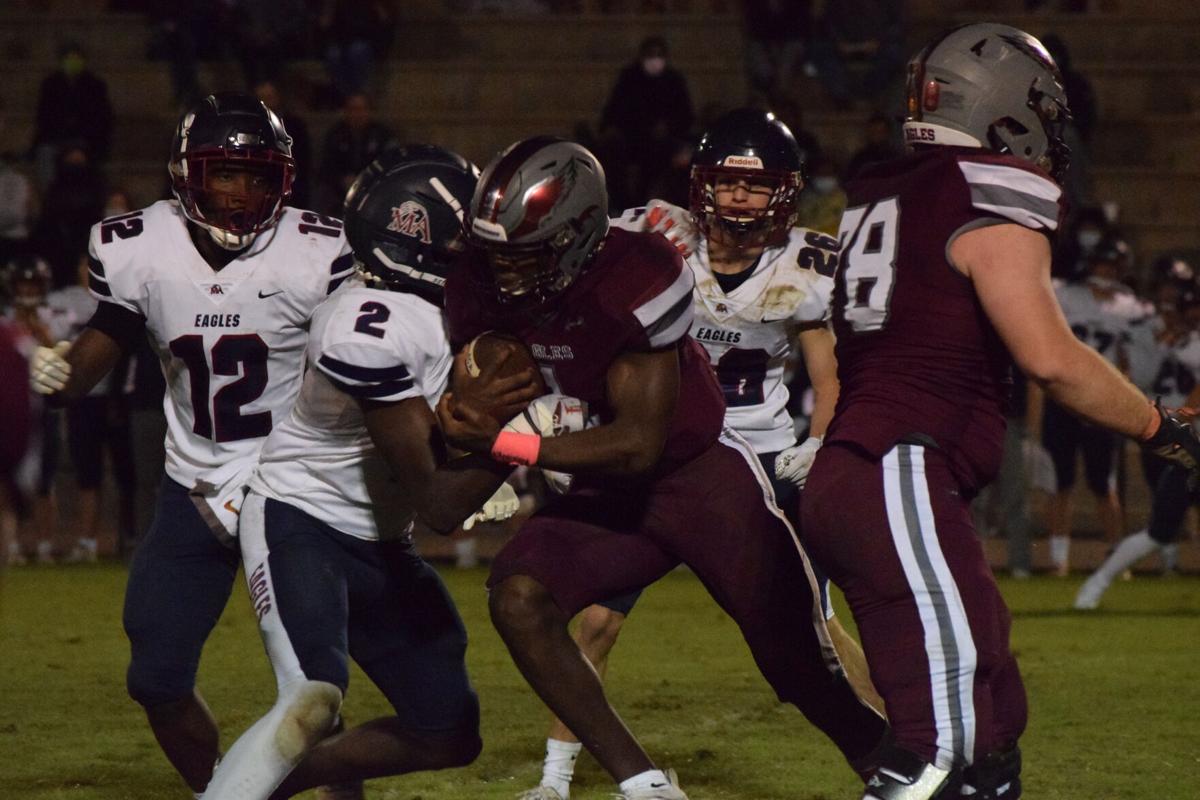 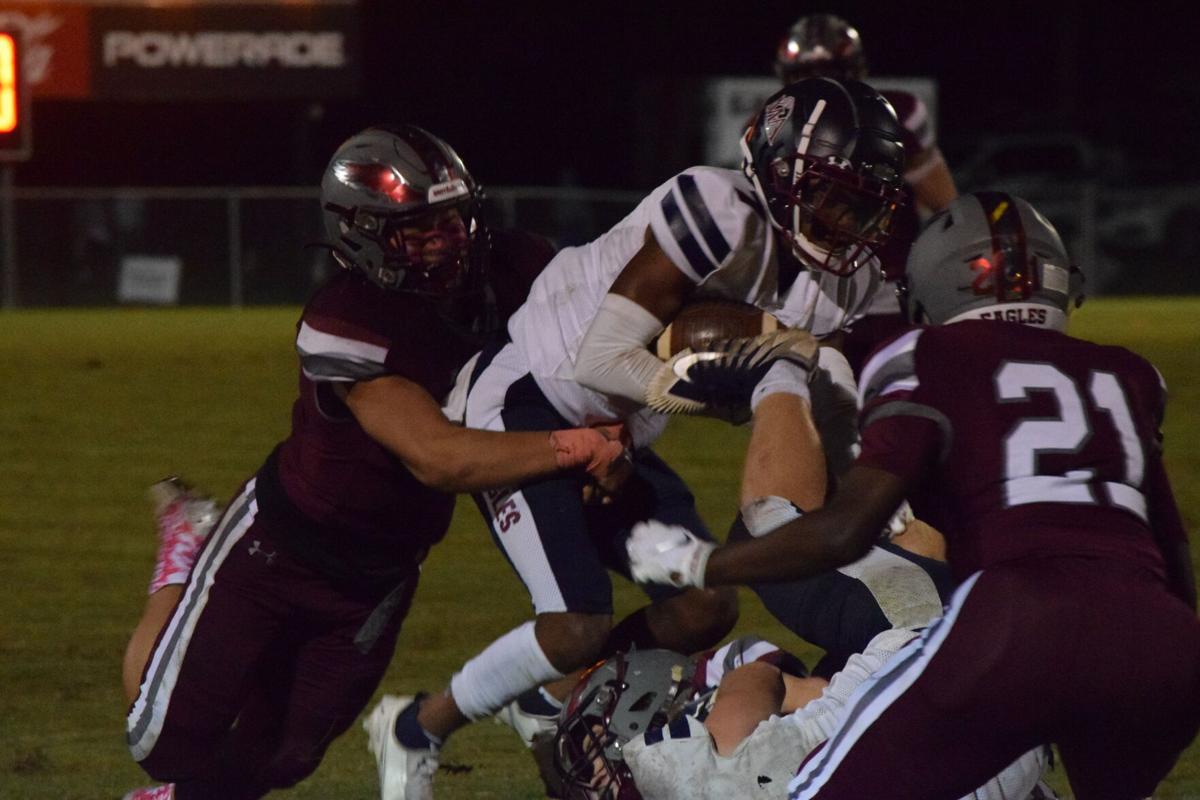 Montgomery Academy running back Kameron Tuck is brought down after a short gain in Thursday's game.

Montgomery Academy fullback Jashawn Cooper cuts back inside behind block of Jackson Kelly on ACA defensive back Corey Landers.

Montgomery Academy running back Kameron Tuck is brought down after a short gain in Thursday's game.

Coaches strive for it, but rarely reach it. But Montgomery Academy was nearly perfect on Thursday night, dismantling a talented Alabama Christian Academy squad 31-7 at Wade Norton Field to finish the regular season 10-0.

Only 10 previous times has a perfect 10-0 regular season ever happened in the Capital City Conference (11 if you count Trinity’s 9-0 record in 2009) and only three previous times at Montgomery Academy – the 1987 state championship team, 2006 and 2014.

Robert Johnson, a member of that 1987 team, became the first coach in the history of the Capital City Conference to accomplish the feat in his first year with the program.

“We’ve got a long way to go,” Johnson said. “We’ll enjoy the 10-0 season. I’m really proud of our kids. They’ve worked their butts off and have really listened and we’ve got great parents, great kids, great administrators. We’ll enjoy 10-0 but come tomorrow afternoon we’ll be back at 0-0.”

“I’m going to be honest, sometimes I didn’t think we were going to go 10-0,” said Montgomery Academy two-way lineman Thomas Kirkham. “All the odds were against us. We had to step up to the plate with what we had. Hats off to the guys, the freshmen, sophomores, juniors and seniors. We came to play every single week.”

The script was similar to one the Eagles have used all season – run behind an oversized line with the help of an oversized back (Jashawn Cooper) and use that line on the defensive side of the ball to control the line of scrimmage. Montgomery Academy averaged 8.8 yards per play against ACA while holding the Eagles to 99 rushing yards.

But while both teams wanted to run the ball, the passing game was the difference. Jalen Clark’s first three passes to three different ACA receivers were dropped, while Britton Kohn’s second pass attempt went to Alex Kohn for 43 yards and a touchdown and his fourth attempt found Carter Wallis for a 70-yard touchdown and a 21-7 lead.

“We dropped seven passes in the first half, including two touchdowns and another in the red zone,” Sanford said. “To my thinking, that’s 21 points. Everyone can play the what-if game but my job now is to make sure the players understand if we do make the routine plays that we’ve been making, it’s a completely different complexion to the game.

“We did not have a great week mentally. We were not sharp in practice and I’m thankful that the game and the week matched up. Next week or whenever it is, if we don’t have a good week of practice, they don’t need to be thinking everything will be fine on Friday.”

ACA, as it has for most of the season, turned to its talented quarterback and for the better part of two quarters Jalen Clark delivered, carrying Eagle defenders on hard-nosed runs, completing passes (those that weren’t dropped) in crucial third-down conversions and even catching a pass from backup Hayes Hunt on a reverse that went 28 yards for a touchdown.

“That might be the best quarterback I’ve ever gone against,” Johnson said. “I’m going to have to really think if I’ve seen one better than Jalen.”

Clark was held to just 63 yards on 14 carries, while completing 10 of 26 passes for 143 yards but getting intercepted twice, once in the red zone.

“He’s pretty fast,” Kirkham said. “Me being over 300 (pounds) and him being a D-I athlete, I don’t try to chase him down, I try to contain him. I knew I wasn’t going to open-field tackle him so I was just trying to get him close to the more athletic guys to get him down.”

The game would turn in the second quarter as ACA, trailing 14-7, marched to a first down at the MA 11 but a holding penalty helped stall the drive. After the Wallis touchdown, ACA drove to the 20, but a fourth-down pass slipped through Garrett Weathers’ hands in the end zone.

“We try to play a pretty sophisticated defense,” Johnson said, “so that gives you the ability to make some good calls down here in the red zone. It shrinks the field and … then you can do some good things. I’m very proud of our red zone defense.”

ACA would start another drive in the third quarter but Ridge Lindsey’s interception of a Clark pass in the end zone turned away another threat.

“That’s the whole deal,” Sanford said. “You look at the scoreboard and it says 31-7 but no one has any idea what that looks like if we had scored 21 points in the first half. It’s a whole different game.”

Montgomery Academy took over at the 20 and marched 80 yards in 10 plays, nine on the ground. Jamal Cooper ran the final six yards to finish off ACA.

“That’s what we’ve been doing to people,” Sanford said, “and we’re not done yet. But we will be done real quick if we have a repeat of the first half of this game.”

Jashawn Cooper finished with 117 yards on 11 carries to lead the MA offense, while Wallis had 10 tackles and Jackson Kelly had seven.

Miller McCarthy led ACA with 10 tackles. Avery Stuart and Corey Landers each had five, while Trey Schlemmer and Otasowie Dion each had four.