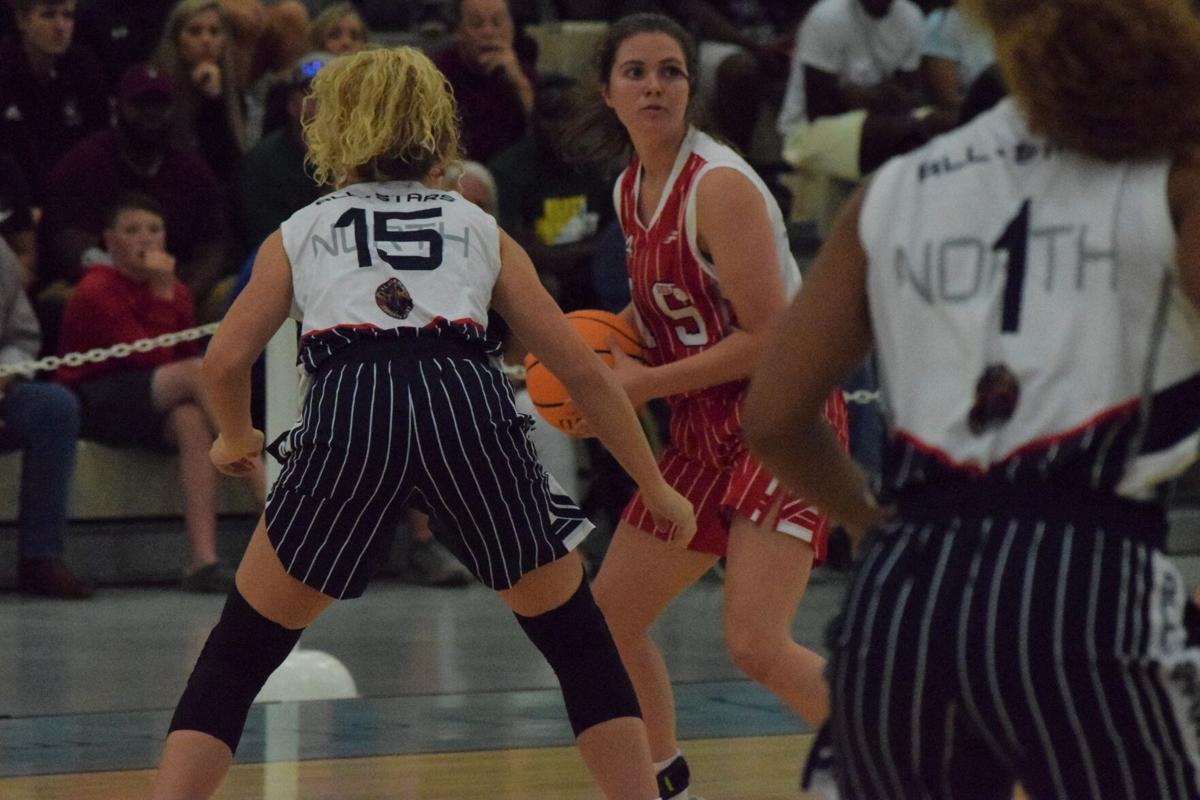 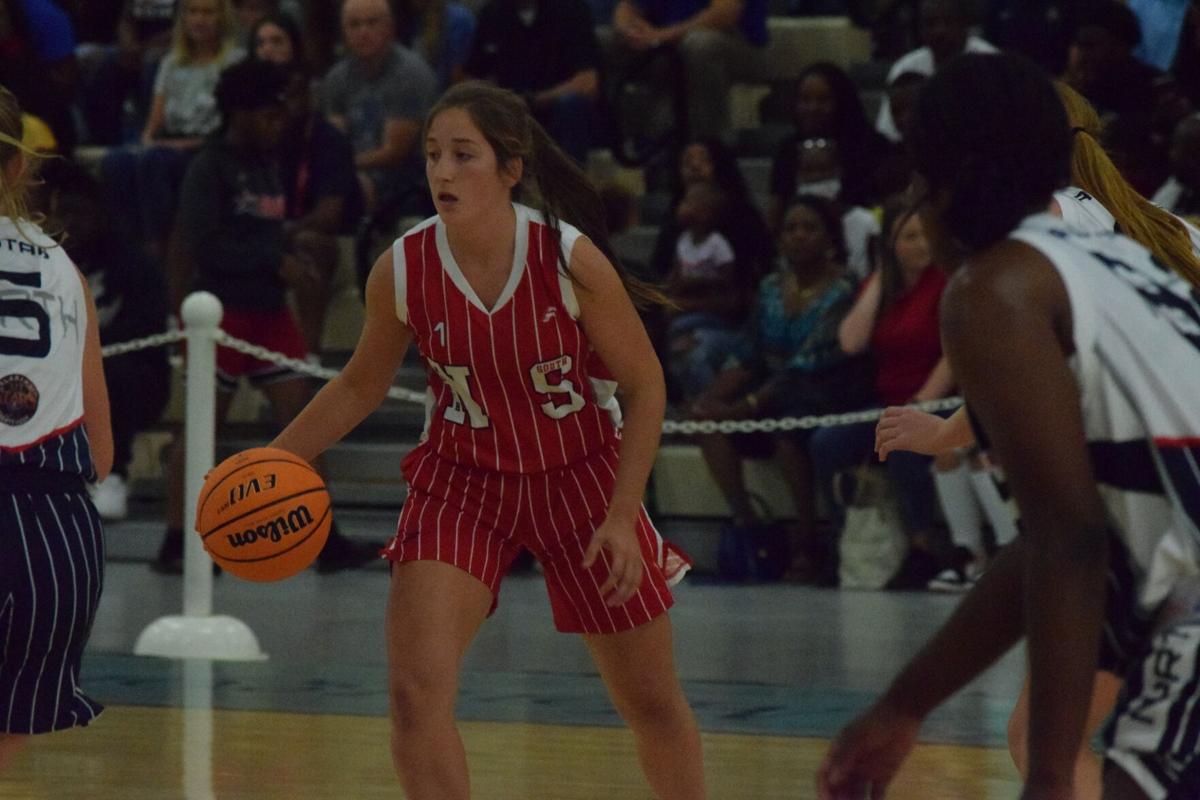 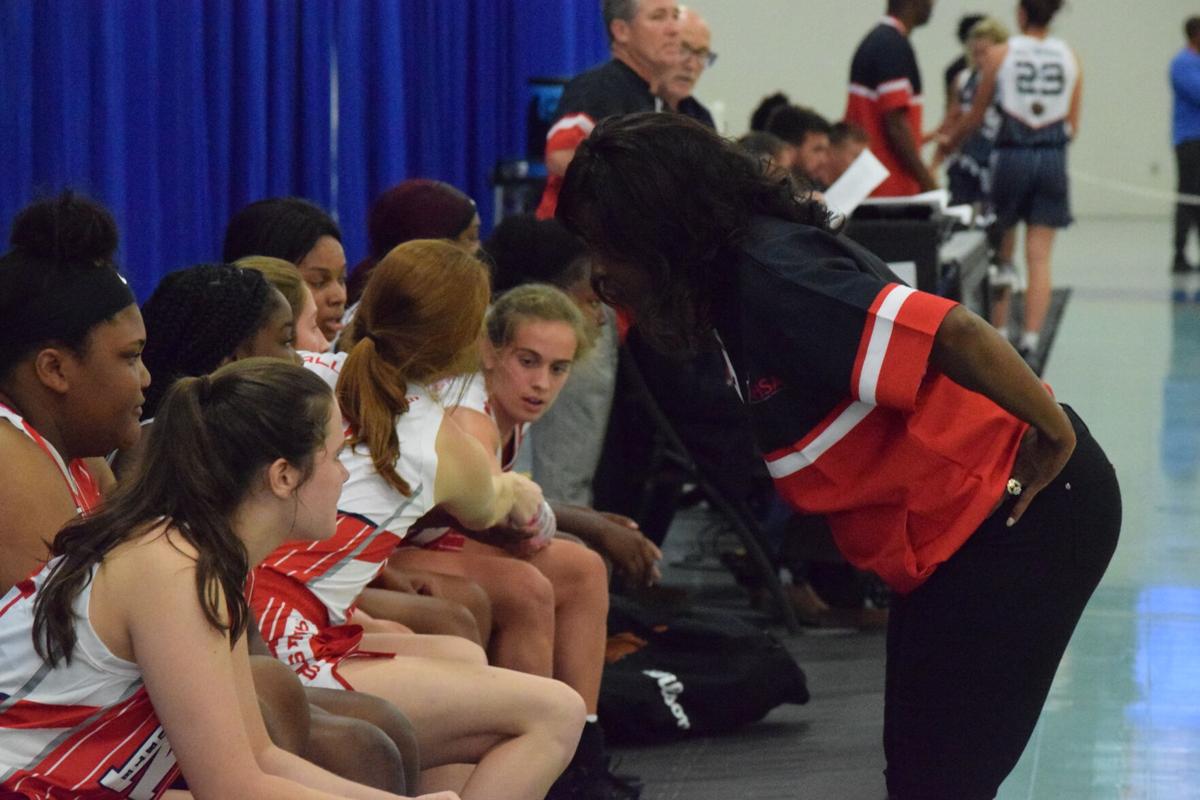 Hall of Fame coach Carolyn Wright talks to her players during the final minutes of Tuesday's game. 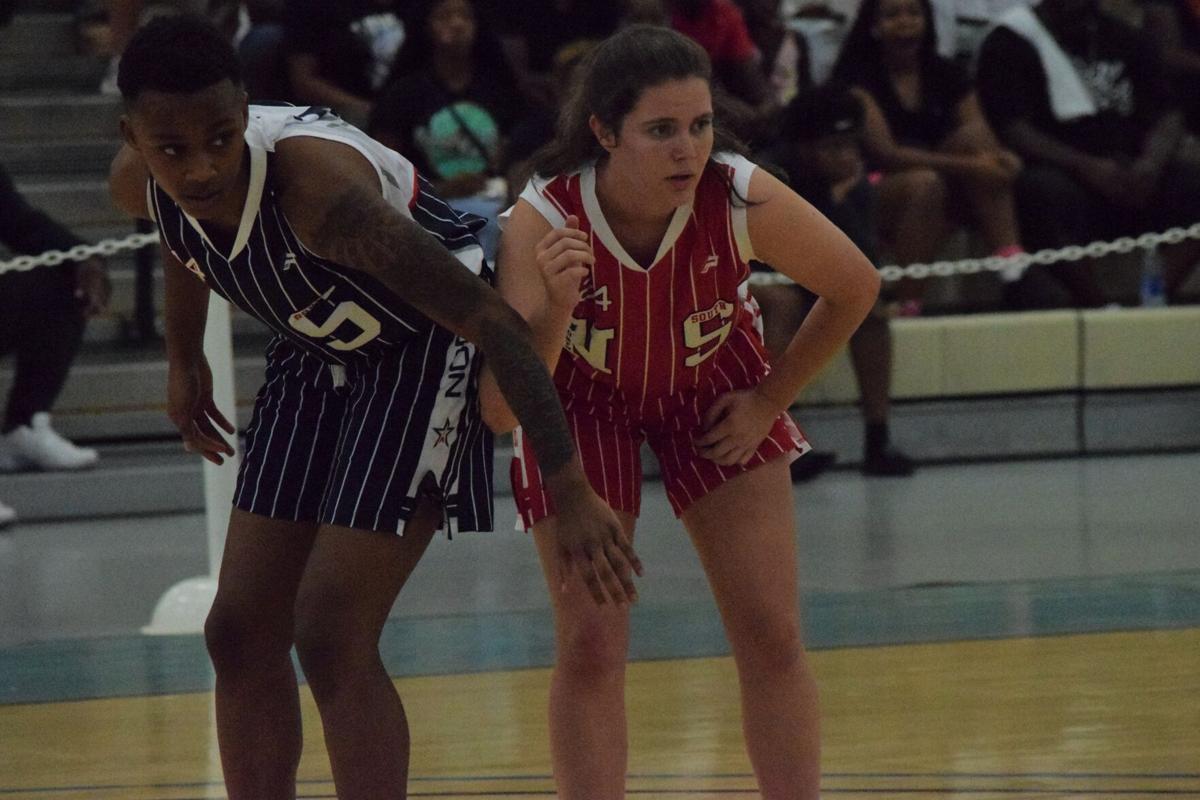 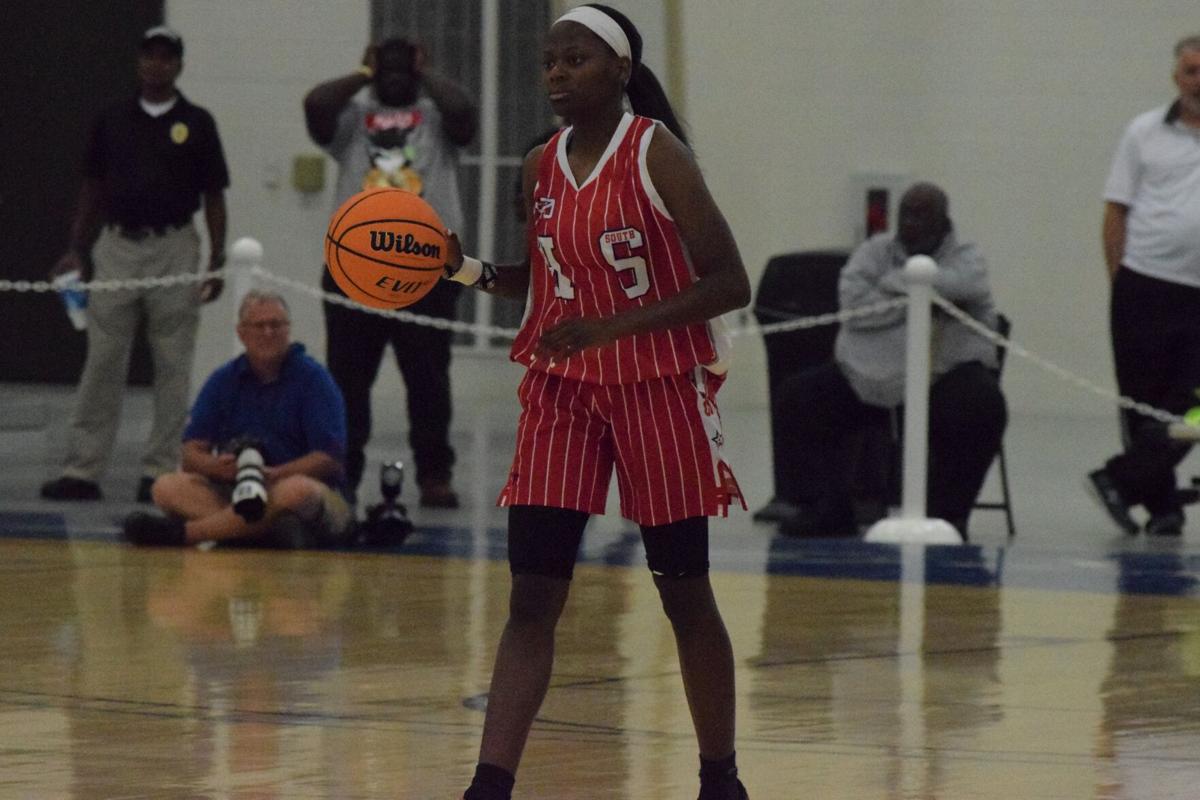 Park Crossing guard Alexis Andrews, who earned most valuable player honors for the South squad, brings the ball up the court in the first half. 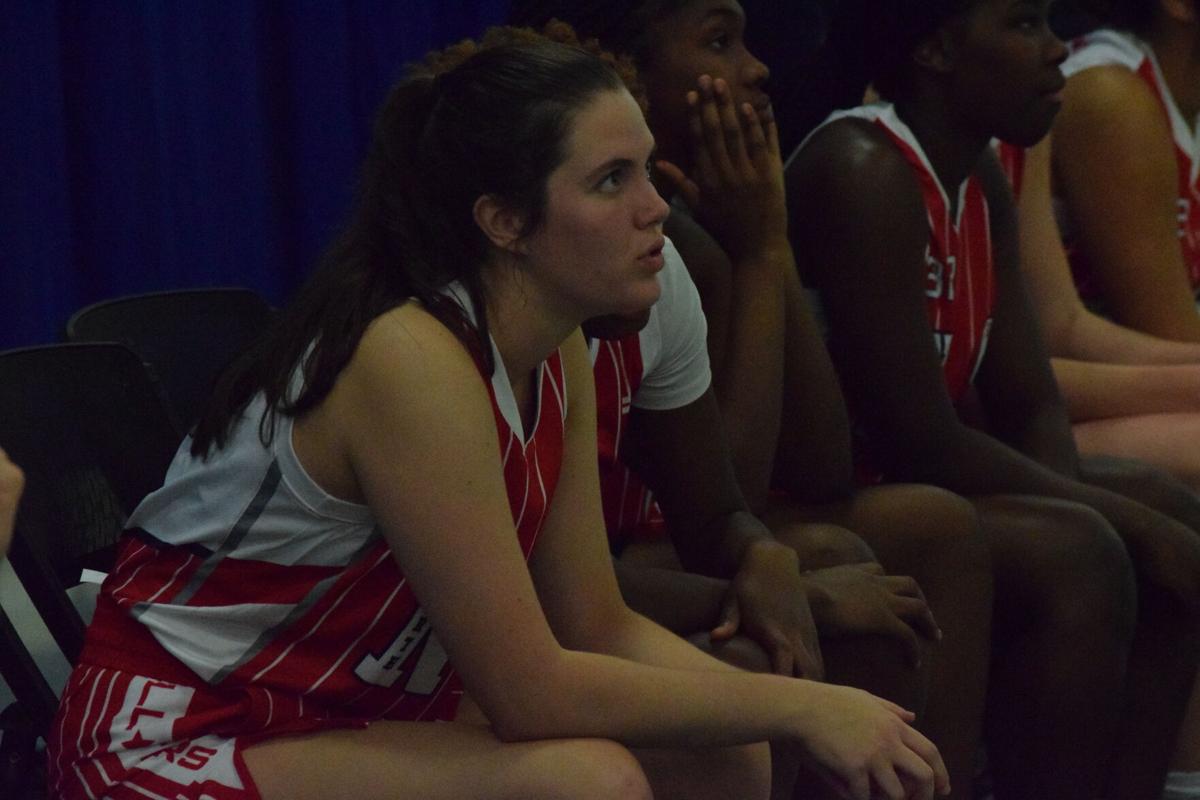 Chloe Johnson spent much of the second half cheering and encouraging her teammates as they tried to rally past the North.

Hall of Fame coach Carolyn Wright talks to her players during the final minutes of Tuesday's game.

Park Crossing guard Alexis Andrews, who earned most valuable player honors for the South squad, brings the ball up the court in the first half.

Chloe Johnson spent much of the second half cheering and encouraging her teammates as they tried to rally past the North.

An all-star game never quite plays out like a regular basketball game in terms of offensive schemes and defensive strategy.

“It’s different from high school ball,” Prattville Christian’s Ella Jane Connell said, “but I’ve been playing travel ball and it kind of had that feel to it. It didn’t surprise me that that was how the game was going to have to be played with as little practice as we were given.”

The North and South all-stars arrived on Tuesday morning, held one quick practice session and then went out on the Multiplex floor and played the Alabama All-Star Sports Week girls basketball game. Not surprisingly, the North won for the 21st time in the 24-game series history, turning back a late charge by the South 66-61 on Tuesday afternoon.

The game was fairly close throughout the contest, although the North got a little more offensive help from MVP Shaniah Nunn of Fairfield, who finished with 20 points and 10 rebounds. In the final 90 seconds, the North all-stars passed the ball around the floor to maintain their lead and several 3-point attempts by South shooters in the final seconds were off the mark.

Two of the better 3-point shooters on the team, Connell and Montgomery Academy’s Chloe Johnson, spent the last minutes of the game on the bench, cheering their teammates.

“It’s just awkward for me because I’m always in the game when it’s on the line like that,” Johnson said. “But I trust my teammates. It’s all right.”

Johnson started the game but rarely handled the ball. She was on the receiving end of two passes and tested the North defense before passing to a teammate. She scored an early basket under the goal with an assist from Olivia Porter for her only points of the game.

“There’s always ‘what ifs’ and what I should have done,” Johnson said. “As an athlete, that’s how it is. I wish I would have done some more stuff.”

Connell spent the entire first half on the bench, relegated to watching as her team trailed just 24-22 at the break. She elicited one of the loudest cheers from the crowd -- which included a large PCA contingent -- when she pulled up and drained a 3-pointer midway through the third quarter.

Moments later, she was off the mark on a 15-foot shot and never took another shot the remainder of the game.

“I feel good about the game,” Connell said. “I do think that I could always be a little more aggressive but for the most part I tried to make the right plays and shoot when I was open.”

Park Crossing guard Alexis Andrews was chosen as the South’s most valuable player after scoring a team-high 12 points.

Both Johnson and Connell were a little disappointed that all-star sports “week” was reduced to one day, giving the all-stars little time to practice or get to know each other.

“There’s so many kids that don’t really know each other and are playing together from different classifications,” Johnson said. “So coming together in one day is really hard, but I think as a team we had fun today and bonded a little.”

“It was really fun,” Connell said. “I know that usually they have more time to spend with the team but I think because of COVID we weren’t given as much time this year. I would have liked more time with my teammates, to get around good players and practice with them a little more.”

One positive to come out of the game was an opportunity for both players to work with Central-Phenix City coach Carolyn Wright. The South all-star coach was inducted into the high school hall of fame in 2019.

“It was awesome,” Connell said. “She’s a great coach. She encouraged us the entire time and with the small amount of practice that we had, she made sure the energy was up and just encouraged everyone to give it their all because this is an opportunity that not many people get to do.”