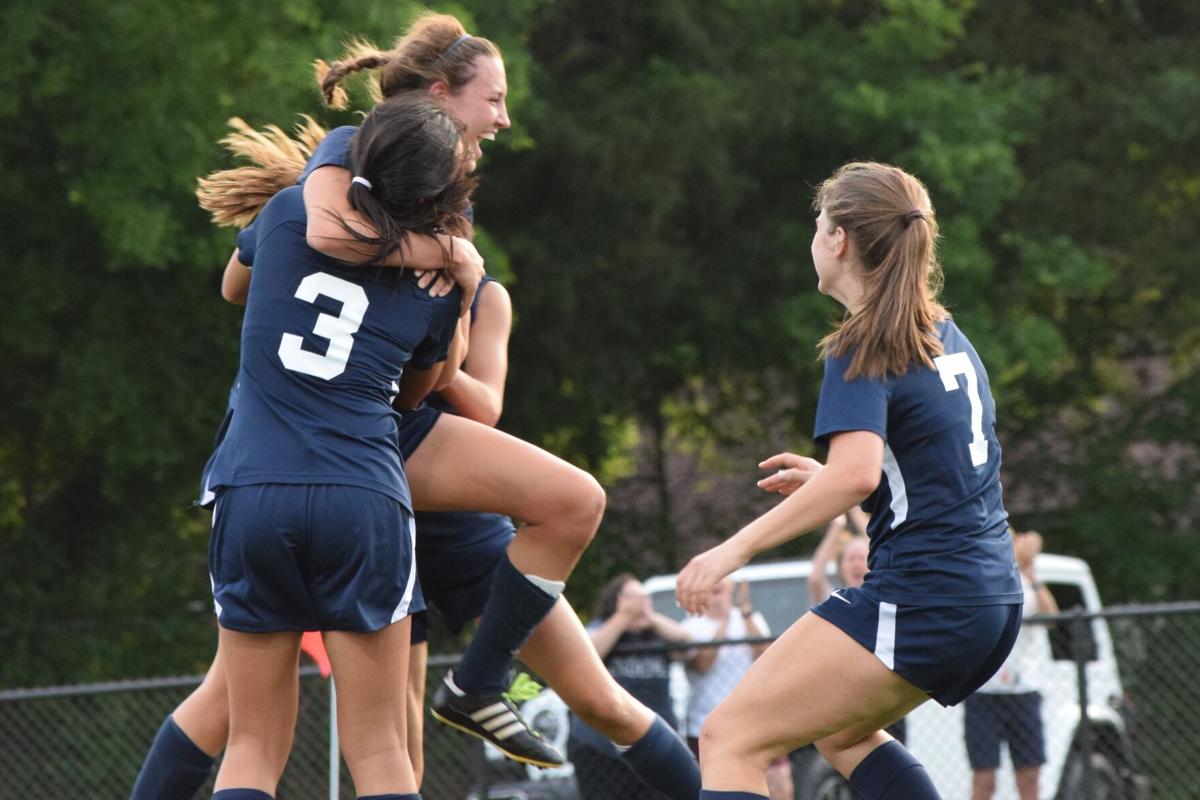 Montgomery Academy's Leighton Robertson leaps into the arms of Sophia Cho (3) and Hayes Jenkins as Katherine Sinco (7) joins the celebration following Robertson's goal with 3.3 seconds left in the first half. 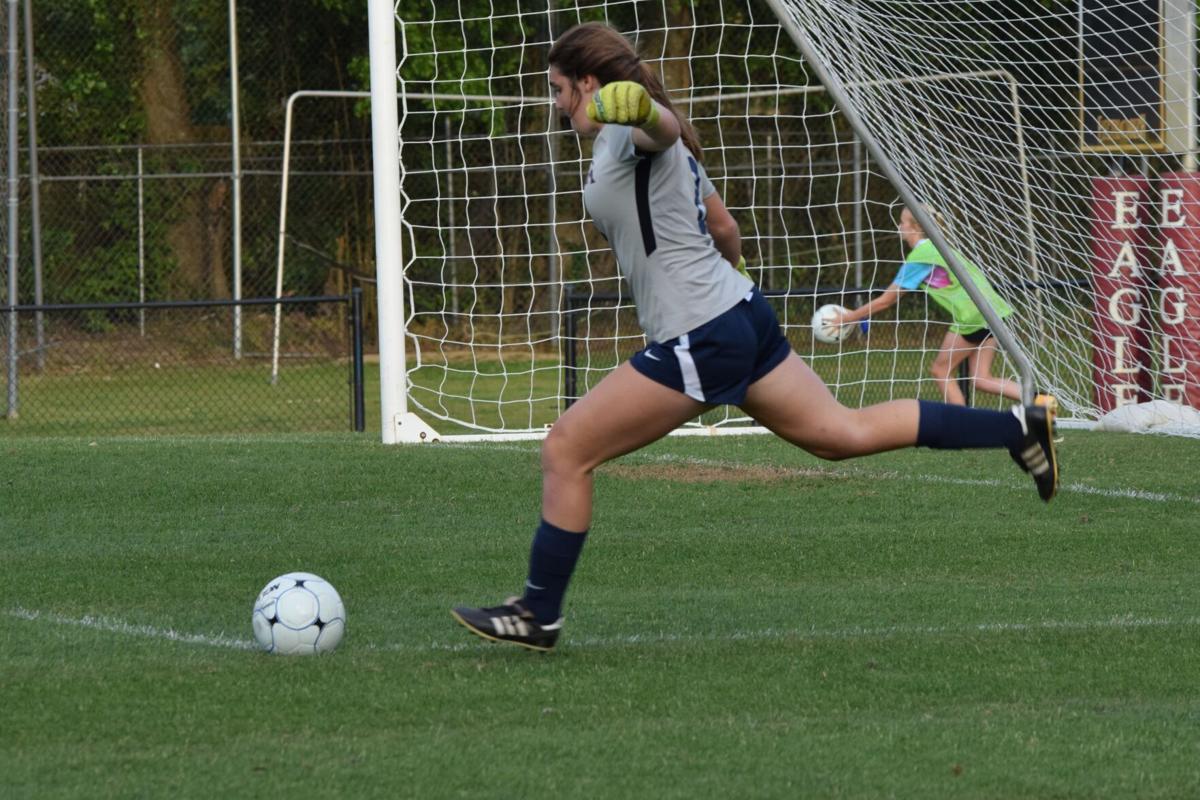 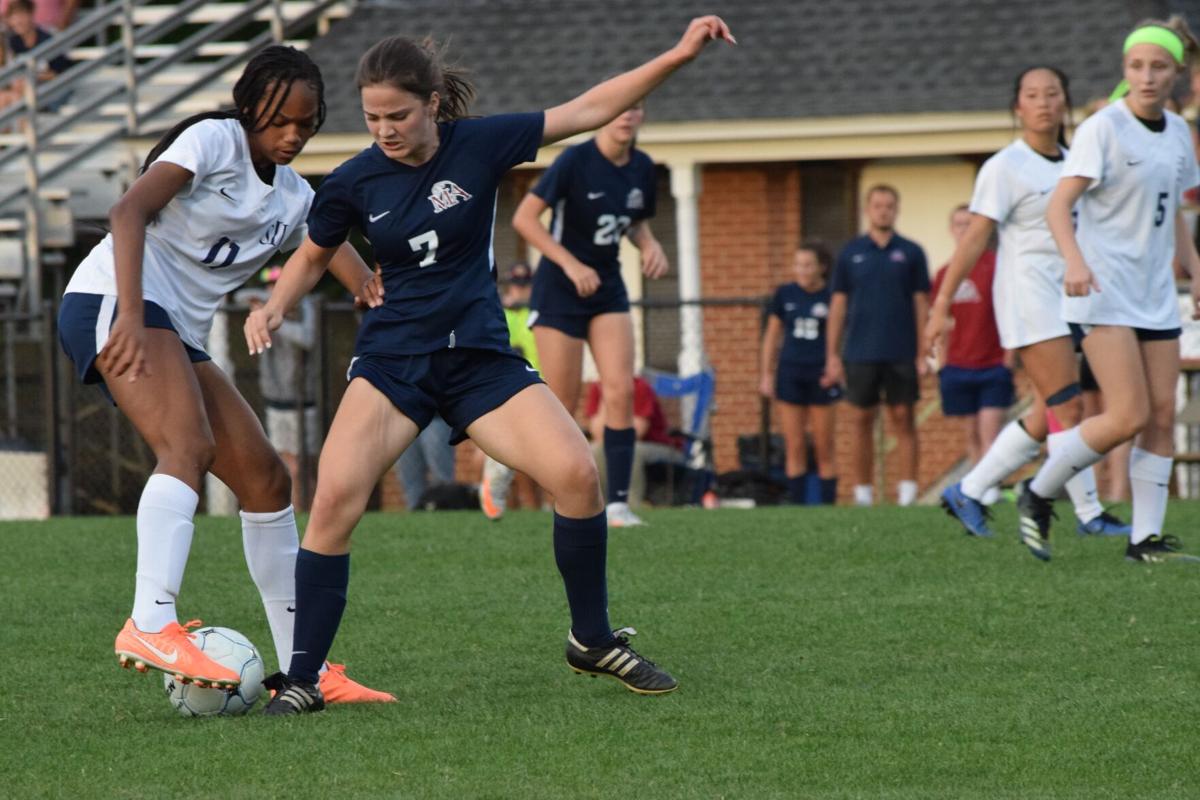 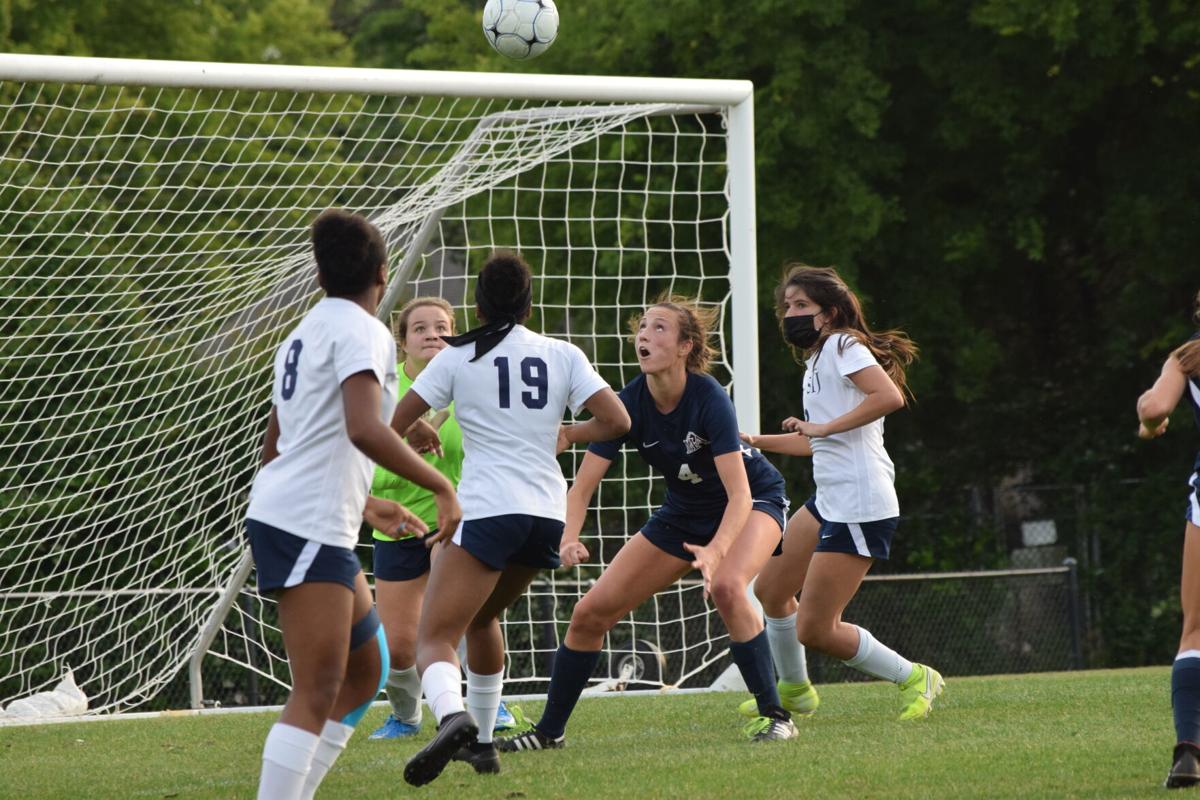 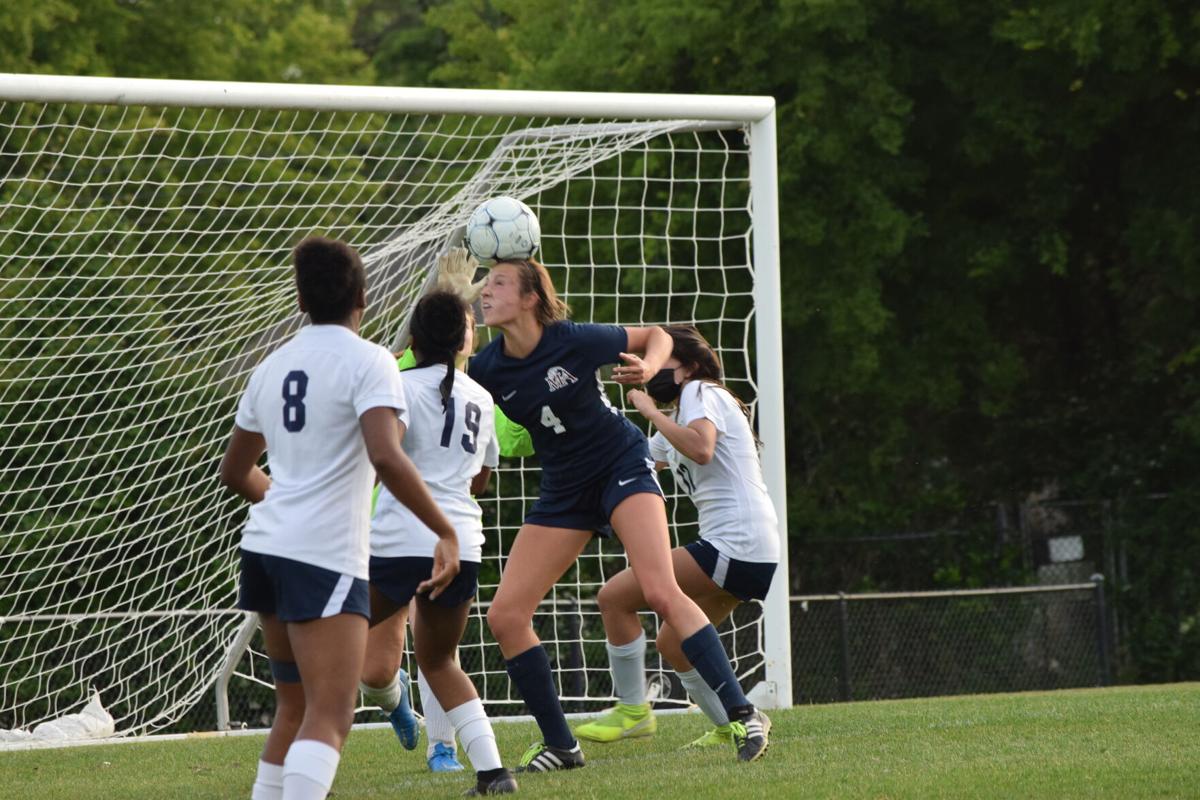 Leighton Robertson's header with 3.3 seconds remaining in the first half gave Montgomery Academy a 2-0 lead over the Trojans in the 4A-5A quarterfinal matchup. 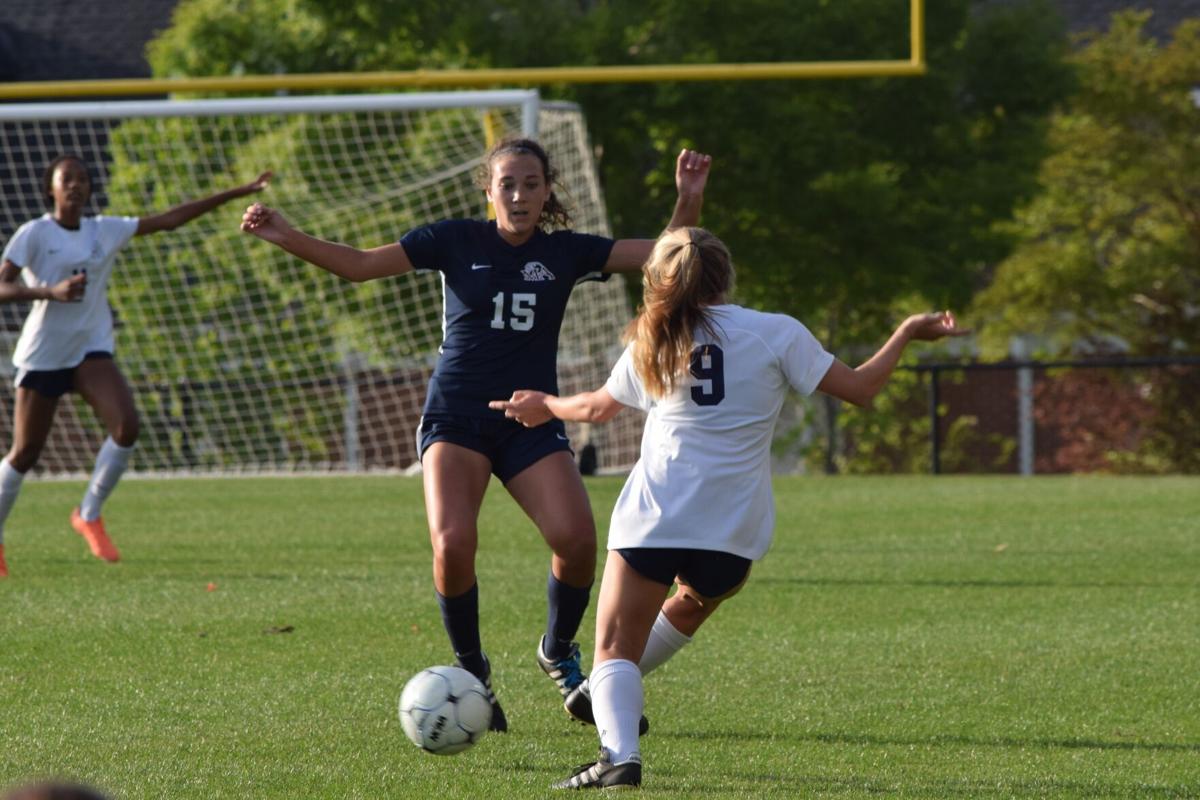 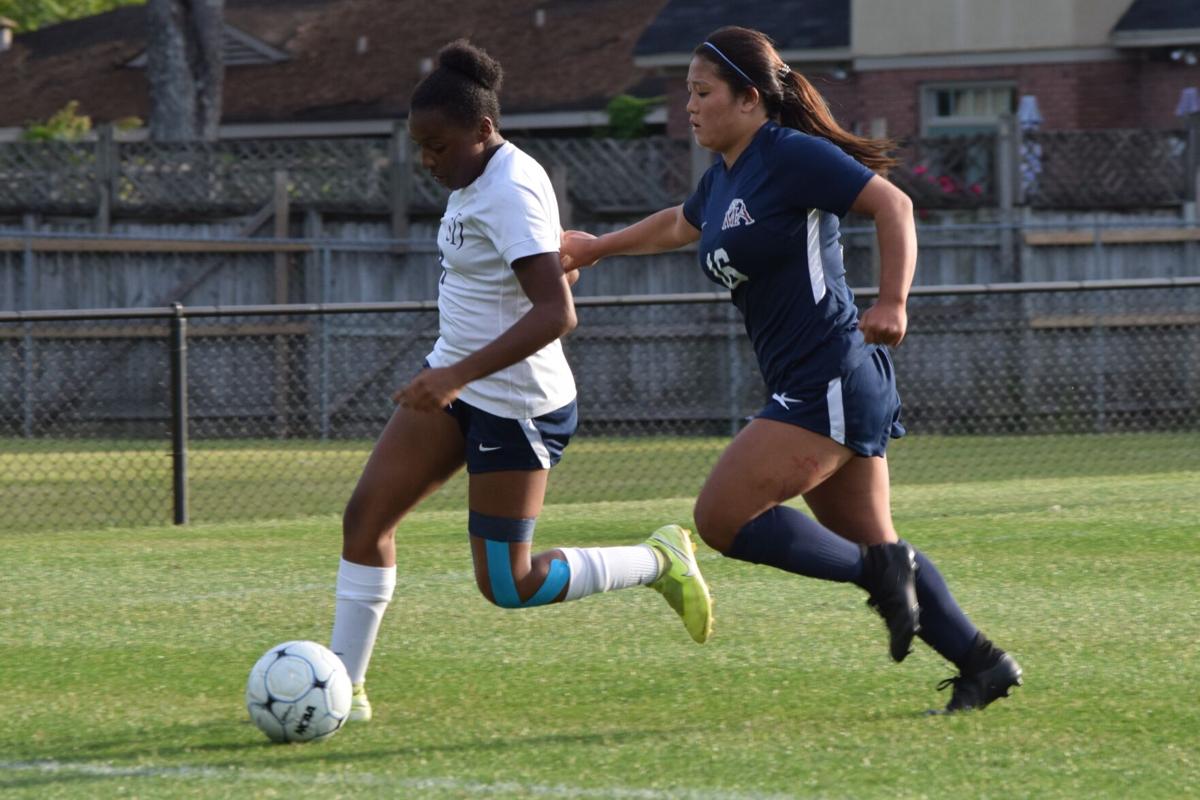 Montgomery Academy's Leighton Robertson leaps into the arms of Sophia Cho (3) and Hayes Jenkins as Katherine Sinco (7) joins the celebration following Robertson's goal with 3.3 seconds left in the first half.

Leighton Robertson's header with 3.3 seconds remaining in the first half gave Montgomery Academy a 2-0 lead over the Trojans in the 4A-5A quarterfinal matchup.

In a game where scoring was at a premium, Leighton Robertson’s goal with 3.3 seconds remaining in the first half was too much for St. James.

The Montgomery Academy senior took a pass from Virginia Meacham and headed in a goal just ahead of the halftime horn for the Eagles’ second goal and the defense took over from there in a 3-0 victory over the Trojans at McLemore Field on Friday night.

“I think it was really good by Virginia Meacham to get that thrown in nice and quick as the clock was rolling down and we know what Leighton is good at,” Montgomery Academy coach Joe White said. “She attacks the ball. She got a piece of the ball and put it in with three seconds on the clock and I think that was vital in this game.”

“I really feel like that was going to be your state finals,” St. James coach Charlie Brightwell said. “Two really good groups, two groups that played hard, hard, hard, played with their guts tonight, but we came up a couple of bounces short. But I couldn’t be more proud of the girls.”

Montgomery Academy (18-0-1) advances to the 4A-5A state tournament in Huntsville and will face John Carroll (10-9-1) in a semifinal meeting on Thursday at the Huntsville Soccer Complex. St. James (13-5) lost for the third time this year to Montgomery Academy, losing 2-1 on April 1 and 3-0 on April 13.

“Playing against a team three times is never easy, it doesn’t matter who you play,” White said. “You’ve beaten them the first two times, the third time is always tougher and we saw that in the first half. It was a very cagey game, chaotic, but we scored two goals because of the quality of our players.

“All year our back four, our midfielders, do their job defensively. We pride ourselves in making sure we keep a shutout. We’ve only conceded six goals all year, we haven’t conceded any since we played St. James the first time.”

The Eagles broke a scoreless tie 20 minutes into the contest when Robertson headed on for Hayes Jenkins. Five minutes into the second half, the Eagles added the game’s final goal when Meacham’s free kick was blocked by goal keeper Kaelyn Morgan but Jenkins followed with a kick for her second goal of the game.

“We tried to reinvent ourselves a little after the last loss,” Brightwell said, “because we sat back and were too passive so we tried to be a little more take charge, put the ball down and connect because we’re not an overly big, tall, physical group and they’ve got more height than we do so we knew we needed to take some of the physicality out of the game.”

With five minutes remaining in the first half, the Trojans mounted several consecutive shots on goal but Norah Desautels was up to the task of preserving the shutout, setting up Robertson’s momentum-changing shot minutes later.

“We started to find a little rhythm,” Brightwell said. “We never found a great rhythm but we started to find some rhythm. The mistakes cost us early. But the girls came back, never dropped their heads and battled the whole second half.”

Montgomery Academy, defending 4A-5A champ the last time a state tournament was played in 2019, will return to Huntsville in search of its ninth trip to the finals in the last 10 tournaments. St. James, meanwhile, will go back to work in hopes of breaking through in 2022 with a squad that loses only senior Caroline Williams.

“We’re going to miss her greatly,” Brightwell said. “A tremendous kid who comes in and works hard, brings a great attitude, is a good leader for our younger kids to see a great example. But we’re young. The majority of our team is ninth graders and eighth graders.”