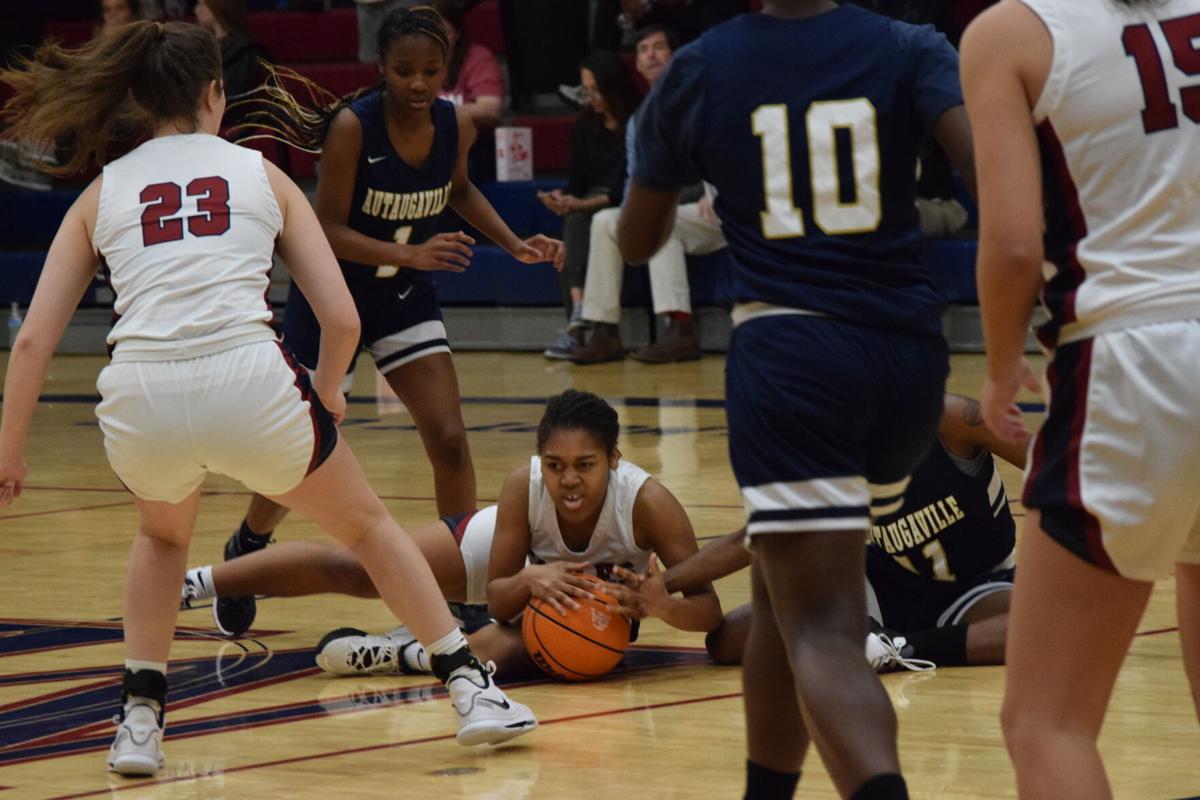 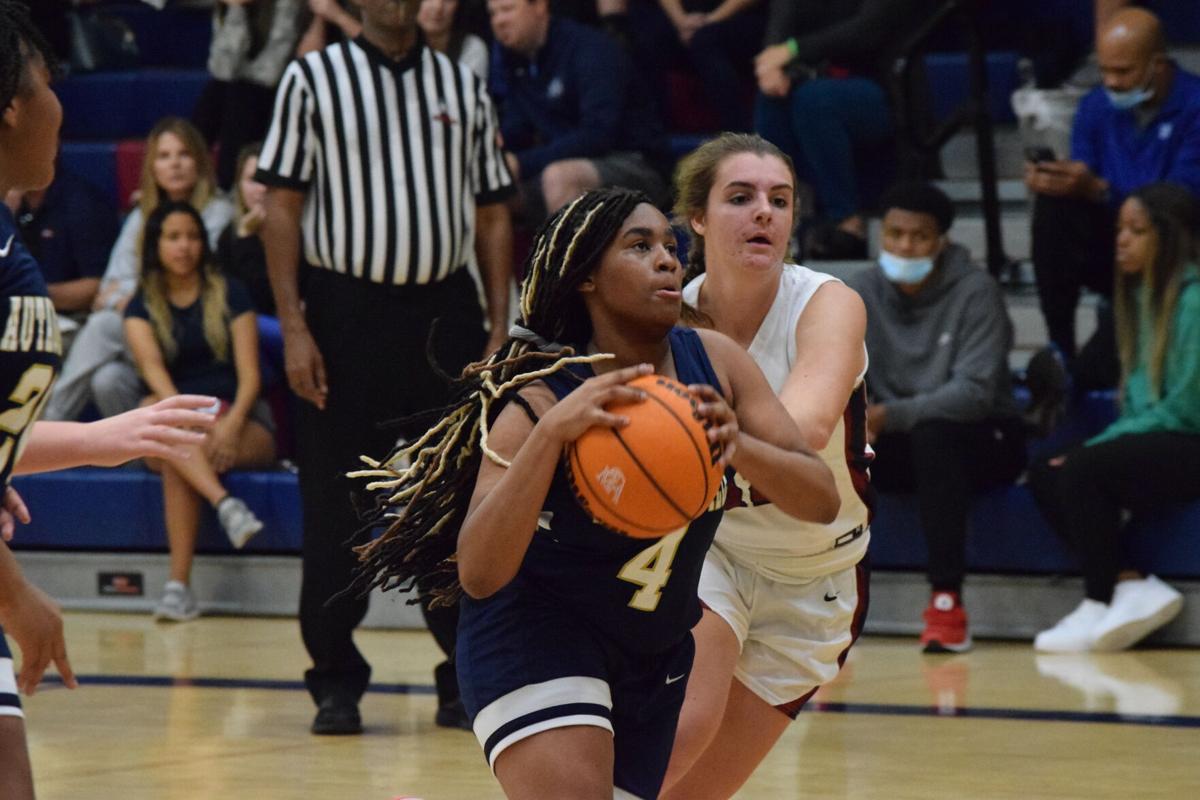 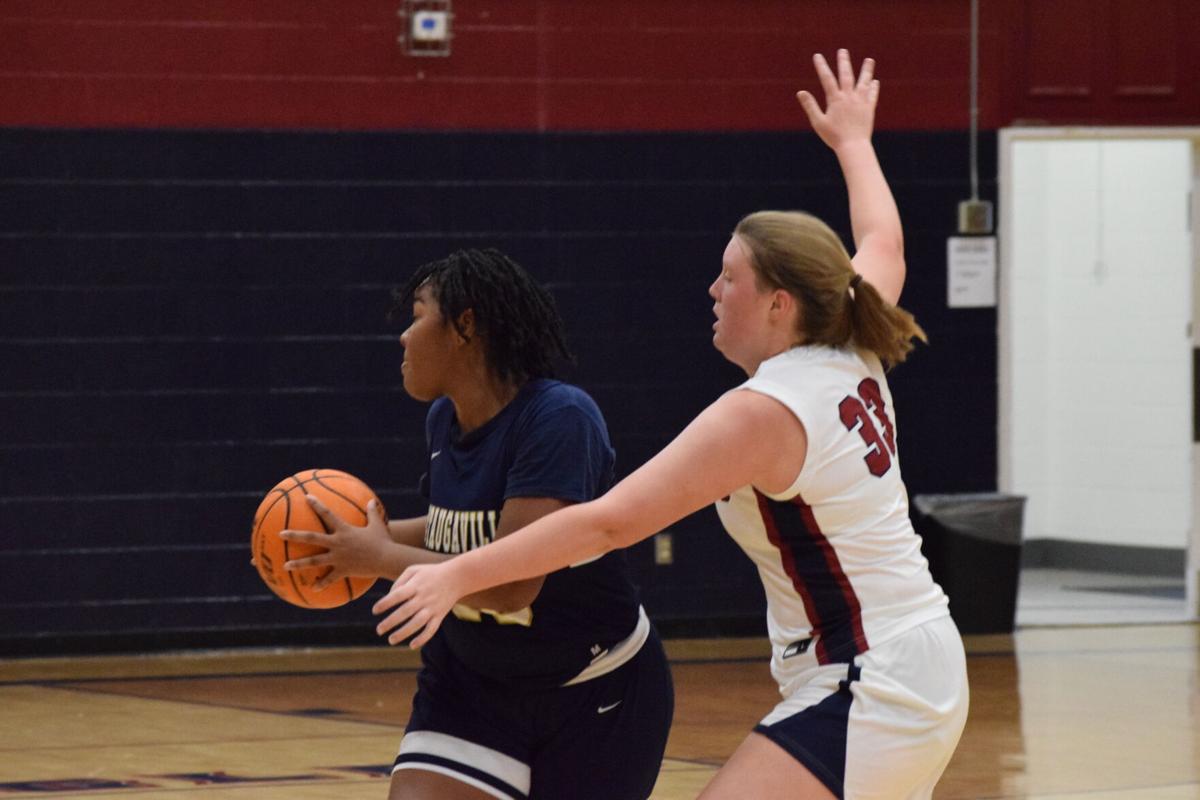 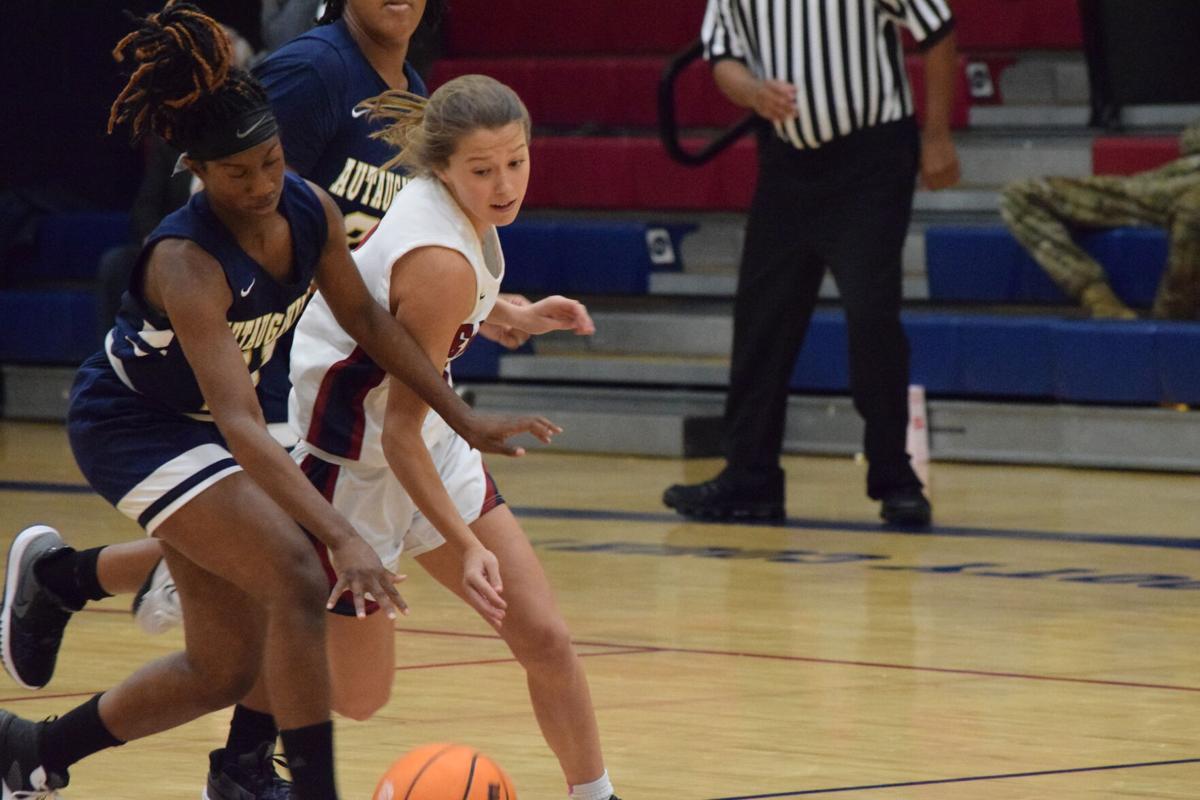 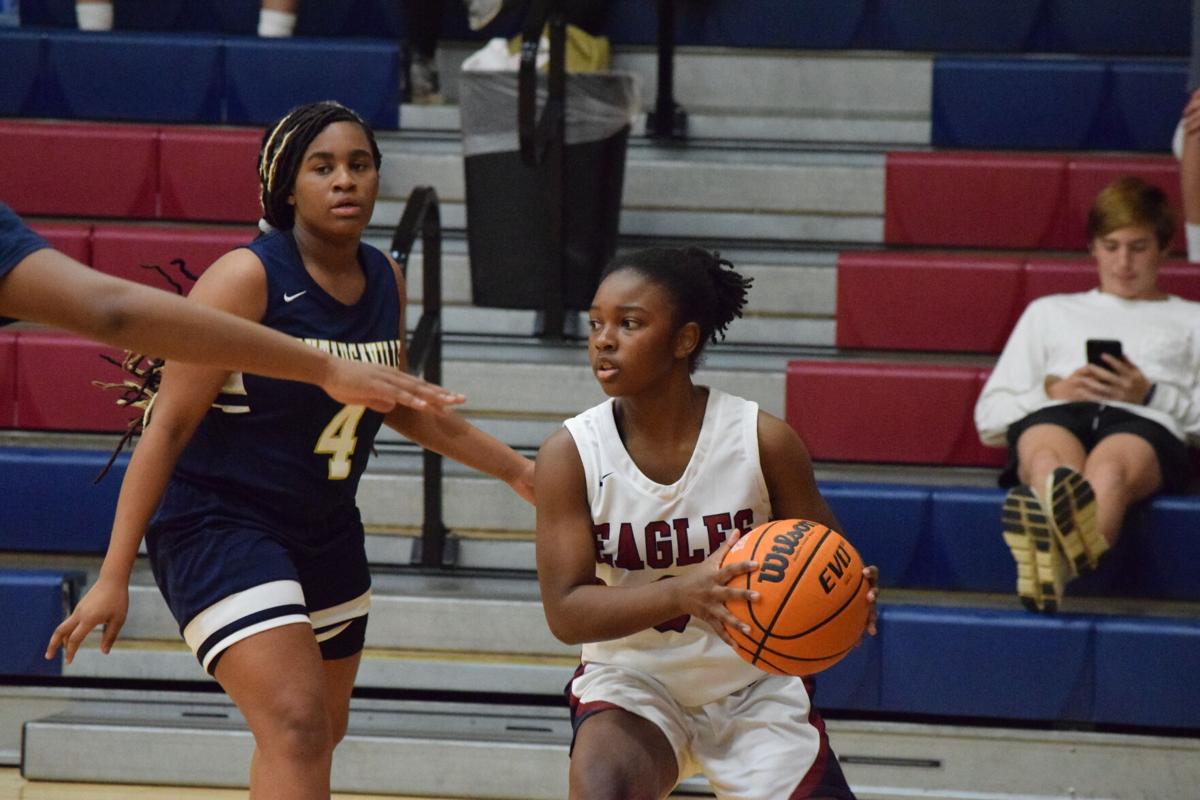 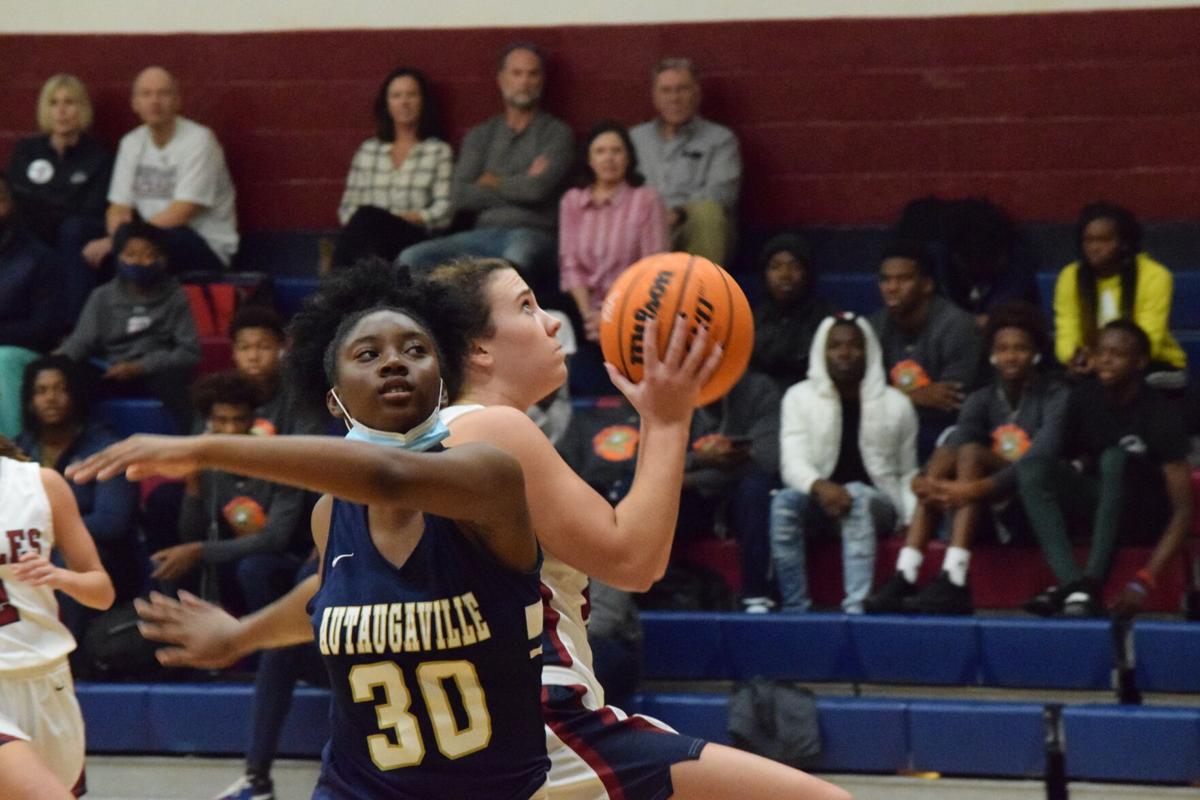 Montgomery Academy's Virginia Meacham scores on a layup as Autaugaville's Alexzasia Sanders misses on a swipe at the ball. 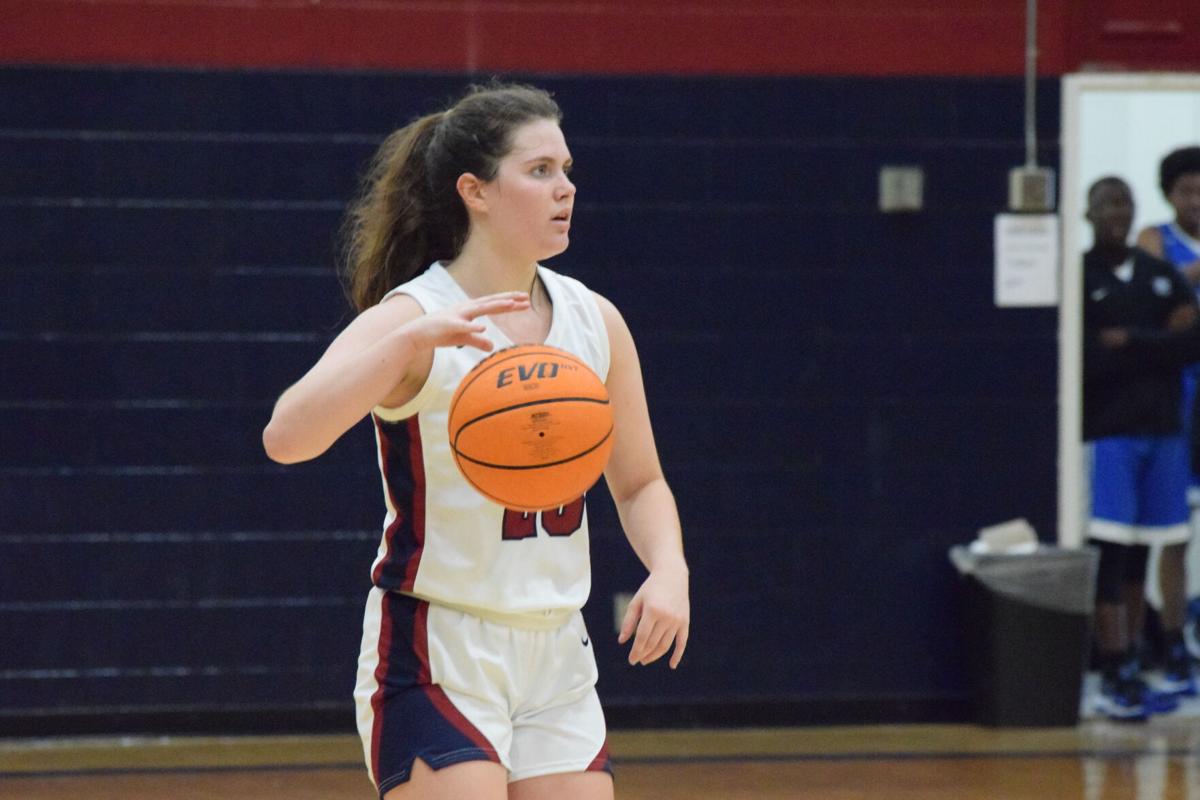 Chloe Johnson brings the ball up the court. 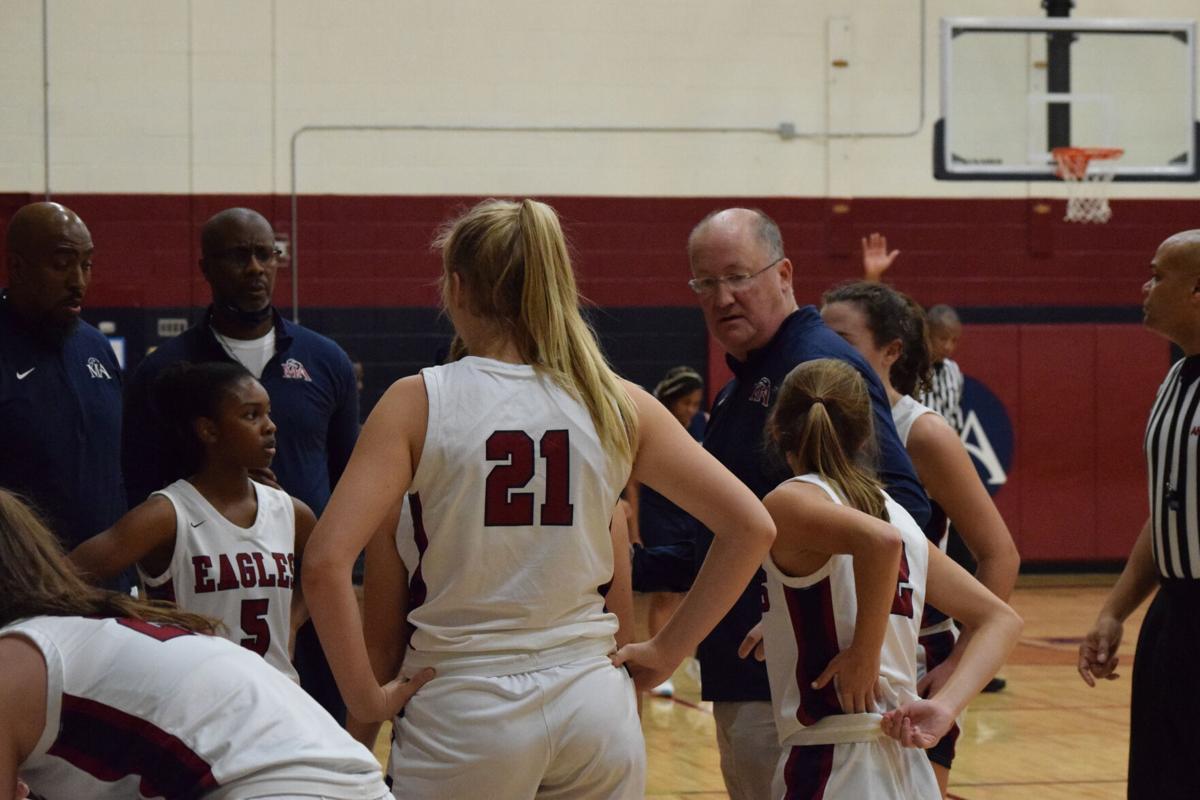 Montgomery Academy coach Reg Mantooth talks to his team during a timeout.

Montgomery Academy's Virginia Meacham scores on a layup as Autaugaville's Alexzasia Sanders misses on a swipe at the ball.

Chloe Johnson brings the ball up the court.

Montgomery Academy coach Reg Mantooth talks to his team during a timeout.

Last year, there was a lot of buzz around the Montgomery Academy girls’ basketball team as they opened the season in the Coach Larry Chapman Foundation Tip Off Classic with a senior-laden squad, new coach Reg Mantooth and transfer Chloe Johnson, the reigning Alabama Independent School Association player of the year.

This year, Mantooth and Johnson are almost the only pieces returning as a new group of players were elevated to the MA varsity this year.

The inexperience showed as the Eagles struggled mightily from the floor before scoring 18 unanswered points in a stretch late in the second quarter and through much of the third on the way to a not-so-convincing 46-19 win over the overmatched Eagles in the opening round of the tournament on Monday at Joe Mooty Court.

“Last year, we had the six seniors and all of them contributed really well,” Johnson said. “This year, it’s a little different. We have some younger girls coming up who have to contribute in a big way. Today, it might not have gone the way we planned, but I think as the year goes on, like every team, we’ll continue to get better and better.”

Montgomery Academy (1-0) never trailed but Autaugaville (2-3) had plenty of chances to overtake the tournament host as poor shooting plagued both teams for most of the first half.

“We did not play very well,” Mantooth said. “We didn’t shoot the ball very well. We didn’t play great but we’ve got a lot of inexperience that was playing for the first time on the varsity level. So it was kind of what I expected.”

Last year, Mantooth used the tournament to familiar himself as a first-year coach with a veteran team, putting different pieces of the puzzle in different places to maximize the team’s effort. A year later, it was the same substitution pattern but this time he was trying to find the best three players to put on the court with returning seniors Virginia Meacham and Johnson.

“We’re short on the bench right now just because we’ve got a couple that aren’t here (because of illness),” he said. “Hayes (Jenkins) got two early fouls that made us change the rotation a little bit but, yeah, that’s part of it because outside of those two this is all new for everybody else so we’re trying to find the best five that fit.”

To make matters worse, Johnson struggled with her shot the entire game, finally scoring her first points on a steal and layup with 3:20 remaining in the first half for a 12-8 lead that triggered a 10-0 run to close out the first half.

The senior point guard was 3 of 13 from the floor, including an 0 for 5 afternoon from behind the 3-point arc. She had five assists, six rebounds and four steals, missing the opportunity for double-digit assists because of the poor shooting of her teammates.

“Nothing was dropping,” she said of her eight-point performance. “Hopefully, that’s just a mindset type of thing. For some reason, I wasn’t in it today but tomorrow I will be.”

Claire Gary led MA with 10 points, followed by Meacham with nine, but Mantooth was expecting more than 17 points from his two seniors.

“Chloe and Virginia are going to have to score for us to be successful,” Mantooth said, “and both struggled with their shot a little bit. Both have been sick this week but that’s no excuse, they were good enough to play. But it’s very important for them to play well all-around for us.”

Both teams continue play in the tournament today, with Montgomery Academy playing Brewbaker Tech and Autaugaville playing county rival Marbury. Both games tip off at 1 p.m.