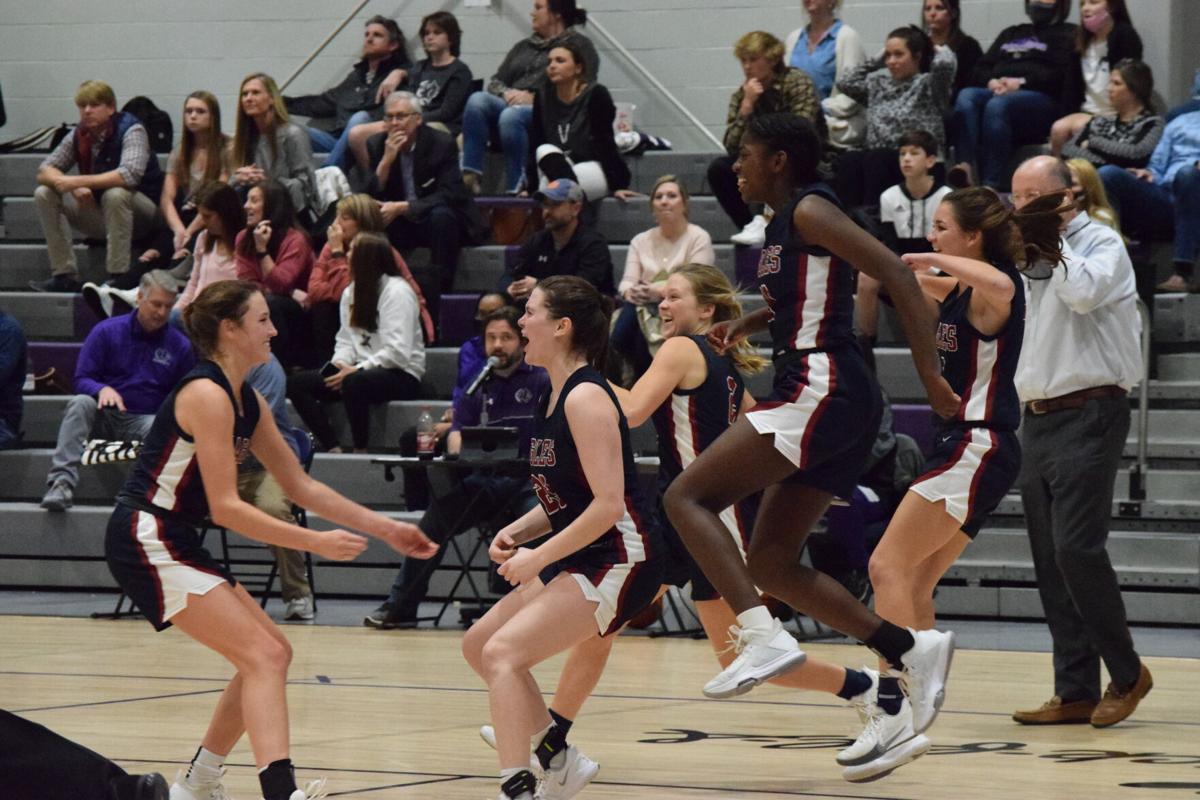 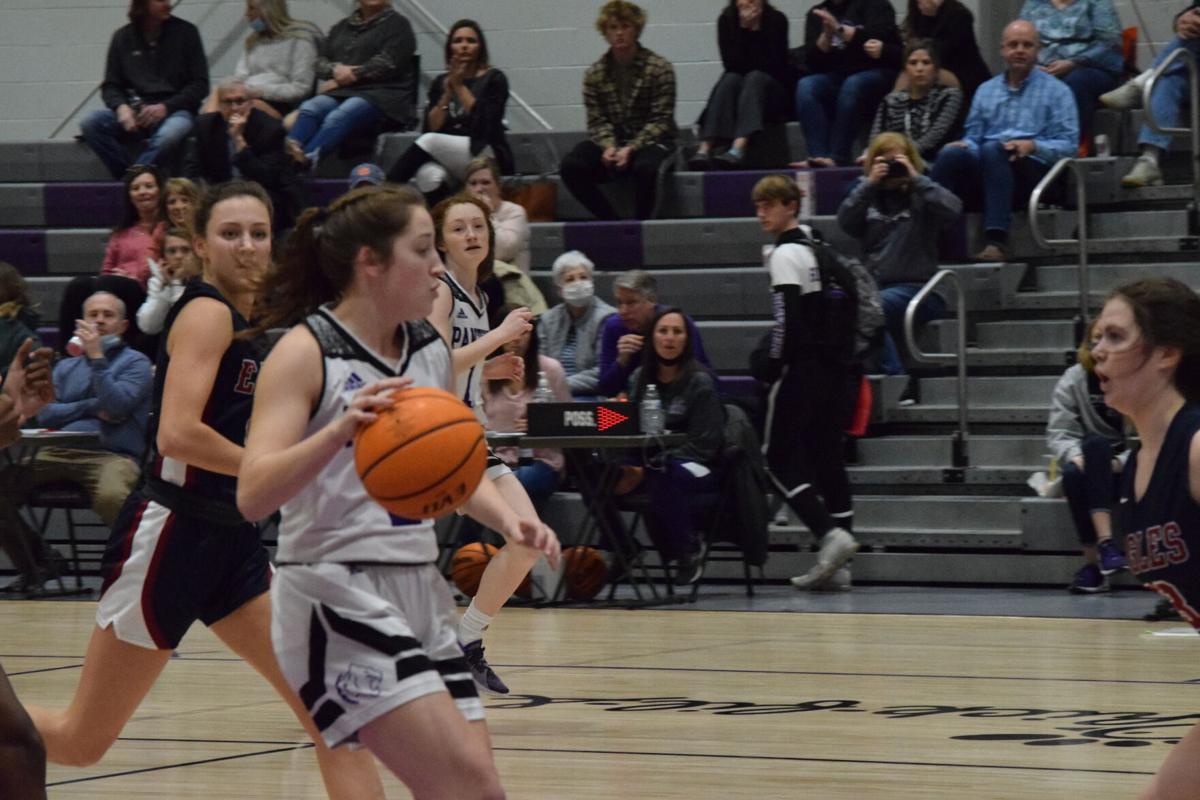 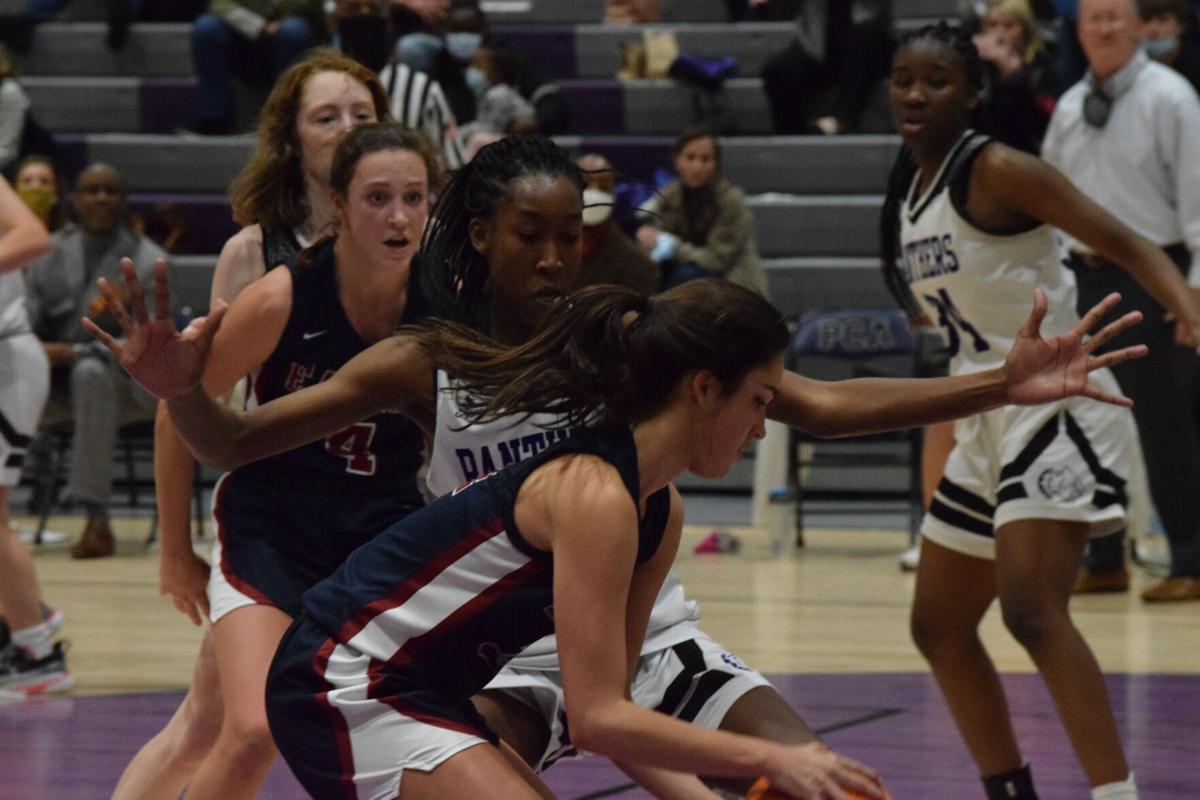 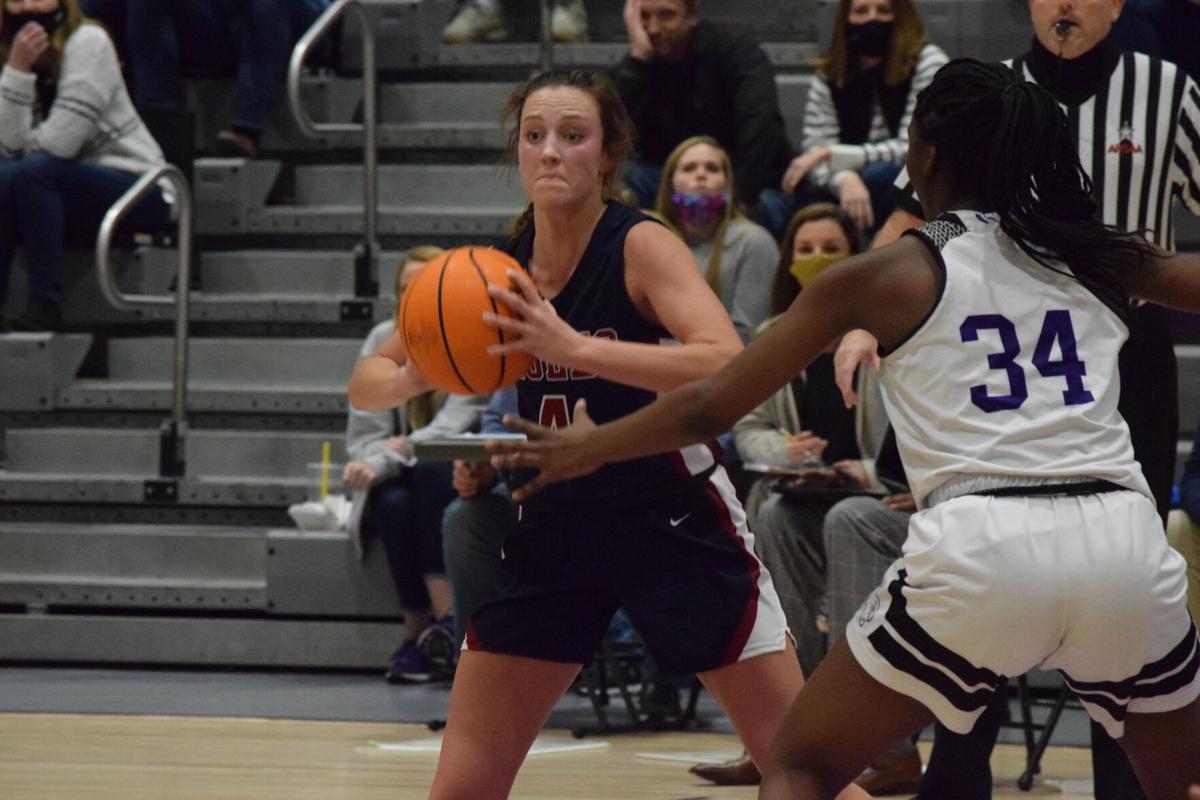 Montgomery Academy's Leighton Robertson looks for a teammate after her path to the basket is cut off by Prattville Christian's CoCo Thomas. 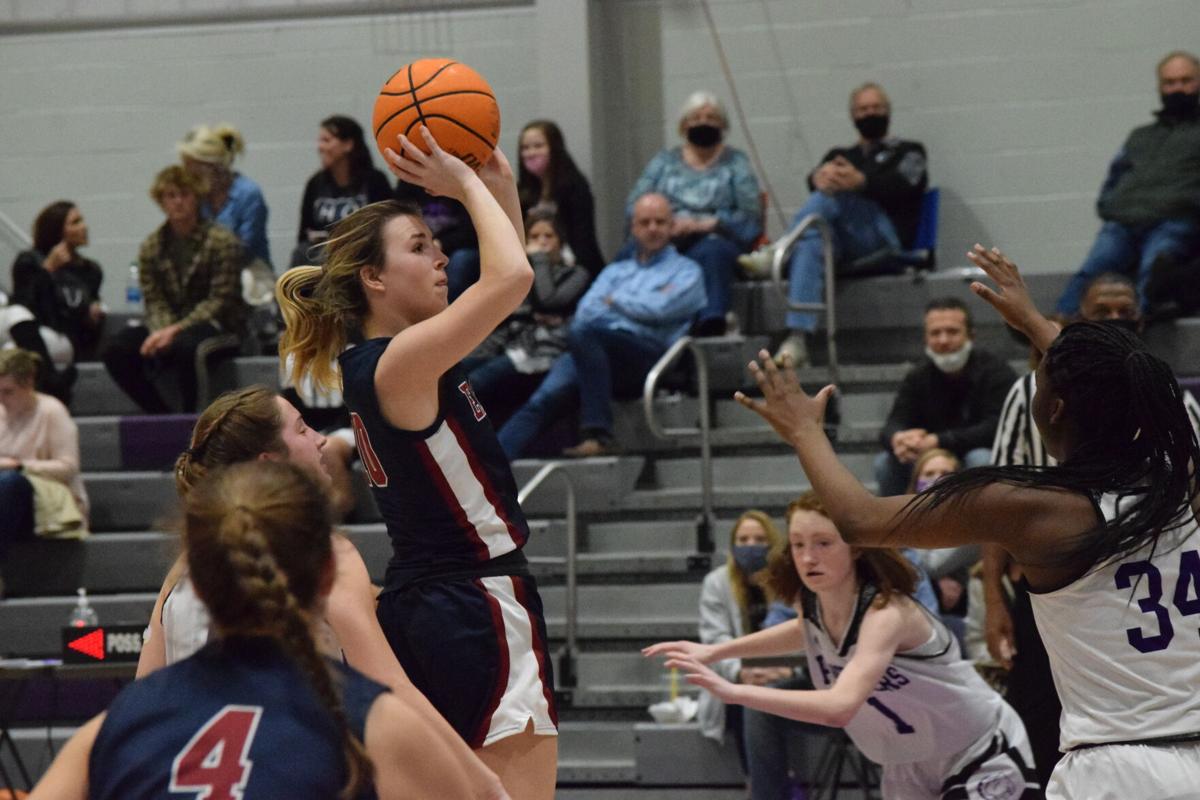 Montgomery Academy's Madi Caddell pulls up for a shot in the lane in the second half of Friday's game. 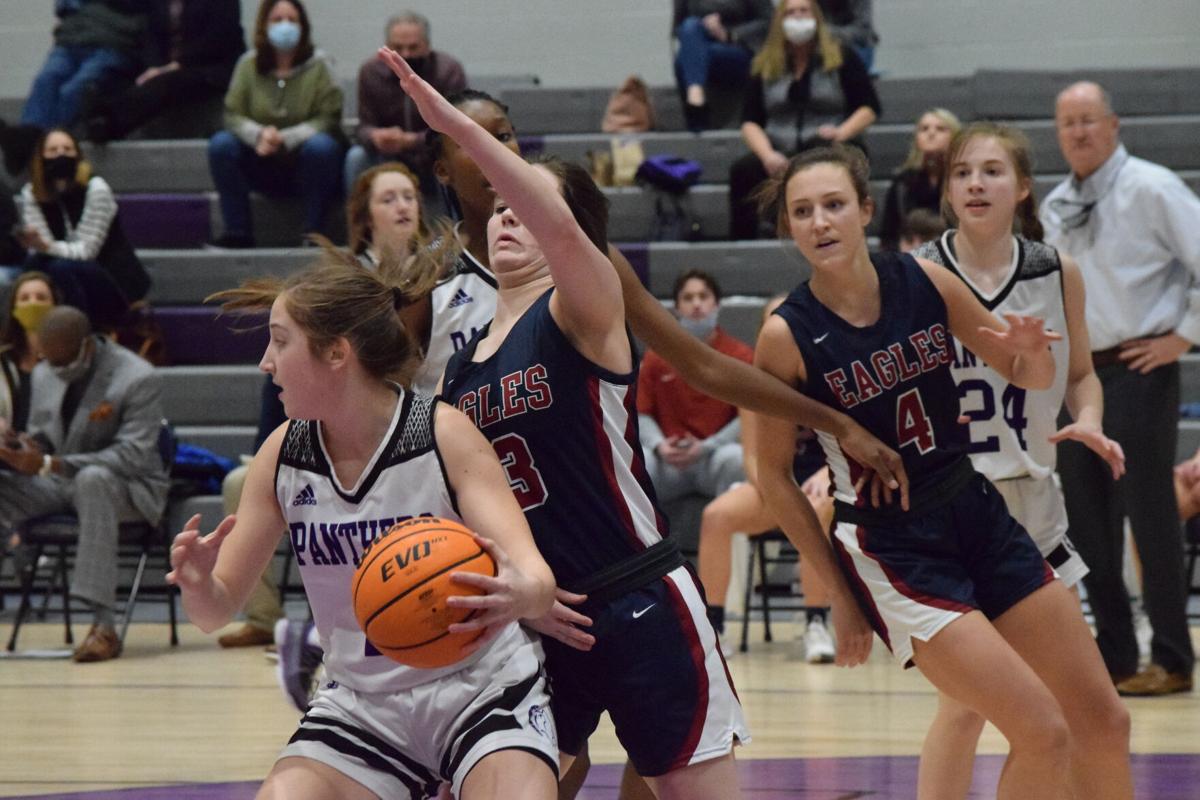 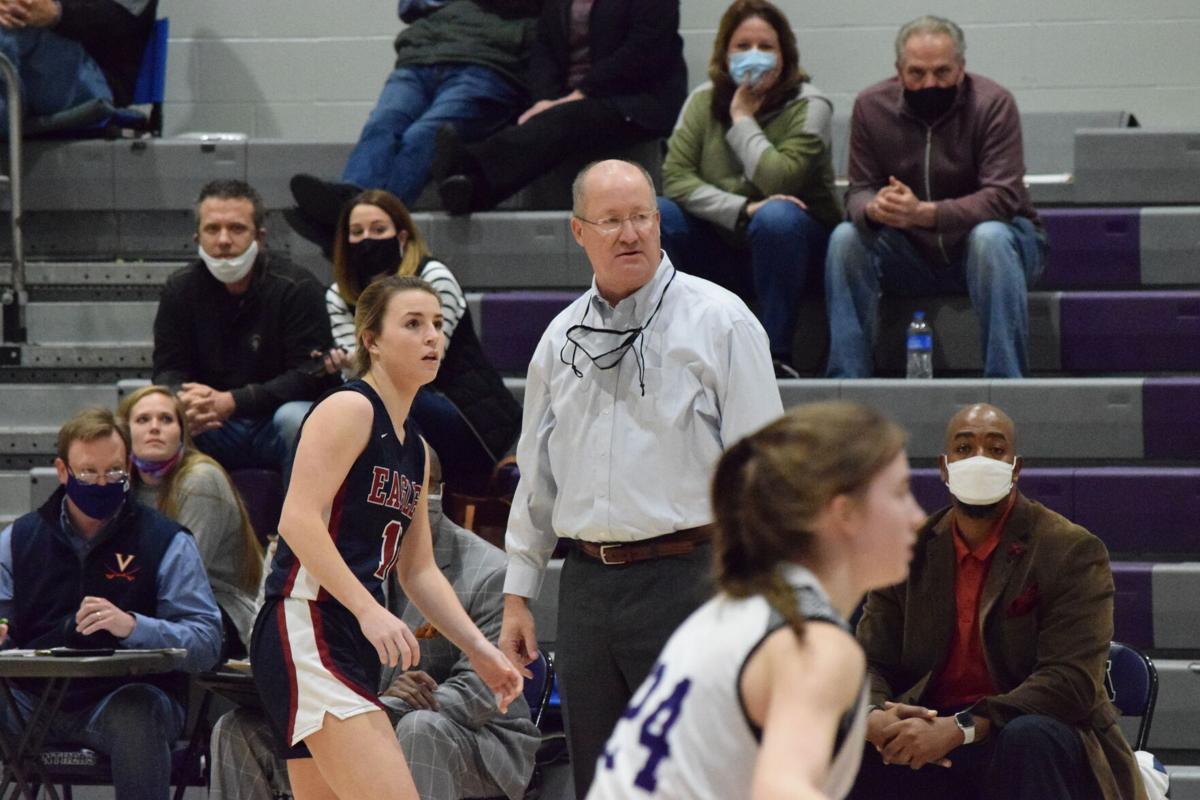 Montgomery Academy coach Reg Mantooth has a few words of advice for senior Madi Caddell during a stoppage of play. 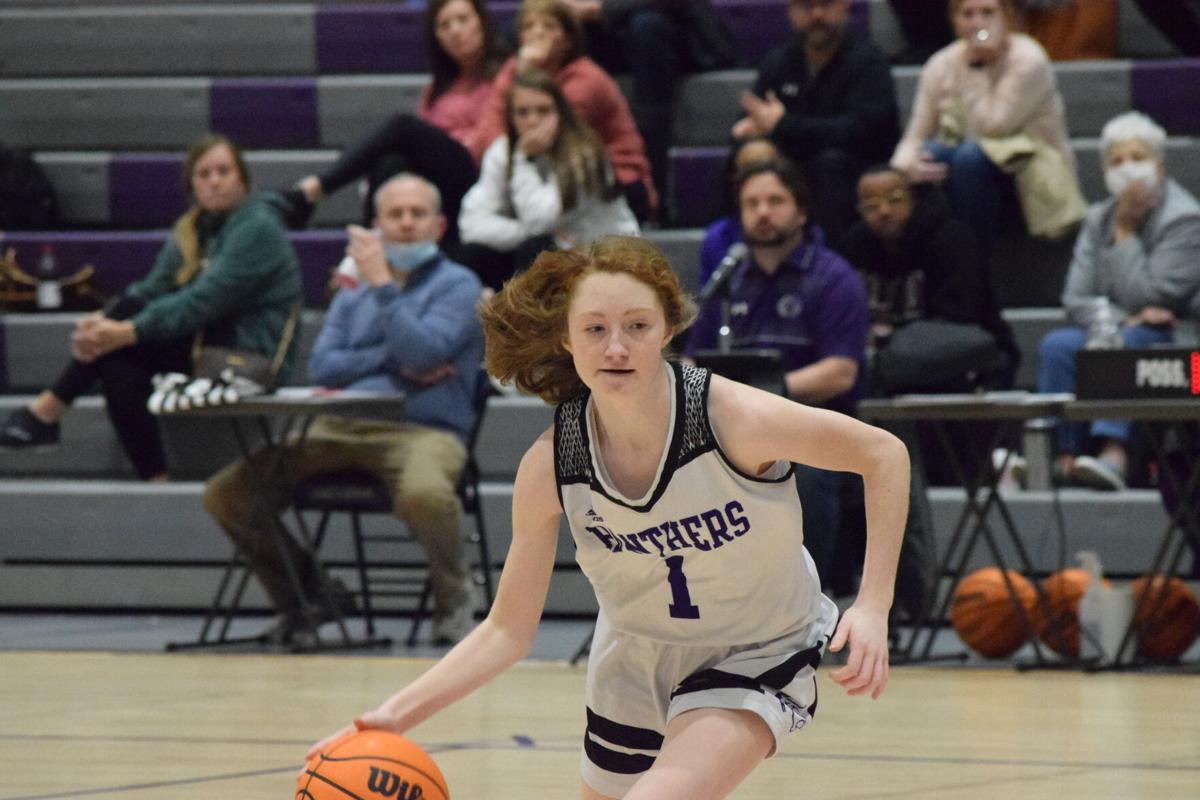 Prattville Christian Academy's Avery Rogers dribbles around the Montgomery Academy defense in the first half of Friday's game.

Montgomery Academy's Leighton Robertson looks for a teammate after her path to the basket is cut off by Prattville Christian's CoCo Thomas.

Montgomery Academy's Madi Caddell pulls up for a shot in the lane in the second half of Friday's game.

Montgomery Academy coach Reg Mantooth has a few words of advice for senior Madi Caddell during a stoppage of play.

Prattville Christian Academy's Avery Rogers dribbles around the Montgomery Academy defense in the first half of Friday's game.

PRATTVILLE -- It was late November when Montgomery Academy’s Gabby Ramirez stepped to the free-throw line with six-tenths of a second left, getting some encouragement from fellow senior Madi Caddell before sinking both free throws to beat Prattville Christian 48-47.

It was only fitting that as Caddell stepped to the free-throw line with 1.7 seconds remaining on Friday night against the Panthers, facing the exact same situation, Ramirez stepped between Caddell and the other players on either side of the lane for a quick word of encouragement that elicited a brief smile from Caddell.

Caddell stepped back to the line and knocked down the second attempt as well, giving Montgomery Academy a 60-59 win in overtime in the Prattville Christian Academy gym on Friday night.

The win gave Montgomery Academy (15-2) a 3-0 record in 3A Area 5, with each area victory coming in their opponents’ gyms.

“It was a big win,” Mantooth said. “It took a lot of heart and a lot of fight and a lot of effort. It wasn’t real pretty. We just kept fighting to get the win.”

It didn’t come without controversy. The two teams, as they did earlier this season in a pair of tournament meetings, battled evenly through the first quarter before PCA forged ahead, fell behind, then took the lead in the final minute of the game.

MA, which had led by six points with 3:30 left, trailed by five with 57 seconds left as Ramirez made her only shot of the game, a 3 pointer to trim the deficit to a basket. A foul called against Leighton Robertson on a scramble for a loose ball sent Ella Jane Connell to the line with seconds remaining. Connell made the first attempt to put PCA up by three, but missed the second.

Robertson rebounded the miss, sprinted downcourt and pulled up for a shot as the horn sounded. Her shot came after the horn sounded and her right foot was over the 3-point arc, but officials counted the shot as a 3 pointer, sending the game into overtime.

PCA coach Jason Roberson lobbied the officials to overturn the call, to no avail, but neither coach wanted to offer an opinion on whether the shot left Robertson’s hands in time to count.

In overtime, the Panthers surged back ahead with a pair of baskets by Hannah Jones in the paint, but connected on just 3 of 7 from the free-throw line, leaving the Eagles within striking distance.

MA got a basket in the paint from Ann Cobern Chapman and went 6 of 6 at the free-throw line, using four free throws from Robertson and the game-winning pair from Caddell.

The Panthers (17-3) have now lost all three meetings with Montgomery Academy, but defeated everyone else on their schedule.

“They’re competitive,” Roberson said of his players, “but MA is a different level of competitiveness. They have six seniors who know it’s their last go-round. They want to win a state championship really bad. I think our girls want to win a state championship, I’m not sure we want to win it as bad as MA. We had a good lead, up double digits in the first half, and we tend to relax instead of continuing to do what we’re supposed to do.

“It’s kind of like the big sister and the little sister. Sometimes, as a big sister, you let the little sister get the best of you, then you say, ‘I’ve had enough.’ I kind of felt like that’s what was happening (when MA took control midway through the fourth quarter). I was really, really proud of our girls for how they responded to that. I wasn’t sure they had that in them.”

“It was definitely not what we were expecting,” Caddell said. “We prepared for the defenses they could have come out with, but we were not expecting that. But we all have trust in the rest of our teammates. Even though Chloe and Gabby are both central to our team, everyone else on the team plays a huge role and we knew it was going to be OK.”

And while Johnson’s exit in overtime hurt the Montgomery Academy offense, the Panthers suffered a similar blow seconds later when Connell fouled out, leaving the game after scoring 19 points, six rebounds, five assists and four steals.

PCA travels to Trinity on Tuesday while MA returns home to play Catholic as both teams continue their quest for the Area 5 regular-season title while trying not to look ahead to the Jan. 26 rematch in the MA gym.

“Our two teams are so competitive with each other,” Caddell said. “They beat us once last year and ever since then, it’s been so competitive. Both teams just really want it bad.”