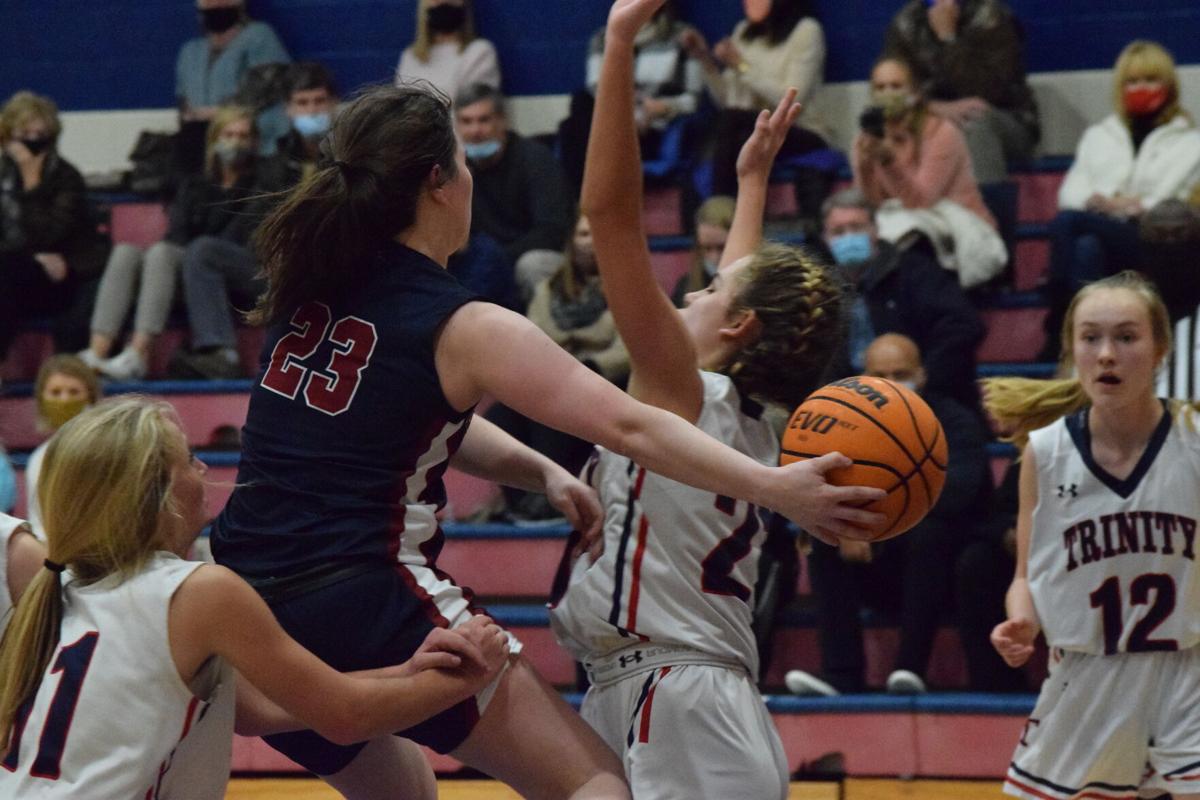 Montgomery Academy's Chloe Johnson (23) passes the ball to a teammate but is called for a charge against Trinity's Kaylee Peevy (21) in Friday's area opener for both teams. 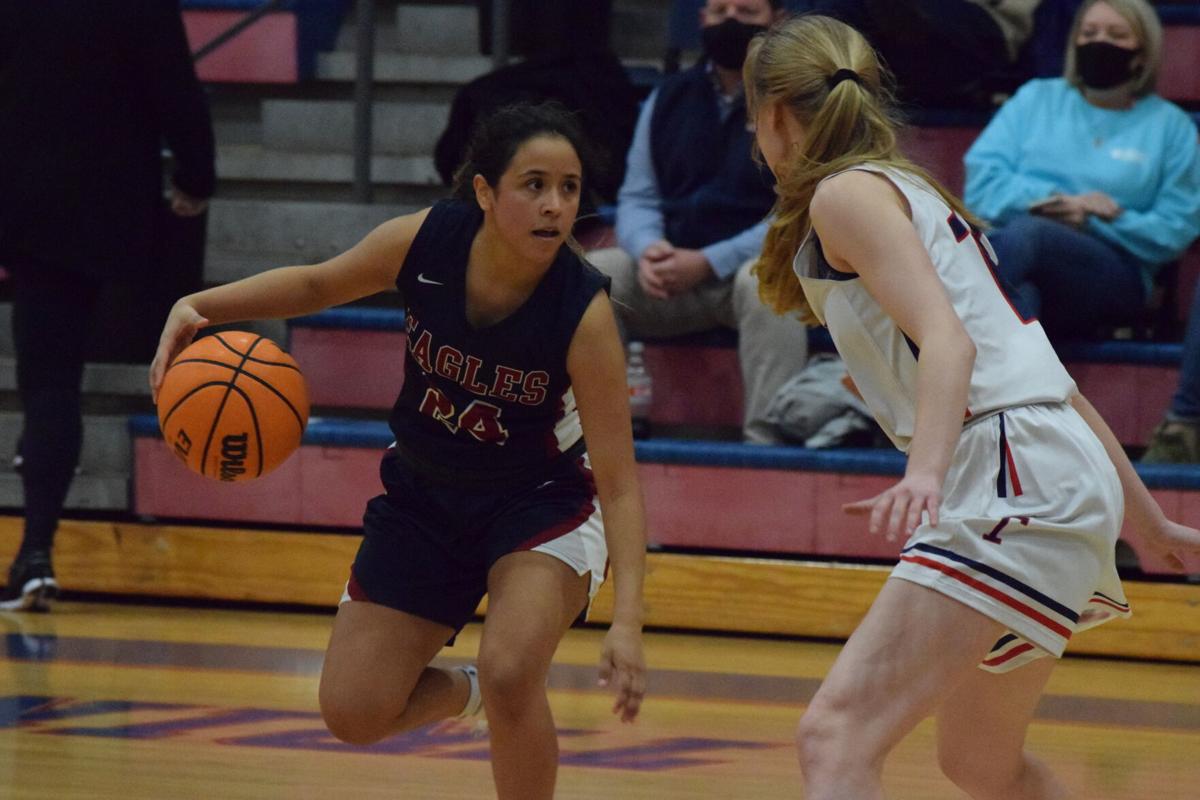 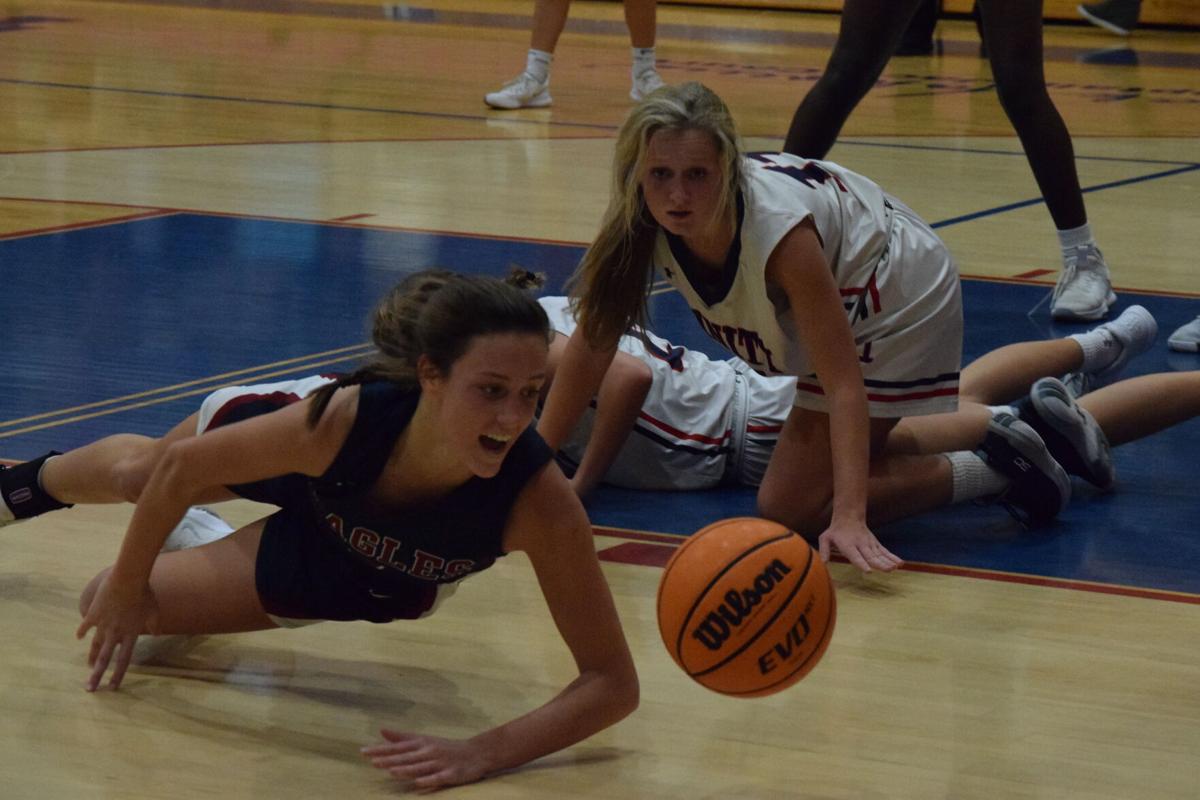 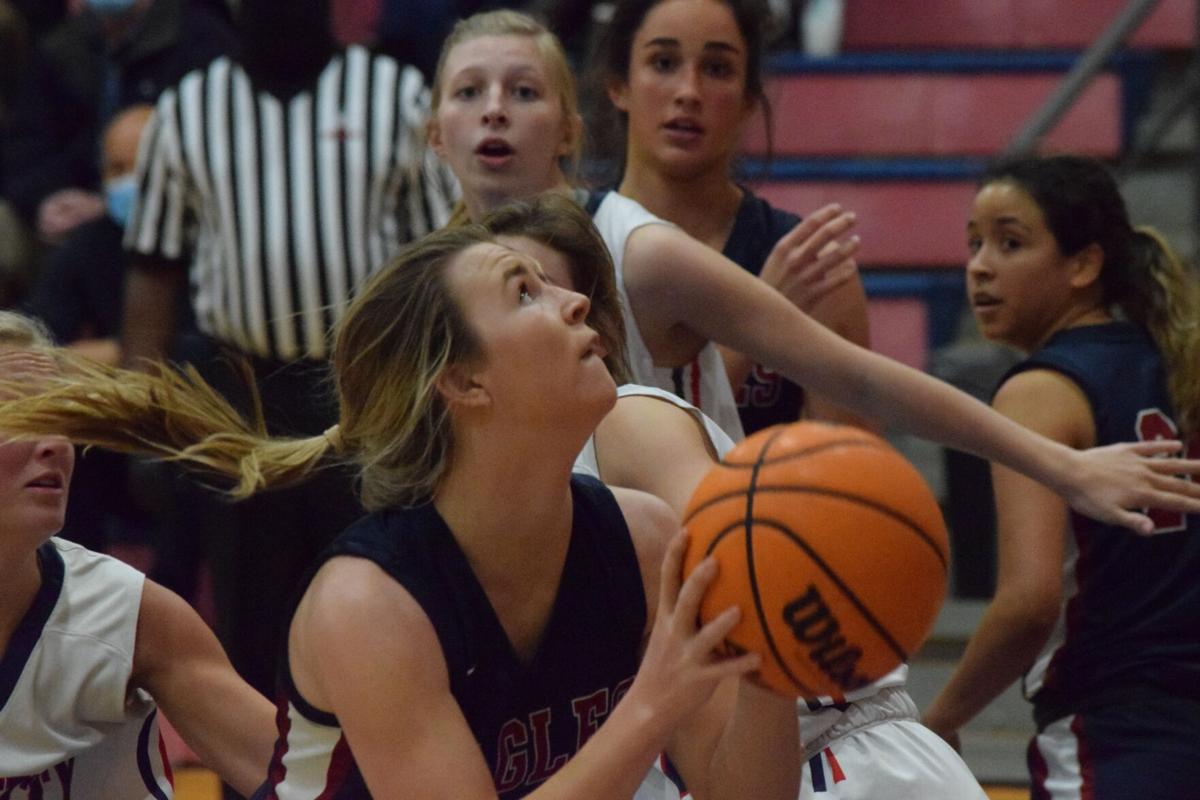 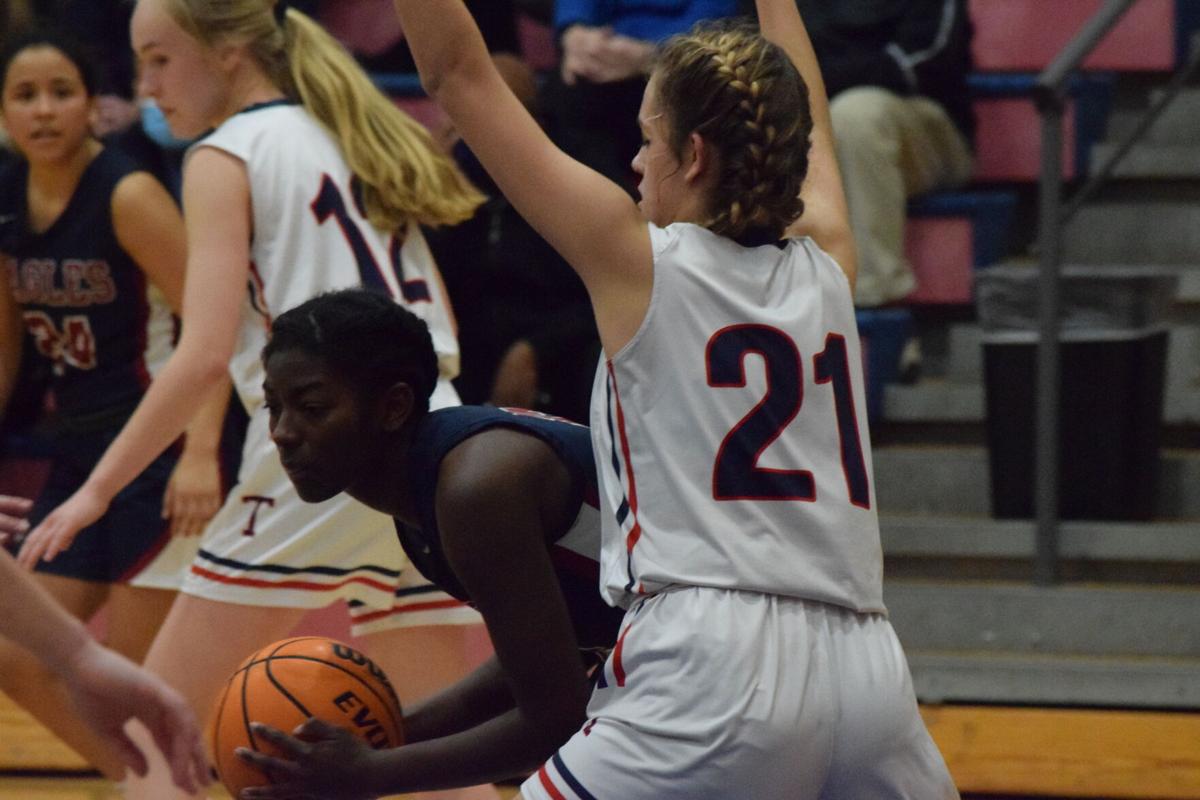 Montgomery Academy's Anaya Thomas gets rebound but Trinity's Kaylee Peevy (21) is there to stop her from getting off a shot. 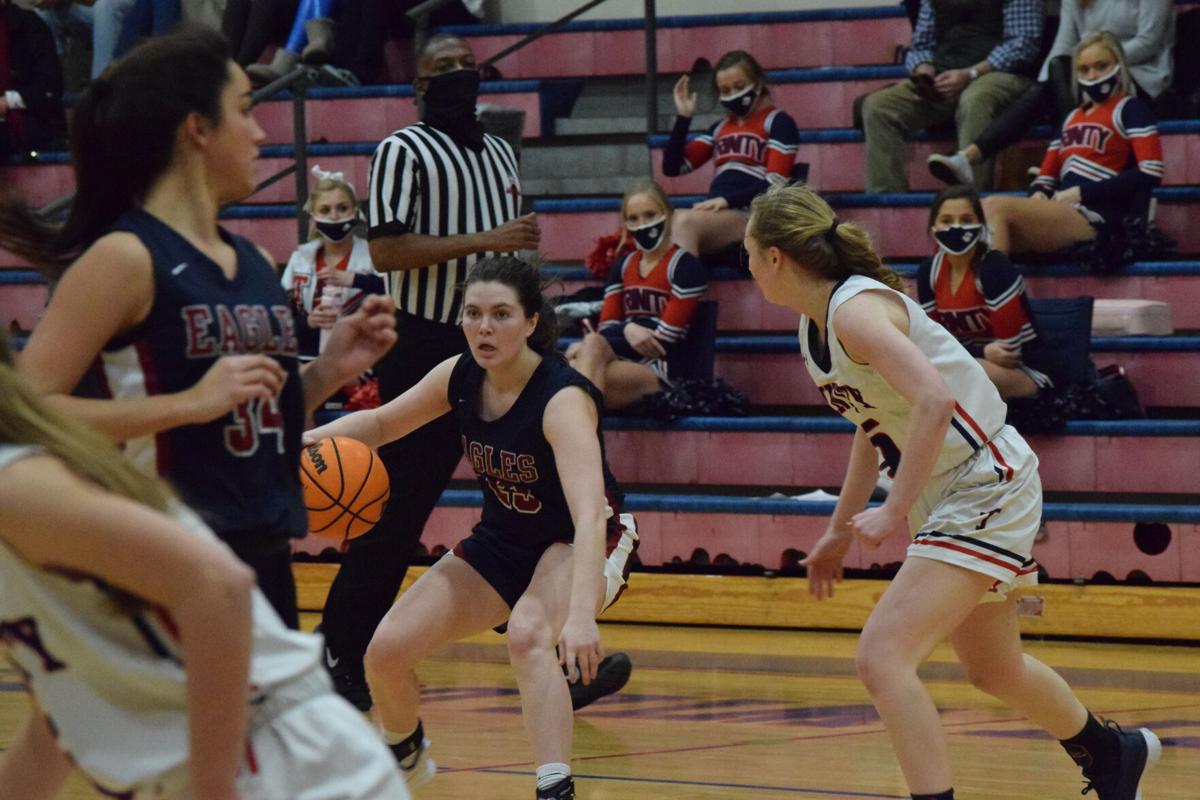 Montgomery Academy's Chloe Johnson (23) passes the ball to a teammate but is called for a charge against Trinity's Kaylee Peevy (21) in Friday's area opener for both teams.

Montgomery Academy's Anaya Thomas gets rebound but Trinity's Kaylee Peevy (21) is there to stop her from getting off a shot.

If the first meeting was an instant classic, the rematch didn’t have quite the same flair.

If Trinity made a statement in a win over Montgomery Academy in the Jack Schweers Capital City Classic three weeks ago, the Eagles returned the favor with a dominating 57-25 win over the Wildcats in the area opener for both teams on Friday night in the Trinity gym.

The Wildcats came out in that December meeting with an intense defensive effort that seemed to catch Montgomery Academy off guard. In the rematch, the Eagles came out with some defense of their own, turning Trinity miscues into easy layups on the other end of the court, building an insurmountable lead by the end of the first quarter and leading by as many as 40 points late in the third quarter.

“I think their defense played into their offense,” Trinity coach Blake Smith said. “It got them up and down the floor a little better and we didn’t match up well in transition. I just think we forced a little bit. If you’re a program that is starting to experience success, you have to learn how to manage that. At the end of the day, I think that was new territory for us and we didn’t respond to it very well.

“In our tournament, we wanted it. Tonight, it was pretty quick that they were out to make a statement.”

Montgomery Academy (13-2) had a different look early as Chloe Johnson took command of the floor, putting together her best performance since transferring to the school over the summer. The junior, who won AISA player of the year honors last season, has provided some gentle leadership on a senior-laden team, preferring to pass the ball to open teammates.

On Friday, she came out with a shooting touch and finished with 11 points, nine rebounds, four steals, six assists and one blocked shot, most of that coming in the first half before the game got out of hand.

“It was definitely as aggressive as she’s played offensively,” Montgomery Academy coach Reg Mantooth said. “It’s something we talked to her about. I think the first time we played, she shot twice the whole first half and four times for the whole game. We wanted her to be a little more aggressive, looking to score. A new player trying to fit in with a new team, we’re still trying to fit everybody together, but that was definitely something we wanted.”

On the other end of the floor, Emma Kate Smith discovered that Montgomery Academy’s transition offense resulted in basketball and defensive pressure from the Eagles that held the area’s top scorer without a point in the first half.

“I think they knew what things were coming,” Smith said. “She missed three or four that she would have normally made a couple of them, but they just played her harder and knew what was coming and I think she backed off a little bit.”

Leighton Robertson guarded her in the first meeting as well, but this time Smith’s points (she had eight in the game) didn’t come until the Eagles had built a 40-point lead.

“I think the only thing we did different was try to make it a little tougher for her to catch the ball,” Mantooth said. “She’s hard to guard. I thought Leighton did a great job on her.”

“In the first game, it was harder for them to get into their offensive stuff,” Smith said. “In this game, it was a lot harder for us. Sometimes, I thought we got a little careless. They start hitting shots, we throw up quick ones or throw it away and it snowballs quick.”

Mary Alice Sasser’s 3 pointer was the only points for Trinity (12-2) in the first quarter, while Maddie Smith had a pair of baskets to account for the Wildcats’ only points from the field in the second quarter. Smith finished with 11 to lead the Wildcats.

While the loss dropped the Wildcats to 0-1 in area play, there is little time to reflect as Trinity travels to Prattville Christian on Tuesday and Catholic on Friday for two more area games.

“Our message before the game was, look, we’re talking about going on a journey and progressively getting better until the end,” Smith said. “We’d love to win this game but this game is not what fully controls us. We’ll learn some things from it.”

Likewise, the Eagles travel to Catholic on Tuesday and Prattville Christian on Friday and have little time to rest on a 1-0 area start.

“That’s just one of six,” Mantooth said. “We’ve got five more area games. I feel like they’ll all be tough. We’re just hoping to get better.”