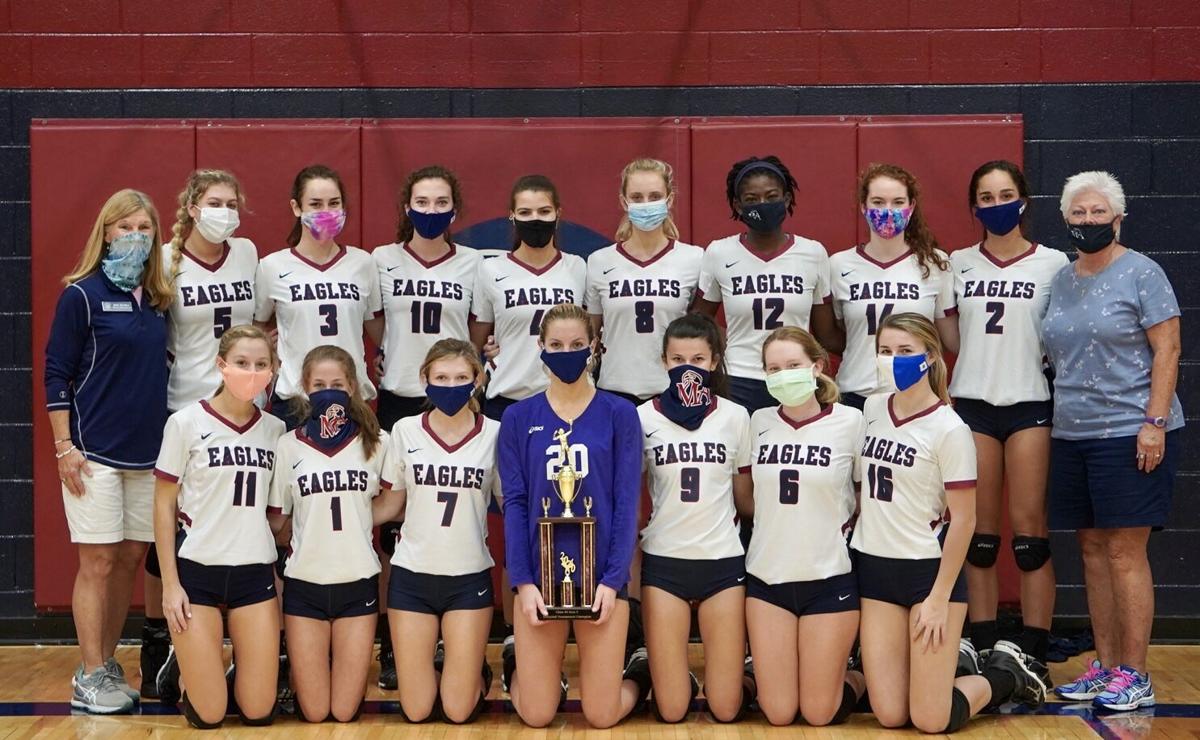 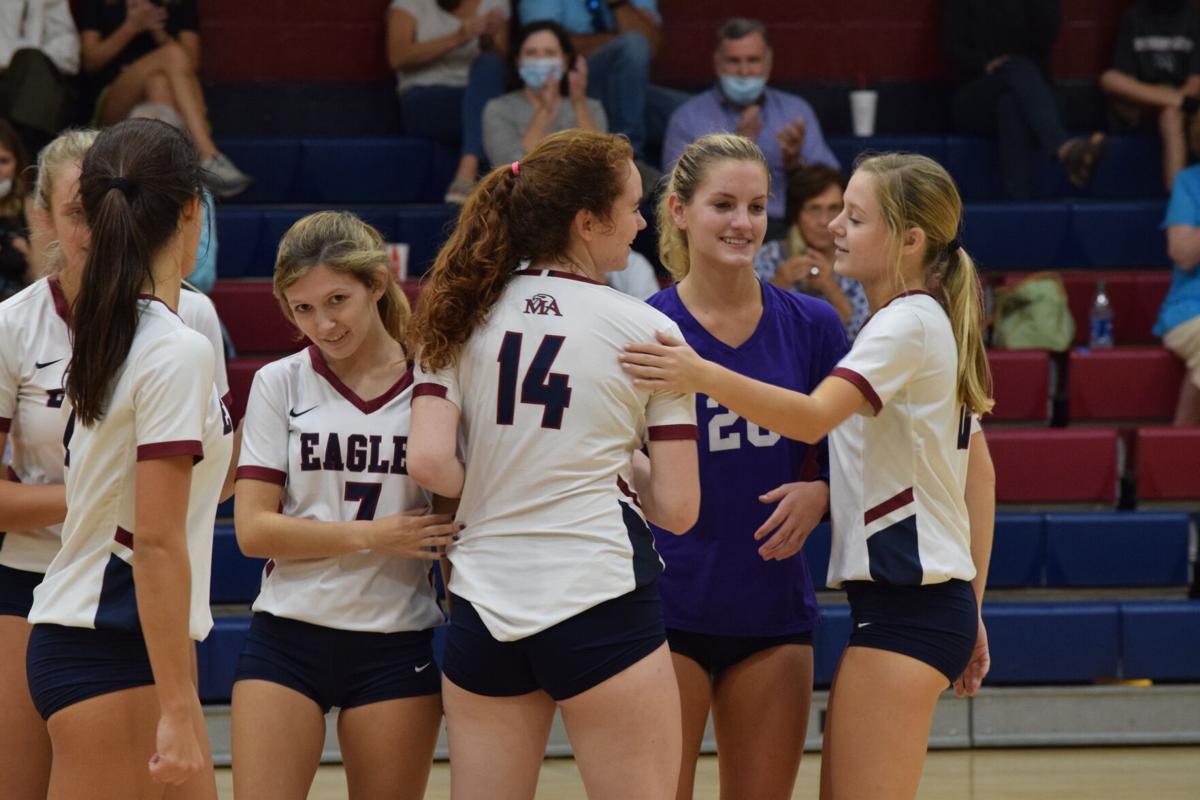 Montgomery Academy players congratulate each other after sweeping LAMP to win the 4A Area 3 tournament championship. 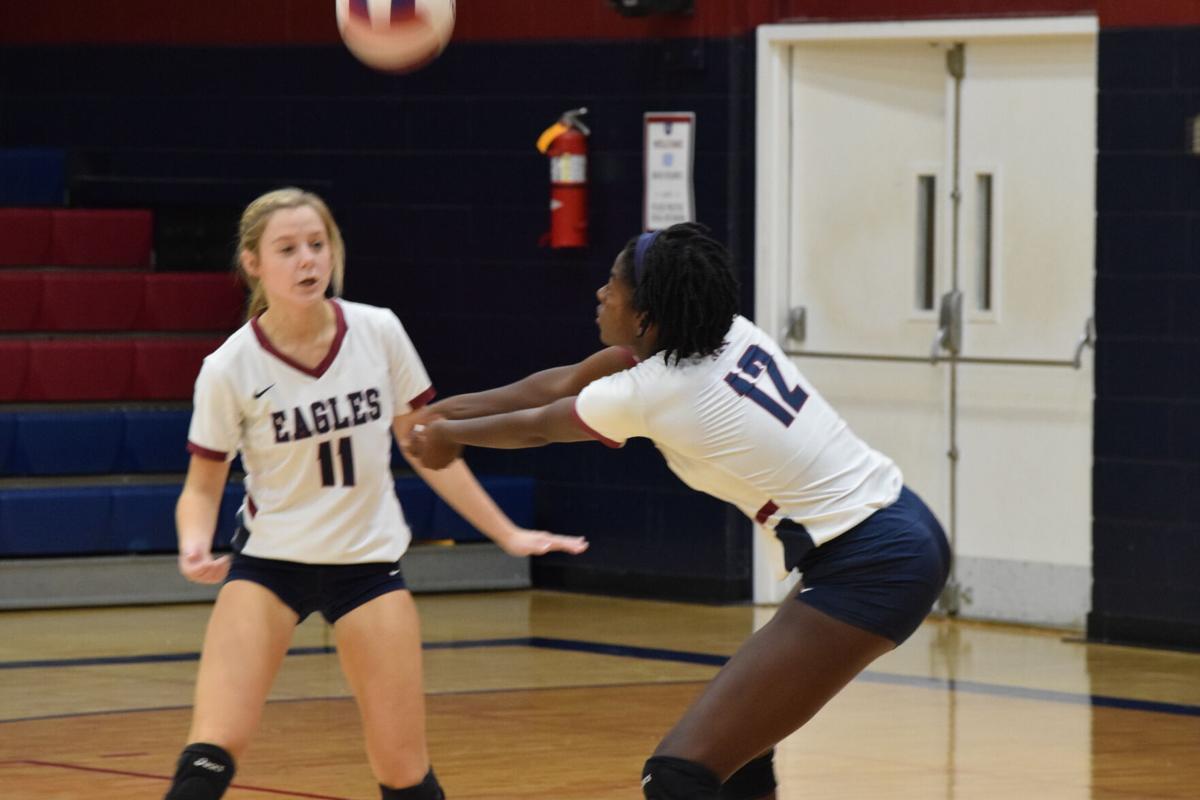 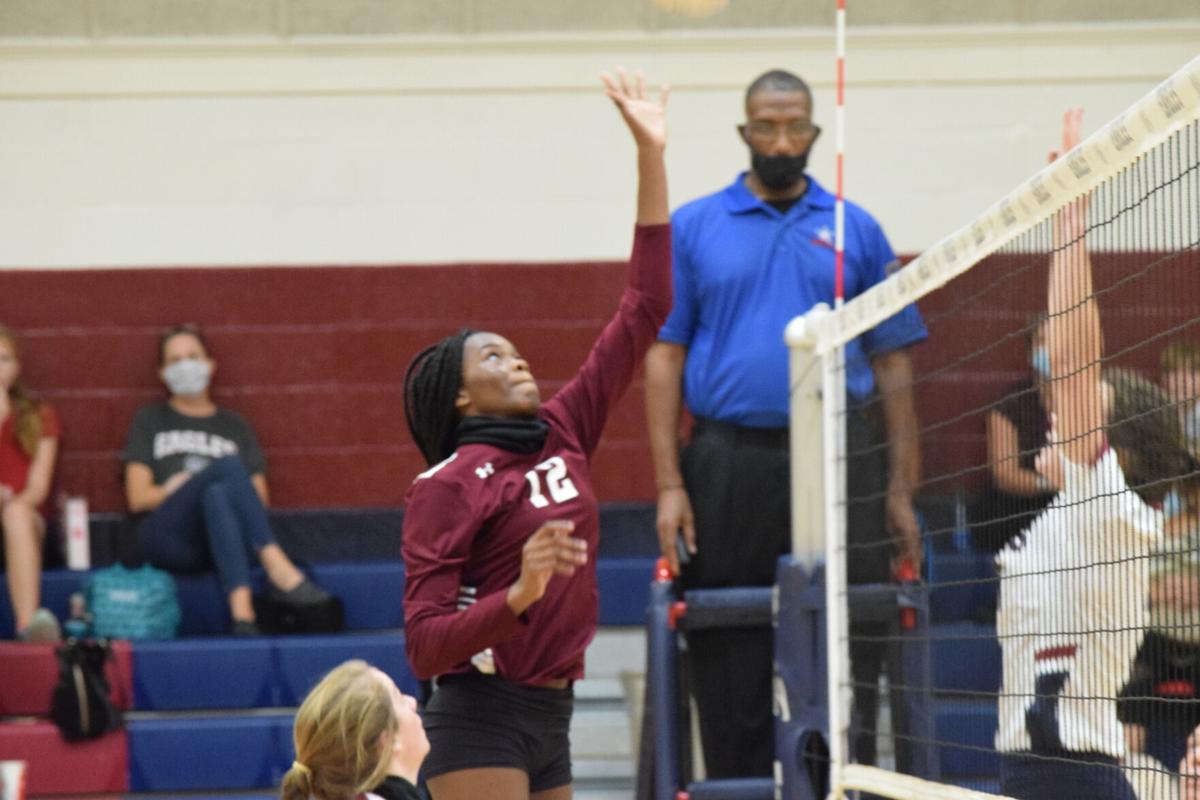 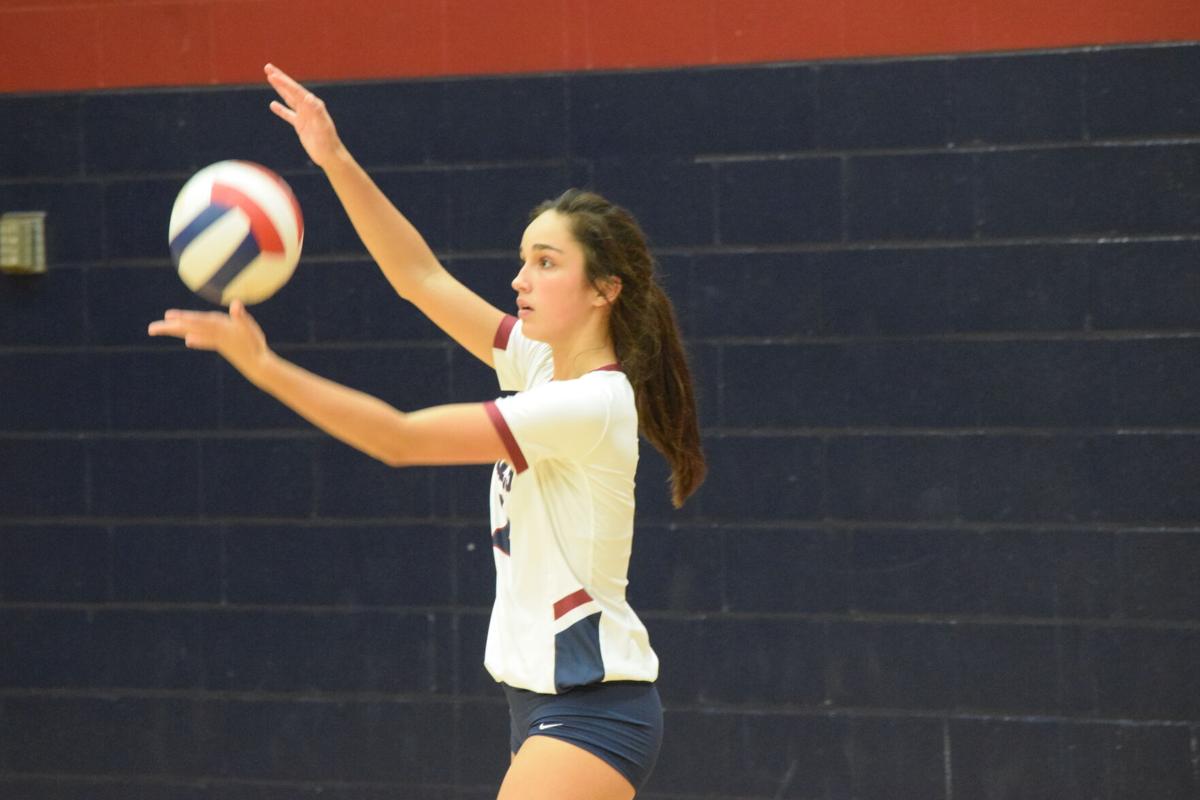 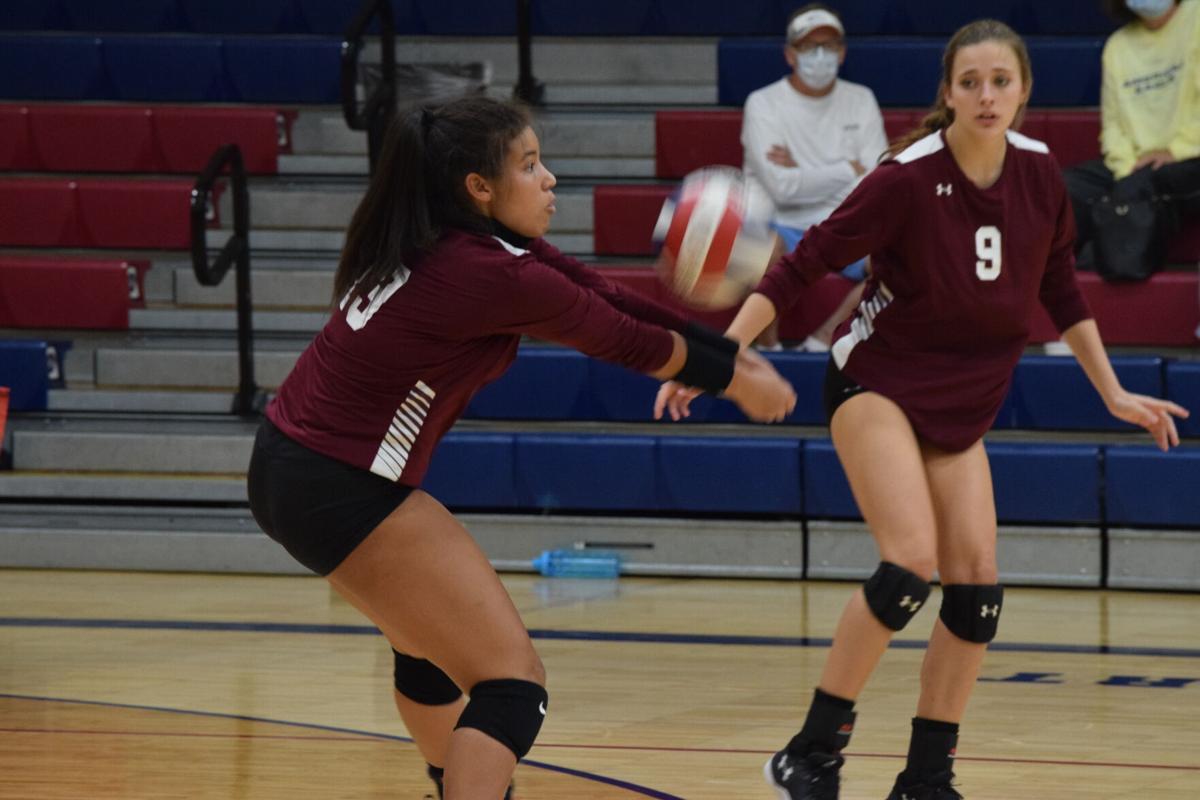 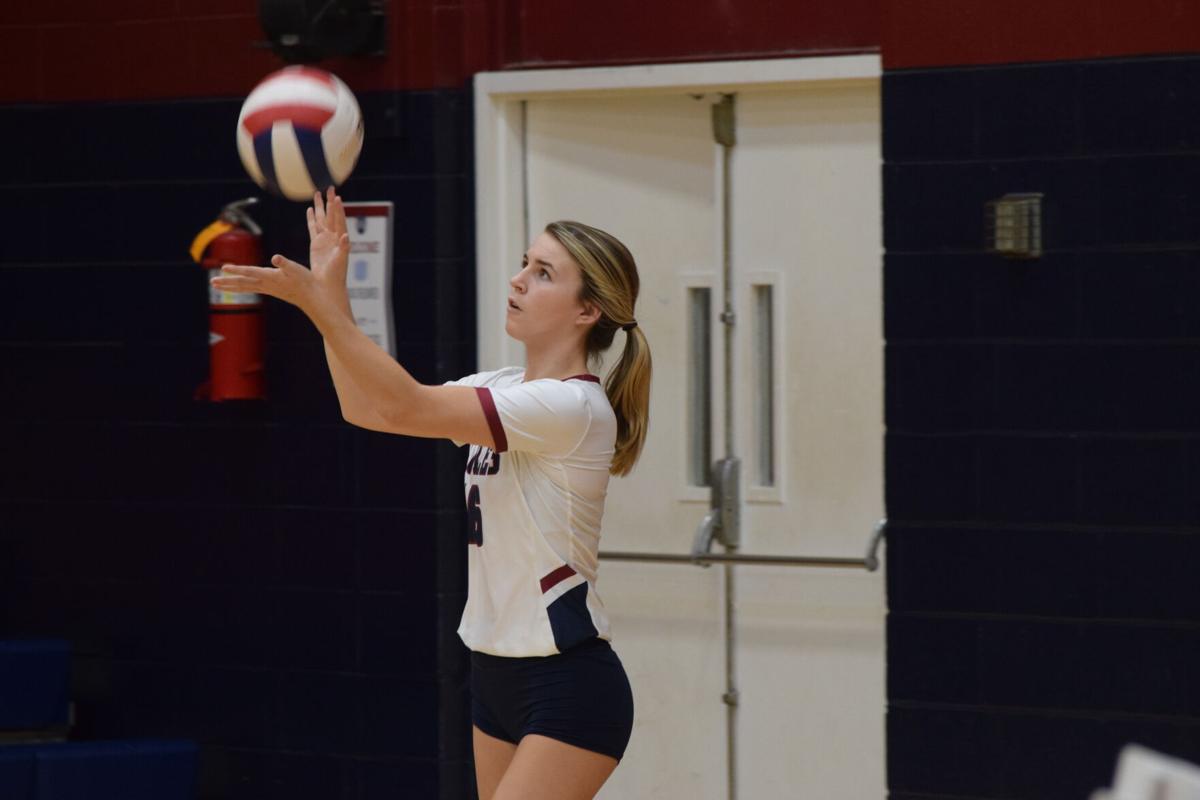 Senior Madi Caddell serves for Montgomery Academy in its championship match with LAMP on Wednesday. 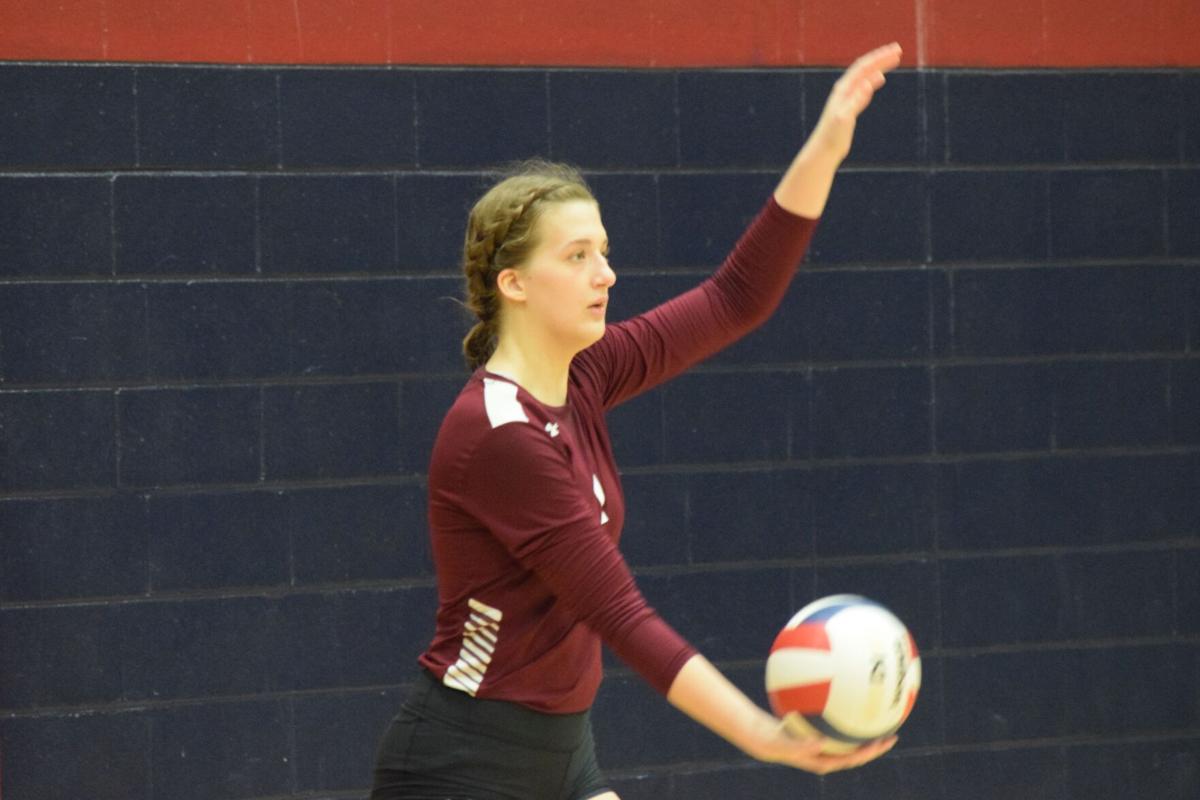 LAMP's Grace Hoffman prepares to serve for the Golden Tigers in their championship match with Montgomery Academy on Wednesday.

Montgomery Academy players congratulate each other after sweeping LAMP to win the 4A Area 3 tournament championship.

Senior Madi Caddell serves for Montgomery Academy in its championship match with LAMP on Wednesday.

LAMP's Grace Hoffman prepares to serve for the Golden Tigers in their championship match with Montgomery Academy on Wednesday.

LAMP had Montgomery Academy on the ropes, at least for a minute.

The Golden Tigers were leading the two-time defending state champions in the second set 20-19 and were poised to even the championship match in the 4A Area 3 tournament at Joe Mooty Court.

Montgomery Academy escaped with a 25-23 win and the visitors were never the same, losing in straight sets to the Eagles for the third time this season.

“I’m really proud of how we played in the second set,” LAMP coach Dee Wilson said. “I feel like we had some fight in us, we played hard. We had a few errors that were our fault. If we could have eliminated just a couple of those errors, I feel like we could have won. To win a set against them, I think would be a huge confidence builder for us because they’re a great team. You’re the underdog, you know that going into it and you strive to beat teams like that.”

On their last trip into the arena, a shell-shocked and intimidated LAMP team was battered by the Eagles. Some of that psyche resurfaced in the third set on Wednesday. After coming oh-so-close, the Golden Tigers fell behind 9-1 in the third set and were never a threat in losing 25-9. But what if they had won the second set?

“I would have loved to have seen it,” Wilson said. “In my heart, if they had gotten that win, it would have given them a boost and they would have surprised me. This is a hard-working bunch of girls I’ve got. We’ve continued to get better all year long. One set changes the whole mentality.

“I think we came out flat in the third set. We were building up our balloon and then it just kind of popped and we didn’t restart strong. That’s something we have to go back and work on because we’re going to need that restart, when we’re down, through the rest of the postseason.”

Montgomery Academy won the first set 25-12, dominating early and pulling away late as kills came from all sides of the court and from an experienced group of seniors. Anaya Thomas on the left side and Ann Cobern Chapman on the right were dangerous as usual, but McRae Freeman made an early statement and Virginia Meacham and Kay Yelverton got in their shots as well.

“Isn’t that a great thing?” Montgomery Academy coach Julie Gordan asked. “The last three years, that’s why we’ve been so successful is you don’t have to rely on that one person. If somebody has an ‘off’ day, you’ve got five other hitters that can get kills and get us points. It’s hard to defend.

“So how do you scout this team? Well, the right side scores well, the middle scores and so does the outside. You’d better play good all-around defense and you’d better block well.”

Thomas was the most deadly, taking charge in the second set when the Golden Tigers threatened an upset and again in the third set to put away the area rival.

“When she’s on and she swings, it’s going down,” Gordan said. “She has really picked it up the second half of the season with consistency. She’s just nailing the ball. She’s on a different level. She’s a determining factor.”

Thomas was selected as the tournament’s most valuable player and was joined on the all-tournament team by Madi Caddell and Ann Cobern Chapman, Grace Hoffman and Olivia Hughes and Alabama Christian’s Lynleigh Stephen.

Just as LAMP was on the verge of winning their first set against the Eagles this season, Gordan called a timeout to refocus her team.

“That’s when I went in there and rattled their cage,” she said. “They get complacent.”

And getting complacent against LAMP is not a wise move, Gordan warned.

LAMP senior Claire Conway, sidelined for more than a month by a severely sprained ankle, returned to the floor for the first time since early September for a few moments against both Alabama Christian and Montgomery Academy, drawing a rousing cheer from both teammates and LAMP fans in attendance.

“This is her first day,” Wilson said. “She’s been practicing about 50 percent and I wanted to get her on the floor and give her an opportunity to get comfortable. They (teammates) loved it. These girls love one another and they know she’s been out and she’s been working really hard to get back out here. When she went on the court, our bench is ‘up,’ our fans are ‘up’ because it’s her senior year and we want her out there.”

LAMP (19-9) will travel to Montevallo for the sub-regional round on Saturday. The winner will face the winner of Dora-Geneva in the regionals the following Friday at Garrett Coliseum. A Friday win will earn the Golden Tigers their second consecutive trip to the state tournament.

MA (28-7) will play host to Bibb County in the sub-regional round on Saturday. The winner will face the winner of Straughn-Indian Springs in the regionals the following Friday at Garrett Coliseum.

All games are scheduled for Saturday

All winners advance to regionals at Garrett Coliseum