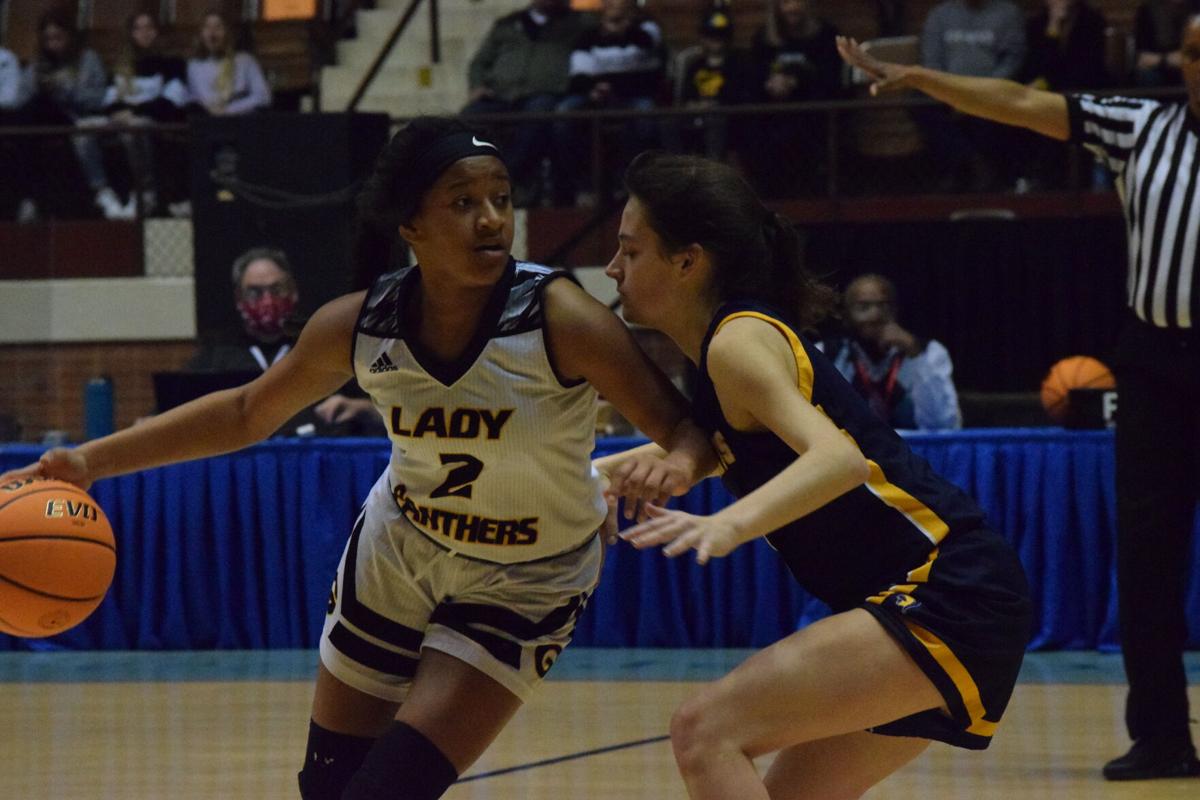 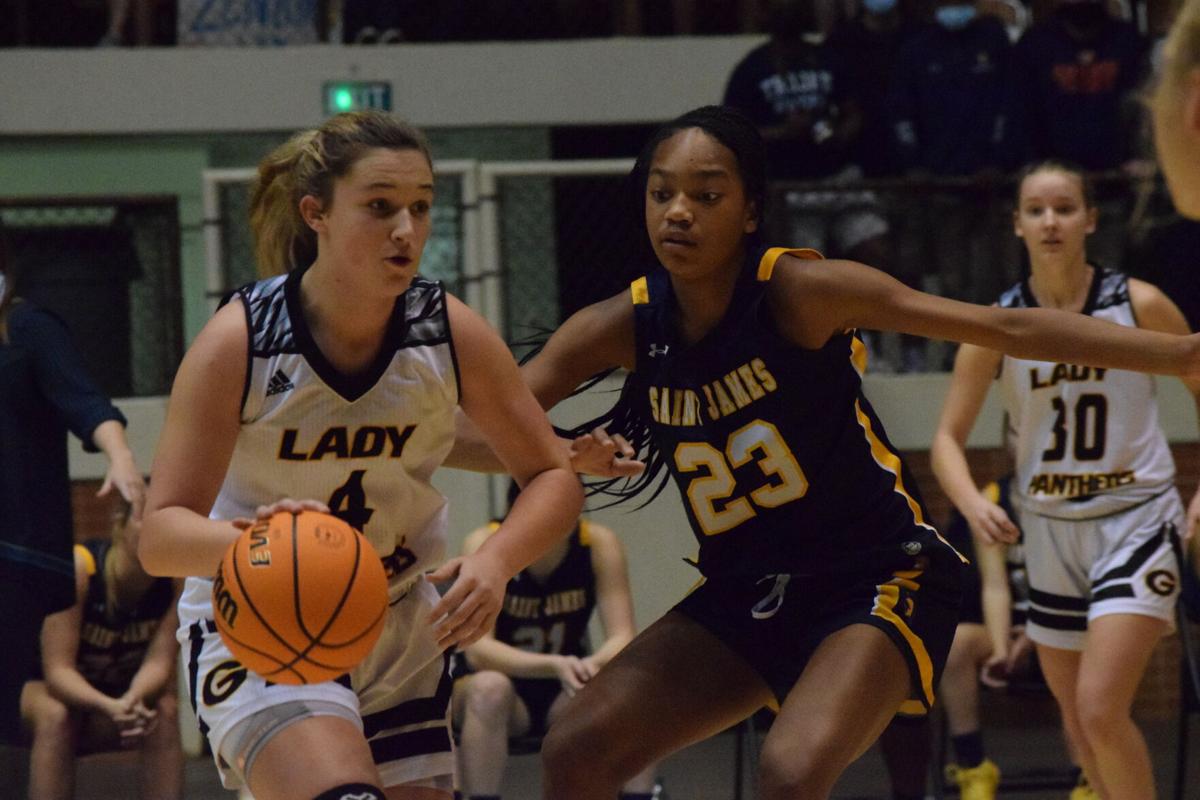 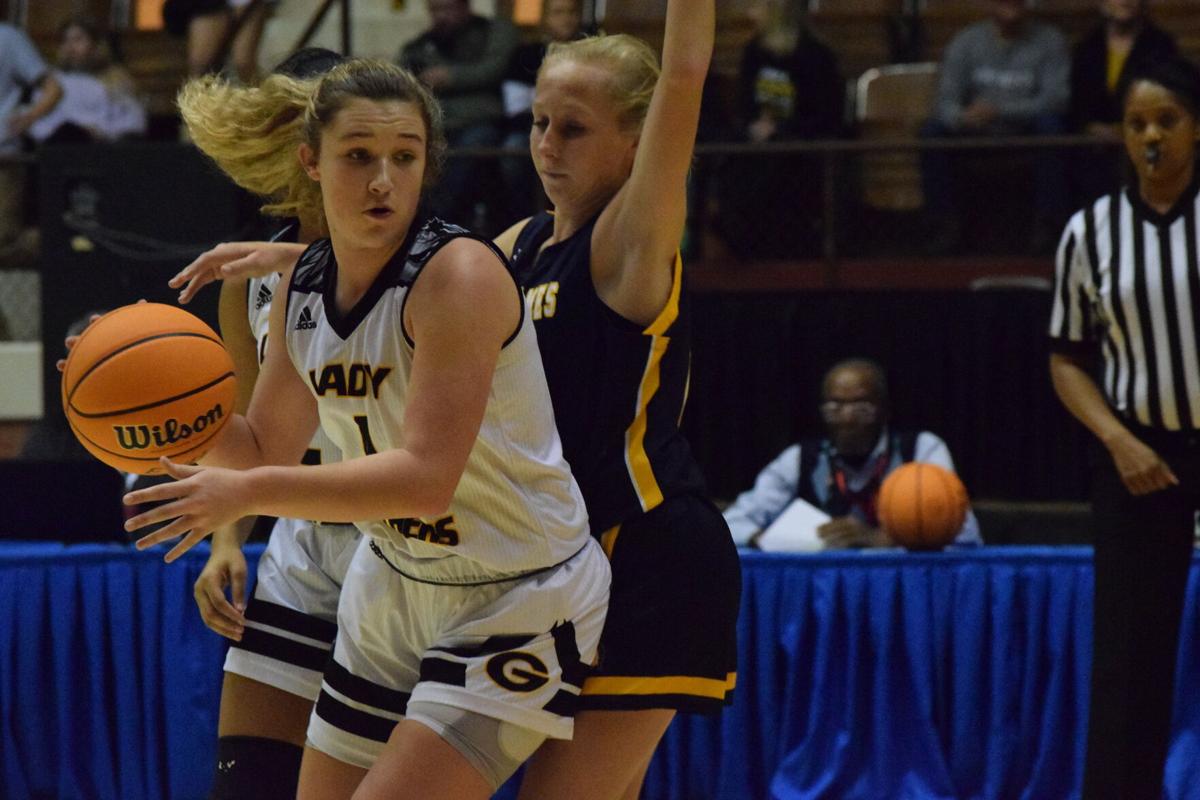 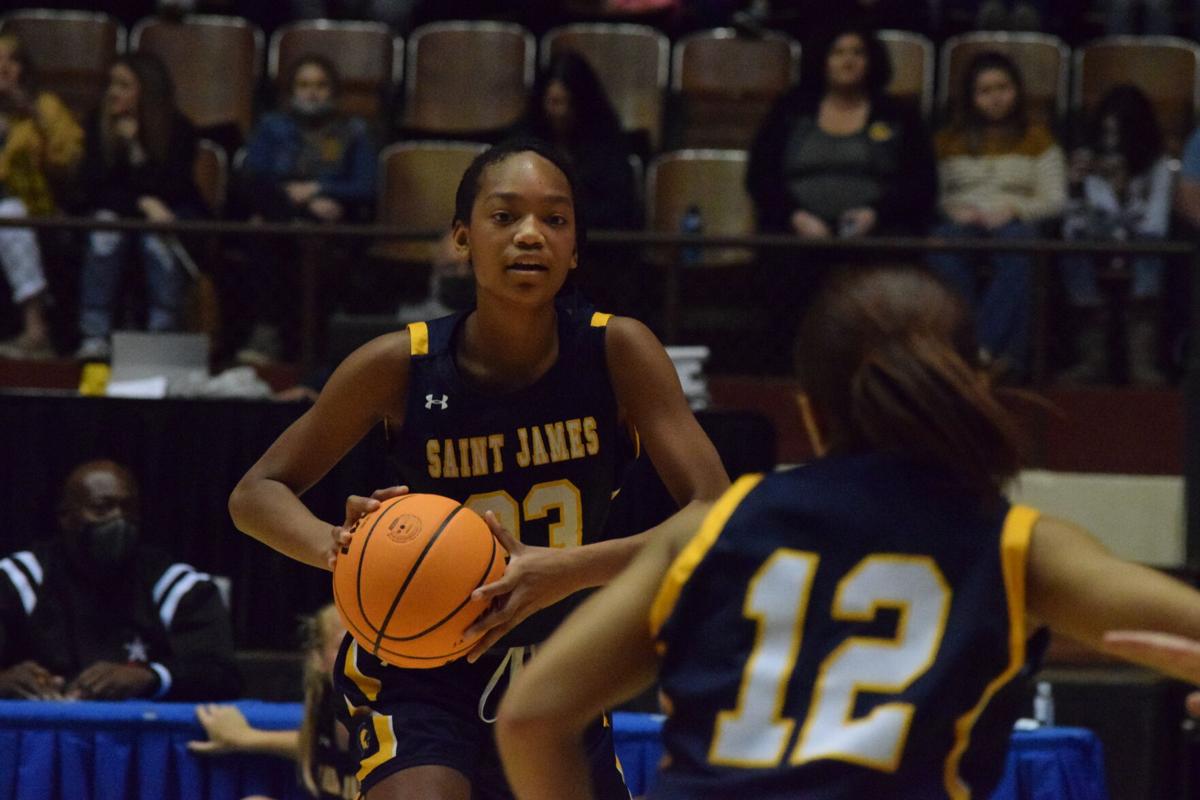 St. James' Ava Card looks for teammate Chelsey Craig (12) in the second half of Monday's game. 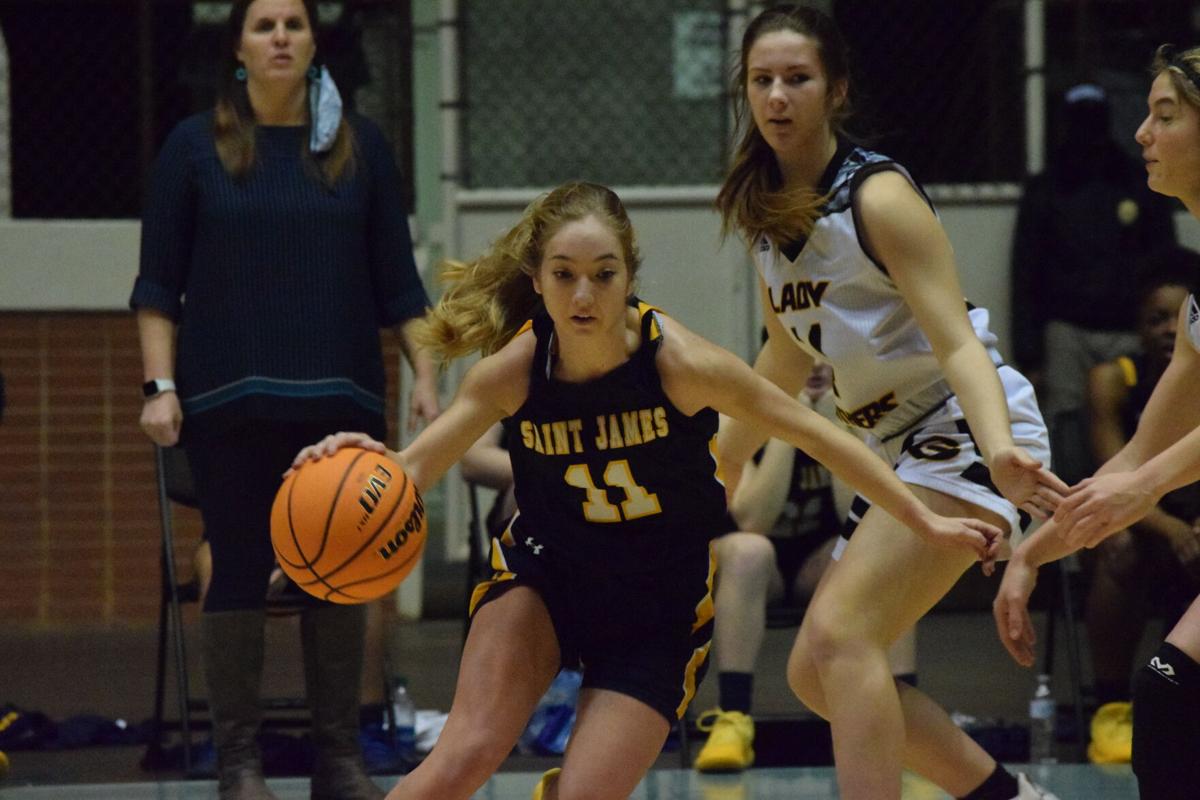 St. James' Hannah Grace Griggs drives into the lane against the Panthers in the second half of Monday's game. 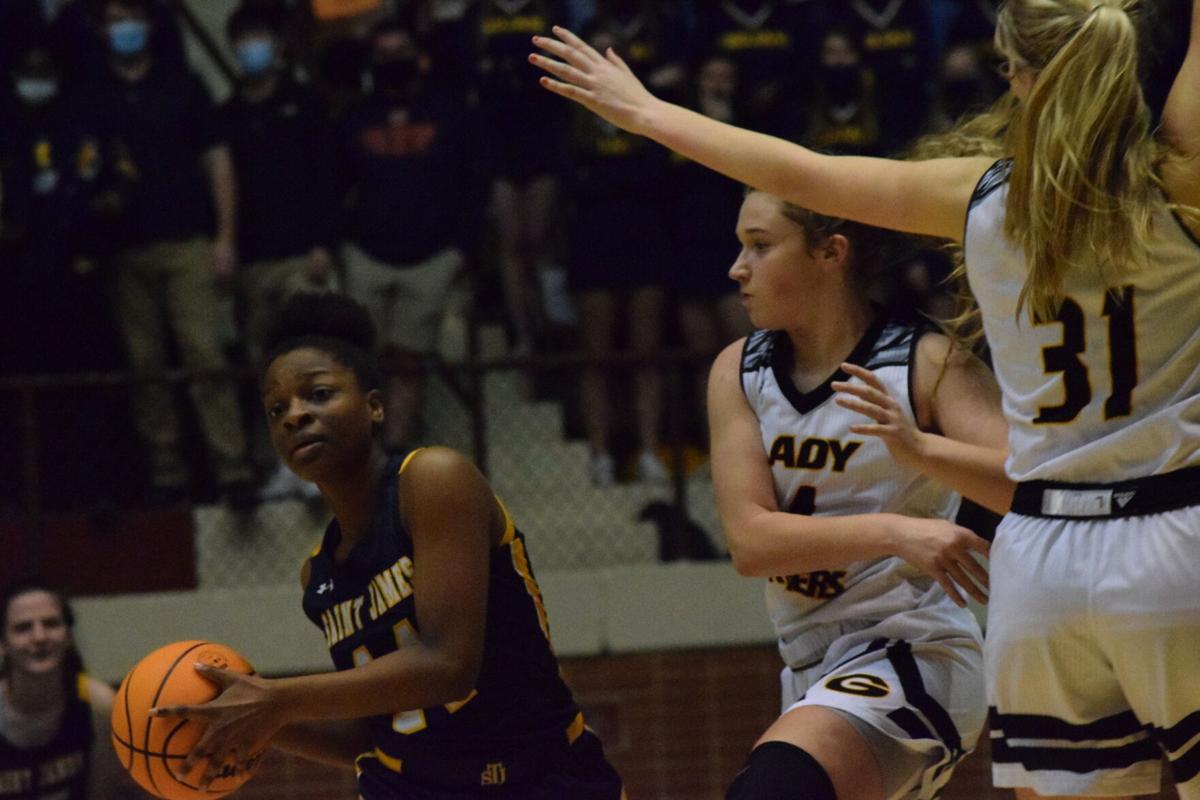 St. James' Quintoria Warren looks for help inside as she is defended by Madison Boswell, Melody Watson (31) in Monday's game.

St. James' Ava Card looks for teammate Chelsey Craig (12) in the second half of Monday's game.

St. James' Hannah Grace Griggs drives into the lane against the Panthers in the second half of Monday's game.

St. James' Quintoria Warren looks for help inside as she is defended by Madison Boswell, Melody Watson (31) in Monday's game.

St. James had overcome a horrible first quarter with a near-perfect second quarter, but the trend didn’t continue in the second half.

Geneva pulled away from a tight game with a 15-4 run in the second half to finish off the Trojans 54-43 in the Southeast Regional 3A finals at Garrett Coliseum on Monday morning.

Geneva (20-7) advances to the 4A semifinals on Friday at Birmingham’s Bill Harris Arena, while St. James ends the season at 19-8.

“There were a few times when we thought we had a good chance (to get to Birmingham), but 3A is tough,” said Geneva coach Richard Bixby, whose team moved up in classification this season after losing in the 3A regionals to Montgomery Academy last year. “Moving up to 4A benefitted us. I just told the girls if we just play and do what we’re supposed to, we have a very good shot at getting to Birmingham.”

And in the first quarter, it looked as if nothing would stop the Panthers, who weren’t that efficient on offense but reaped the benefits of a struggling St. James’ squad to take a 14-0 lead into the second quarter.

“That first quarter was brutal,” St. James coach Katie Barton said. “We were 0 for 13. You could tell the nerves had them. Then we settled down and picked up the energy in the second quarter.”

Just as quickly, the tables turned. Geneva made just one of its 12 shots in the second quarter while the Trojans turned up the intensity on both ends and took a 25-22 lead into the locker room at the half.

“I really can’t answer (what happened),” Bixby said. “Our defense, we weren’t rotating quick enough and they hit some 3s, then we couldn’t hit anything. I told them in the locker room before the game, there are going to be peaks and valleys, you can’t let the low points define the game.”

Barton switched to a zone defense to keep the ball away from Geneva’s 6-foot-3 center, Melody Watson, which seemed to have an effect on the Panthers’ offense.

“Melody is a big part of our game, just because we can cheat a little more to the outside because she’s going to block some shots or alter some shots,” Bixby said. “Everything goes through her, but she doesn’t realize it.”

Watson hit just 2 of 11 shots from the field, but finished with 10 points, nine rebounds and nine blocked shots, giving her team an advantage in all three categories.

“I wasn’t sure I was going to be able to run that (zone in the second half) against them with their height down low,” Barton said. “In the first possession of the second half, they were able to throw that lob in there, so I knew it was coming. So we went ‘man,’ but we just couldn’t get in an offensive flow in the second half.

“Melody hurts us on the boards. And just her size in affecting our shots. We got a little bit better (later in the game) but we weren’t as disciplined as we needed to be in pump faking her, or when she comes over, finding the weakside help.”

Later in the game, it was the Panthers’ transition game that decided the outcome. St. James wasn’t going to shoot its way back into the game -- the Trojans were 6 of 25 from the field in the second half and 0 for 3 on 3 pointers in the fourth quarter -- but compounded the problem with five turnovers in the third quarter and seven more in the fourth, often leading to layups on the other end of the floor.

“What really killed us was we got really stagnant (on offense) in the fourth and gave up too many transition points,” Barton said.

Pazley Lamb led Geneva with 15 points, followed by Brooklyn Kemmerlin with 13, Madison Johnson with 11 and Watson with 10.

Despite the loss, Barton was proud of a squad that struggled to score points early in the year, but continued to improve despite the loss of eight games in January for COVID-19.

“This experience is going to help them going into next year,” she said. “We really pulled together in the second half of the season, found our identity and figured out who our go-to players are and how to get them the ball where they can score. I feel like we deserved to be here. But we’re still trying to find who we are.”

The Trojans will replace two senior starters and five overall, but the bulk of the scoring returns in 2022.

“I feel like I’ve got a solid group coming back, a group of girls that really love basketball,” she said. “I would have loved to have gone one more game or even two more games, but this is a great experience for them to come play in this environment.”