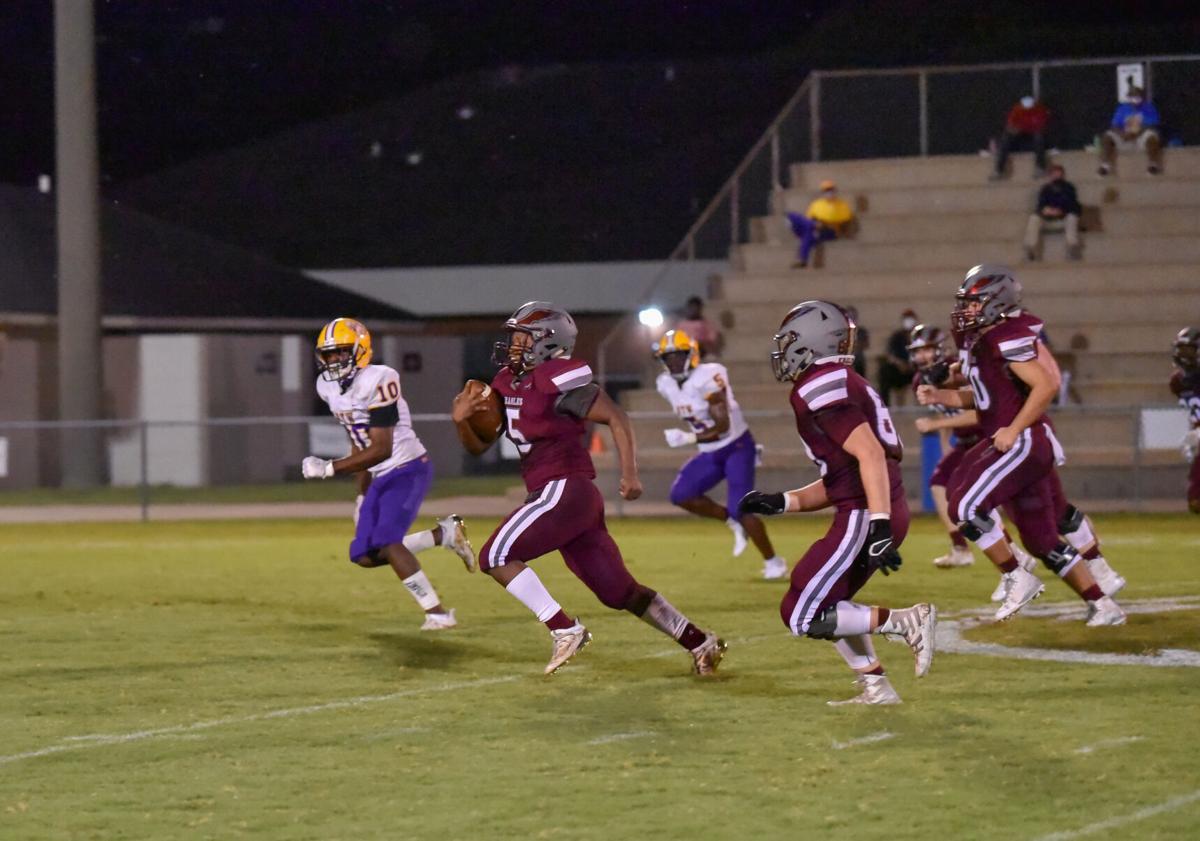 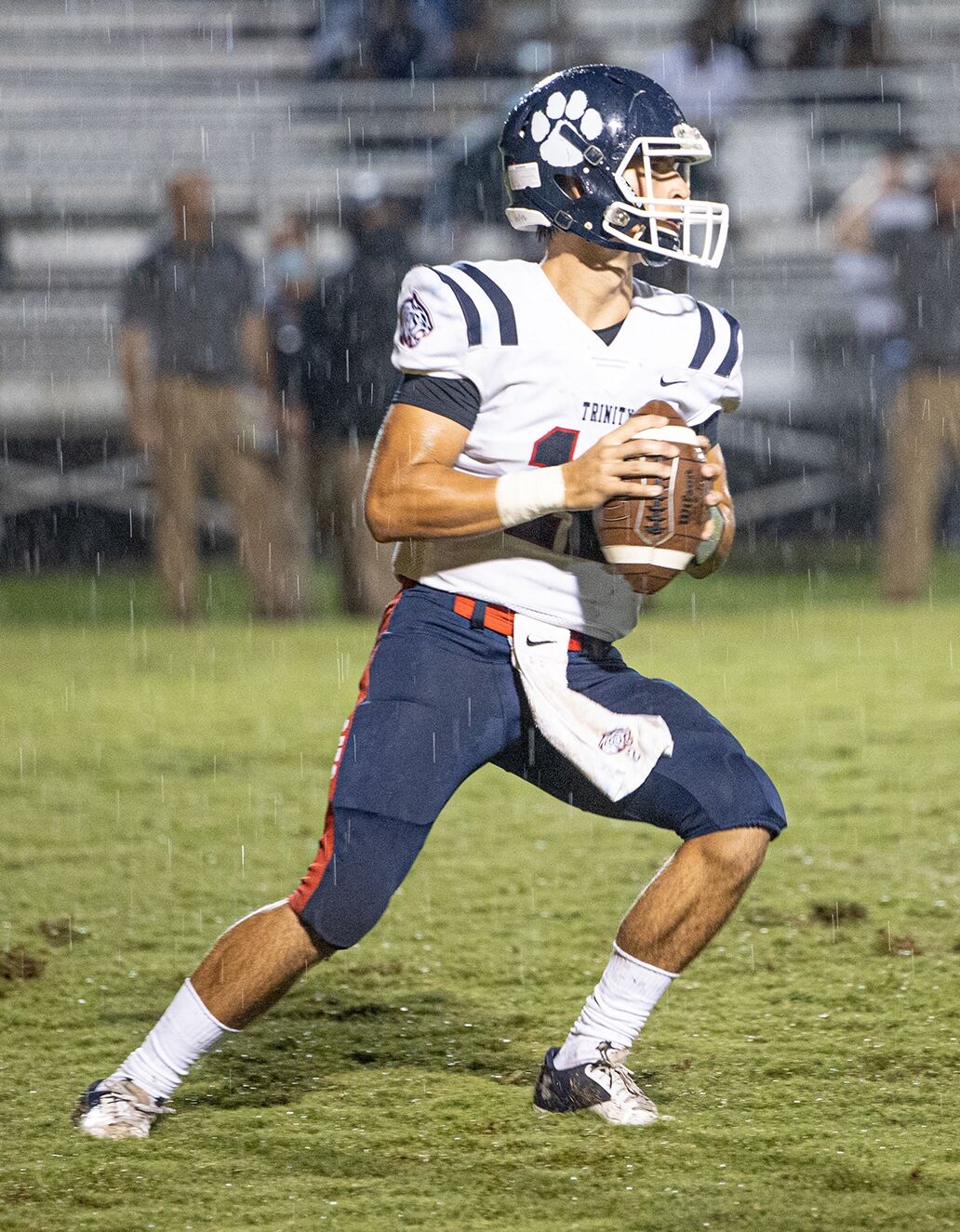 For the second week in a row, Trinity QB John David Bonner completed every pass he attempted

For the second week in a row, Trinity QB John David Bonner completed every pass he attempted

Jalen Clark ran for three touchdowns and Corey Landers added two more as Alabama Christian rebounded from an unexpected week off with a 35-6 win over BTW in the 4A Region 2 opener for the Eagles.

Booker T. Washington (0-3, 0-2 in region play) opened the season with a 1-0 forfeit loss because of coronavirus, but ACA avoided the same fate by moving last week’s game with St. James to Sept. 25.

Clark, who finished with 62 yards on eight carries, added a 51-yard run in the third quarter to make it 35-0. Landers finished with 54 yards on six carries and added a reception for 45 yards.

REELTOWN – Caleb McCreary threw for a pair of touchdowns and Jeremiah Cobb ran for two more as Catholic pulled away from Reeltown in a 3A Region 4 game at Nix-Webster-O’Neal Stadium on Friday.

McCreary was 14 of 21 for 252 yards, including a 39-yard touchdown pass to DJ Carter four minutes into the game to help the Knights rally from a 6-0 deficit. The Knights added three more scores in the second quarter, scoring on a TJ Dudley 4-yard run out of Wildcat formation, a 20-yard run by Cobb and a 34-yard touchdown pass from McCreary to Myles Butler to give Catholic a 28-6 lead at the half.

Cobb, who finished with 134 yards on 13 carries, added a 1-yard run midway through the third quarter after the Rebels had scored to cut into the lead.

“I’m really proud of how our group continues to play tough football,” Catholic coach Aubrey Blackwell said. “It was a physical game tonight and we had adversity to overcome all around us. Caleb McCreary did a great job of getting the ball to Myles and DJ with some big plays in the second quarter. Jeremiah Cobb helped us control the clock with some relentless effort in the second half.”

Carter finished with 94 yards on three receptions and 73 more on three returns. Butler had 79 yards on five catches.

Defensively, Dudley had 11 tackles, followed by Pat Ryan with nine.

“(Reeltown) Coach Matt Johnson does a great job and his guys played their hearts out tonight for him and never quit,” Blackwell said. “I’m proud that our guys went on the road for the third time in four games and played great defense and didn’t allow the noise and distractions take us off task. Our defense made some big stops at critical times and played tough football tonight.”

BEULAH – Trinity spotted Beulah an early touchdown, then scored 50 unanswered points to improve to 2-0 in region play heading into next week’s region matchup at home with Pike County.

A 13-yard scoop and score by Coleman Ellis on a Beulah fumble broke a 7-7 tie and the Wildcats added four more touchdowns in the first half to take a 43-7 lead into the locker room at the half.

Coleman Stanley scored on a quarterback keeper, John David Bonner threw a touchdown pass to Jake Hufham and Chase Letner added a touchdown run with 4:16 remaining in the first half as Trinity took a 43-7 lead.

John David Bonner, for the second consecutive week, completed every pass he threw, going 8 for 8 on Friday for 160 yards and a pair of touchdowns. Hufham had 96 yards and a touchdown on four receptions and William Roberson added a 16-yard scoring reception on his only catch of the night.

BILLINGSLEY – For a half, Billingsley looked up to the task of taking on the Red Devils.

Levi Arington threw a touchdown pass to Devin Blackmon and ran for another score as the Bears trailed their arch rivals by just five points, 19-14, at the half.

The second half was all Maplesville as the visitors scored 32 unanswered points to record their 15th consecutive victory in the series.

Billingsley (2-2, 0-2 in region play) travels to Notasulga for a region game next week.

The Eagles remain unbeaten at 4-0 and undefeated in 3A Region 3 play after Southside forfeited their game, citing coronavirus issues.

Montgomery Academy will play host to Prattville Christian in a region game next Friday.

TALLASSEE – Maleek Pope rushed for 194 yards and four touchdowns on 17 carries as the Aggies kept Tallassee winless with a strong third-quarter performance at J.E. “Hot” O’Brien Stadium on Friday night.

Tallassee rolled up 336 yards in the loss, including 198 rushing yards and a pair of touchdowns from Jalyn Daniels as Tallassee (0-3, 0-1 in region play) dropped to 0-3 for the first time since 2011.

Pope started the scoring with a 12-yard run midway through the first quarter, but Daniels answered seconds later with a 55-yard run to tie the game at 6-6. Pope added another 12-yard scoring run in the second quarter as the Aggies took a 21-14 lead into the locker room at the half, then pulled away in the third quarter.

Tallassee will travel to Eclectic for a region contest next Friday.

PRATTVILLE -- Kenny Gunn had 100 yards on 24 carries, but the Panthers couldn’t keep Hale County out of the end zone in a 43-20 defeat on Friday night.

Prattville Christian (1-3, 0-2 in region play) will travel to Montgomery Academy next Friday.