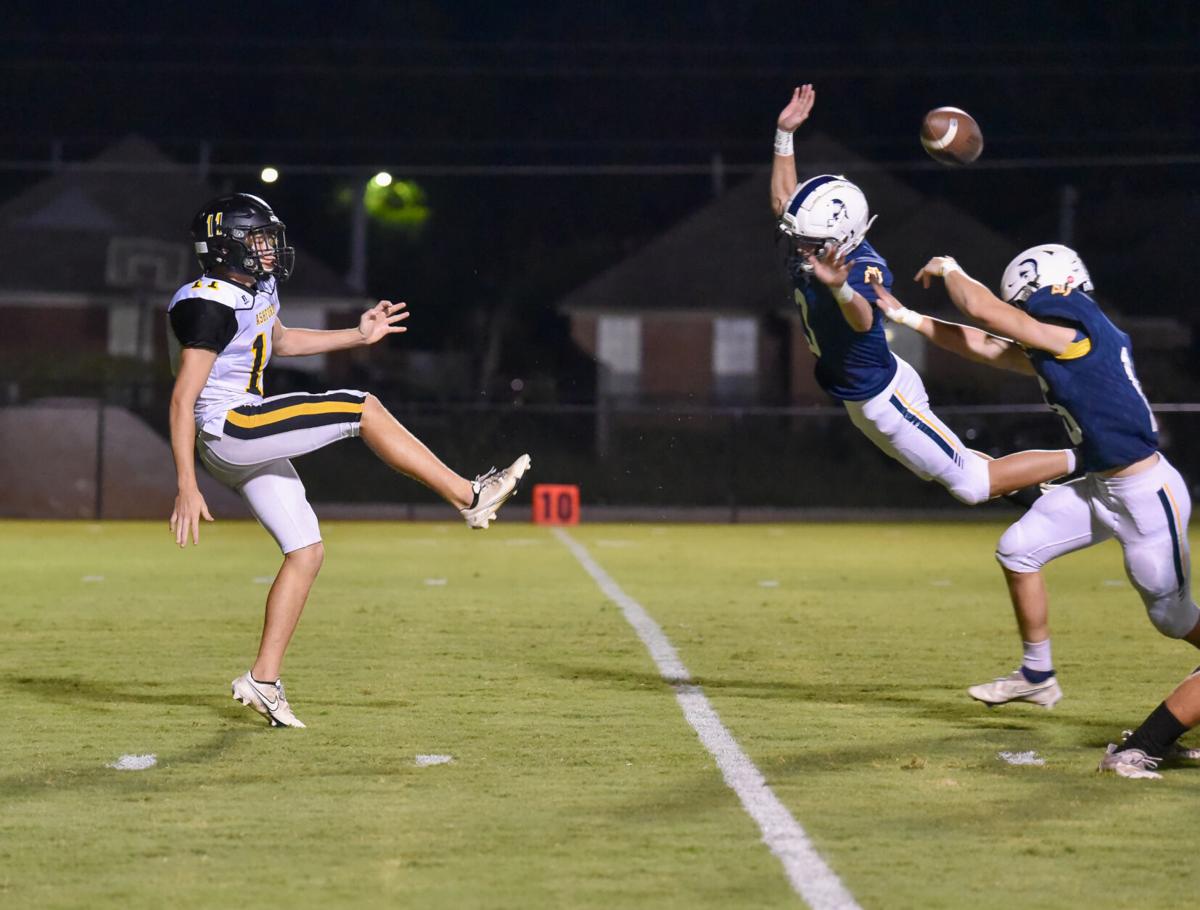 Jake Huff and Pruitt Conner combine on a punt block against Ashford in Friday's game. 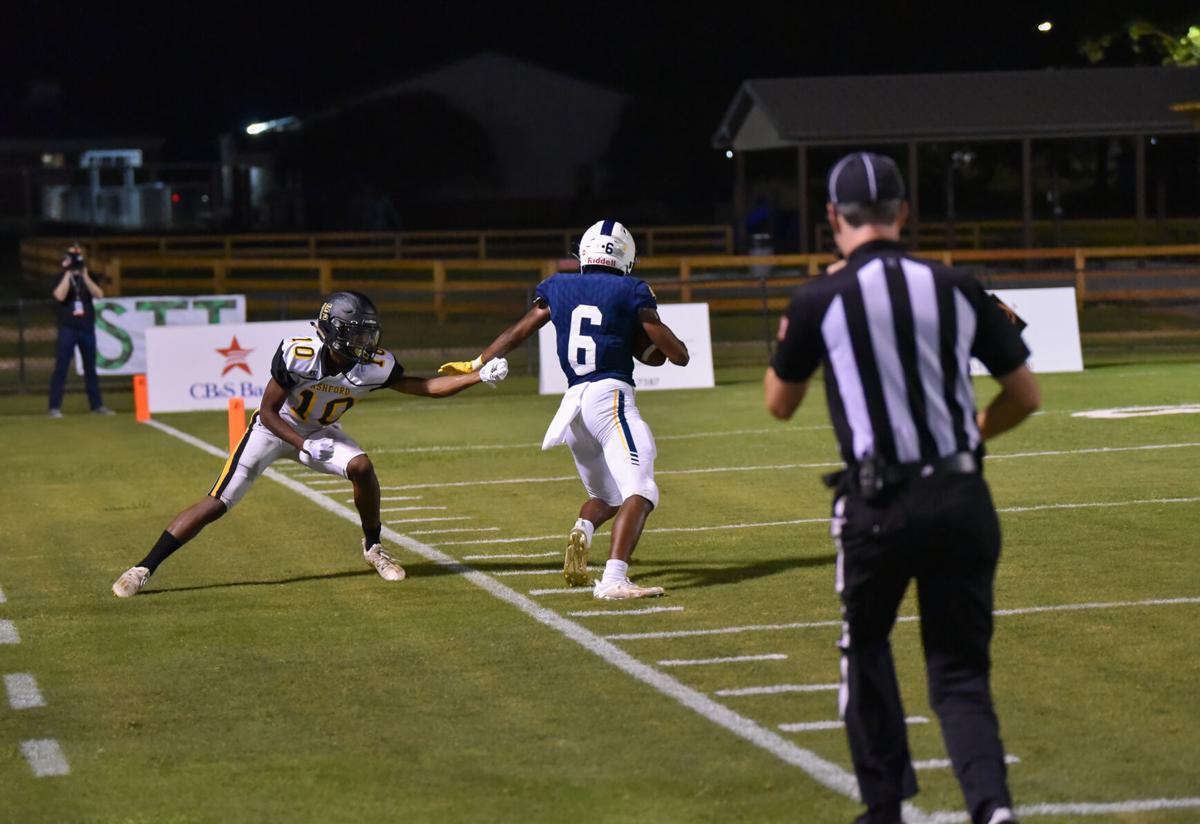 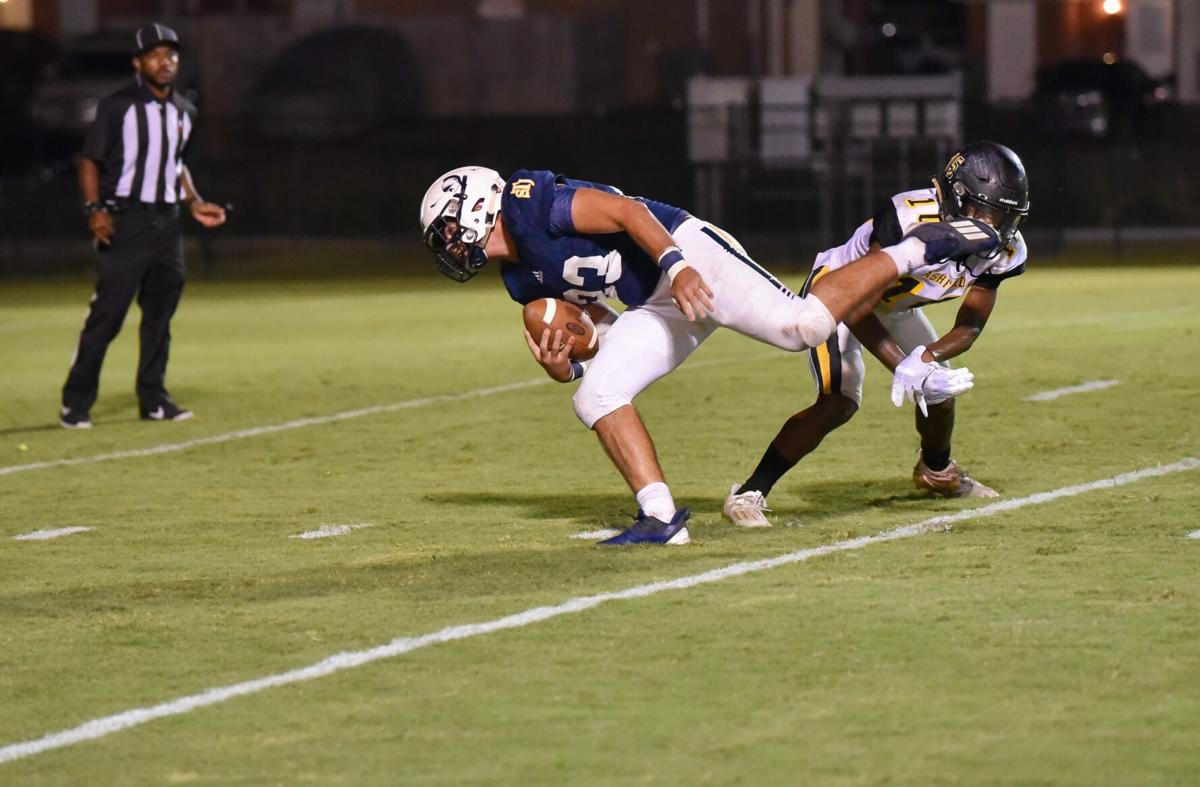 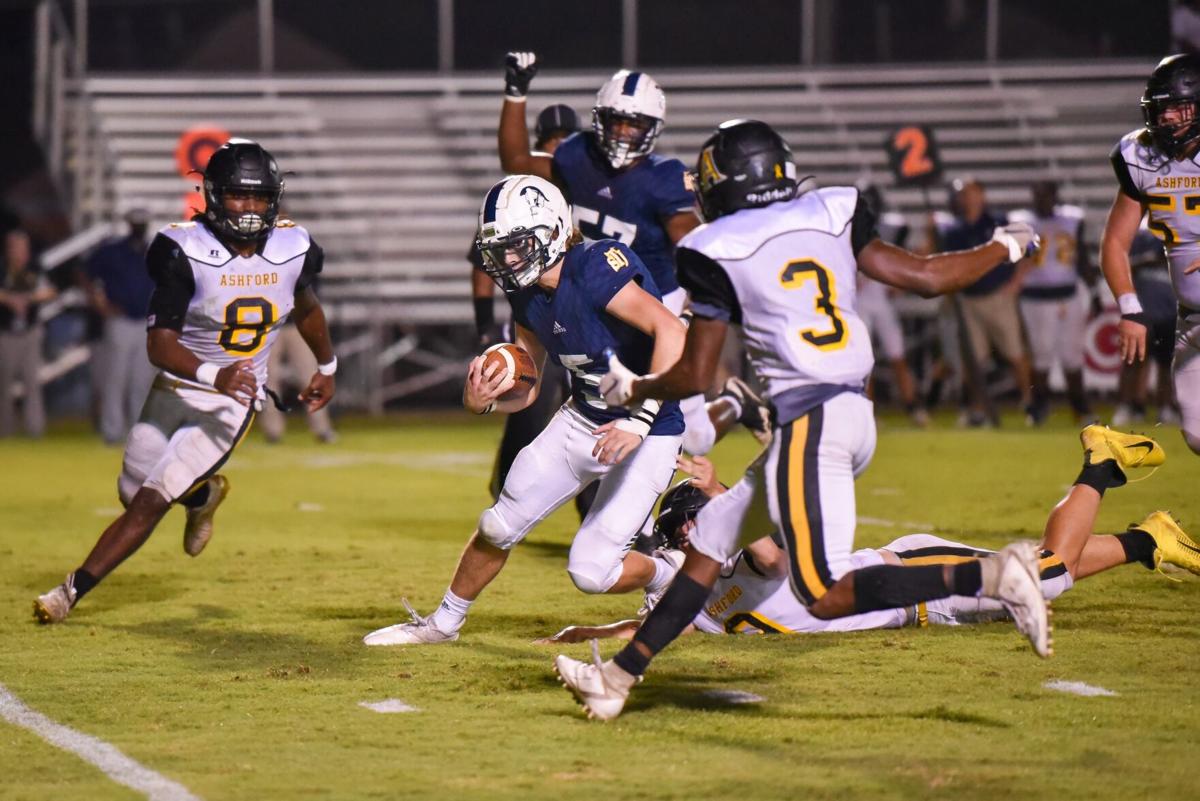 Cosner Harrison scored a pair of touchdowns in limited playing time against Ashford on Friday. 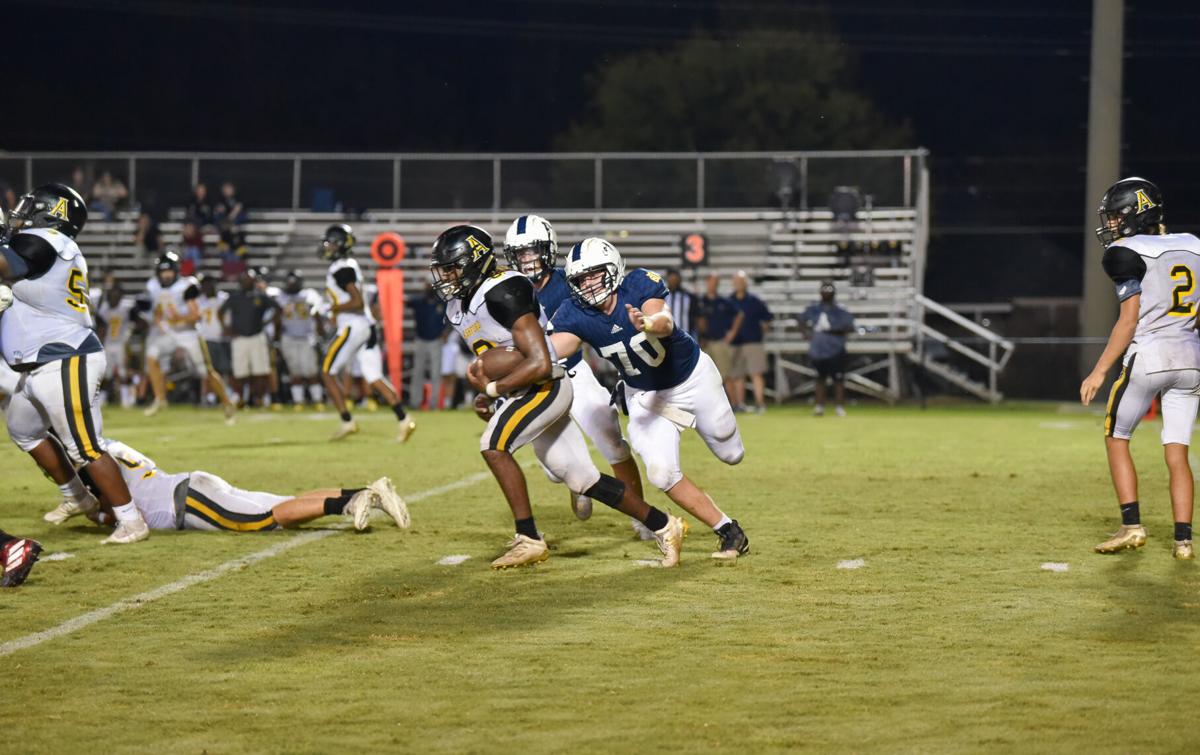 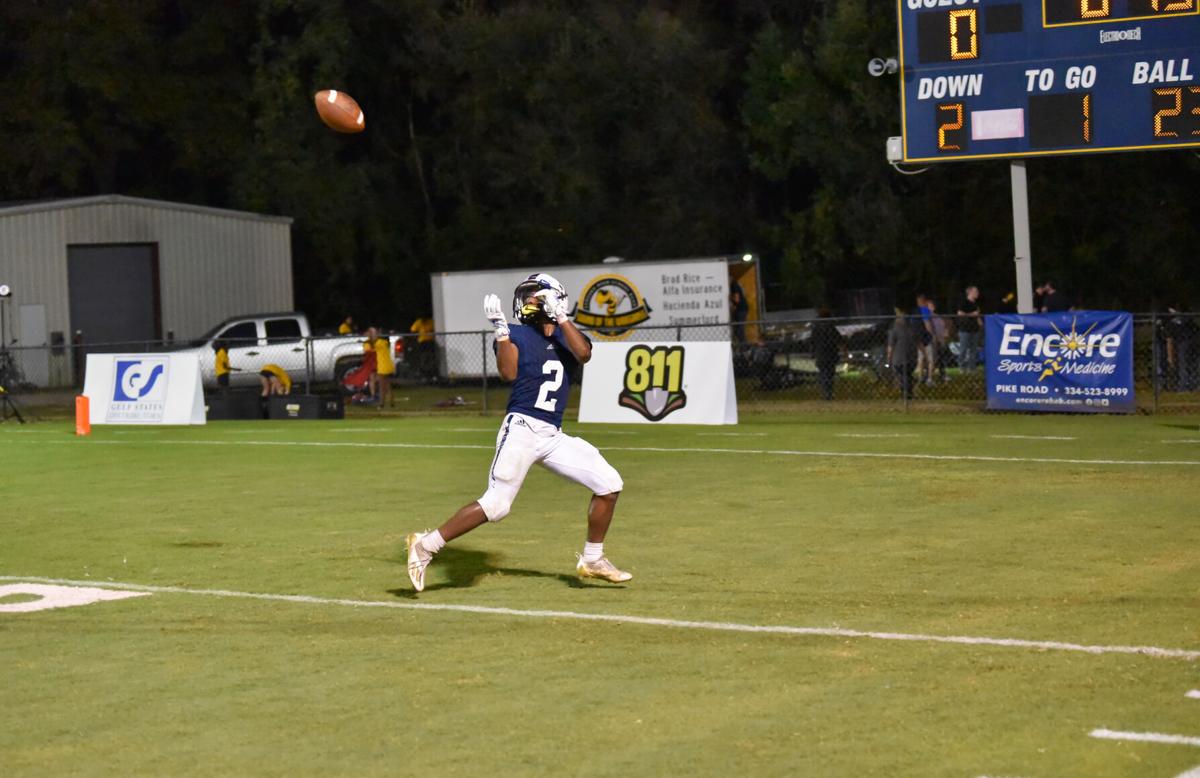 Ethan Beard hauls in a touchdown pass from K.J. Jackson against Ashford. 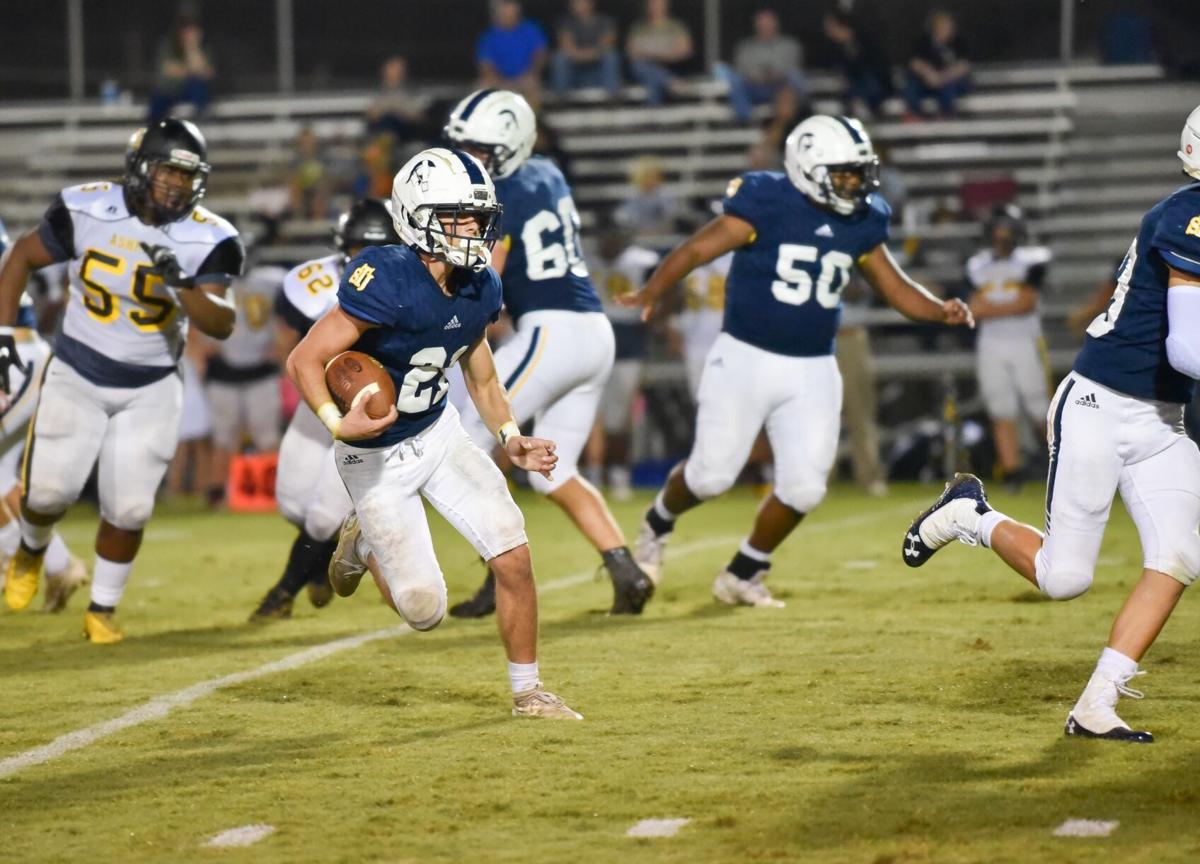 Reserve running back Cole Anderson saw some second-half action against Ashford on Friday. 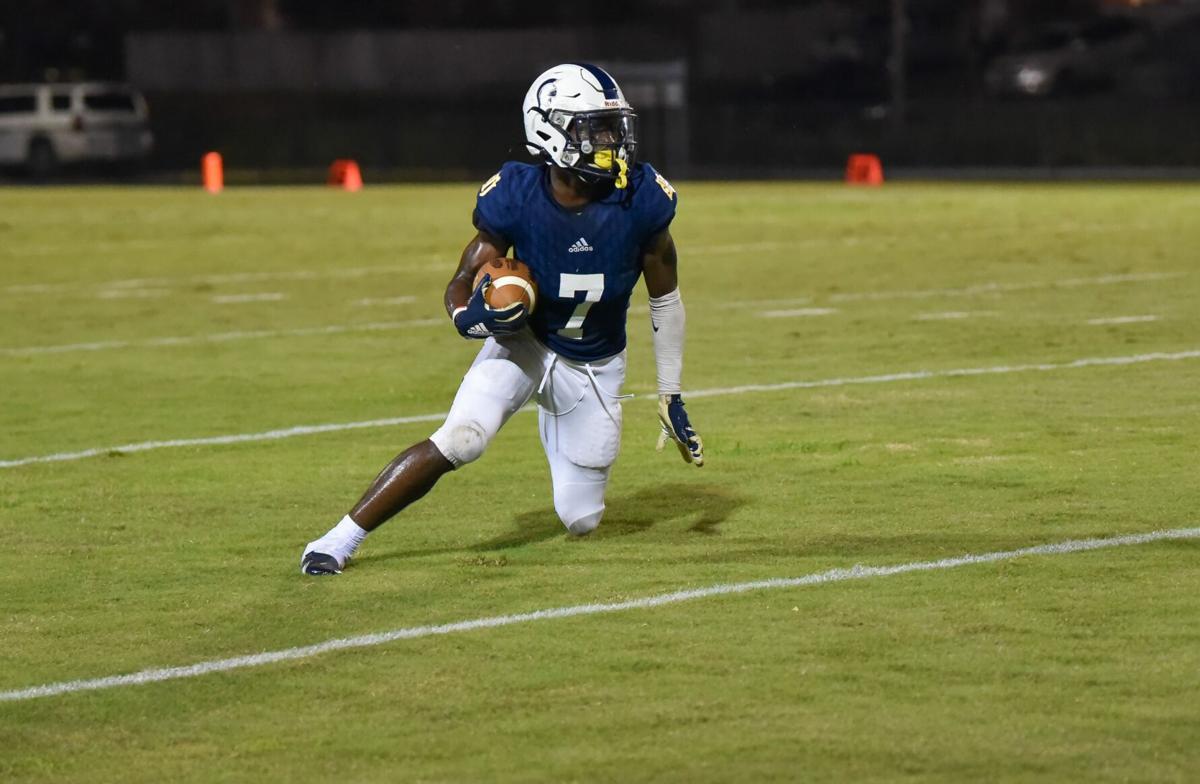 Jake Huff and Pruitt Conner combine on a punt block against Ashford in Friday's game.

Cosner Harrison scored a pair of touchdowns in limited playing time against Ashford on Friday.

Ethan Beard hauls in a touchdown pass from K.J. Jackson against Ashford.

Reserve running back Cole Anderson saw some second-half action against Ashford on Friday.

Saint James clinched the 4A Region 2 championship with their seventh consecutive win, a 35-8 defeat of the Yellow Jackets in a game which was shortened to 36 minutes with six-minute, second-half quarters and only lasted 91 minutes.

K.J. Jackson threw touchdown passes of 37, 31 and 23 yards, completing 5 of 6 passes for 120 yards, and ran six yards for another touchdown.

Cosner Harrison rushed for 85 yards on only 10 carries and scored touchdowns on runs of 5 and 3 yards.

Jake Huff converted all 5 of his extra point attempts.

Saint James ran only 31 plays in the shortened game and made 17 first downs.

The Trojans (7-1) travel to Geneva next week to conclude regional play before hosting Trinity in two weeks and a playoff game in three weeks.

Montgomery Academy (6-2) won back-to-back region titles for the first time since 2014-15, rallying from a deficit twice to defeat the Tigers in a battle of region unbeatens for the second consecutive year.

Jamal Cooper rushed for 66 yards and added 10 receiving yards, but it was his 36-yard halfback pass to Alex Kohn that rallied the Eagles from a 7-0 second-quarter deficit.

In the third quarter, Montgomery Academy fell behind again but Jashawn Cooper, who finished with 118 rushing yards, scored on a 17-yard run to tie the game again at 14-14.

Bassett had just 51 rushing yards, but his touchdown runs of 6 and 14 yards gave the Eagles a cushion in the fourth quarter. Montgomery Academy took a safety in the final minute for the final points of the game.

ANDALUSIA -- Straughn scored on a 3-yard run with 94 seconds remaining to give the Tigers a 19-17 upset of Alabama Christian Academy on Friday night.

A win would have clinched home-field advantage for the Eagles in the first round of the playoffs, but now ACA, Geneva and Straughn are all tied for second place in the region at 4-2.

ACA (5-3) got on the scoreboard first with a 23-yard field goal by Tyson Summers with 4:19 left in the first quarter, but the Tigers countered with a touchdown pass early in the second quarter to take a 7-3 lead. The Eagles took a 9-7 lead two minutes into the second half with a 28-yard touchdown pass from Hayes Hunt to Avery Stuart, but once again the Tigers answered with a long touchdown run to reclaim the lead.

Corey Landers scored on a 2-yard run with 9:34 remaining in the game and added the two-point conversion run for a 17-13 lead but couldn’t find any points the remainder of the game.

Hunt completed 11 of 19 passes for 129 yards and a touchdown, with Stuart on the receiving end of three passes for 75 yards and Preston Hicks adding three receptions for 22 yards.

Landers rushed for 64 yards and a touchdown on 13 carries.

The Eagles return home to play Bullock County in a 4A Region 2 game next week before traveling to Montgomery Academy to close out the regular season on Oct. 28.

Tacaris Bozeman continued his dominance of MPS football with another 100-plus yard performance on Friday.

But it was four carries in the final minutes of a 12-6 victory over G.W. Carver that lifted the Poets to their most important win of the season Friday at Cramton Bowl.

Bozeman rushed for 152 yards on 35 carries and scored a touchdown to lead the Poets to the win over their arch-rival and clinch a second seed in Class 6A, Region 2, which means a home game for the first round of the playoffs.

Of the 35 carries, the biggest came in the final minutes of the game with Lanier clinging to the six-point lead. After Carver was stopped on a drive deep in Lanier territory, Bozeman had carries of 2, 4, 5 and 4 yards to move the first-down chains and he added a 15-yard run that all but ran out the clock.

His touchdown came with 2:50 to play in the third quarter on a 12-yard scamper.

The Poets had taken a 6-0 lead in the final seconds of the first half on an acrobatic catch in the back of the end zone by Jamarcus Hamilton on a Braylon Jones pass of 29 yards.

After Bozeman scored in the third, Carver finally got on the board on a Jamar Green quarterback sneak on a fourth-down play with 7:56 left in the game.

Neither team was able to convert an extra point try.

Green led the Wolverines with 52 yards passing and 88 yards rushing.

Jones added 63 yards rushing for the Poets, who improved to 8-1 and 5-1 in region play. The eight wins is the most at this point of the season since 2017.

HOLTVILLE – The Tigers held off a late rally by the Bulldogs to earn an important Class 5A, Region 4 win on Friday.

Tallassee held a 21-7 lead over the Bulldogs through three quarters but Holtville rallied for a touchdown with just over seven minutes left in the game on a Shawn Brackett touchdown run.

In the final minute of the game, Holtville drove to the Tallassee 2-yard line but was held out of the end zone by the Tallassee defense with the last pass attempt on the last play coming up empty.

The Tigers built their lead on a first-quarter touchdown from Jalyn Daniels. After Holtville tied the game on a touchdown pass from Dalton Yarroch to Michael Forney, Tallassee took the lead into halftime on Tyler Ellis’ 6-yard run for a 14-7 lead.

Ellis added a second score with 40 seconds to go in the third quarter before Holtville began its comeback.

Both offenses were held under 200 yards for the game with Tallassee tallying 196 yards while Holtville managed just 162 yards.

The Panthers were unable to break their losing streak at Beauregard on Friday.

Despite rushing for 168 yards and a TD along with 111 yards passing by Peyton Stephenson, the Panthers stayed winless.

The Hornets scored 21 first-quarter points before Stephenson broke off a 74 yard run for a score in the second period. He added a touchdown pass to Brian Autrey in the third quarter.

The Panthers (0-8, 0-5 Class 5A, Region 4) will attempt to earn their first win next Friday against another winless team, Talladega.

MILLBROOK – Mac Turner’s 11-yard run for a touchdown with 34 seconds left in the game allowed Helena to stay perfect on the season.

The Mustangs had taken a 15-14 lead on Antonio Trone’s 1-yard plunge followed by a made two-point conversion with 4:48 to play in the game.

Turner also ended the Mustangs’ hopes in the final seconds with an interception.

Trone finished with 127 yards and two touchdowns to lead Stanhope Elmore (4-4, 2-3), which will face arch-rival Wetumpka next week with the winner gaining the fourth and final playoff berth in Class 6A, Region 3.

Helena has already clinched the region title and will play UMS-Wright in two weeks.

CALERA – Stone Minnifield scored twice and Nathan Rogers added a 50-yard run for a score but it wasn’t enough as the Eagles earned their fifth win of the season.

The Indians drove to the Calera 22-yard line in the finals seconds but was unable to score the go-ahead touchdown.

Rogers had 169 yards rushing and also threw a touchdown pass to P.J. Merkerson.

The Indians (4-5, 2-3) will need a victory over Stanhope Elmore next week for a berth in the playoffs.