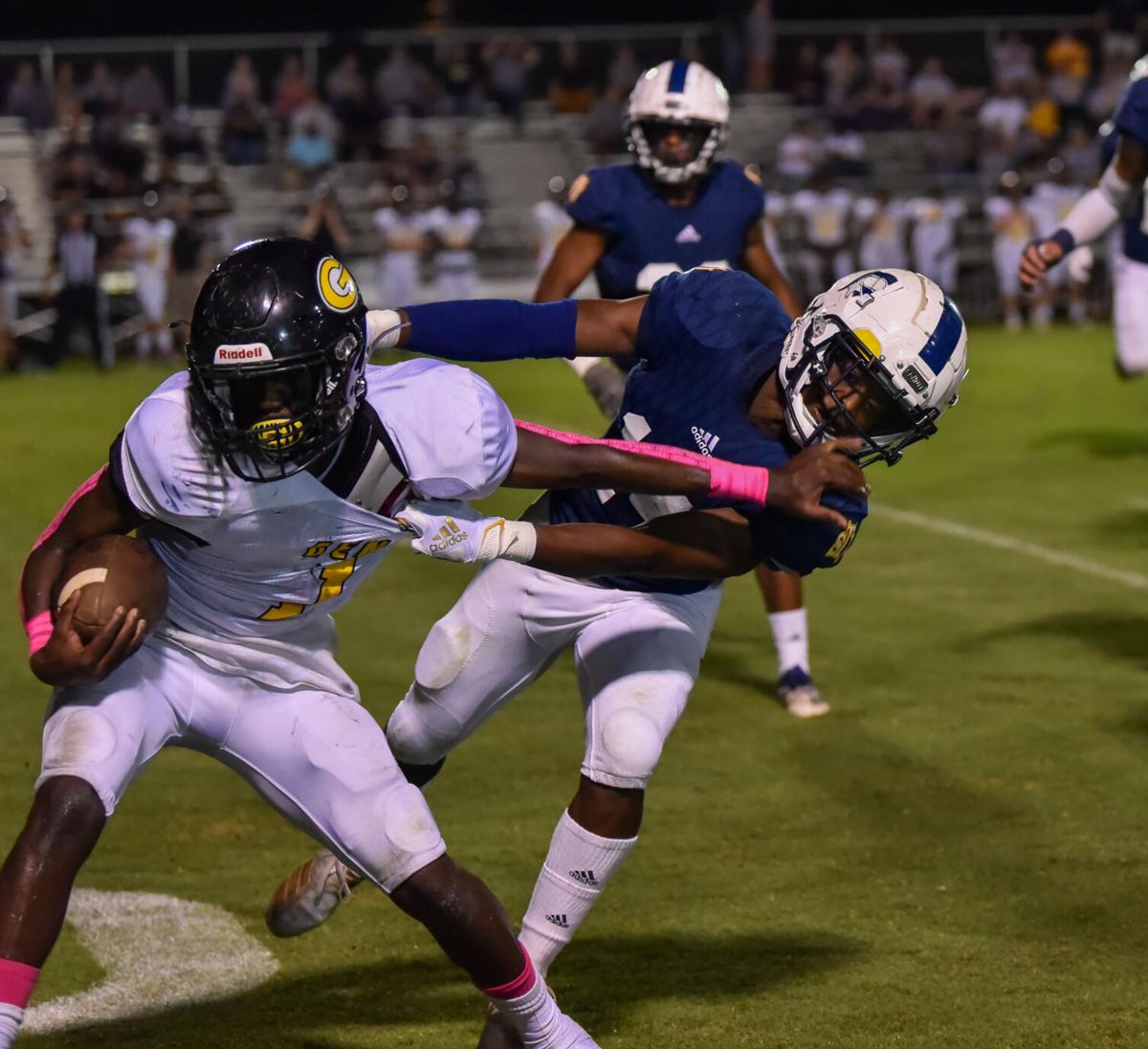 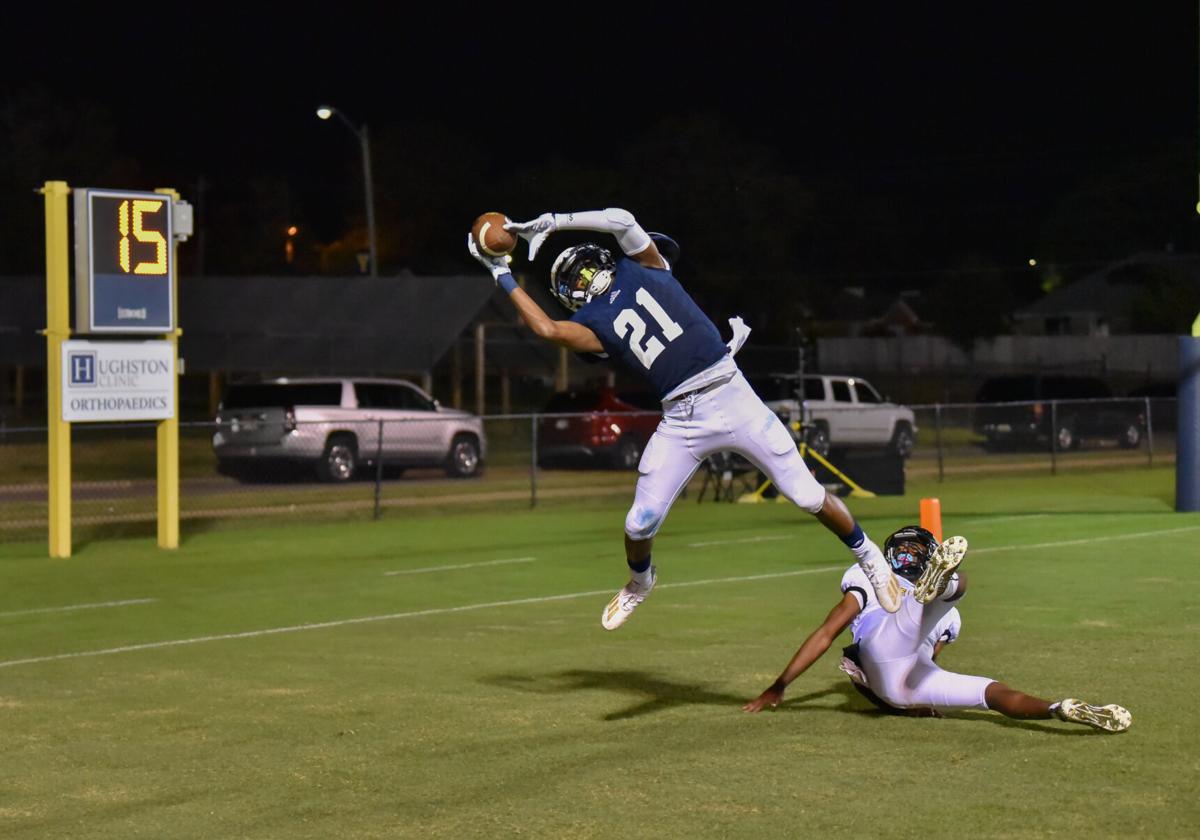 St. James' receiver Bradley Thomas makes a leaping reception in the end zone, but it was negated by a penalty against the Trojans. 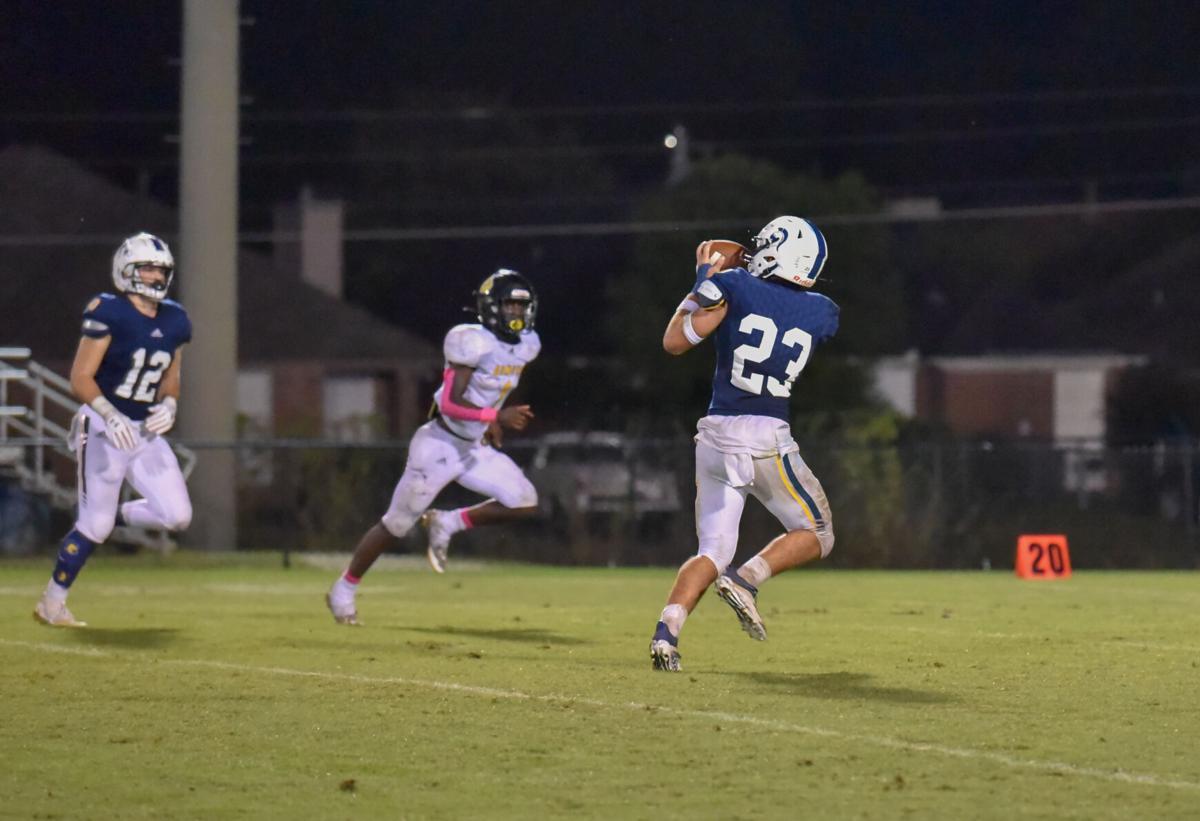 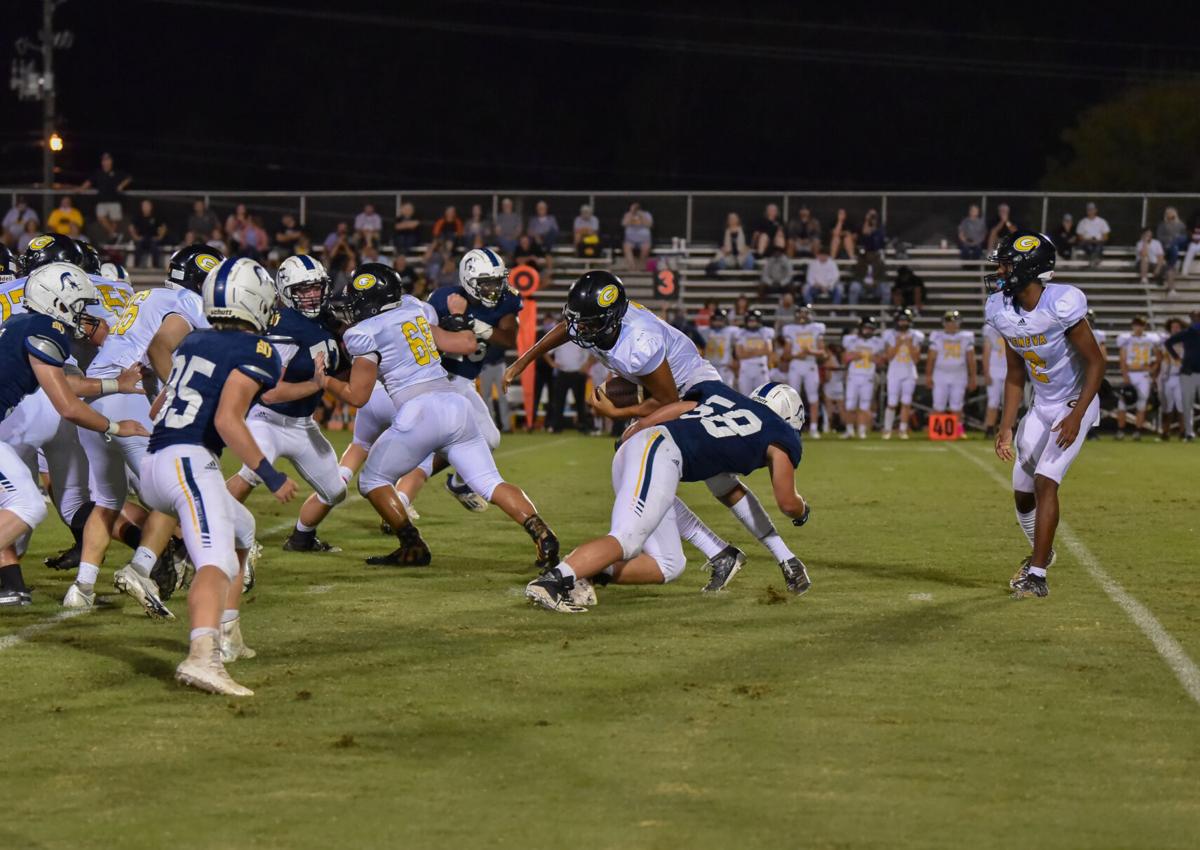 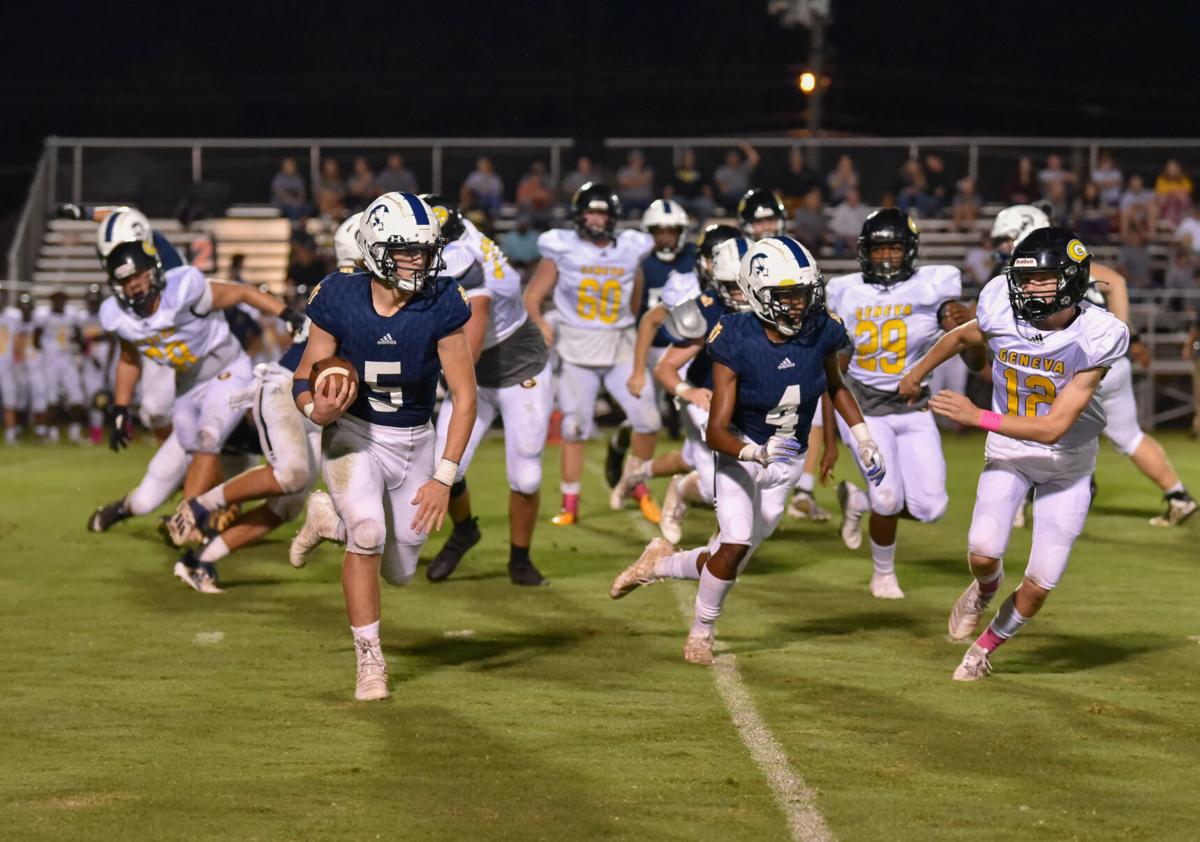 Cosner Harrison looks for running room against the Panthers on Friday night. 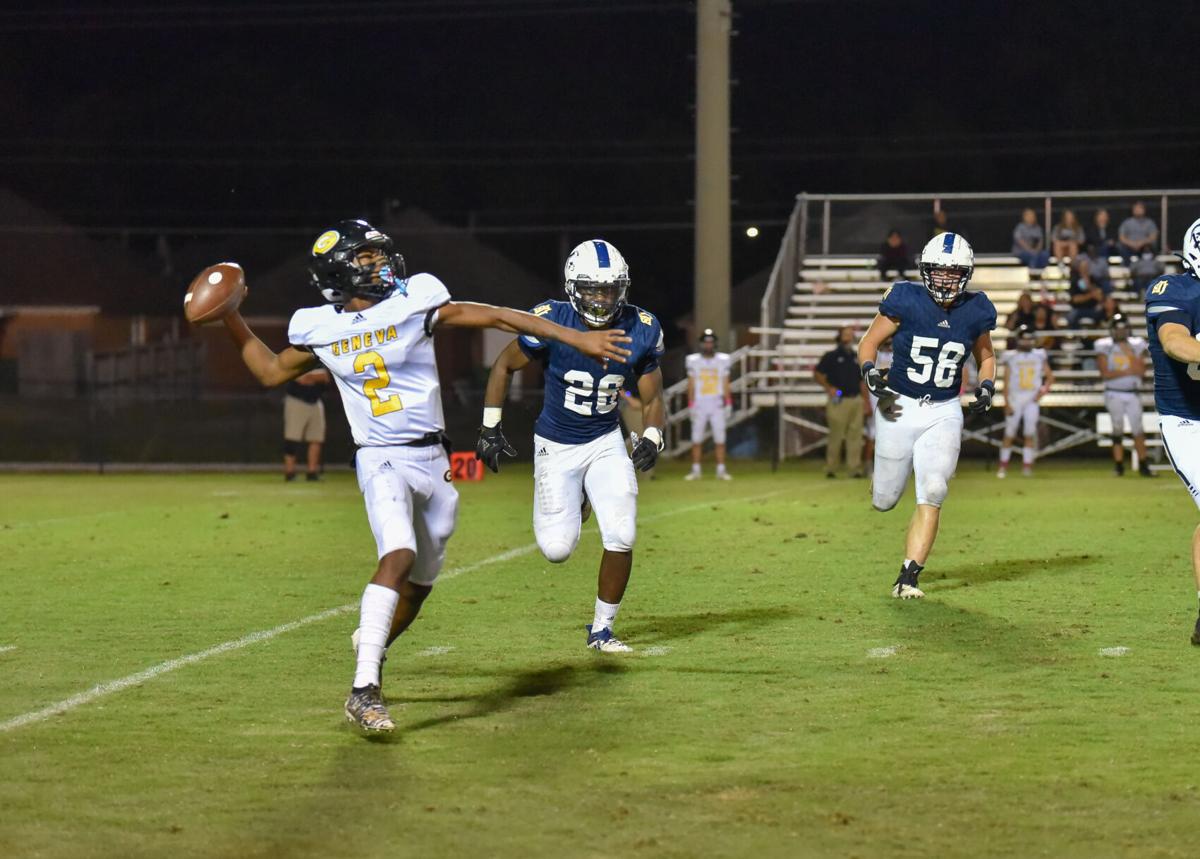 Geneva quarterback Damion Kemmerlin rolls out with the Trojan defense in pursuit. 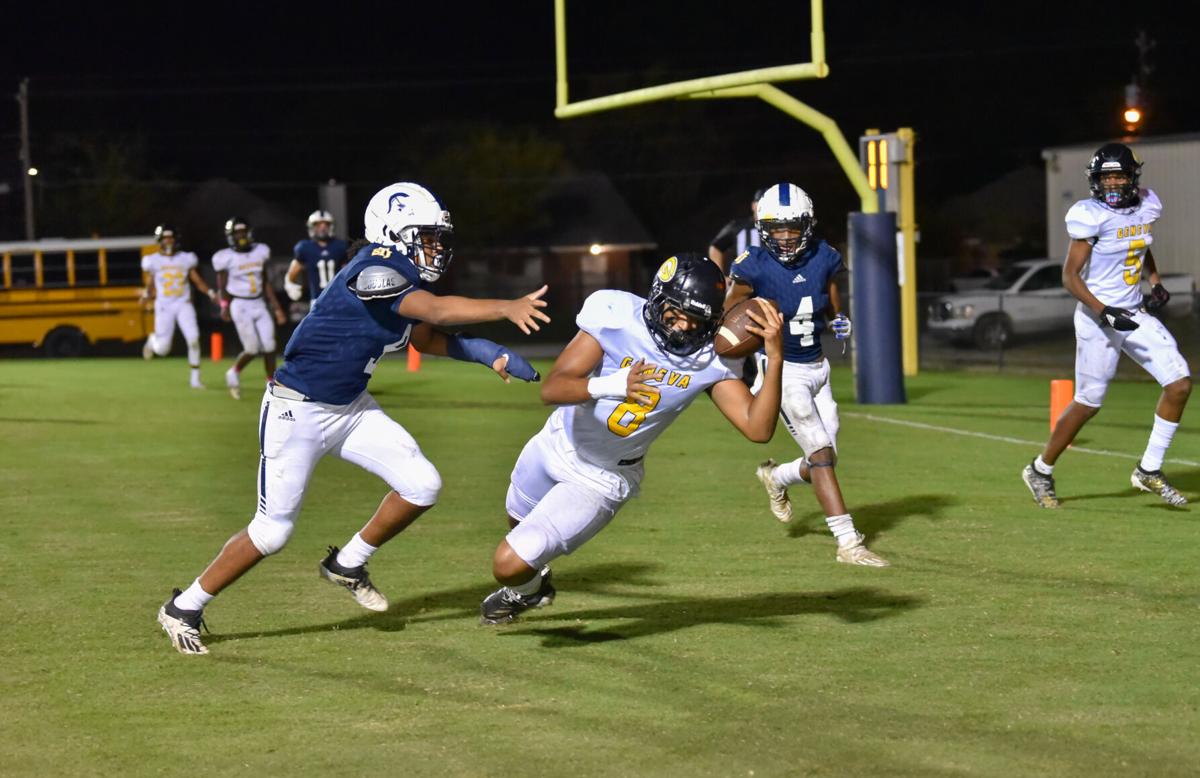 St. James' Malik Melton gets a hand on the ball, deflecting a touchdown away from Geneva's Noah Johnson. 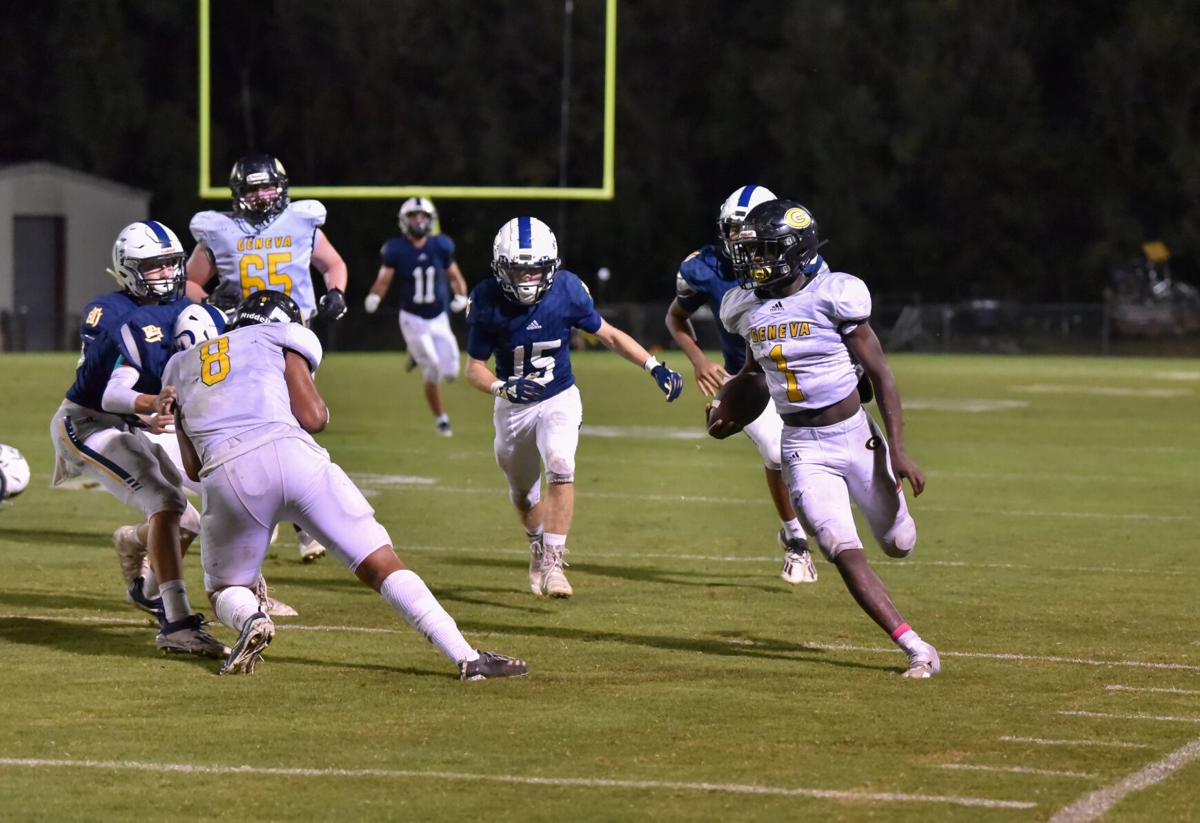 Geneva's Tim McReynolds heads down the sideline for a big gain in Friday's game against St. James. 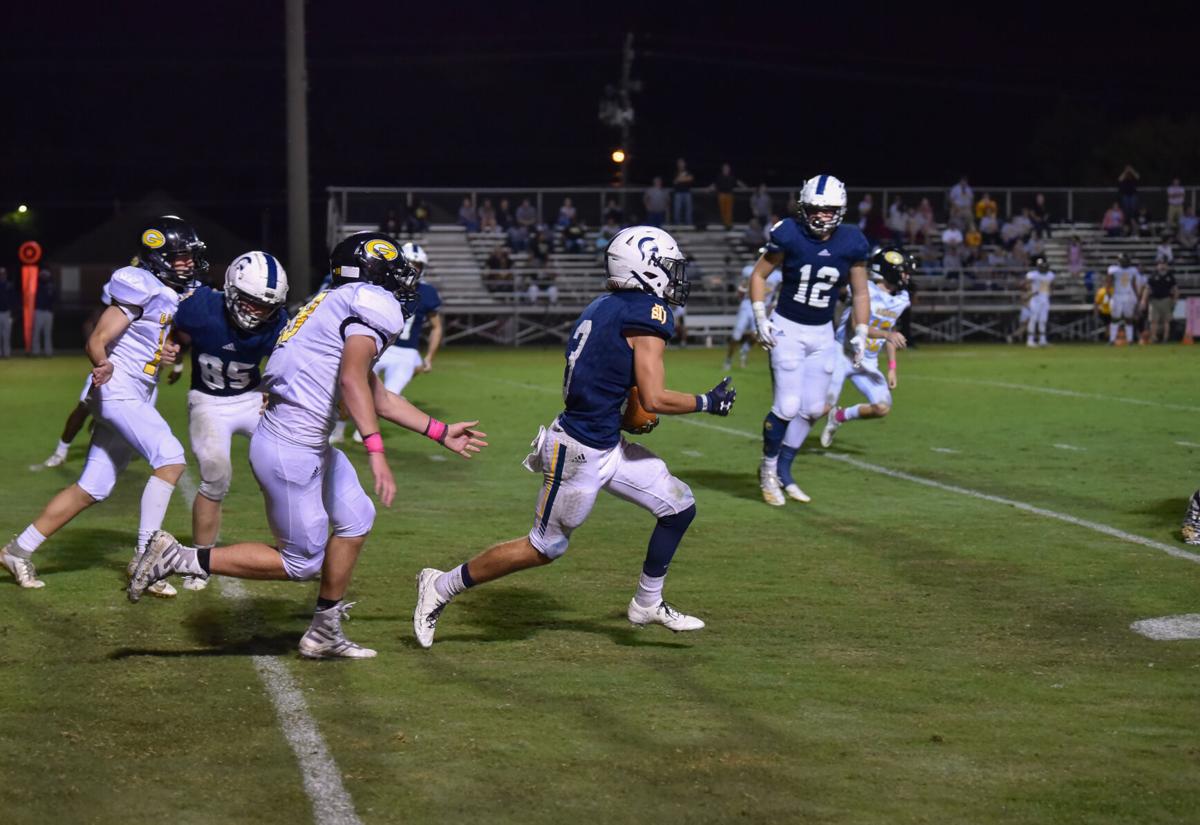 St. James' receiver Bradley Thomas makes a leaping reception in the end zone, but it was negated by a penalty against the Trojans.

Cosner Harrison looks for running room against the Panthers on Friday night.

Geneva quarterback Damion Kemmerlin rolls out with the Trojan defense in pursuit.

St. James' Malik Melton gets a hand on the ball, deflecting a touchdown away from Geneva's Noah Johnson.

Geneva's Tim McReynolds heads down the sideline for a big gain in Friday's game against St. James.

MONROEVILLE -- Jashawn Cooper ran 67 yards for a touchdown on the first play from scrimmage and added an 11-yard touchdown run in the second quarter as the Eagles improved to 9-0 with a 35-6 win over 3A Region 3 opponent Monroe County on Friday.

Wallis scored on a 17-yard run late in the first half, Jamal Cooper added an 8-yard touchdown run a minute into the second quarter and Jashawn Cooper and Harris (2-yard run) closed out the half with touchdown runs for a comfortable lead.

The Eagles close out the regular season with a game at Alabama Christian on Thursday before playing host to a Region 2 opponent in the first round of the 3A playoffs on Nov. 6.

UNION SPRINGS – Jalen Clark completed 10 of 13 passes for 155 yards and a pair of touchdowns and rushed 10 times for 68 yards and a touchdown to help the Eagles complete an undefeated region record with a 32-14 win at Bullock County High on Friday night.

Clark ran 27 yards to break a scoreless tie early in the second quarter and added an 11-yard pass to tailback Corey Landers for a 15-0 lead. Otasowie Dion added a 62-yard run on the final play of the first half for a 21-0 lead.

The Hornets got on the scoreboard with a long pass a minute into the second half but Clark put the Eagles back in command less than two minutes later with a 25-yard touchdown pass to Garrett Weathers.

Aaron Treubig closed out the scoring with a 37-yard field goal with 4:53 remaining in the game.

Dion finished as the Eagles’ leading rusher with 95 yards on four carries, while Landers added 77 yards on 14 carries. Landers also scored on his only reception of the night.

Defensively, Miller McCarthy led ACA with nine tackles, followed by Jack Thomas with five tackles, Khalil Jackson with five tackles and a sack and Schlemmer and Landers with four tackles each. Sanders Manning also had an interception.

Alabama Christian (8-1) closes out regular-season play with a game at home against Montgomery Academy on Thursday before hosting the first round of the 4A state playoffs on Nov. 6.

GOSHEN – Catholic scored on all five possessions in the first half on the way to an easy region victory over Goshen on Friday night.

Jeremiah Cobb rushed for 161 yards and a touchdown on 13 carries and DJ Carter pulled in four receptions for 142 yards and three touchdowns as the Knights built a 31-0 halftime lead.

Caleb McCreary, who completed 5 of 8 passes for 164 yards, threw the first of three touchdown passes to Carter for 13 yards on fourth down to cap the Knights’ opening possession. Callan Gadilhe kicked a field goal on the second possession, Cobb ran 42 yards to set up his 23-yard scoring run on the next play and McCreary completed touchdown strikes of 47 and 72 yards to Carter for a 31-0 lead.

Goshen’s first possession of the second half resulted in an interception return for a touchdown by Catholic linebacker TJ Dudley and Willie Sagers added a 15-yard touchdown run on the Knights’ initial second-half possession for a 45-0 lead.

Robbie Guice capped the Catholic scoring with a 50-yard scoring run for a 52-0 lead as Catholic improved to 7-0 in region play to give head coach Aubrey Blackwell his 50th career win.

Catholic (8-2) will take a week off before hosting the first round of the 3A state playoffs at home on Nov. 6.

Cosner Harrison rushed for 157 yards and scored two of his three touchdowns in the second quarter as the Trojans shook off a slow start with a 35-20 win over Geneva on Friday night at Carlisle Field.

Harrison scored on runs of 3, 7 and 7 yards, the last one giving St. James a 28-0 lead less than a minute into the second half. KJ Jackson completed 10 of 16 passes for 169 yards and a pair of touchdowns, including a 13-yard pass to Clayton Craft for the game’s first points with 10:40 remaining in the second quarter.

After Harrison’s touchdown runs, Geneva staged a brief rally as Tim McReynolds returned a punt 57 yards for a touchdown and Damion Kemmerlin ran 10 yards for another Panther score, trimming the St. James’ lead to 28-12.

St. James (7-2) closes out the regular season with a game on Friday at Trinity, then returns home to host the first round of the 4A state playoffs on Nov. 6.

CHILDERSBURG – Coleman Stanley ran for a pair of touchdowns and John David Bonner threw for a pair as Trinity closed out region play with a 37-6 win at Childersburg on Friday night.

Bonner, the starting quarterback, threw touchdown passes to Dawson Criswell and William Roberson while Stanley, who enters the game in goal line situations, ran for a pair of touchdowns to help the Wildcat offense.

Stanley scored on a quarterback keeper and ran in the two-point conversion to help Trinity wipe out a 6-0 deficit and take the lead for good. After Bonner’s pass to Criswell and a touchdown by Jim Portis, Stanley added another scoring run for a 30-6 halftime lead.

Trinity (7-2) closes out the regular season at home on Friday against St. James before hosting the first round of the 3A state playoffs on Nov. 6.

GREENVILLE – Quinshon Judkins rushed for 154 yards and three touchdowns on 23 carries as Pike Road defeated the Tigers 35-7 on Friday.

Judkins scored the game’s first touchdown on a 7-yard run and scored the Patriots’ last two touchdowns on runs of 38 and 5 yards.

Eli Clark completed 8 of 14 passes for 163 yards and two touchdowns, including a 60-yard touchdown play on a screen pass to Blake Durham.

Durham finished with 91 yards on four carries, while Trey Wallace had 47 yards on a pair of catches. Griffin Robinson’s only catch went for 24 yards and a touchdown.

Pike Road (9-0) returns home to play Booker T. Washington in the regular-season finale next Friday before playing host to Shelby County in the first round of the 5A state playoffs on Nov. 6.

LINEVILLE – Elisha McNeil rushed for 159 yards and a touchdown on 11 carries and the Tigers were held to 66 total yards as Central crushed Tallassee’s playoff hopes with a 33-0 shutout on Friday night.

Tallassee (2-7) was clinging to playoff hopes despite having to forfeit two region games to Talladega and Holtville in the past two weeks, but needed to beat Central while Elmore County beat Talladega.

Instead, the Tigers were shut out while Talladega defeated Elmore County 66-29.

The Central defense held the Tigers to 47 rushing yards while holding their leading rusher, Jalyn Daniels, to just 24 yards on 13 carries.

Tallassee closes out the 2020 season at home next week with a game against Geneva.