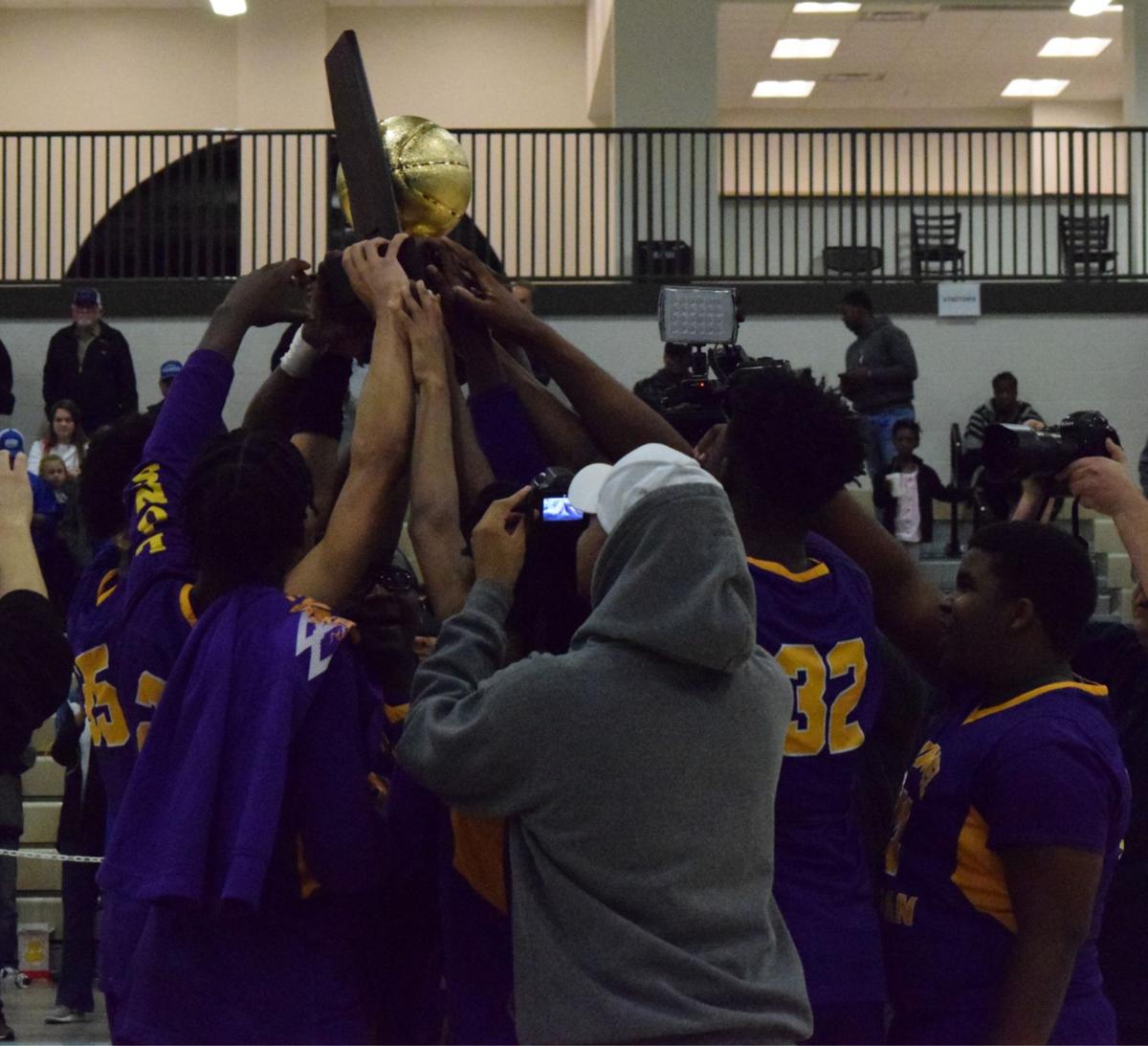 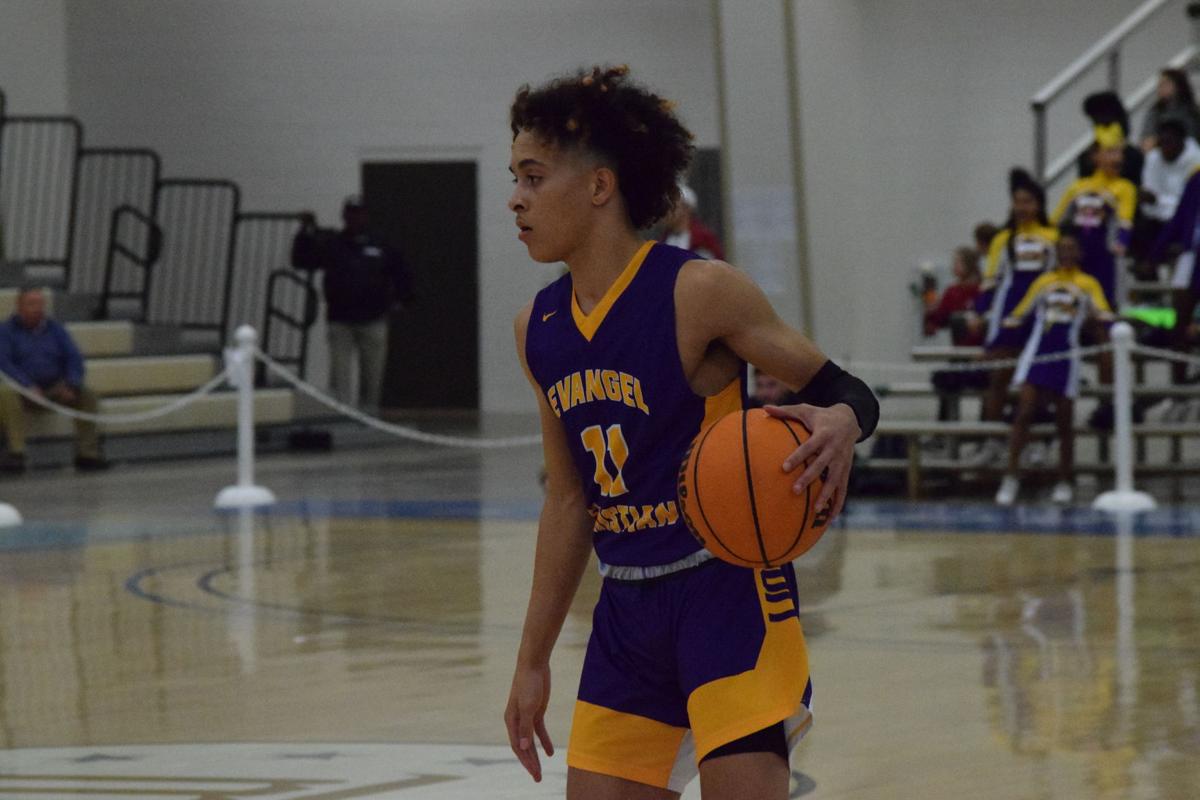 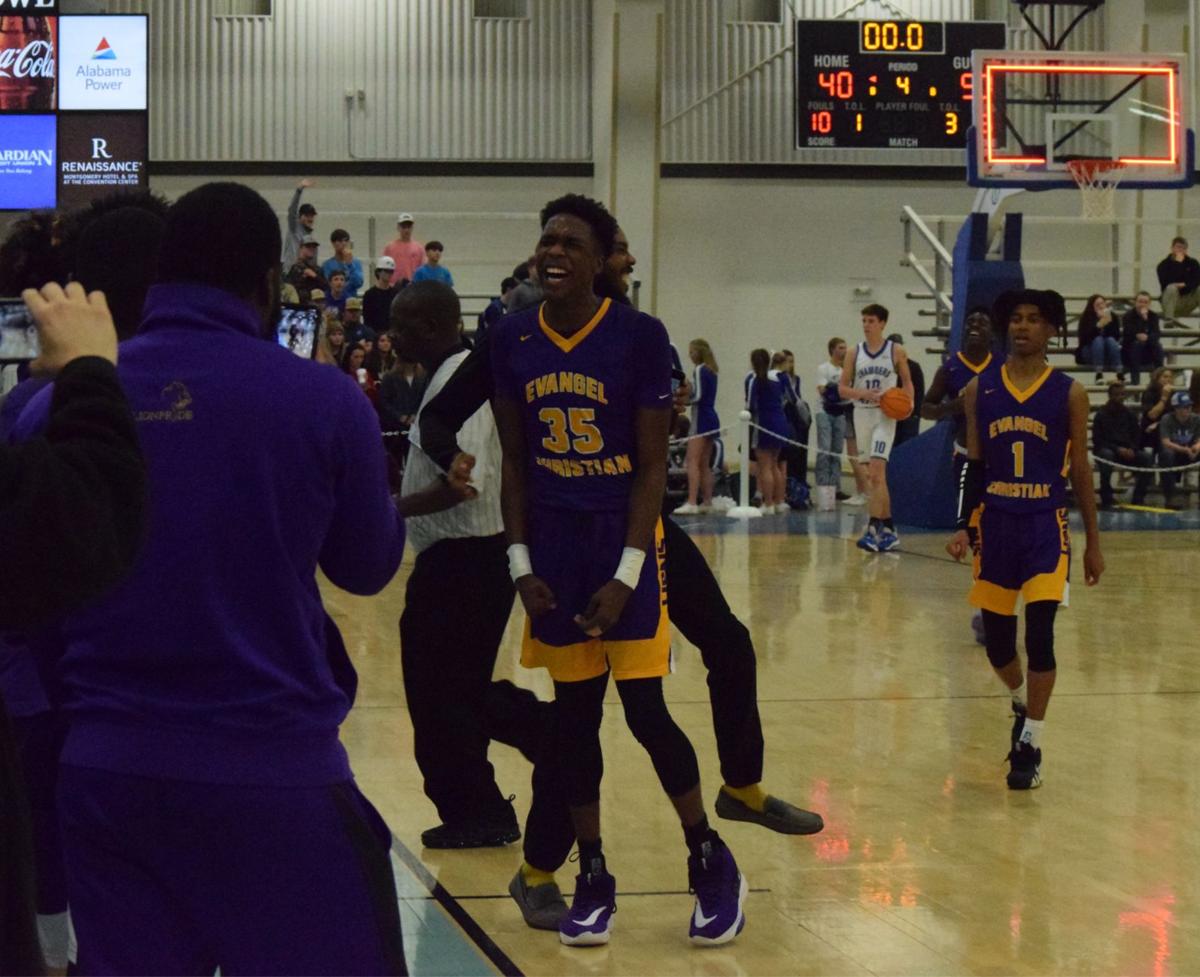 Senior Jordan Grice reacts as the clock hits zero in the championship game. 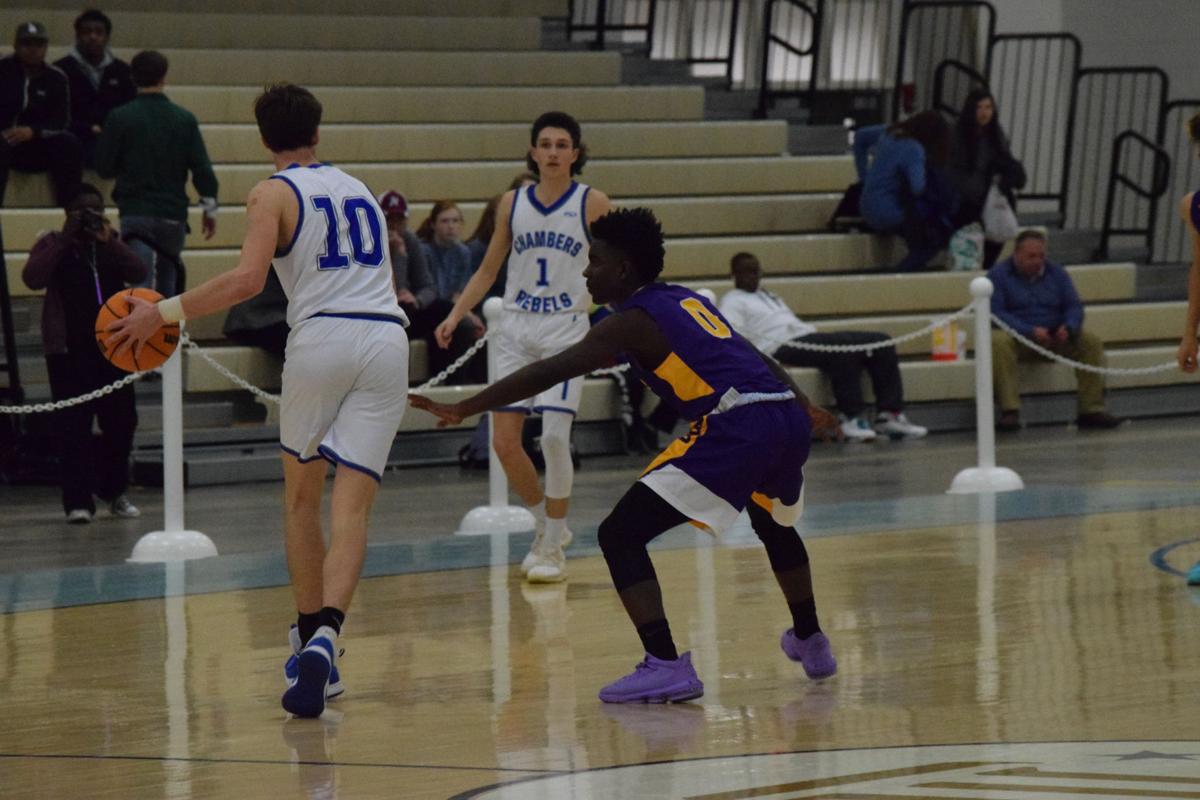 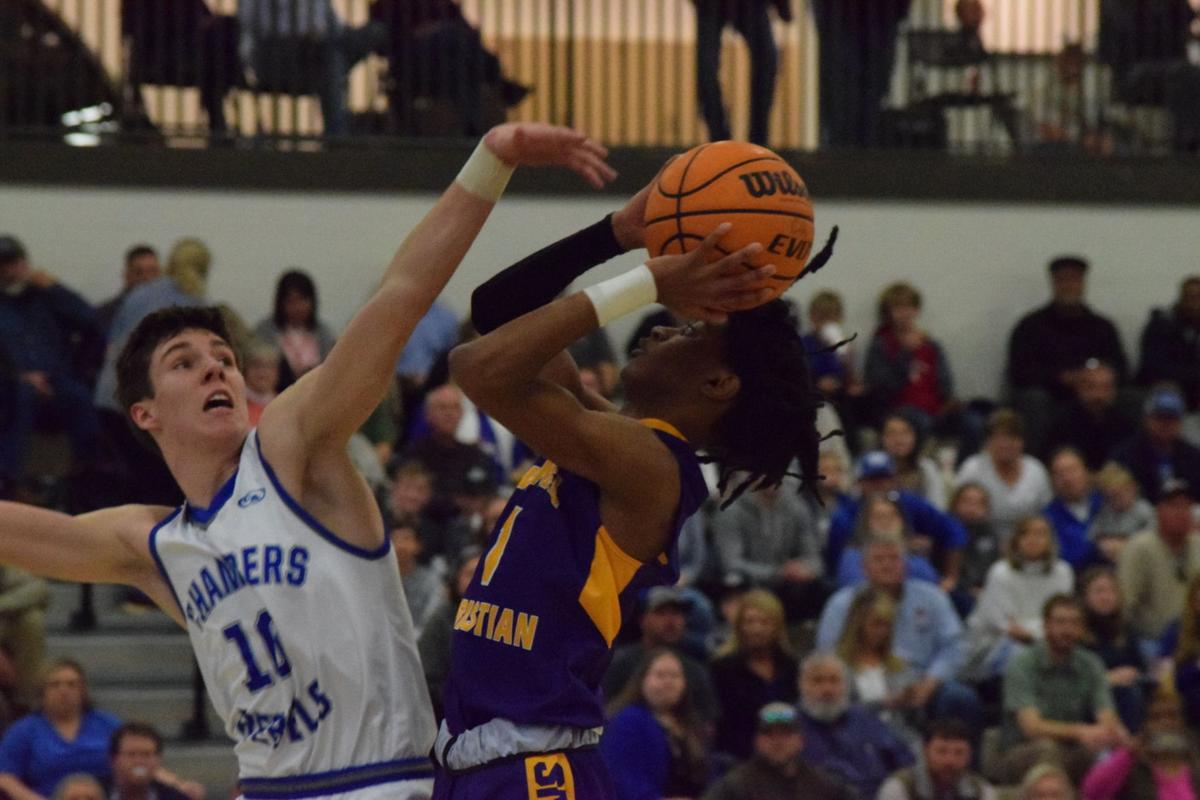 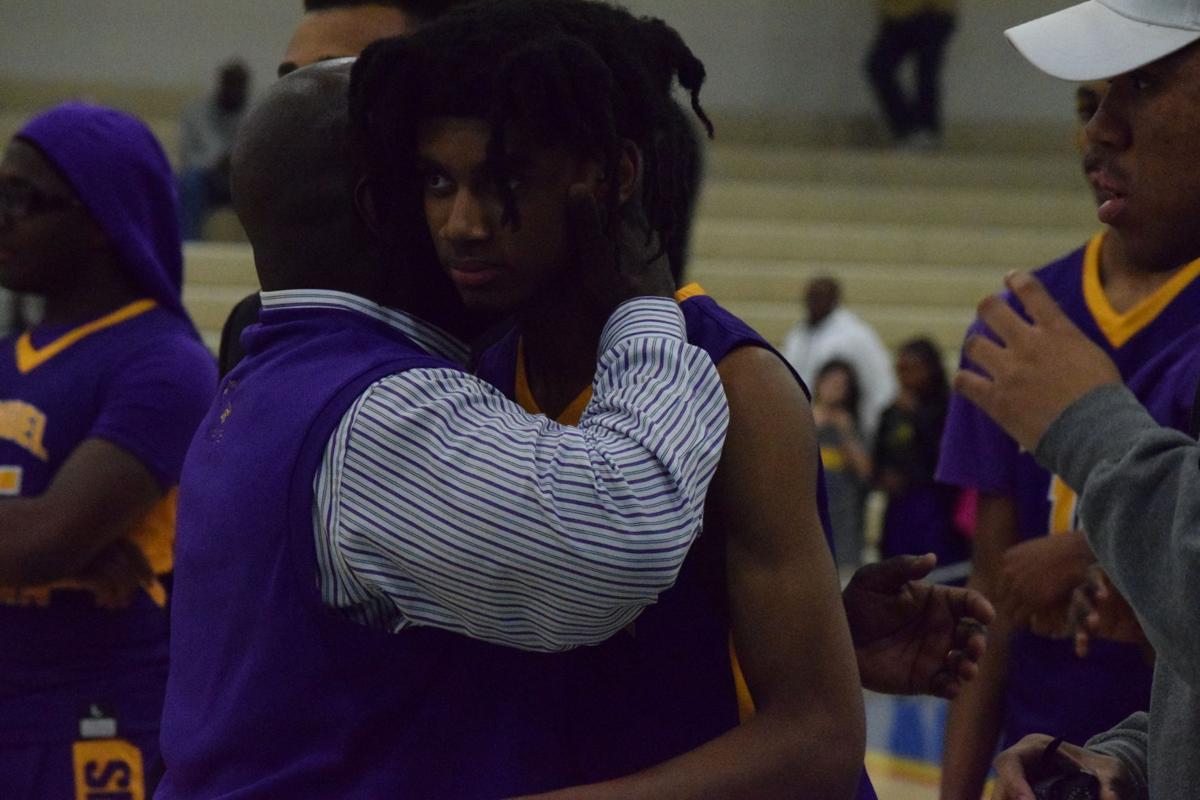 Senior Jordan Grice reacts as the clock hits zero in the championship game.

When Chambers Academy scored five consecutive points early in the second half, Evangel Christian Academy found itself trailing for the first time in the state tournament.

The Rebels were packed tightly in a zone to prevent post players Jakolvian Johnson and Jordan Grice from doing any damage in the paint and neither Marcus Townsend nor David Werking had found any rhythm from the outside.

Werking responded with five consecutive points to put the Lions back in front and added a 3-pointer to seal the victory as Evangel captured the Alabama Independent School Association Class A state championship with a 50-40 win over Chambers on Friday night at the Multiplex.

It was the second consecutive year Evangel defeated Chambers for the title and their third championship in four consecutive trips to the finals.

“I’d say this one is a lot more gratifying,” said Werking, one of three seniors on the team. “Last year, it was my first year coming in and I wasn’t too familiar with the program Coach (Kerwin) Washington was teaching us. I feel like I grew a lot and he’s helped me a lot and that’s how I feel I became the player I am today.”

Evangel (28-1) needed everything Werking could deliver to win its 22nd consecutive game and bring home the state title. With Johnson and Grice held in check, the Rebels dared Werking, Townsend and point guard Tyree Curry to beat them from the perimeter.

“They made us change the way we run our offense,” Curry said. “They packed it in and made us shoot nothing but 3s. They mainly focused on our paint play.”

Werking fired four consecutive times from the 3-point arc, but all of his missiles bounced harmlessly off the rim, rebounded by the Rebels.

“We knew what kind of defense they were going to be in,” Werking said. “But we weren’t ready like we thought we were. We had to make some adjustments.”

The first of those adjustments came late in the first quarter as Washington replaced Townsend with Kennedy Holland and pulled aside Werking for a few quick comments.

“He was off some and we told him now it’s time to drive,” Washington said. “He had some key, key drives that we were able to get some baskets and some fouls on them. His action gave us some motivation to push through.”

After four misses, Werking took the next pass and squared up at the free-throw line, draining the shot to give him – and his teammates – some much-needed confidence.

“After the first quarter, I saw the 3-ball wasn’t falling,” Werking said, “so after Tyree passed it to me on the hand off, I took a mid-range shot and it went in and I started getting in a rhythm. That’s pretty much how I adjusted to it.”

Holland bailed out the struggling offense with a pair of 3-pointers in the second quarter and Curry’s defense on Chambers star Payton Allen was crucial to help the Lions maintain a slight lead throughout the first half.

“If he can guard all five guys on the floor, he will,” Washington said of Curry. “But our lightning rod all season has been Kennedy Holland. My young little point guard has defensive intensity and worked on his jump shot a lot with assistant coach Darius Dixon. For him to come out in the first half and give us two big 3s, that was a big lift for us.”

Holland’s six points gave Evangel a 21-17 halftime lead, but when Josh Holliday scored the first five points of the second half to put the Rebels in front for the first time, it was time for Werking to take over the game.

“He stepped up big time,” Curry said. “We all had a bad first half. We tried to get into the paint more, drawing fouls from the ‘bigs.’ Coach told him we needed him and he stepped up and did his part.”

Werking’s 3-pointer with 7:23 left in the game gave Evangel a 39-30 and Chambers would go nearly four minutes with just one basket, sealing the Rebels’ fate.

“They played with the passion of their coach,” Washington said. “And what (Chambers coach) Jason (Allen) puts into his kids is a fight to the end. We knew they were going to be tough. They scrapped as much as any team that we’ve played in years. It’s not going to be pretty, you’ve just got to find a way to persevere and chip at it.”

Payton Allen led the Rebels with 17 points, followed by Holliday with 11. Werking had 16 points, three assists and three rebounds, followed by Curry with 12 points, five assists and three steals, Townsend with six points and four rebounds, Holland with six points and two assists, Johnson with five points, nine rebounds and one blocked shot and Grice with five points, 12 rebounds and two blocked shots.

Joining Curry, Werking and Johnson on the all-tournament team were Southern’s Kurt Tucker and Raphe Daniel and Allen of Chambers Academy.

Washington made out the schedule, but said the concept is one he learned from former Evangel coach Dale Kemsel, who Washington worked for as an assistant before taking over as head coach in 2013.

“I make sure I schedule nothing but championship-level programs,” Washington said. “We know that because we’re Class A we’re sometimes going to play weaker schools, but if we’re going to consider ourselves one of the best we’ve got to play the best. This year was like none other.

“God is so good. He blessed us with health. We had six key guys and two other reserves that we can count on and we went nearly 30 games with that. We’re just thankful all we had was a sprained wrist, a sore knee and a couple of scrapes.”