Catholic coach Sellers Dubberley, left, and Trinity coach Sarah Dubberley, right, found themselves on opposing sides of their 4A Area 4 matchup on Tuesday. 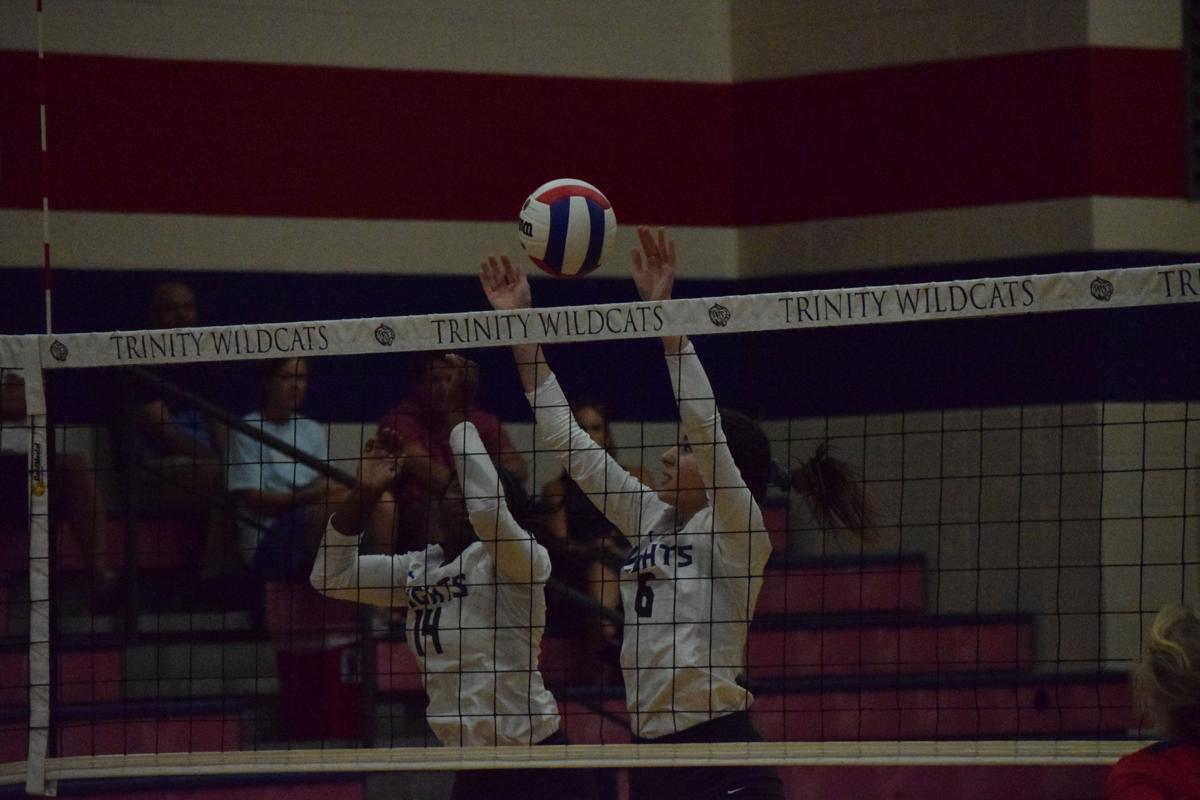 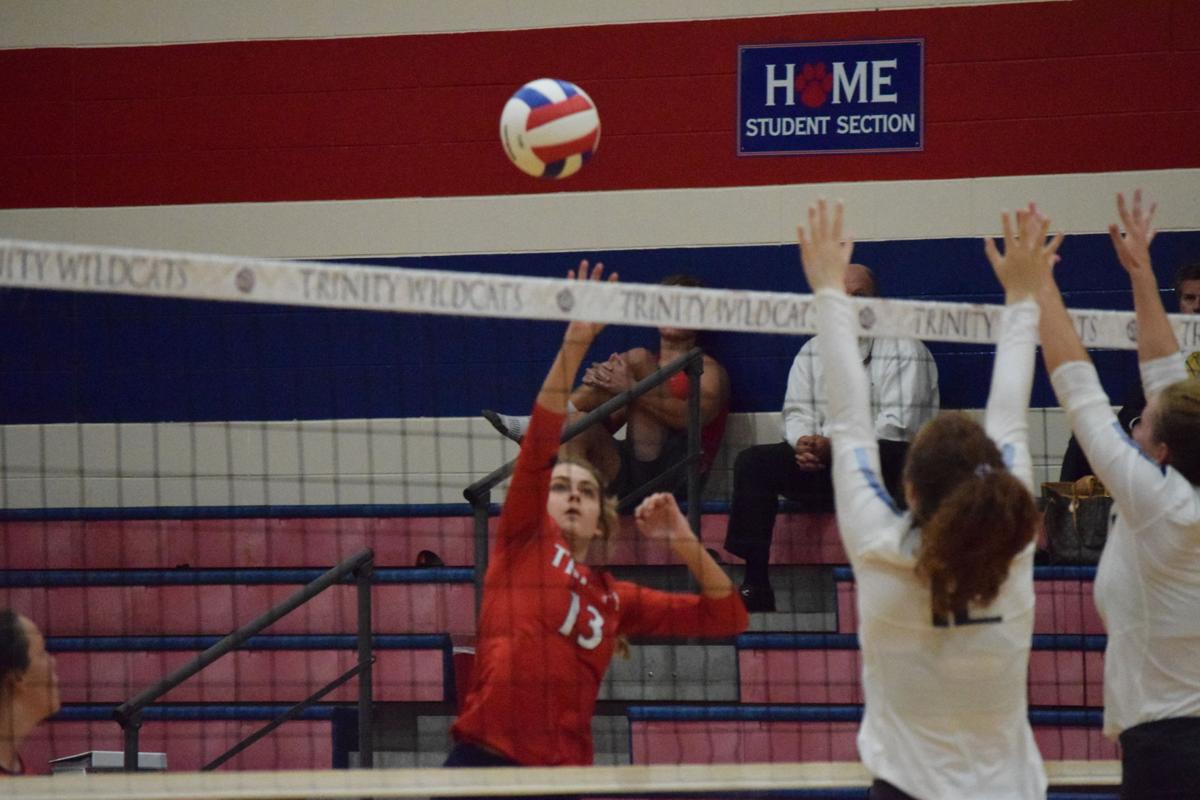 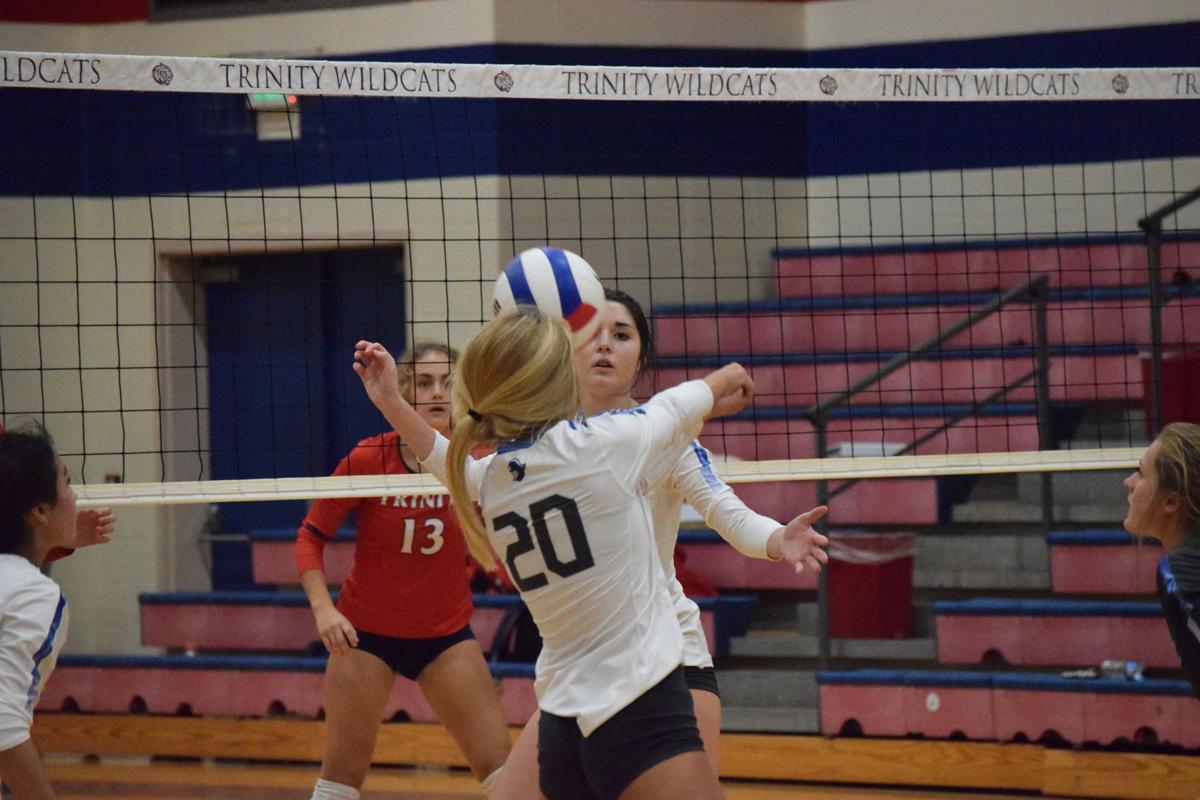 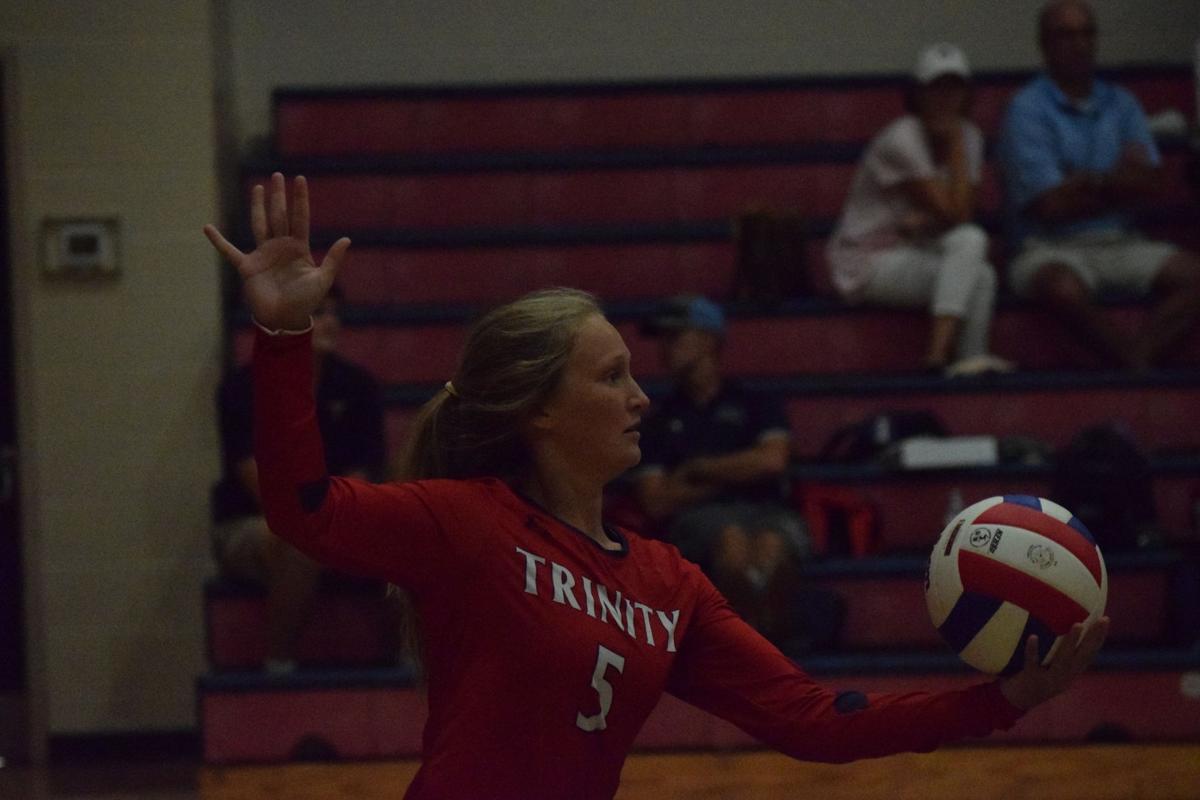 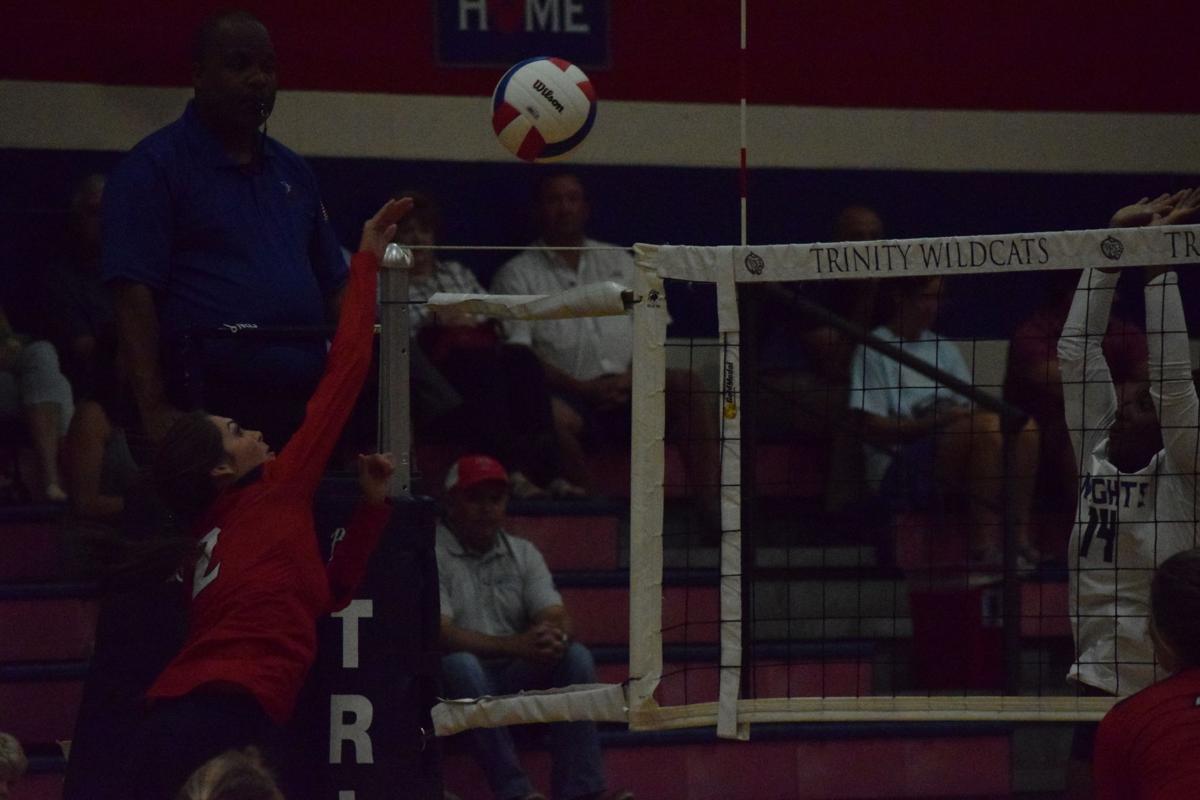 Catholic coach Sellers Dubberley, left, and Trinity coach Sarah Dubberley, right, found themselves on opposing sides of their 4A Area 4 matchup on Tuesday.

It might have meant a little more, even though it was an area volleyball matchup between two Capital City Conference foes.

“I wish we were playing in the backyard,” he said. “These girls care, these parents care. It’s fun competing against each other, but it’s also tough. We’re in the same area. That’s why you go, hey, we’ve got to win this game.”

Sellers and Sarah have been married for five years and usually chat at home about their Capital City Juniors club volleyball teams. For the past three years, Sellers also coached at Edgewood Academy, leading the Wildcats to the state finals each season. This past February, Catholic officials announced his hiring as the Knights’ new volleyball coach.

A month later, Trinity athletic director Jessica Lassiter decided to replace her old position and hire a new volleyball coach for the Wildcats. She chose Sarah, placing the pair on a collision course as area rivals. On Saturday, the two found themselves facing each other in the Mayor’s Cup, a best-of-three set won by Trinity 25-14, 18-25 and 15-10. On Tuesday night, the couple squared off again in the Trinity gym.

“We’ve been preparing ourselves for this for six months,” Sellers said. “We were both kind of building up to today and then on Saturday, within about 30 minutes, oh, we’re playing each other. That’s tough. It’s tough any time but twice in a couple of days? To get up for that and to get your head wrapped around it? It’s not easy. There’s no game plan for it. There’s no blueprint to know how to handle this the right way.”

Sarah was supposed to win as Sellers faces a rebuilding task at Catholic. That didn’t make Saturday evening around the Dubberley household any easier.

“We have a ‘no volleyball talk’ rule at home,” Sarah said. “We try to keep our house our house, which is weird because we’ve always either coached together or he was AISA (at Edgewood) and I was middle school and JV (volleyball coach) at MA. We could talk about it. Now it’s different.

“It helped that Auburn won on Saturday because we’re Auburn fans so that gave us something to talk about.”

On Tuesday morning, she spoke to her husband before the two went to work at separate schools.

“Sometimes I’m wondering what we got ourselves into,” Sarah Dubberly said, “but I told him this morning that we’re blessed to be in this situation. He got to come into the AHSAA which is a step up and I got to move from middle school to varsity, so as uncomfortable as it is, we’re doing what’s best for our family.”

With their oldest son watching from the stands, the two coaches and their teams squared off again, putting on an intense and entertaining show that was finally won by Trinity, 25-17, 23-25, 27-25, 22-25 and 17-15. The intensity of the coaches rubbed off on the players, admitted Trinity’s Hollister Dorey.

“I think so,” Dorey said, “because we knew how big a deal it was to her so we were all fighting as hard as we can. She was a lot more competitive. On calls, she was more into it. And she’d tell us more strategy.”

While it was an important game in the always competitive 4A Area 4 that includes Alabama Christian and LAMP, both tried to treat the game like any other. At one point, the game was halted for several minutes as Sellers pleaded his case with officials to change the score of the game because of a substitution infraction by Trinity.

“It’s hard because I look down at her and I see the looks on her face throughout a set and I know exactly what see’s thinking,” Sellers said. “There’s something going on with the (team scorers) and I look at her and I can tell her smirks so well, whether it’s a nervous smirk or an ‘oh, I just got him.’ Whatever it is, I’m used to being on her bench and now I’m looking down the sideline like, ‘she knows we got away with something’ or ‘she knows she got away with something.’ She doesn’t even have to say anything. I know that look.”

Which is why as the argument waged on for several moments, drawing the intervention of both officials as well as the scorekeepers, Sarah refused to look down the sideline toward Sellers.

“She knew that we were right and we should have been awarded the points,” Sellers said. “And the look on her face, that little grin, I know that she knows. She knows that I’m right about it and she doesn’t want to give it away.”

Trinity improved to 8-5 overall and 1-0 in area play after reaching the semifinals of the 4A state tournament a year ago under Lassiter. Now, the players have had to adjust to a new coach taking over a high school program for the first time in her life.

“It’s tough,” Sarah said. “I know my weaknesses, normally – coming in too easy and then having to play catch-up on discipline. This year, I think I overstepped that. I was really determined to make them more disciplined and in doing so I think I came off too intense so I had to find that balance.”

Catholic fell to 4-4 overall and 0-1 in area play but the Knights are much improved in Sellers’ first season.

So much progress the Knights forced a fifth and deciding set, then fought back from an early deficit to pull even at 7-7, then again at 14-14 and 15-15 before the Wildcats scored the final two points to pull out the win.

Had Catholic won, Dorey predicted, it might not have been a pretty postgame story for the Wildcats’ new coach.

“I think she might have been pretty mad,” Dorey said. “She’s very competitive.”

“It probably would have been a lot worse,” Sarah admitted. “I think he handles it better than I would. But I’m also pregnant, so I’d probably be more emotional.

“I feel like I can’t really enjoy the win as much as I normally might because it’s my husband. As much as I want him to be happy, I also want to win, so it’s a little tough.”

The couple will face each other again in the Catholic gym on Oct. 3 and perhaps a third time in the area tournament later that month. Until one of them changes jobs, they’ll have to get accustomed to these unhappy meetings.

“(Tuesday’s loss) was tough for me, but I see my wife doing incredible things. She wants to win. As terrible as it is for me, she’s succeeding right now. Tonight, she got one of the biggest wins in her fairly young coaching career. She did a great job and her girls did a great job.