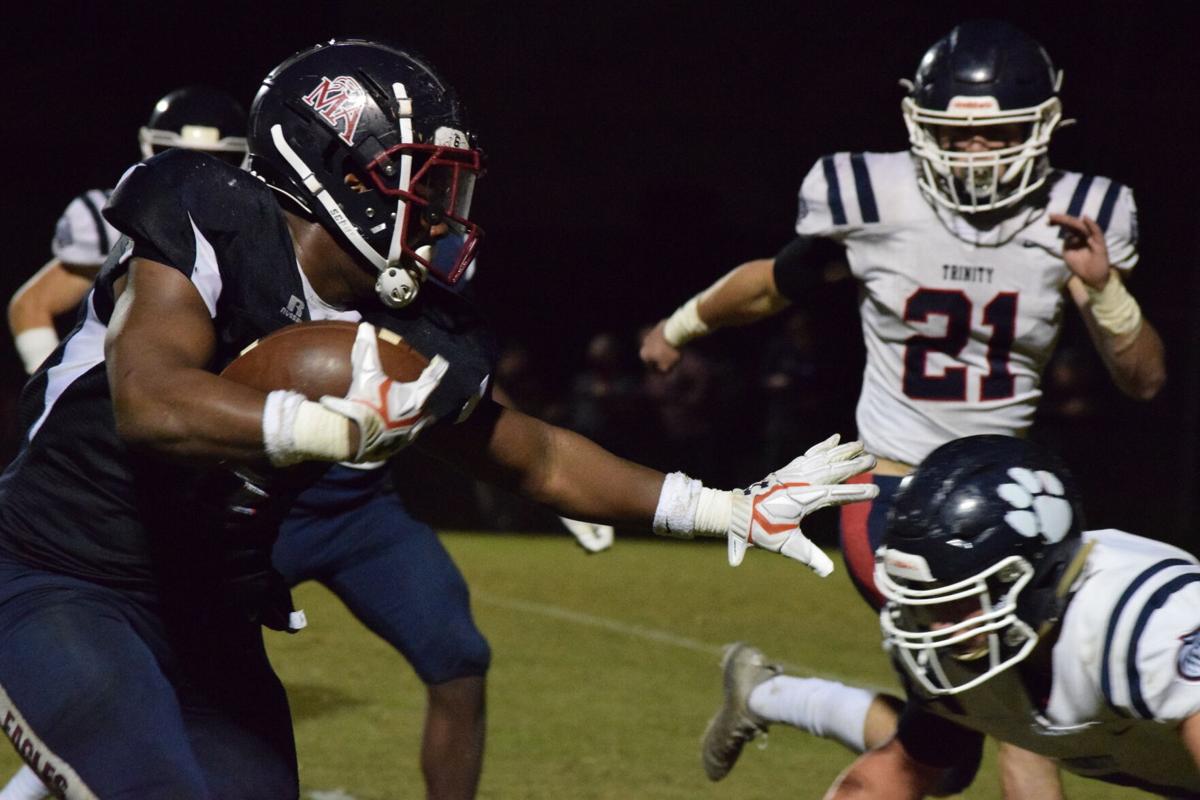 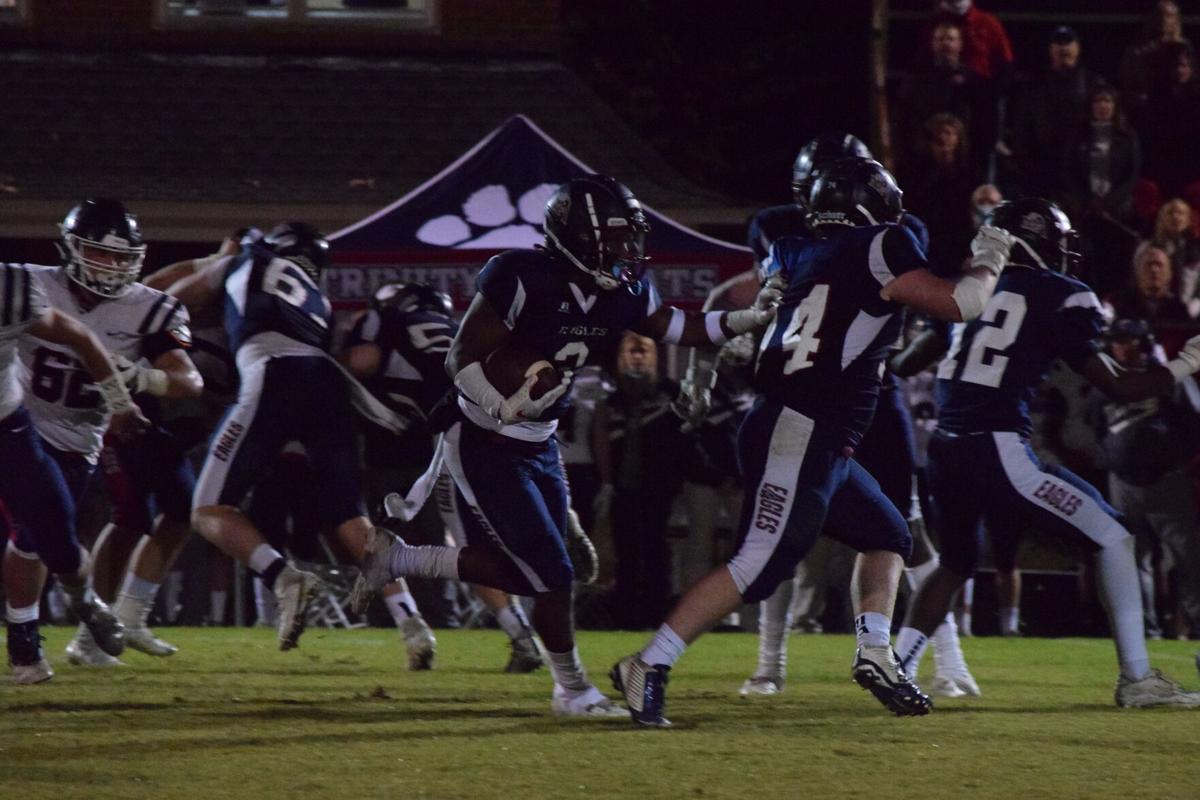 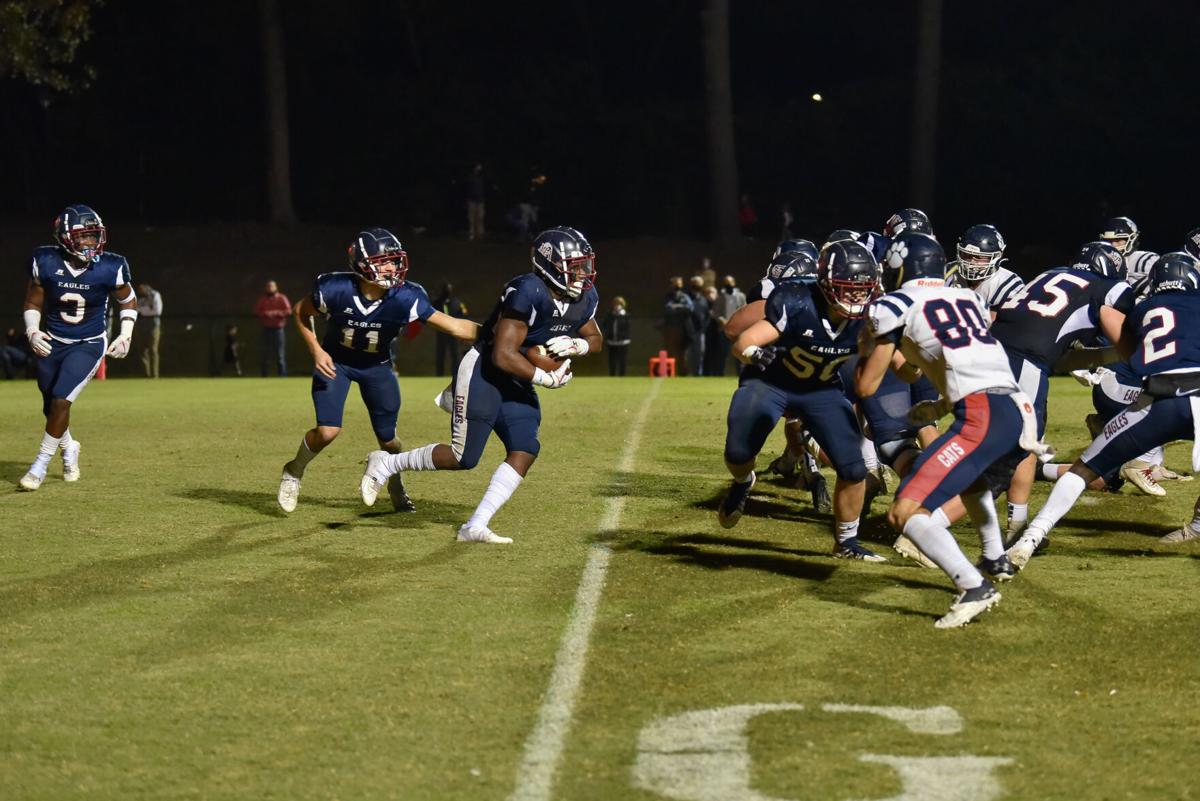 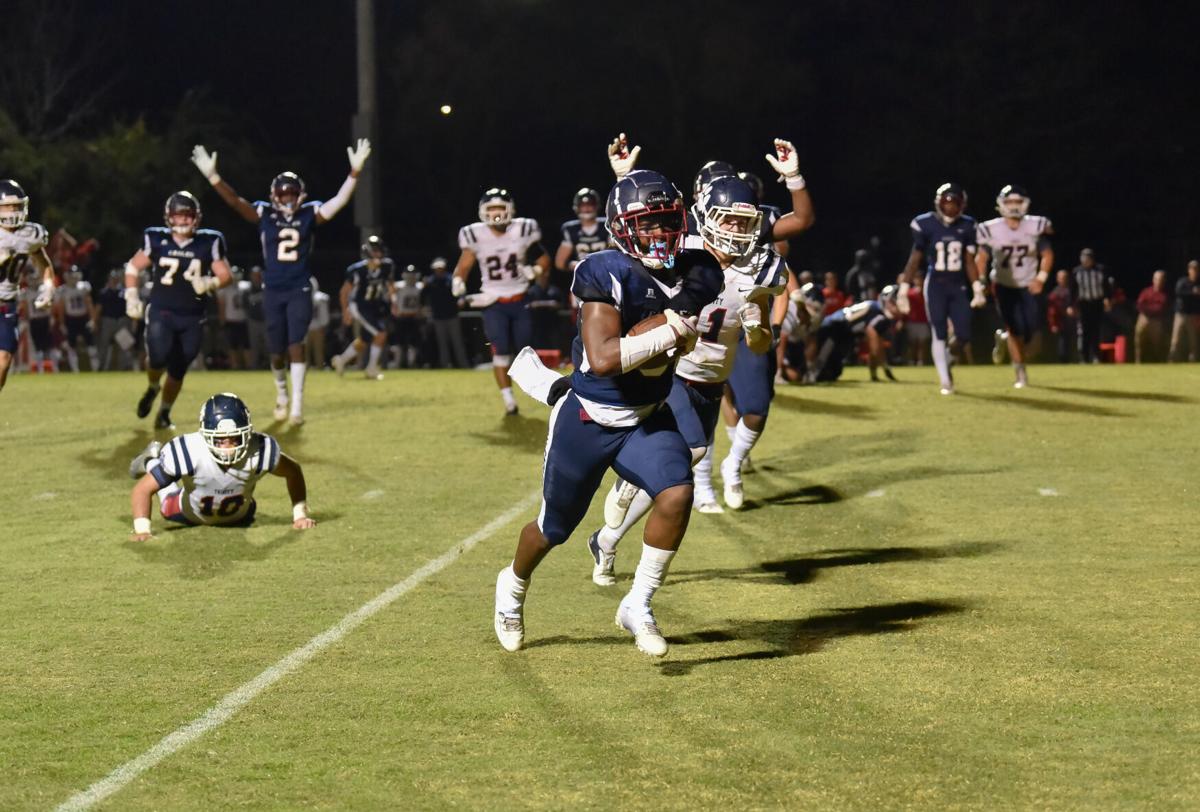 Jamal Cooper limps to the right corner of the end zone for a 21-7 halftime lead. 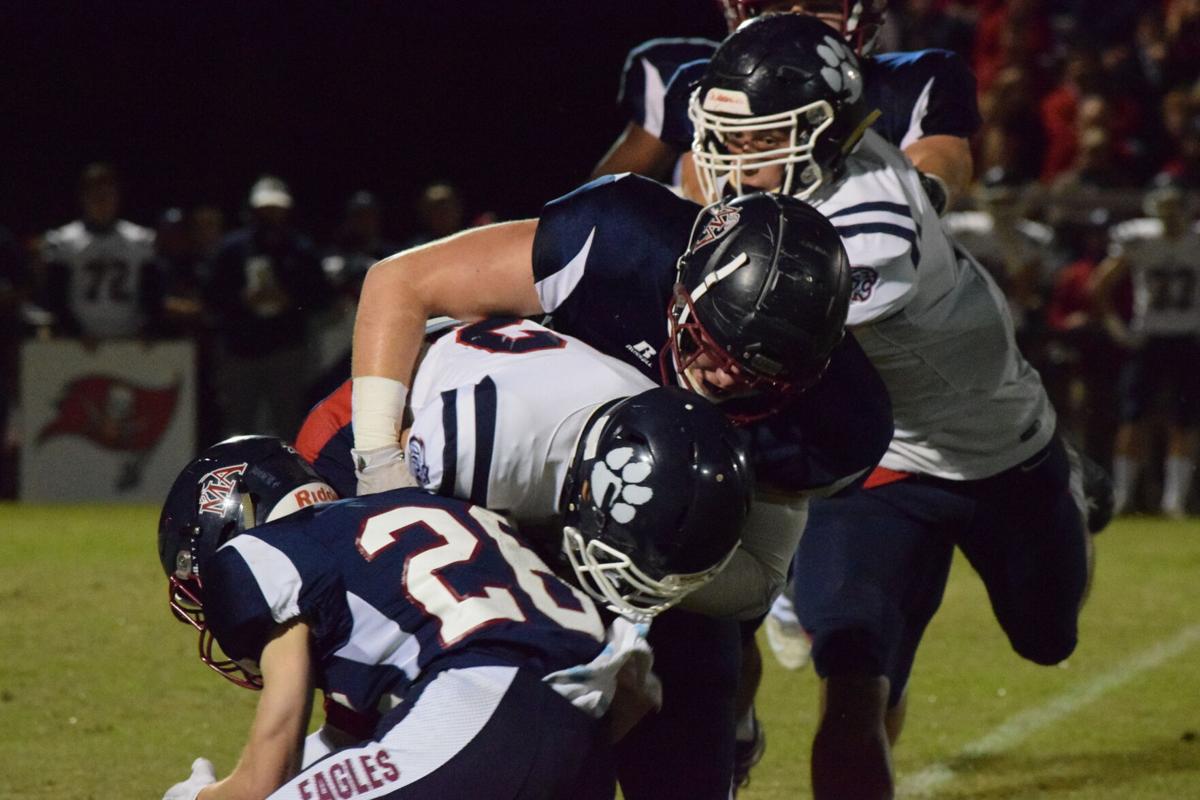 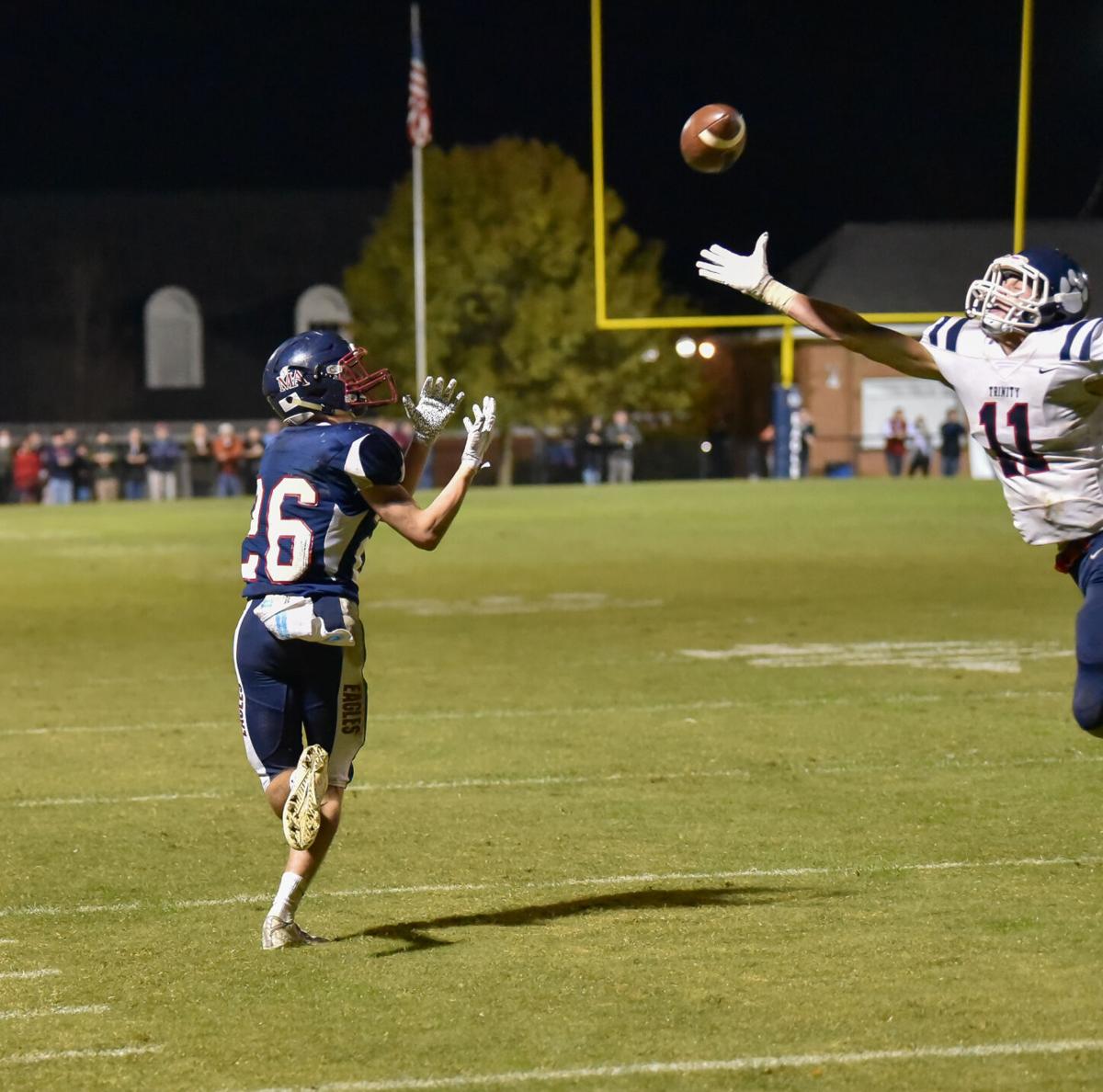 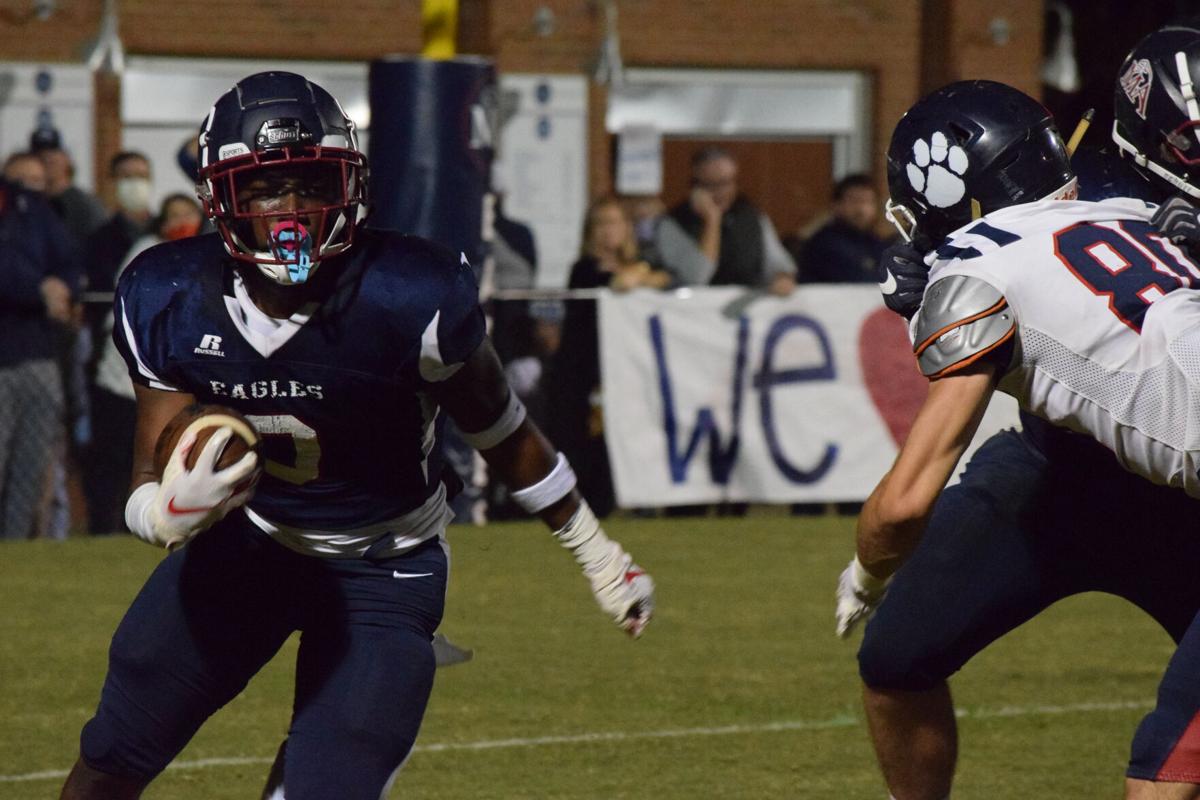 Jamal Cooper ran for 127 yards and two touchdowns on eight carries against the Wildcats. 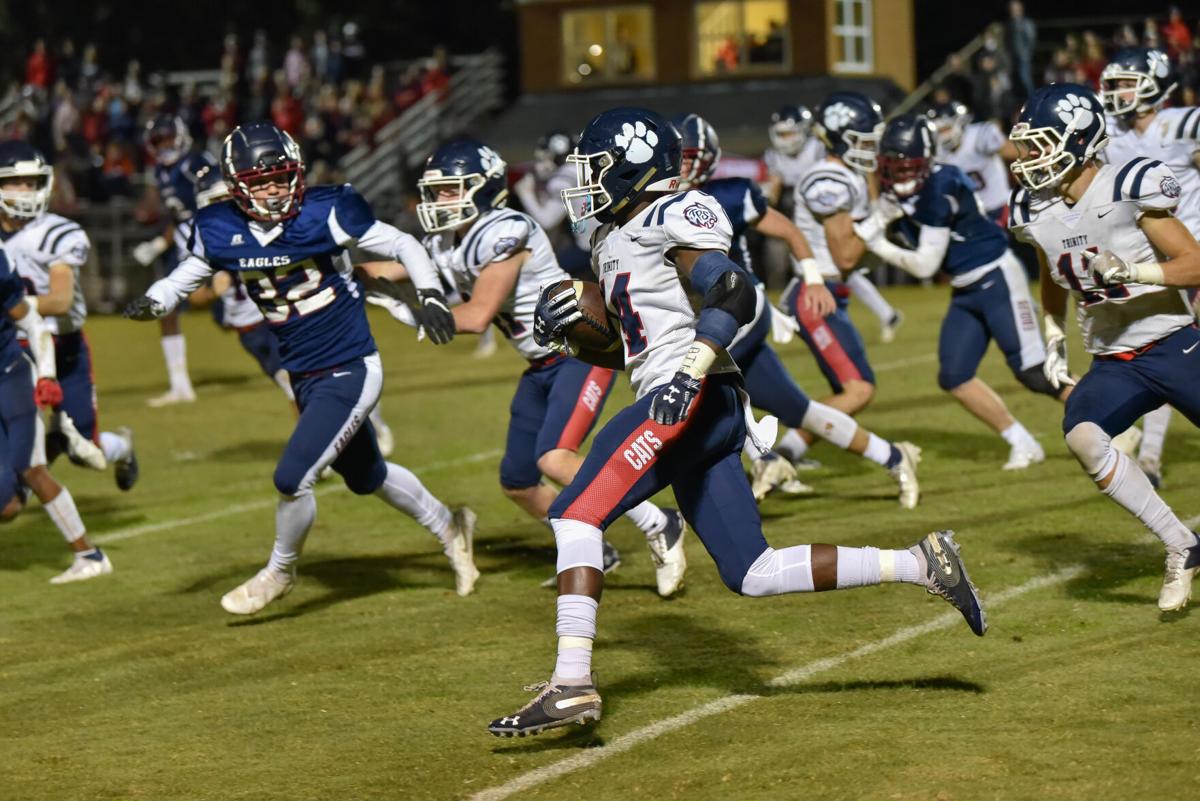 Trinity's Jay Tymes returns a kickoff against the Eagles on Friday night. 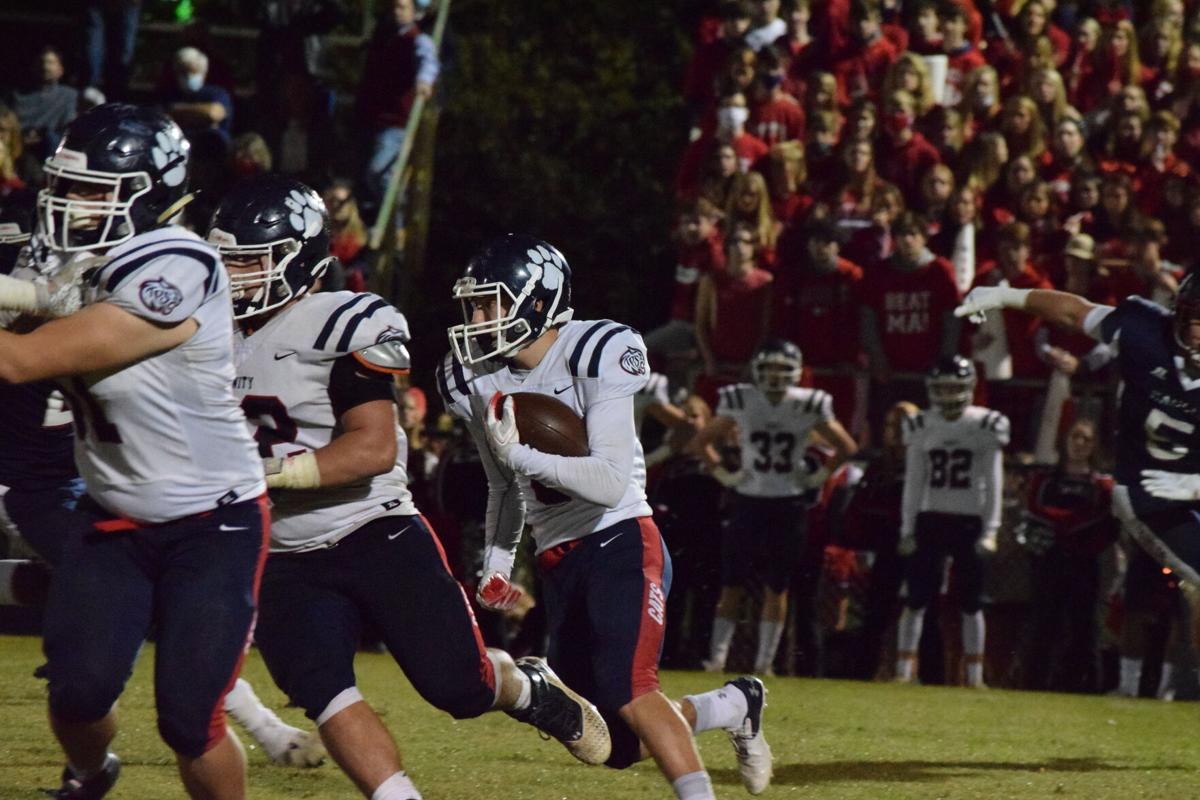 Trinity tailback Chase Letner follows his blockers in the second half.

Jamal Cooper limps to the right corner of the end zone for a 21-7 halftime lead.

Jamal Cooper ran for 127 yards and two touchdowns on eight carries against the Wildcats.

Trinity's Jay Tymes returns a kickoff against the Eagles on Friday night.

Trinity tailback Chase Letner follows his blockers in the second half.

The Cooper brothers were simply too much for any team on Friday night.

The inside-outside duo of Jashawn and Jamal Cooper combined for 290 yards and five touchdowns as Montgomery Academy handed Trinity one of its worst postseason losses in school history, pounding the Wildcats 42-21 at McLemore Field on Friday night.

“I think Jashawn Cooper might have got himself a D-I offer after that game,” Montgomery Academy coach Robert Johnson said, “and Jamal has learned how to run that buck sweep and he is a load when he’s running full speed up in there.”

With the win, Montgomery Academy (13-0) advanced to the 3A semifinals against Catholic (11-2) next week at home, ensuring the Capital City of a team in the Super 7 Championships at Bryant-Denny Stadium the following week.

Trinity saw its remarkable season end at 10-3, making its 10th trip to the quarterfinals in school history, but suffering its worst loss in the third round since Demopolis pounded the Wildcats 46-7 in 2004, a year after Trinity beat Demopolis on the way to the 4A state title.

Trinity made a few halftime adjustments and came out with a little fire in the third quarter, but the score doesn’t tell the whole story. The Wildcats got nearly half of their first-half production on a 44-yard touchdown reception by Jake Hufham, averaging just three yards per play on the other 24 first-half snaps. The Cooper brothers, meanwhile, averaged 11.6 yards per carry on 25 plays over the first three quarters before sitting out the fourth quarter with the game comfortably in hand.

“At home, we always joke around, argue with each other, like who’s the better running back, who has more yards,” said Jashawn, the sophomore fullback. “It’s competitive between me and him. He was impressive today. He did a great job. I can’t argue with him about this one.”

Jamal, the junior tailback, struck first, shaking off an attempted tackle by Hufham near midfield and sprinting 52 yards to the end zone on the fourth play of the game.

Early in the second quarter, it was Jashawn’s turn. After Johnson called for a fourth-down run on his 18-yard line that came up short, Trinity’s John David Bonner threw toward the end zone for William Roberson, only to have Jamal make a leaping interception to kill the threat.

“Jamal bailed me out,” Johnson said.

“I’m expecting something big-time from him,” Jamal said. “That was a big play. I believed we were going to get that first down, but it is what it is and we had to come back and make a play and I did that.”

A pair of penalties backed up the Eagles to the 2-yard line, where Jashawn took a handoff and went 98 yards to the end zone for a 14-0 lead.

“They had us deep in the backfield, but we just stayed calm and did what we were supposed to do and the result happened,” Jashawn said. “We put in a new formation for it because we knew they were going to be flying left and right, like they were the first time, when they were stopping it in the first game. I thought I was going to get caught. I was just running for my life.”

After Hufham’s touchdown reception cut the lead in half, Montgomery Academy responded with an impressive nine-play drive. Jamal limped off the field after turning his ankle on the seventh play, then returned and limped in from seven yards out two plays later for a 21-7 halftime lead.

Trinity would cut into the lead one more time on a Dawson Criswell touchdown reception, but Jashawn scored on a 5-yard run and again on a 7-yard run, set up by a 64-yard interception return by Carter Wallis.

Trinity’s next possession ended with another interception, this one by Nigel Walker on the Montgomery Academy 2-yard line, and was followed three plays later by a 91-yard touchdown reception by Wallis for a 42-14 lead.

“Coming into the game, Coach said it’s hard to beat a team twice,” Jashawn said. “We knew it wasn’t going to be an easy game. I thought it was going to be a hard-fought game, all four quarters, but we just stuck to our plan the whole week and came out with the win.”

Defensively, Judson Lindsey had 10 tackles to lead MA, followed by Jackson Kelly with eight. Ky Williamson led the Trinity defense with 13 tackles, followed by Walton Cherry with 11 and Will Chandler with 10.

Montgomery Academy advanced to the semifinals for the first time since losing to T.R. Miller 14-12 in 2002.

“I expected us to win, but not this big,” Jamal said. “We work real hard in practice during the season and it’s all paying off.”