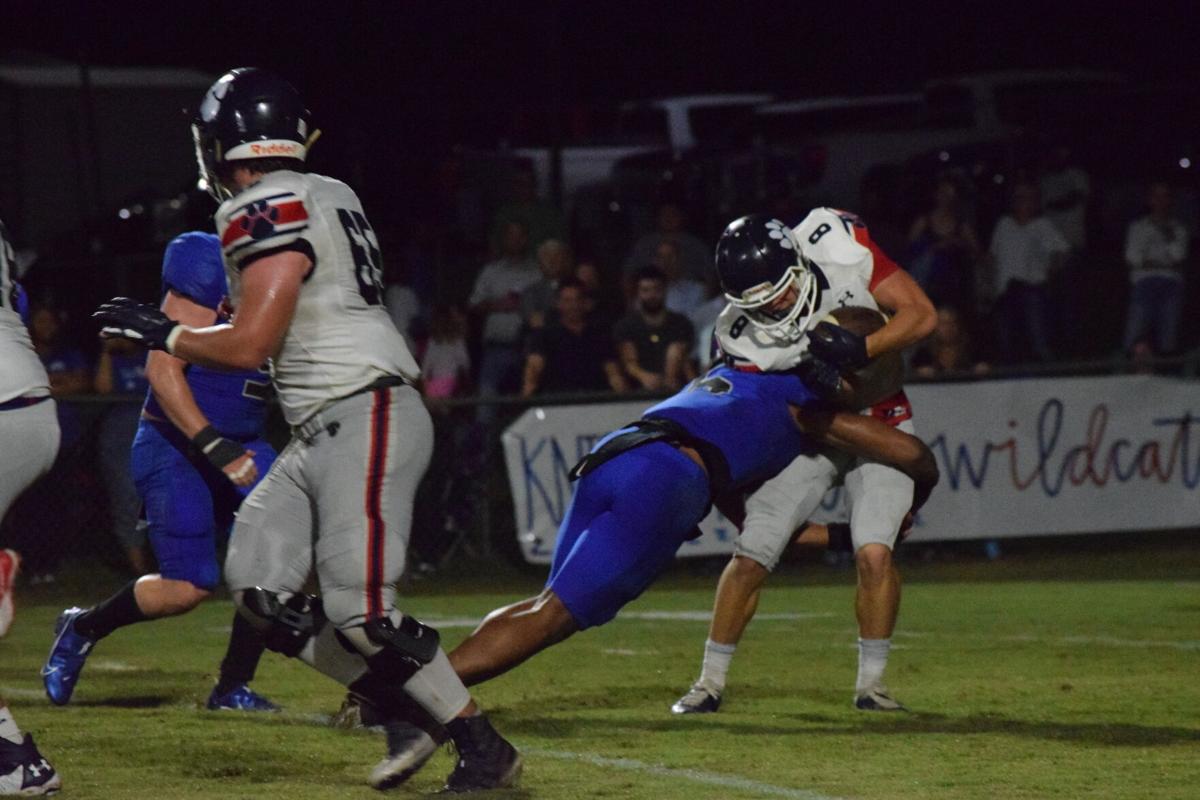 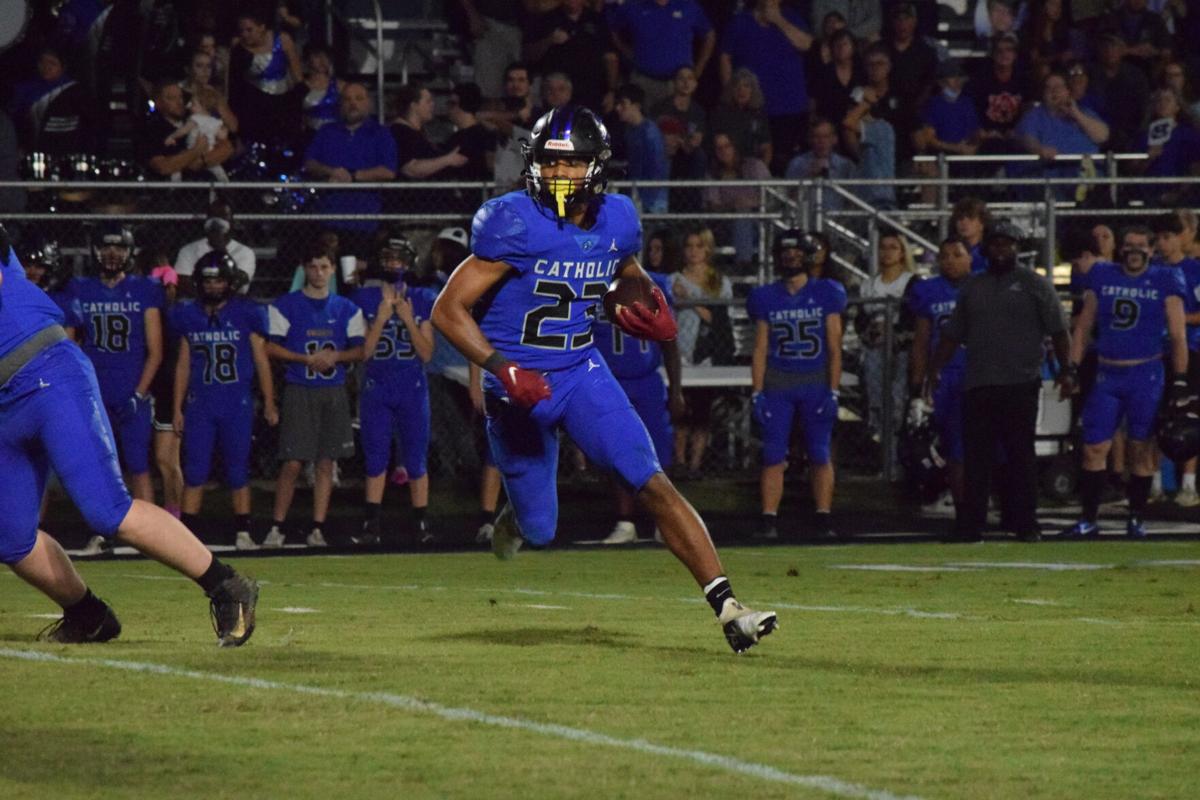 Catholic tailback Jeremiah Cobb rushed for 176 yards on 20 carries and accounted for three touchdowns in Friday's win over Trinity. 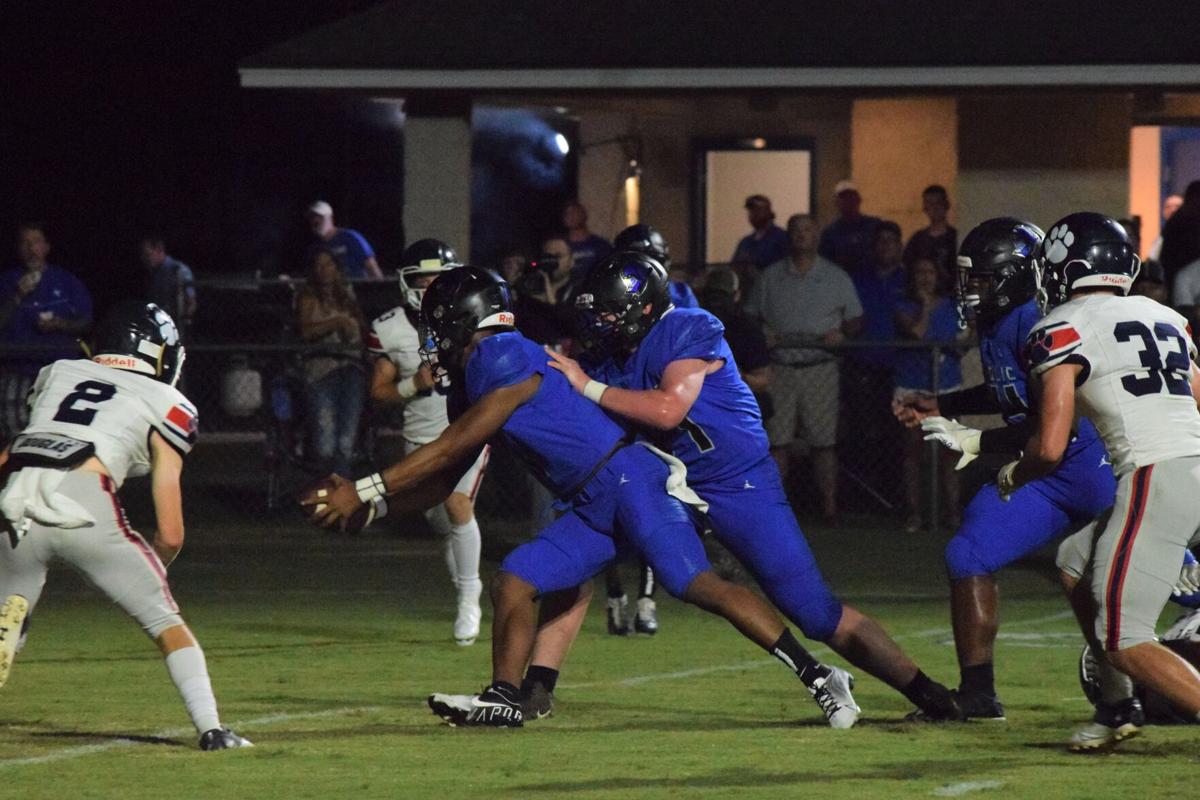 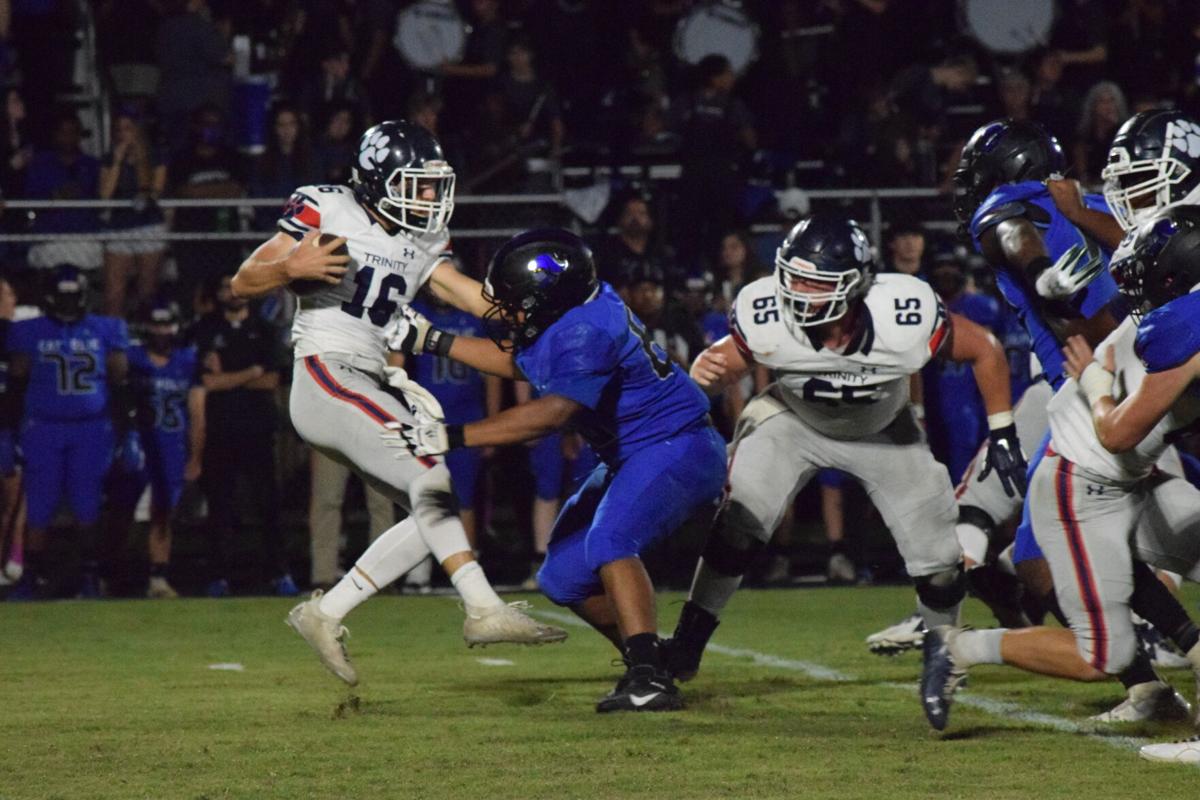 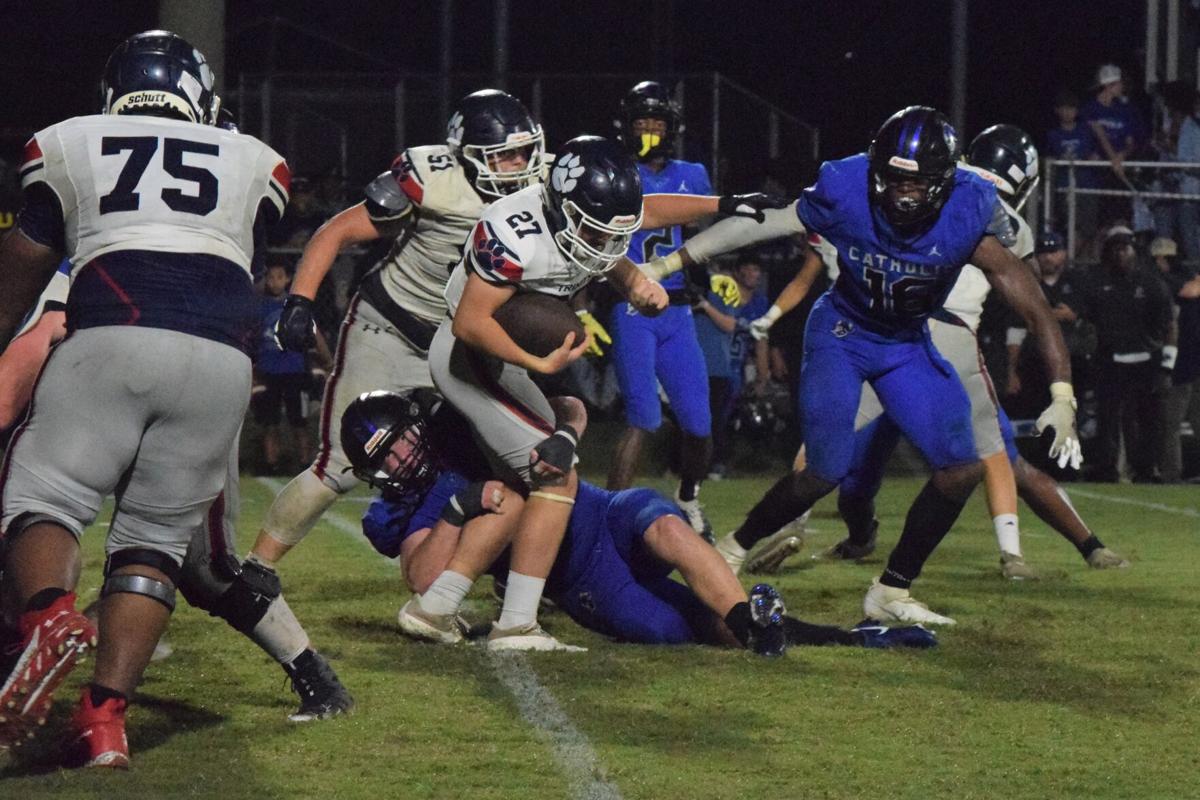 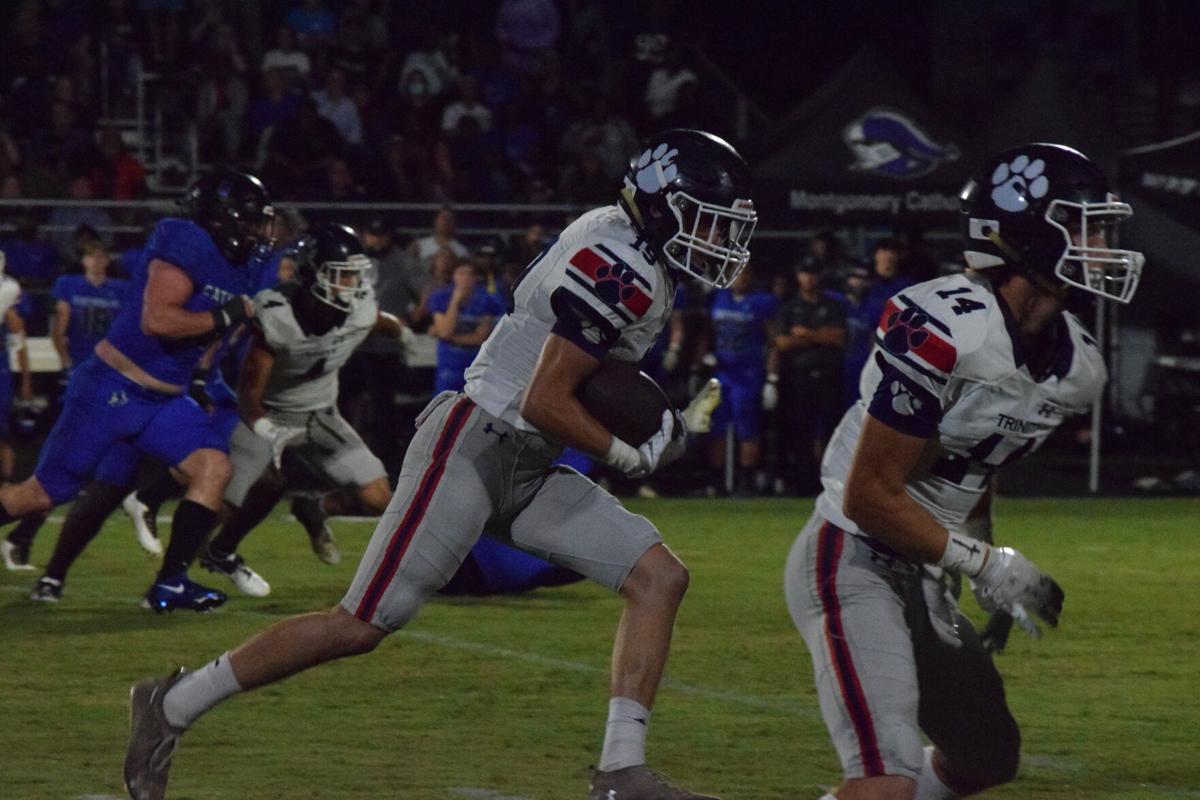 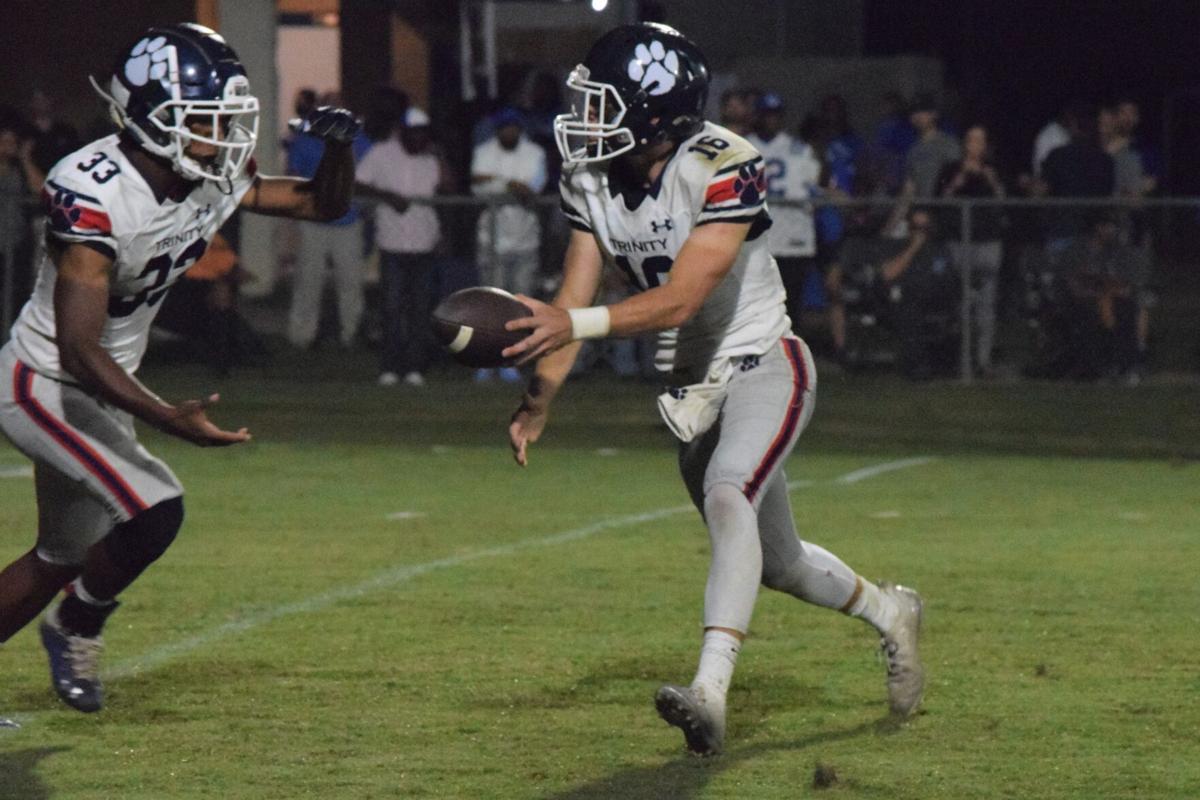 Trinity's AJ Glover takes the handoff from Coleman Stanley in the fourth quarter of Friday's game.

Catholic tailback Jeremiah Cobb rushed for 176 yards on 20 carries and accounted for three touchdowns in Friday's win over Trinity.

Trinity's AJ Glover takes the handoff from Coleman Stanley in the fourth quarter of Friday's game.

If Catholic made a statement with a 42-0 romp over Montgomery Academy in late September, the Knights put an exclamation point on it with Friday’s 52-7 rout of Trinity.

“We sent one a couple of weeks ago,” Catholic senior T.J. Dudley said, “but this one, make them believe it.”

For the past three weeks, high school fans in the area had pointed to the matchup between a pair of unbeaten region rivals that are among the two best defensive squads in the state.

Trinity, which had posted five shutouts around an 18-15 battle earlier this season with Montgomery Academy and a 17-14 scare two weeks ago against Reeltown, figured to slow the high-octane offense of Catholic with its blue-collar defense that swarmed to the football.

Instead, fans were treated to a fireworks show that included a near-perfect, three-touchdown performance in the first half by Catholic quarterback Caleb McCreary and a two-touchdown effort by Jeremiah Cobb in the third quarter and a night that included nearly 100 rushing yards in each half.

It was the worst defeat ever by a Wildcat team to a city rival, a rich history that includes 167 games over a 49-year span that started in 1973. Catholic’s previous 11 wins in the 44-year rivalry were by an average of 13.5 points, including a 28-0 win in 2018, the previous high for a Catholic team. The Knights’ low point came in 1990 in a 43-0 defeat but nothing ever compared to Friday’s beating between a pair of unbeaten, highly regarded foes.

“Catholic’s very good,” Trinity coach Granger Shook said. “They’re coached extremely well, have some great players as everybody saw tonight and have seen all year. I really liked our offensive game plan. We had over 100 yards rushing, we converted some big third downs, we just stalled at the end.

“Defensively, we played well early. They’re just fast. We had too many missed tackles, but that’s a tribute to those guys. They play fast and run hard. I’m proud of how our kids didn’t quit. We will respond the right way.”

Trinity won the toss and elected to play to its strength but McCreary completed three passes on the opening drive before throwing his only incomplete pass of the first half. Faced with fourth and goal from the Trinity 4, McCreary dropped to pass, scrambled up the middle and broke a pair of tackles before reaching the end zone for the game’s first score.

“We wanted to set the tone early,” Catholic coach Kirk Johnson said. “It’s very rare that we get the ball first. When you drive the length of the field like that and we’ve been playing really good defense, I felt like to make a statement we needed to be up seven and not three. That’s a really good football team and if they respond with a touchdown, we’re down 7-3 and it looks different.”

McCreary would follow up his touchdown run with a pair of precision passes in the left corner of the end zone that staked his team to a 28-7 halftime lead, but no play was bigger than his fourth-down scramble through the heart of the Trinity defense on the game’s opening drive.

“We had them stopped on fourth down on the first drive of the game and he breaks three tackles,” Shook said. “He’s a good player.”

“Whenever you’re in a fight, you always want to hit them first and knock them off balance,” McCreary said. “I feel like there was a lot of confidence in my coaching staff believing in me. My offensive line was blocking well and they just trusted in me and I made the play.”

Trinity would counter with an impressive six-minute, 22-second drive but the drive stalled and they were forced to punt. McCreary went 7 for 7 in the second quarter for 150 yards and three touchdowns, hitting Kylon Griffin in the corner of the end zone, Jaden Jones on a crossing route that covered 65 yards and Cobb in the left corner of the end zone with 63 seconds left and suddenly the Knights owned a commanding 28-7 lead.

Trinity got a 68-yard up the middle for a touchdown by Chase Letner, the only touchdown scored this season on the Catholic defensive starters.

“We didn’t want to give up a point tonight, but hat’s off to them, they brought some (offensive) formations that were awesome,” Johnson said. “We had a junior safety that made a mis-check and they did a good job on the formation.”

“A missed call,” Dudley explained. “Some people were in one defense, some people in another defense. That’s on us.”

Trinity would again respond with an impressive drive to open the half, but like the first-quarter drive, this one stalled when Coleman Stanley was sacked on fourth down by Javen Augustus.

“As a defense, we don’t want anyone to get in our end zone,” Catholic defensive back Jourdan Thomas said. “I’ve got plenty of confidence in my guys.”

On the next play, Cobb ran through the defense for 62 yards and a touchdown. Seconds later, Thomas would grab a tipped pass out of the air and run 37 yards for a touchdown, but a penalty wiped out the return, leading to another Cobb touchdown run.

Cobb finished with 176 yards and two touchdowns on 20 carries, while McCreary completed 12 of 17 passes for 244 yards and three touchdowns.

Dudley, who had 12 tackles, including three for loss, closed out the scoring with a 35-yard interception return for a touchdown on the third play of the fourth quarter, his third pick-six of the season.

“It felt good,” Dudley said. “I had dropped one earlier in the game so I knew if I got the chance to do it again -- it was the same exact play -- I had to capitalize on my opportunity this time.”

Catholic (9-0) plays host to Goshen next week before hosting the first round of the 3A playoffs on Nov. 5. Trinity (7-1) will play host to Childersburg next week before traveling to St. James to close out the regular season on Oct. 29.