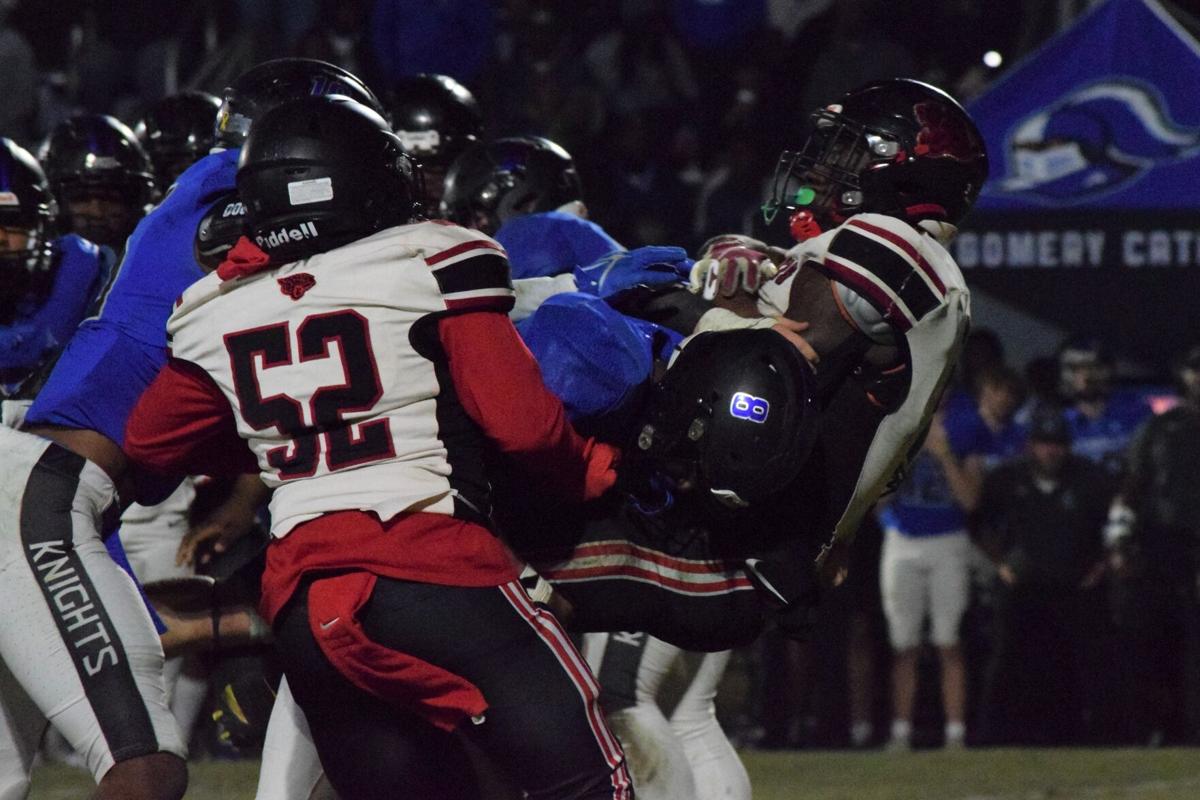 Hillcrest running back Willis Likely is picked up and dumped by Catholic linebacker Zach Underwood. 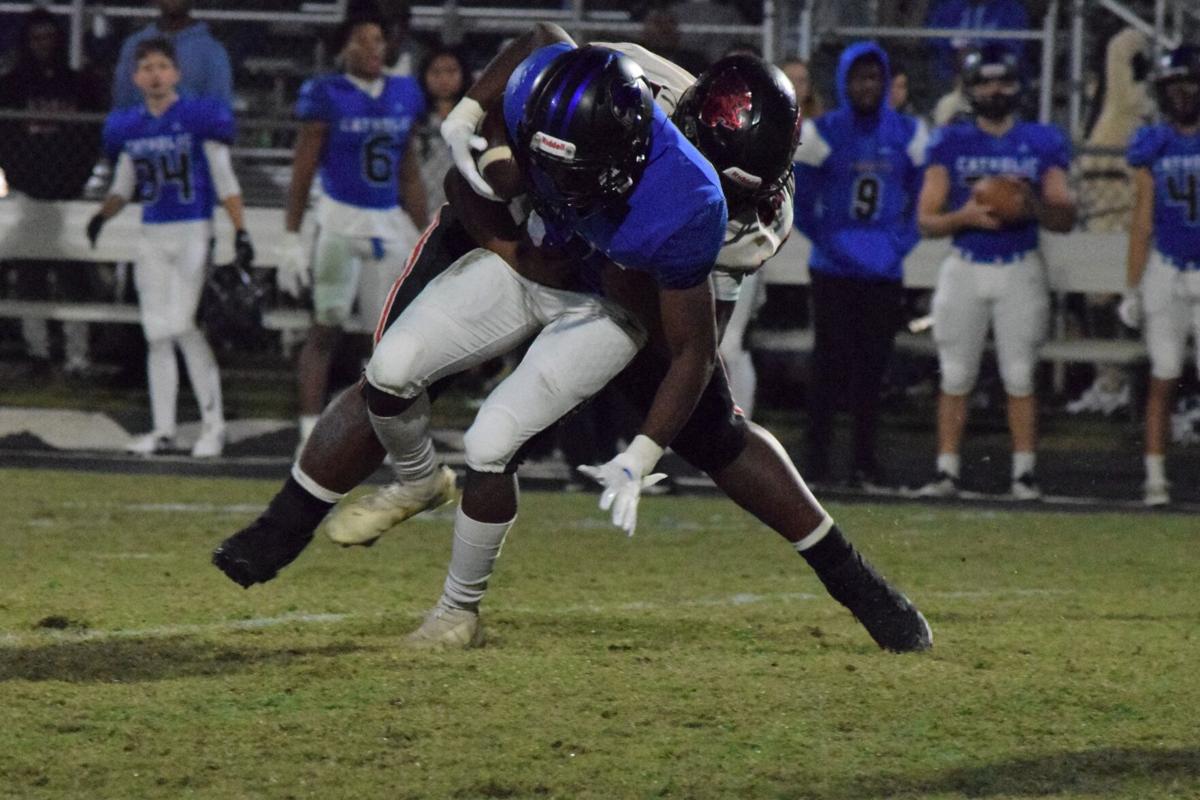 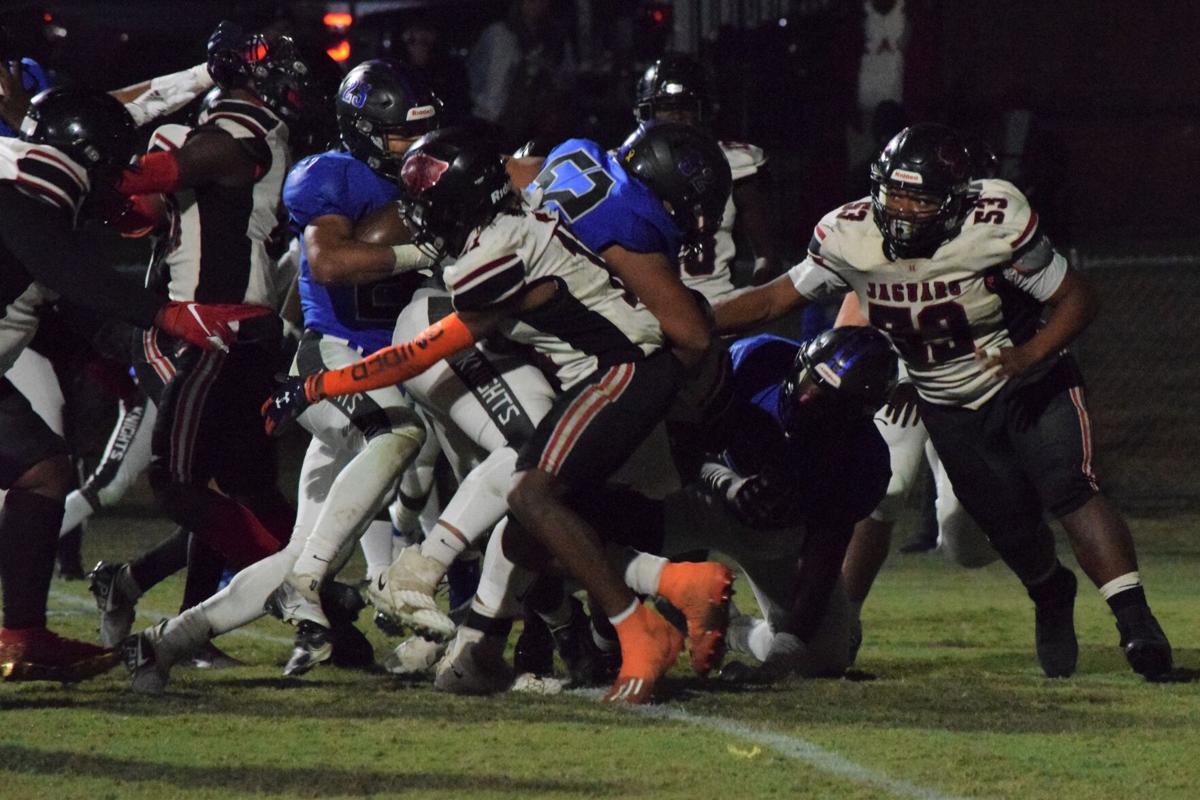 Catholic tailback Jeremiah Cobb is stacked up at the goal line by the Hillcrest defense. 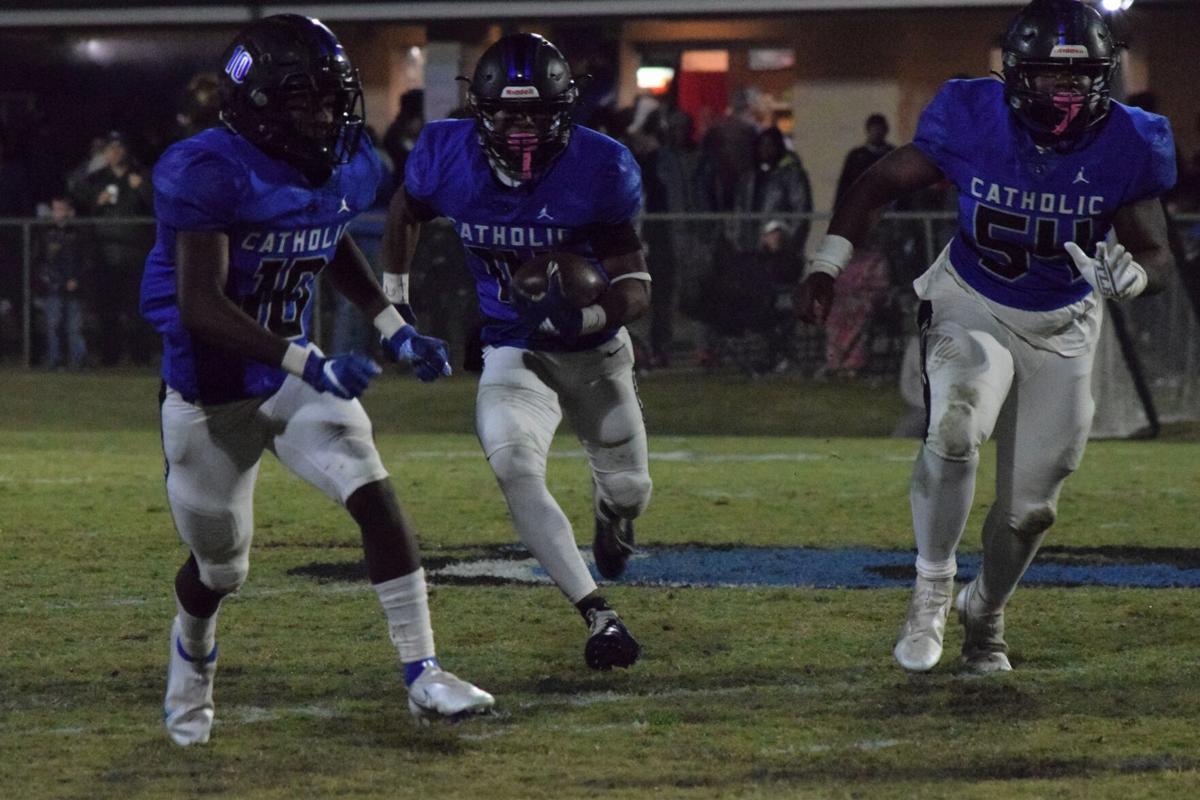 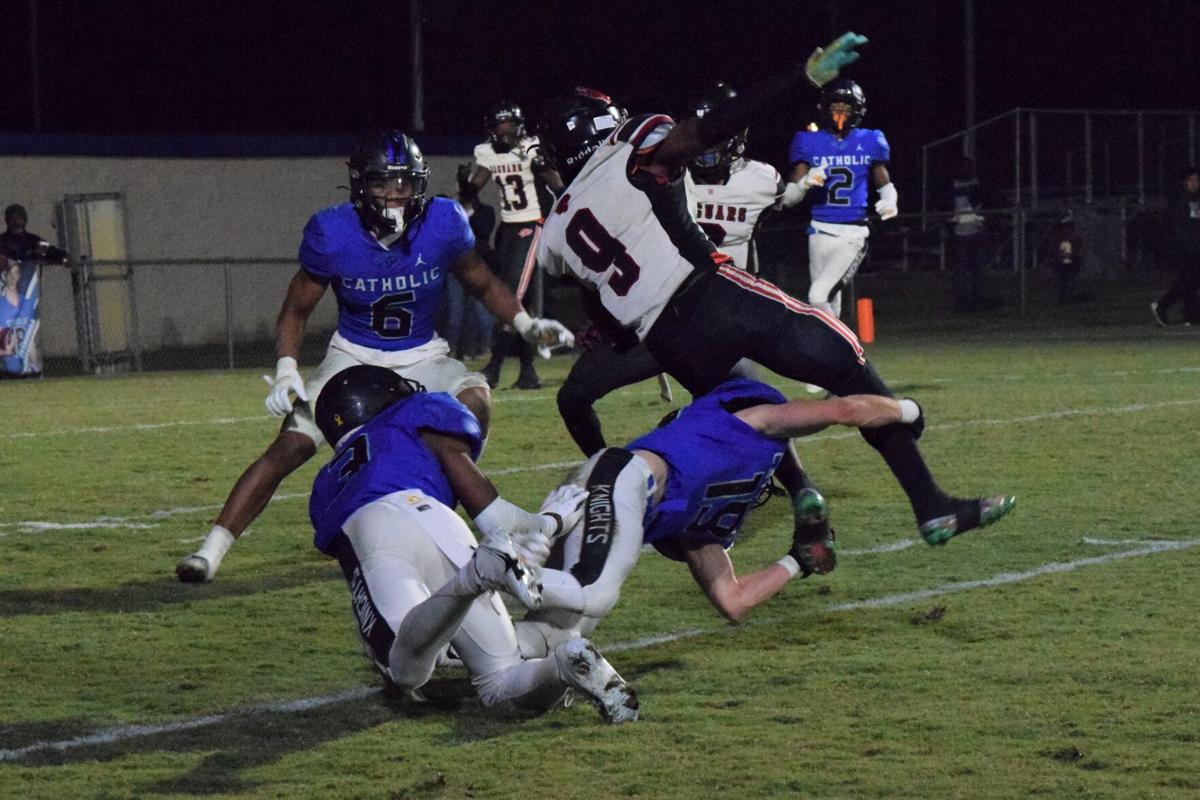 Hillcrest's Jalen Likely (9) is upended by Catholic defensive back Will Belsterling (19) after short reception in Friday's game. 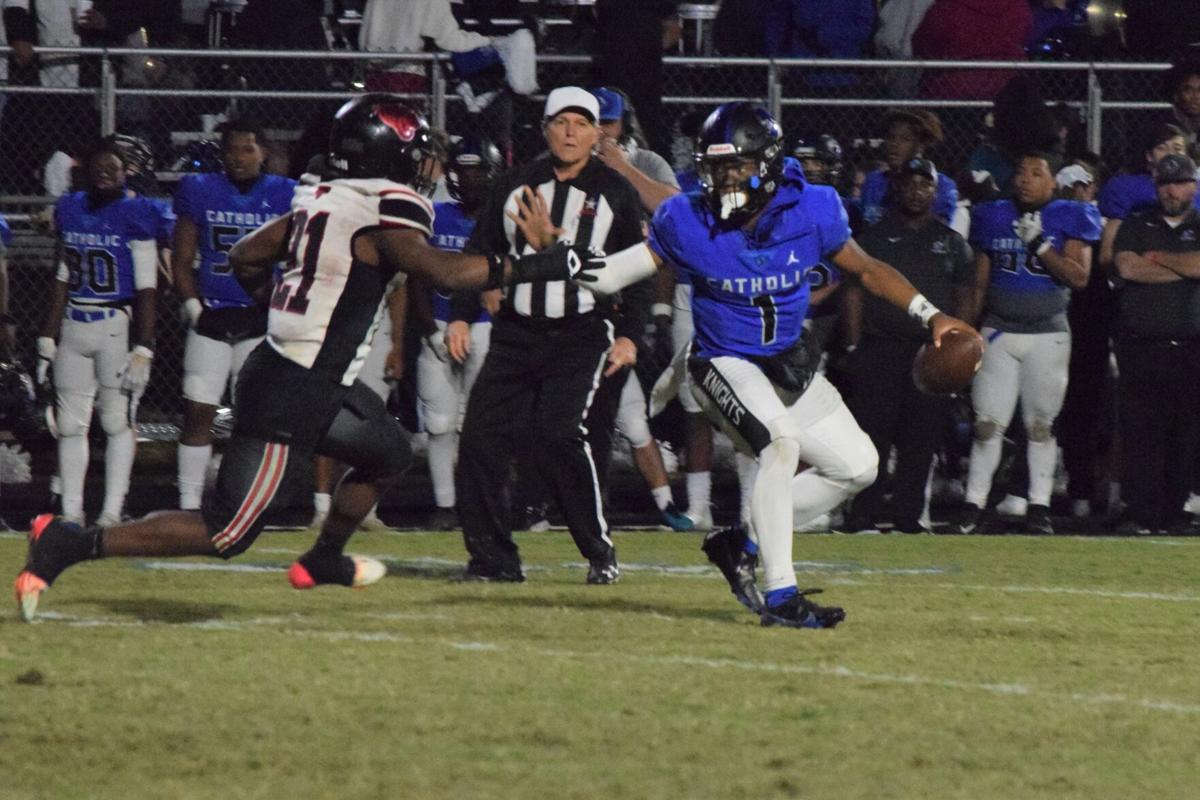 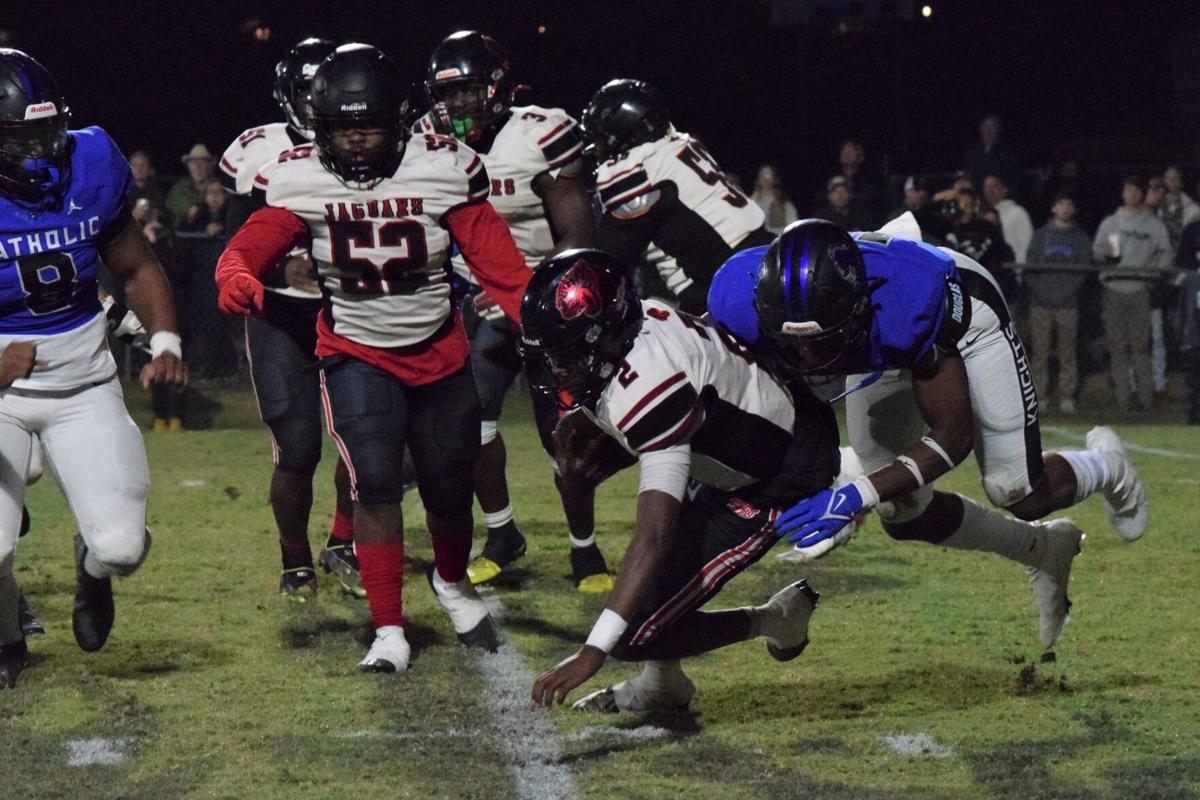 Hillcrest running back Willis Likely is picked up and dumped by Catholic linebacker Zach Underwood.

Catholic tailback Jeremiah Cobb is stacked up at the goal line by the Hillcrest defense.

Hillcrest's Jalen Likely (9) is upended by Catholic defensive back Will Belsterling (19) after short reception in Friday's game.

The end result looked a lot like any other Catholic victory this season, but the Knights found themselves locked in a physical battle for much of Friday’s quarterfinal matchup with Hillcrest-Evergreen.

The Knights held the Jaguars to 164 total yards and just a pair of first downs in the second half on the way to a 41-6 victory that propelled Catholic into the 3A semifinals for the second consecutive year.

Catholic (13-0) will play host to Montgomery Academy (10-3) next Friday in the semifinals for the second consecutive year, having defeated the Eagles in overtime last year to reach the 3A finals.

“It’s huge,” Catholic linebacker T.J. Dudley said. “Nobody else is playing in the city. It’s going to be a huge game, but this is what we’ve been waiting for.”

Catholic defeated the Eagles 42-0 earlier this season in a Sept. 24 meeting at Catholic.

“It’s always fun playing against MA,” McCreary said. “They’re always a good, well-coached team. But I feel like we can go out and get the job done again.”

And Catholic did exactly what they’ve done in 12 previous games on Friday, but the 13th victory was a little harder to reel in. The Jaguars were a physical team, holding Catholic to a 3-0 lead for much of the first quarter before Justin Rose pulled in a quick pass from McCreary and sprinted 43 yards to the end zone for a 10-0 lead with 14.9 seconds left.

Two possessions later, Jeremiah Cobb was stacked up at the goal line, but officials ruled he earned the final yard for a 17-0 lead. The Knights turned the ball over on their next possession, but Dudley’s 34-yard interception return for a touchdown atoned for the miscue and gave Catholic a 24-0 lead.

It was Dudley’s fourth interception return for a touchdown this season.

“I got to my landmark and saw the receivers were a little deeper,” Dudley said, “and I was reading the quarterback’s eyes. I saw it coming in and it was mine. I told my coaches, every time I land on my feet and I’ve get a pick, I’m going to score.”

The quick strike by Rose and the Dudley return have been the trademark of Catholic football all season and helped offset a physical battle that turned chippy early and involved a lot of pushing and shoving throughout the game.

“I think we finally overcame a little adversity,” Catholic coach Kirk Johnson said. “It’s been a while since we’ve been in a battle like that. But you look up and it’s 41-6 before you know it. We’ve got to continue to do what we do. It’s not about what anyone else is doing, it’s what we’re doing.”

Hillcrest (7-6) picked up half of their total output on the drive following Dudley’s interception, marching 80 yards in 12 plays, scoring on Jermonte Stallworth’s quarterback sneak with 4.1 seconds left.

“That drive right before half was not Montgomery Catholic,” Johnson said. “That was a team that thought they had made it, a team that got a lead and got comfortable and that’s on us coaches for allowing them to do that. We have to be better when it comes to stuff like that. We challenged them at halftime and you saw the difference when we came out at half.”

Because Hillcrest got the opening kickoff of the second half, the last-second touchdown could have been a huge momentum swing for the Jaguars. Instead, the Catholic defense held Hillcrest without a first down and to 10 total yards in the third quarter while the offense got a field goal from Callan Gadilhe and another touchdown from Cobb for a comfortable 34-6 lead.

“Honestly, they didn’t do anything we didn’t expect them to do,” Dudley said of the Jaguars’ late first-half drive. “They just switched it up and ran a little power. They responded really well, but when we came in at halftime, we adjusted to that. That was the main focus after Coach got on us for giving up the touchdown, coming back and responding. We can’t come out and give up another touchdown.”