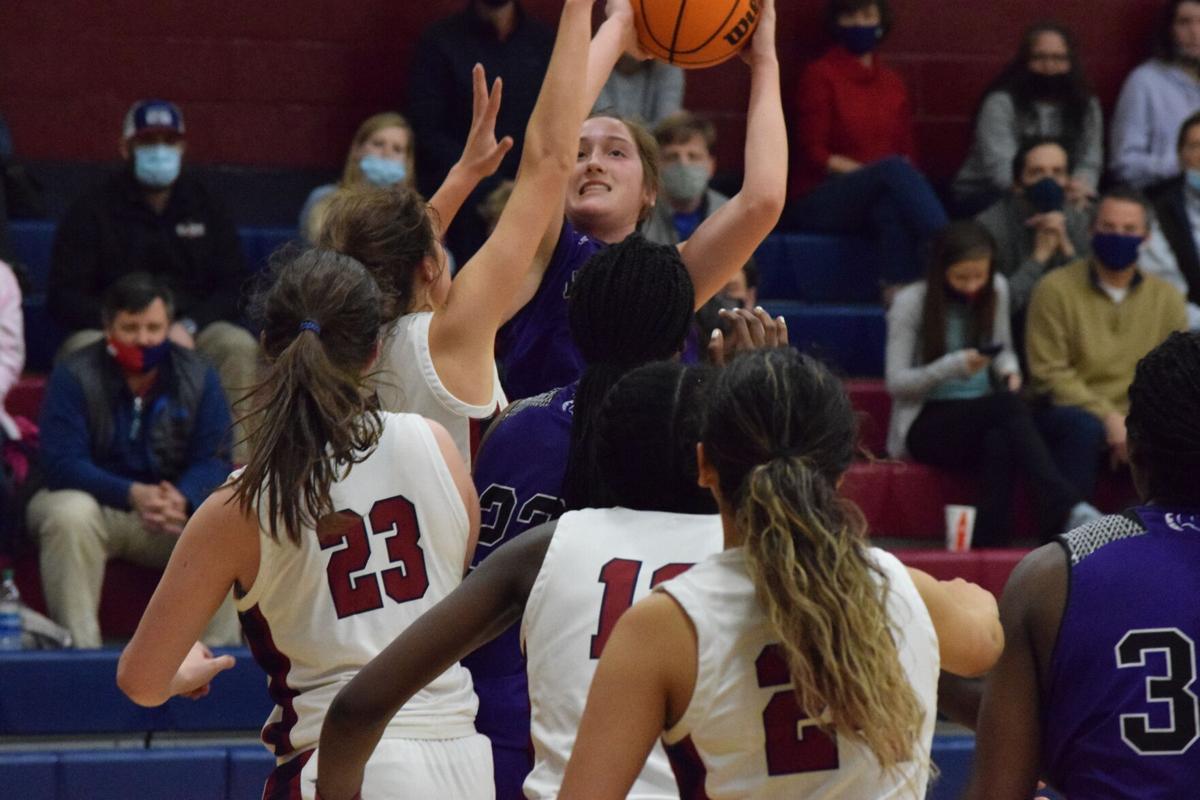 Prattville Christian Academy's Ella Jane Connell shoots over Montgomery Academy's Leighton Robertson in the second half of the 3A Area 6 tournament championship game. 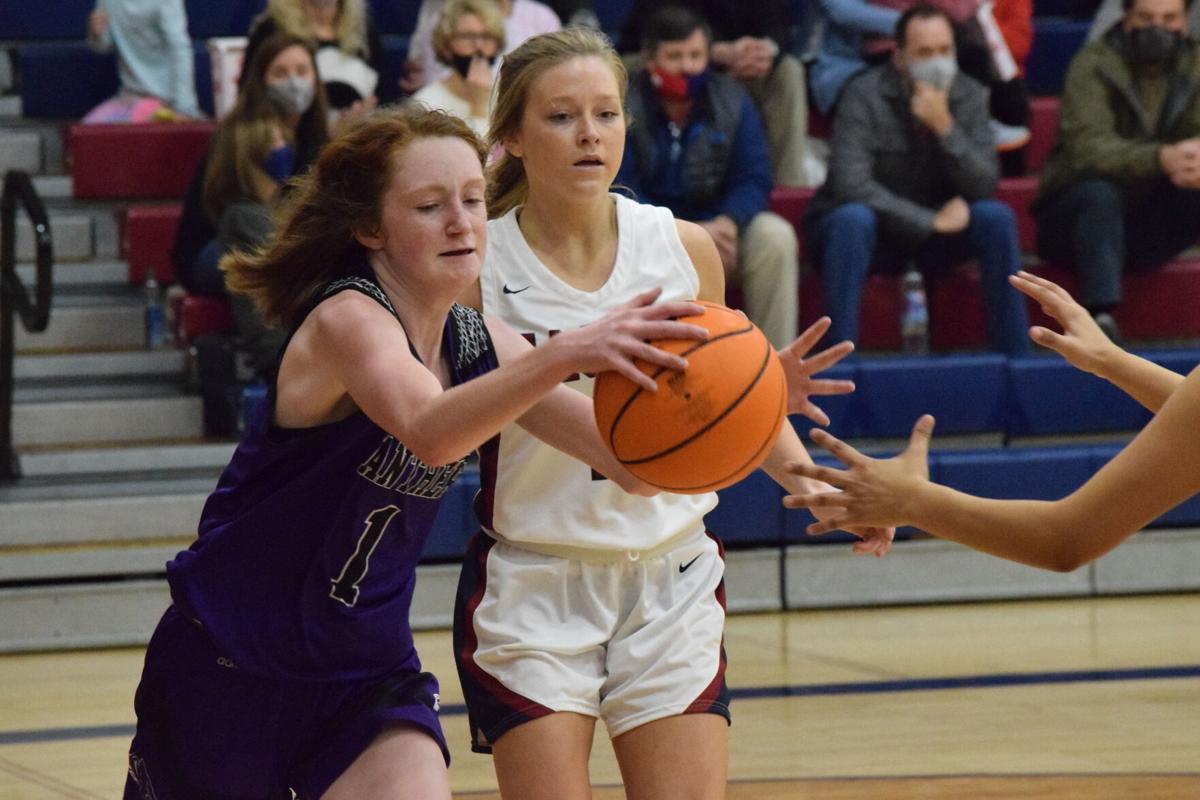 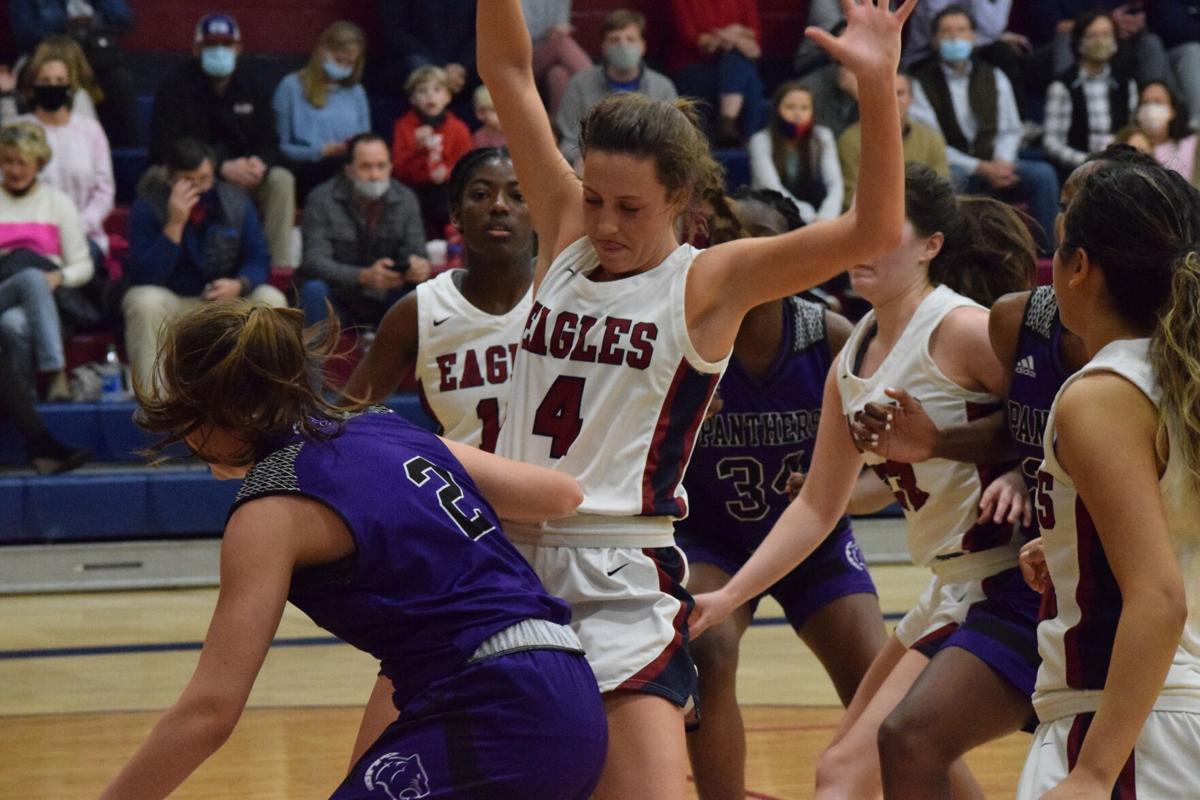 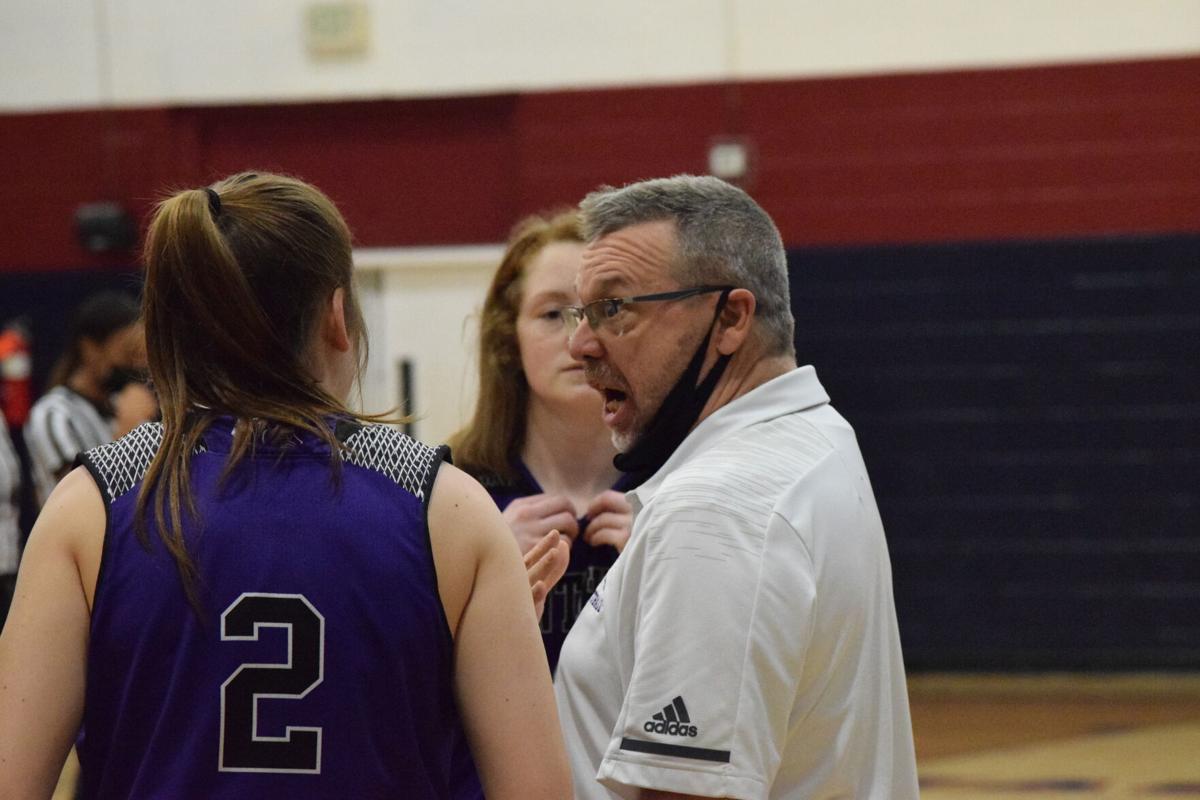 Prattville Christian Academy's Jim Graham, serving as the head coach in place of the quarantined Jason Roberson, talks to the players before the tipoff of Friday's game at Montgomery Academy. 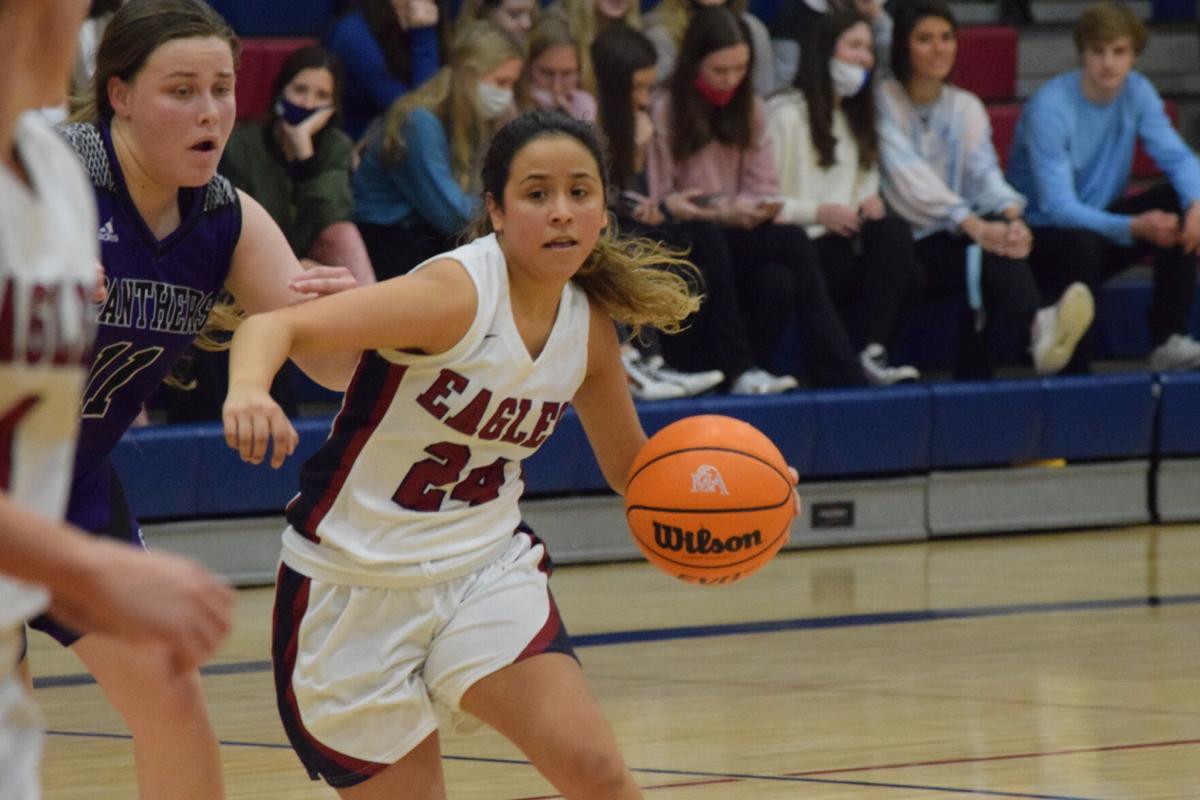 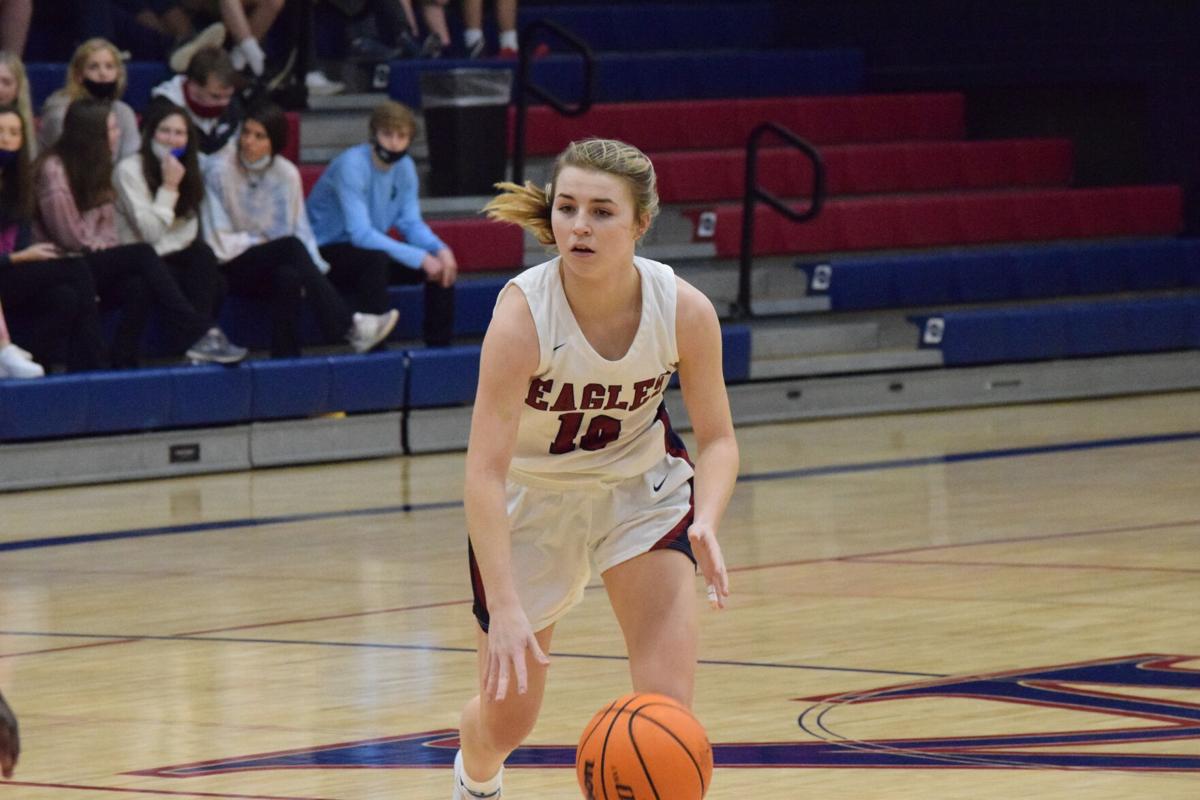 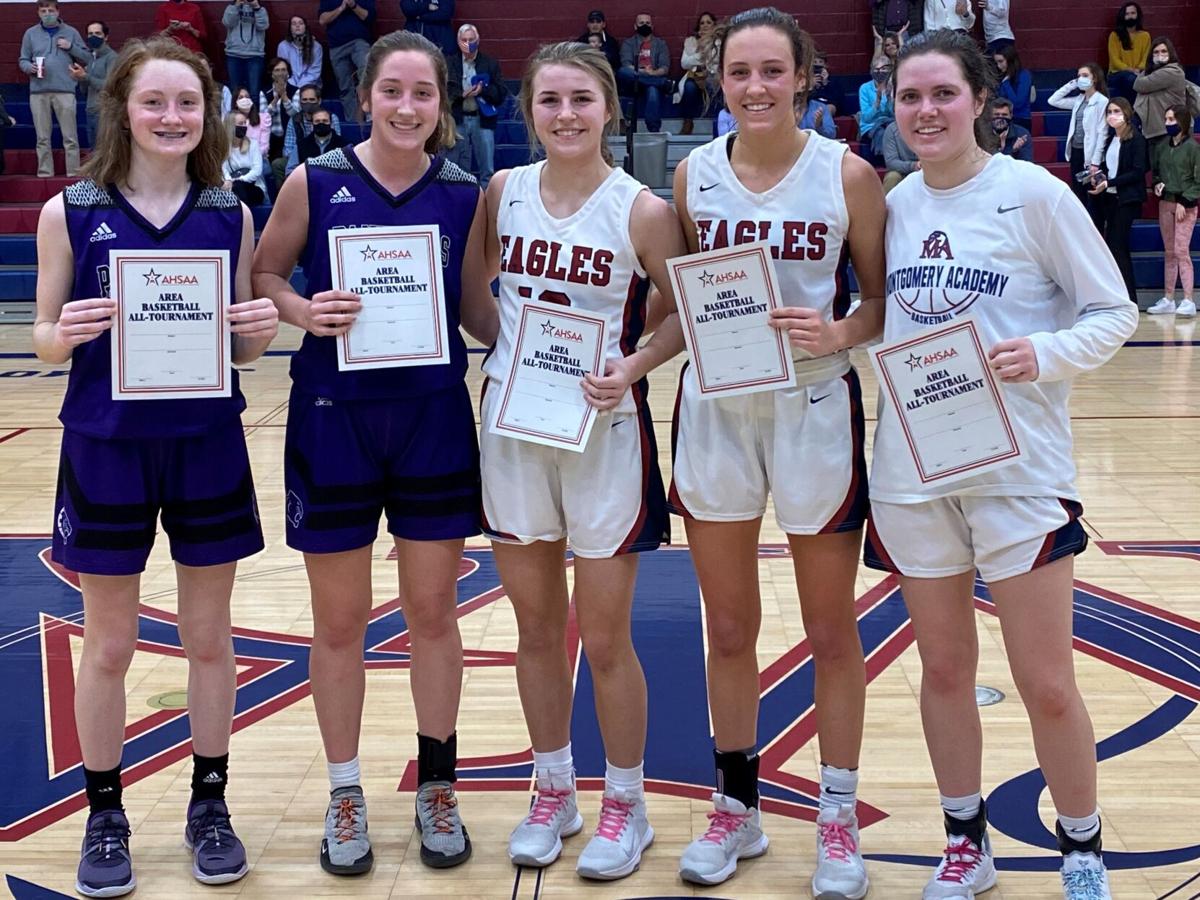 Prattville Christian Academy's Ella Jane Connell shoots over Montgomery Academy's Leighton Robertson in the second half of the 3A Area 6 tournament championship game.

Prattville Christian Academy's Jim Graham, serving as the head coach in place of the quarantined Jason Roberson, talks to the players before the tipoff of Friday's game at Montgomery Academy.

The fifth meeting of Prattville Christian and Montgomery Academy, this time in the 3A Area 6 tournament finals on Friday night, was missing something.

Two of the four previous meetings had been decided on the final possession by free throws. All were intense physical battles. The fifth one, like the previous four, was a championship-caliber battle between two of the best girls’ basketball programs in the state.

But whether it was the absence of PCA coach Jason Roberson, still quarantined for COVID contact tracing, or the fact that MA had won the previous four games, something was missing from the Panthers on both ends of the floor in the early moments of the game.

“I asked every girl, on a scale of 1-10, tell me how hard you played in the first half and how hard you played in the second half,” PCA assistant coach Jim Graham said. “Every single girl, on their own, gave me a rating of 3 or 4 in the first half and anywhere from 6 to 9 in the second half. So I explained to them that we’re really good and there are a lot of teams where you can do that and win. But not this team. They’re older, they’re more mature and we’re younger and haven’t learned to play at the level required for the length of time it’s required.”

Montgomery Academy spanked PCA early, grabbing a decisive 17-point lead at the half and holding off a late Panther rally for a 61-54 victory at MA’s Joe Mooty Court.

“I think we definitely got in their heads at the beginning of the game,” said MA senior Leighton Robertson, the tournament’s most valuable player. “We started off strong and that was part of our plan. We wanted to start out physically and mentally stronger than they were and I think we took it to them.”

“Madi shot it really well in the first half and that always makes a difference when you can hit some 3s,” Montgomery Academy coach Reg Mantooth said. “I don’t know if they were planning for that or not, but they were playing Gabby (Ramirez) really tight so it opened it up for Madi to hit some big shots.”

Caddell was 6 of 8 from the floor in the first half, scoring 18 points. She was 0 for 8 in the second half with three turnovers, but the damage was already done.

“We didn’t do what we were supposed to do,” Graham offered. “I don’t think they focused in film session, which is another maturity thing.”

“We have such a deep team that you can cover someone but another person is just going to step up,” Robertson said. “So there’s not much you can do because all of us are capable. No matter who you cover, someone else is going to step to the plate.”

Robertson’s defense on PCA’s leading scorer, Ella Jane Connell, was solid, just as it had been in the previous four meetings. But with Caddell struggling in the second half, Robertson also picked up her offensive game, scoring 13 of her 15 points in the final 16 minutes as the Panthers staged a comeback.

“We knew they would come out and press us and try to get back in the game and I actually thought we did a pretty good job of handling the press,” Mantooth said. “We had some unforced turnovers where we traveled a couple of times, but then they shot it very well in the second half and that allowed them to get back in the game.”

Avery Rogers, who scored the game’s first basket on a 3 pointer, hit three more in the second half and Connell scored 12 of her 19 points in the second half as the Panthers drew within seven, but a three-point play by Chloe Johnson and a pair of Ann Cobern Chapman baskets helped the Eagles push the lead back out to 12 points and regain control of the game.

“I think when it gets close like that, for some teams it will get them down but for us it just motivates us,” Robertson said. “Like, it’s go time, we’ve got to finish this strong. When it starts getting close, we’re trying to make up for it and outhustle and at the end I think that’s what we did and were able to finish strong.”

Caddell led the Eagles with 18 points, followed by Roberson with 15 points, six rebounds and six assists, Chapman with 11 points and four rebounds and Johnson with eight rebounds, five assists and two steals to go along with six points.

Connell had 19 points and four assists, followed by Hannah Jones with 13 points and 12 rebounds, Rogers with 12 points and six rebounds and CoCo Thomas with seven points and nine rebounds.

“They’re a really, really good team,” Mantooth said. “We’ve been fortunate to win. We just tried to play as well as we could, understand they’re not going to go away and we have to play well to beat them.”

Two more wins and the pair will meet for a sixth time in Garrett Coliseum in the Southeast Regional finals with a trip to the state tournament in Birmingham on the line.

“All we can hope is that we do what we need to do and win two more ballgames,” Graham said, “and play them again.”