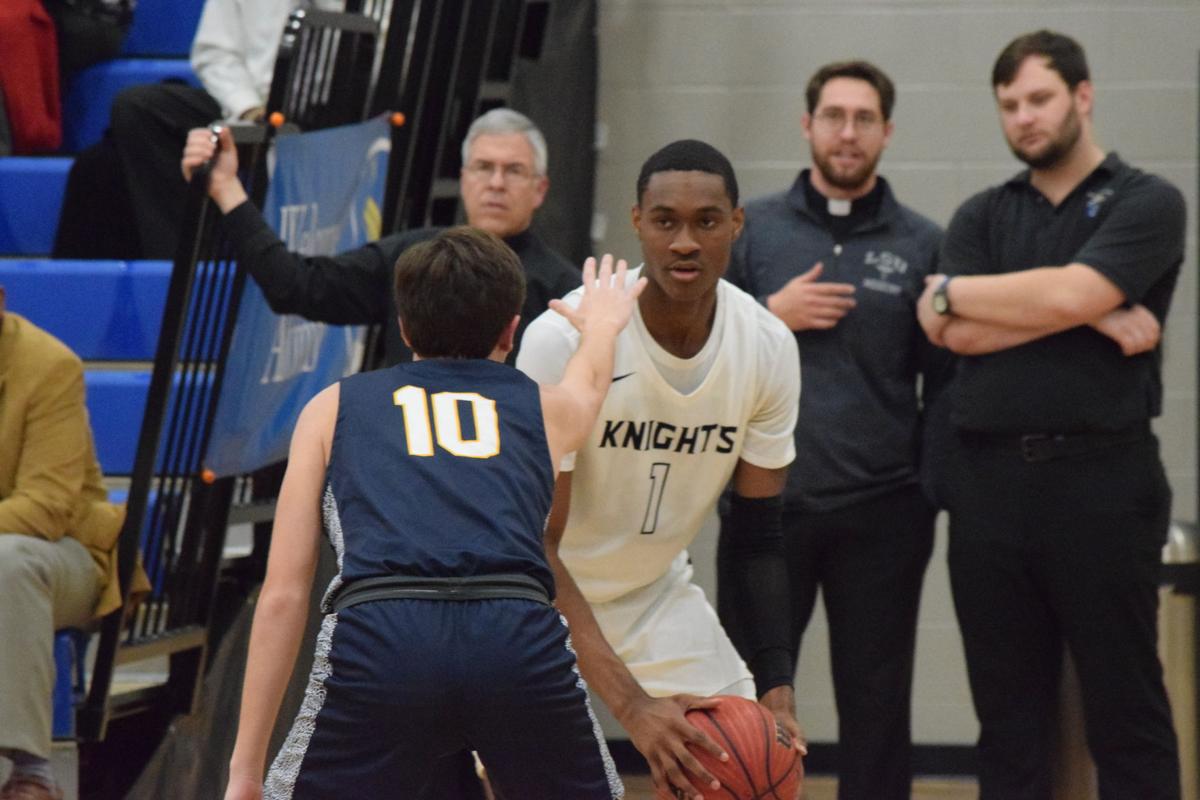 Catholic's Justin Bufford eyes shot over the defense of St. James' Will Carter. 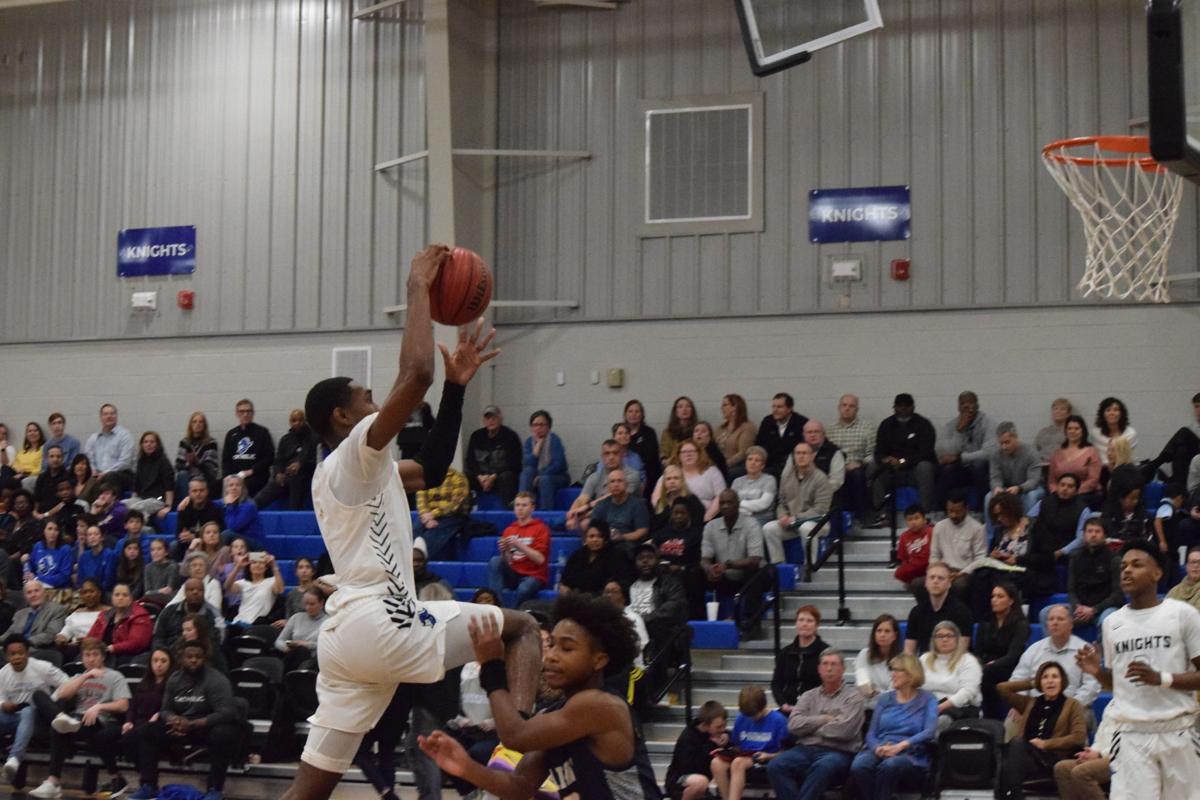 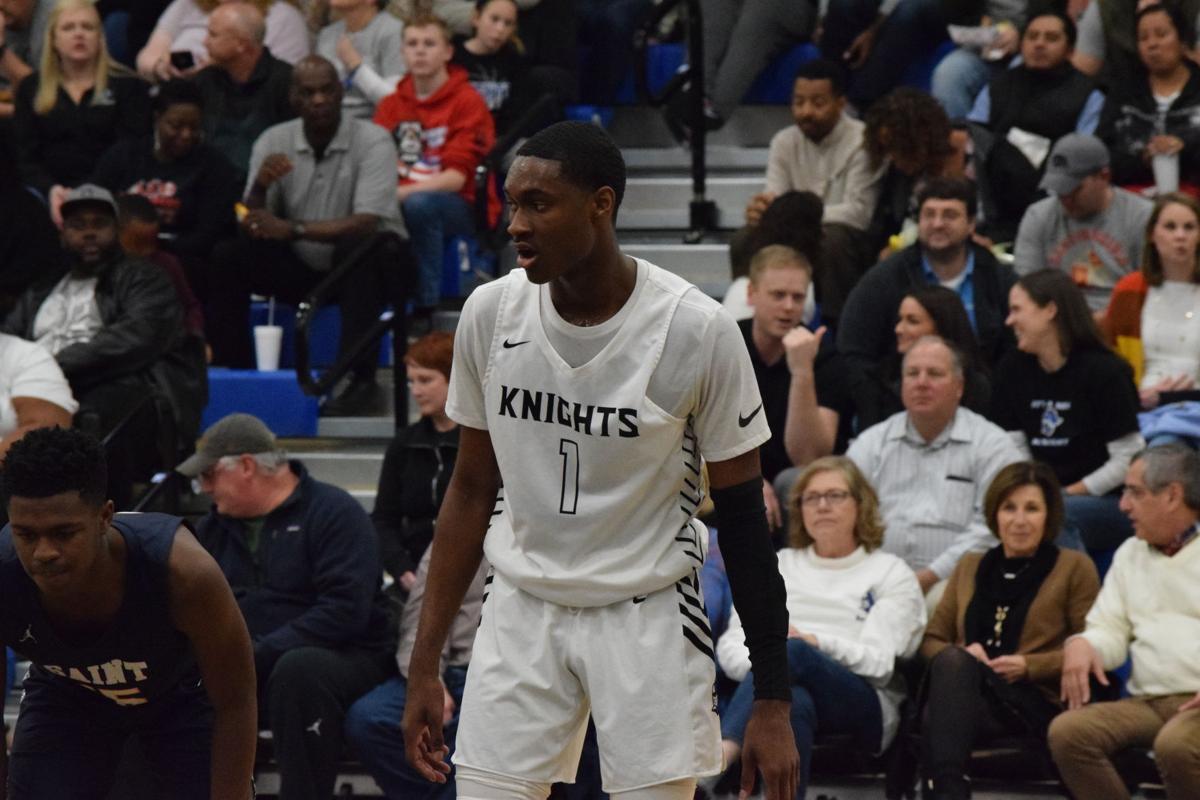 Bufford averages 10.7 rebounds per game, many of them coming off of missed free-throw attempts. 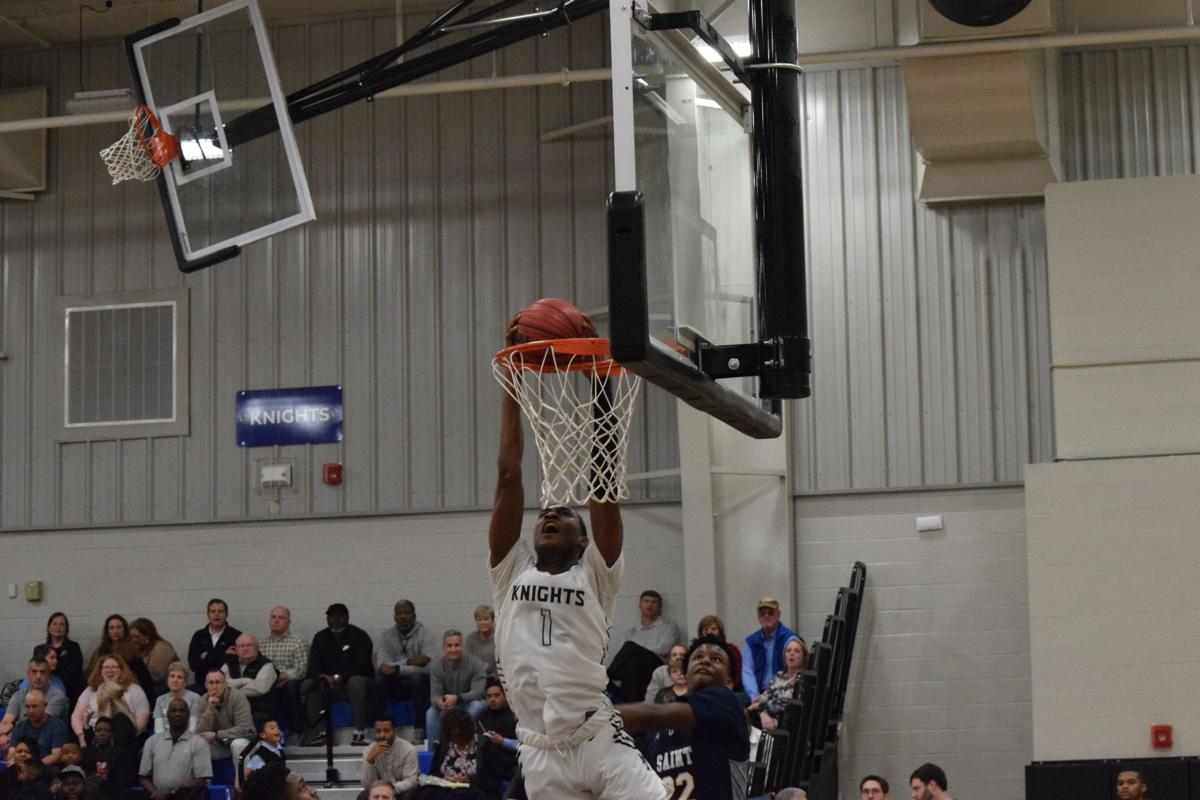 Bufford gets the fans -- and his teammates -- involved in the game with his crowd-pleasing dunks. 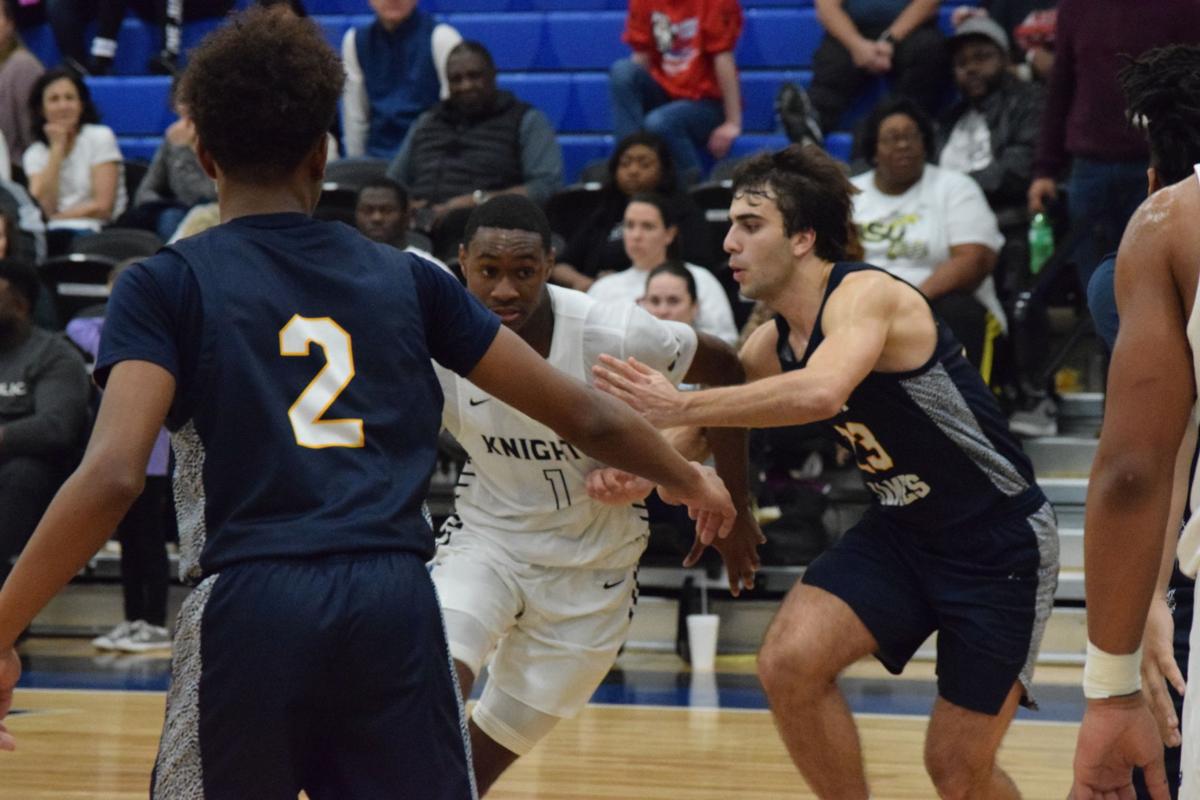 Justin Bufford drives through the St. James defense for another basket in last week's matchup.

Catholic's Justin Bufford eyes shot over the defense of St. James' Will Carter.

Bufford averages 10.7 rebounds per game, many of them coming off of missed free-throw attempts.

Bufford gets the fans -- and his teammates -- involved in the game with his crowd-pleasing dunks.

Justin Bufford drives through the St. James defense for another basket in last week's matchup.

It’s been a little more than 20 years since a transfer named Ousmane Cisse arrived at Catholic and transformed the Knights into a championship contender.

The drought may be over, thanks to another transfer who arrived at Catholic this fall and transformed the Knights into a championship contender.

And while Justin Bufford is nothing like Ousmane Cisse in physical attributes, both have one thing in common in addition to their decision to transfer to Catholic: Bufford, like Cisse, is a matchup nightmare for opposing teams.

“Basically, he’s a ‘three’ (wing) player in this league and he can shoot the ball outside, put the ball on the floor and go make plays and is very athletic,” St. James coach Nigel Card said. “He has more length and skills than most of the players he’ll be playing against so he’s able to take advantage of his length, his ball skills and once he shoots a jump shot, he’s hard to reach because he’s got long limbs. He’s a very good player. He has a chance to be a good player down the road (at the collegiate level).”

The road to a championship started for Bufford over the summer. He had excelled as a three-year starter at Ellwood Christian in Selma, but thought he could accomplish more at a bigger school.

“It’s been a real journey,” Bufford said. “Leaving somewhere I had been for so long, I loved that place, I loved my old school, but you have to want better for yourself. I wanted to get to a better space mentally and physically. It was a choice I made to myself. I wanted to leave my old school and looked at some schools that I had an interest in.”

It wasn’t an easy decision. He had excelled as the best player on a small 1A private school team, but he felt he should spend his last year in high school at another school, not certain how he would fit in.

“Being honest, all I did was pray about it, talk to God,” he said. “He showed me the best path to take.”

That path led to Catholic.

“You know how you just have that gut feeling?” Bufford asked. “It was a feeling I had when I walked in, how they greeted me, how the guys accepted me and how Coach (Mike) Curry treated me. I wasn’t even here, but I felt like I was here, the way they treated me.”

The Knights returned the leading scorer and most of the top players from last year’s team that finished as the runner-up in the area to LAMP, won the area tournament and advanced to the sub-regional round. Yet Bufford stepped right in at a new school and became the inspirational leader of the Knights, quickly acclimating himself to his new surroundings.

“I’ve got to give credit to the guys,” Bufford said. “Those are my brothers. I love those boys to death. I felt like I had known them my whole life.”

And while Curry may have brought a little more discipline to Bufford’s game, he was careful not to change too much in his senior’s personality on the court.

“We want him to be who he is, within the context of the team,” Curry said. “He’s a scorer by nature. We let him have his free reign within the context of the team. He’s leading us in rebounding, probably second in assists, but I tell the guys all the time, ‘James Harden shoots the ball more than Patrick Beverley does.’ Everybody needs to star in their role and we want him to be a scorer for us.”

They lost a pair of games in their first tournament of the season – the win by 5A Carroll was later forfeited for the use of an ineligible player – but over Catholic’s last 20 games, their losses to 4A Oneonta, 5A Brew Tech and 7A Robert E. Lee are generally a sign of larger up-tempo teams that through depth or talent can negate some of Bufford’s advantages.

“He can play all five spots, he can guard all five spots,” Curry said. “Block shots, rebound, handles it, distributes it. He’s really been good for us.”

Catholic is 25-4 and Bufford leads the team in scoring at 22.2 points per game, rebounding at 10.7 rebounds per game and blocked shots (3.7 per game). He also ranks first in free-throw shooting at 67 percent.

“I’m a floor general, scorer -- I think I have more than one role – leader,” Bufford said. “But the main thing is, I’m going to do whatever I have to do to win games.”

A lot of times, his work is on the defensive end, often unnoticed by fans.

“He plays good ‘D’ when he wants to,” Curry said. “He gambles a little too much, but he’s very capable of getting down in a stance and guarding. Part of that is on us. I tell him I want him to be aggressive on defense because we want to get out in transition and run.”

Curry hears that part of the message. Playing good defense and coming up with steals often results in baskets on the other end of the court.

“Playing defense, that’s what really wins games,” Bufford said. “Scoring the ball, if you’re playing basketball the right way, is going to come. Then, (my favorite part of the game is) the assists. I want to get the guys involved. That makes it fun. That’s what makes us us.”

Bufford may sound unselfish, but he’d rather give the ball to a teammate who gives it back for a slam dunk. That gets his teammates – and the Catholic students – into the game.

“I love the fans,” Bufford admitted. “You’ve got to love your fans and hype the team up. That makes the game interesting.”

The game is more interesting for Catholic fans than it has been in the last 20 years. Like those Cisse days, this is a Catholic team that has the potential to win a state championship and go as far as its new star will take it.

“We’re still a good team,” Curry said, when asked how his team might play if Bufford were injured or on the bench in foul trouble. “We’re going to need everybody. We were a good team before he got here but he can make us a great team.”

One that has dreams of playing in Birmingham.

“Being honest, from my heart, I think we can win the state championship,” Bufford said.