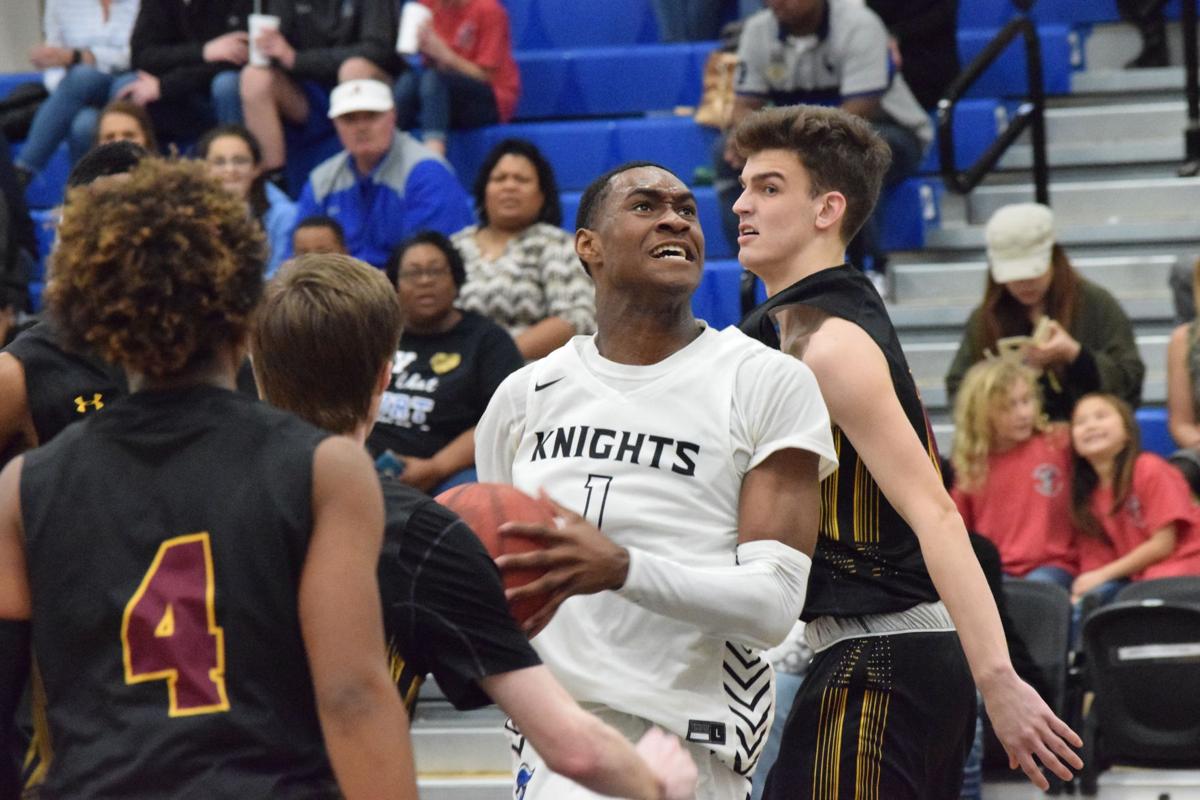 Catholic's Justin Bufford goes up for a shot in a crowd of LAMP defenders. 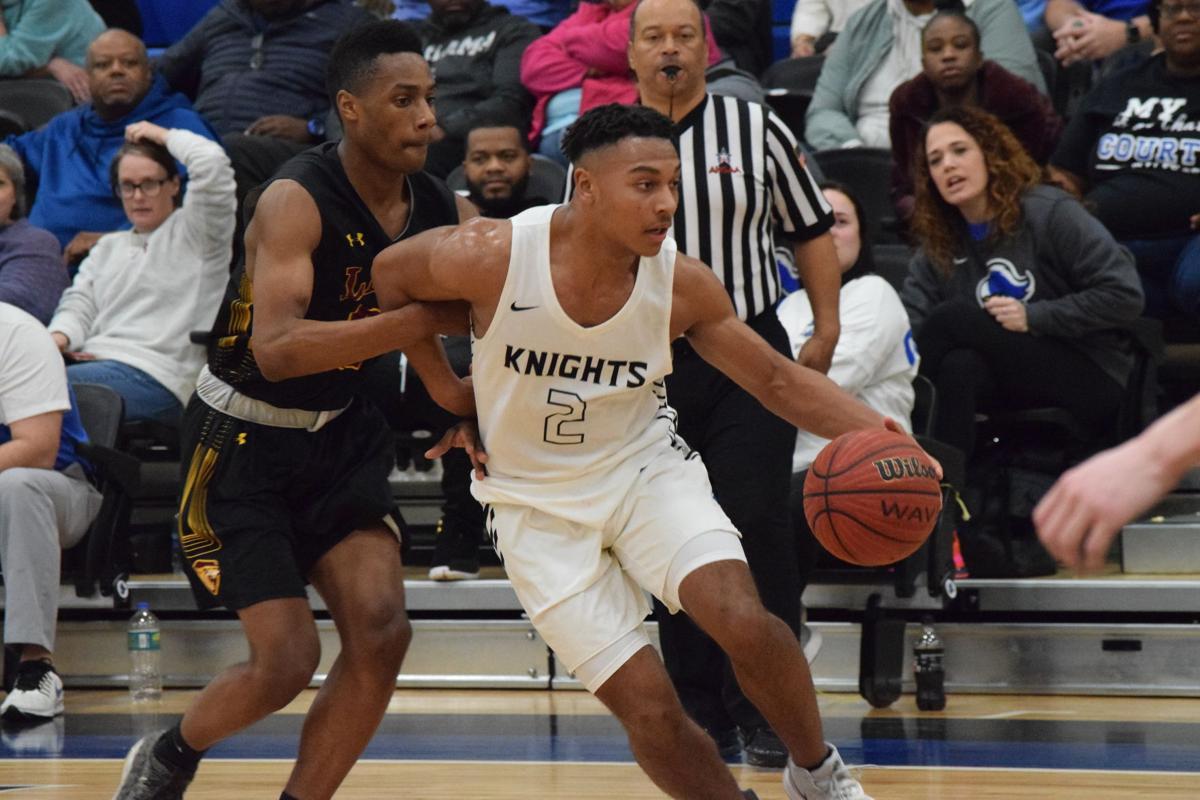 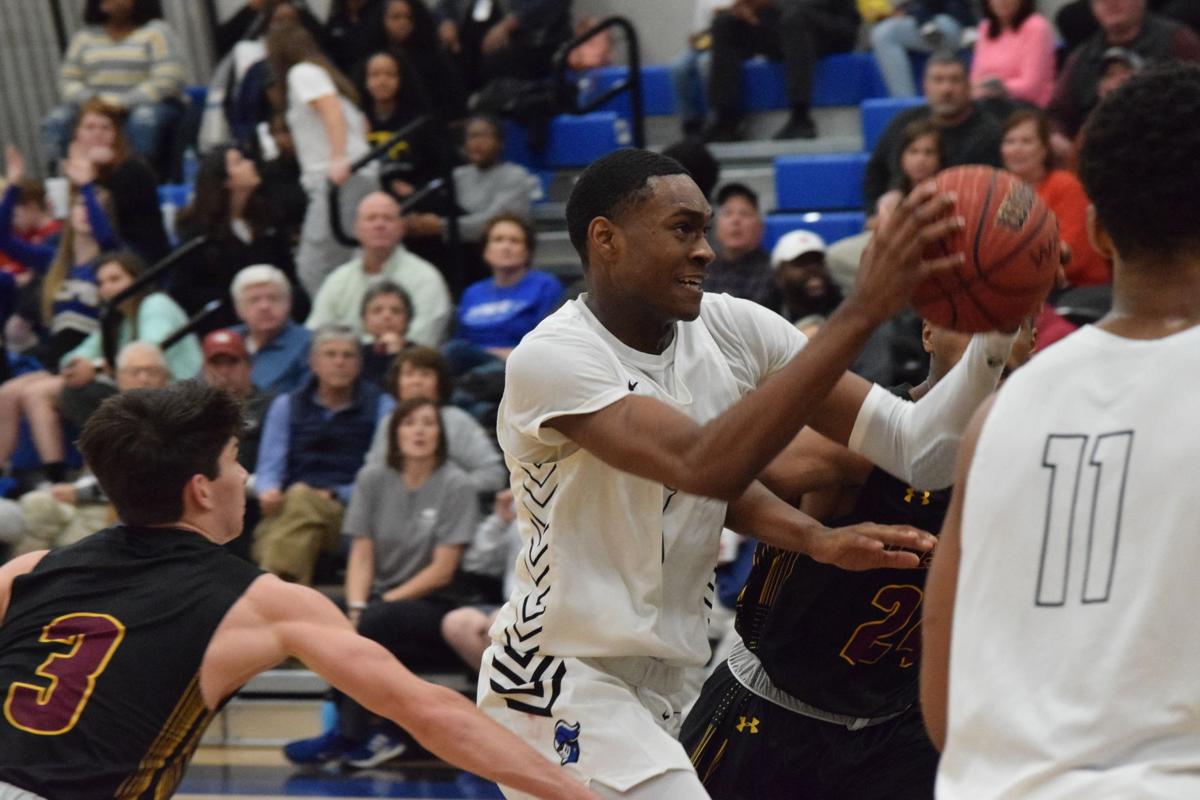 Catholic's Justin Bufford drives the lane for another basket. 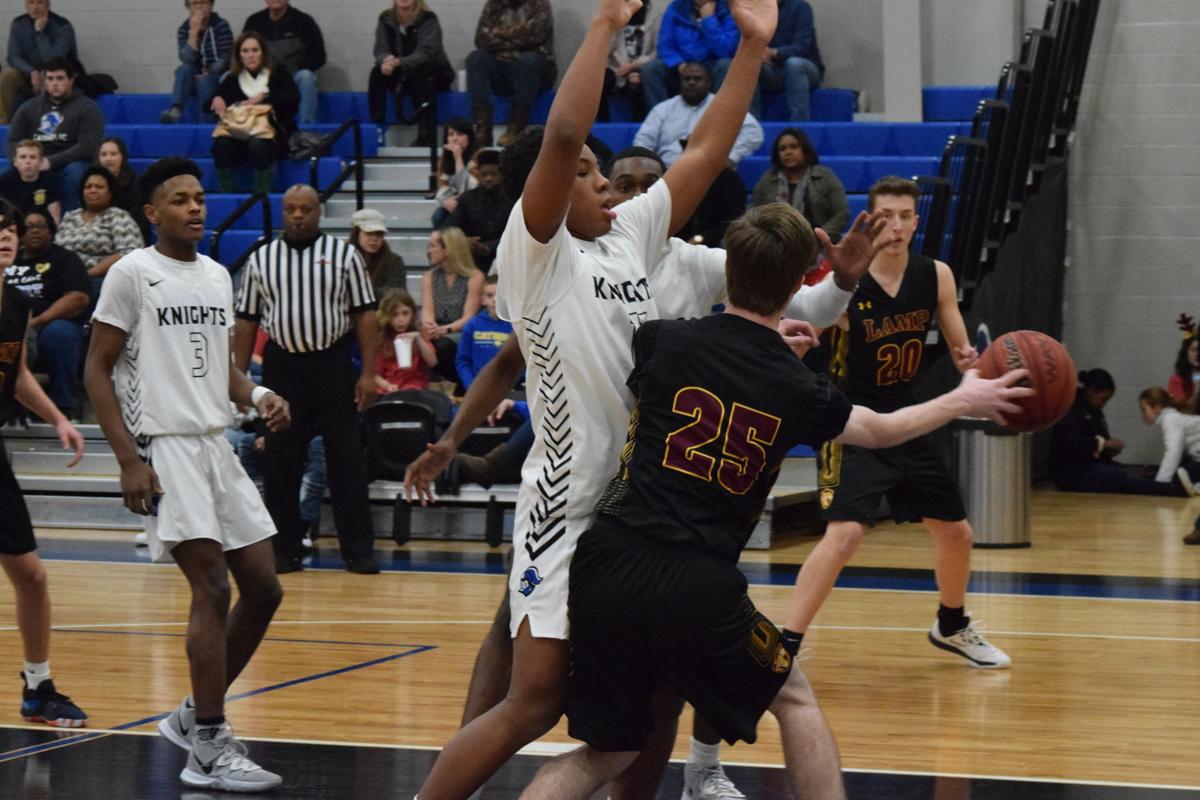 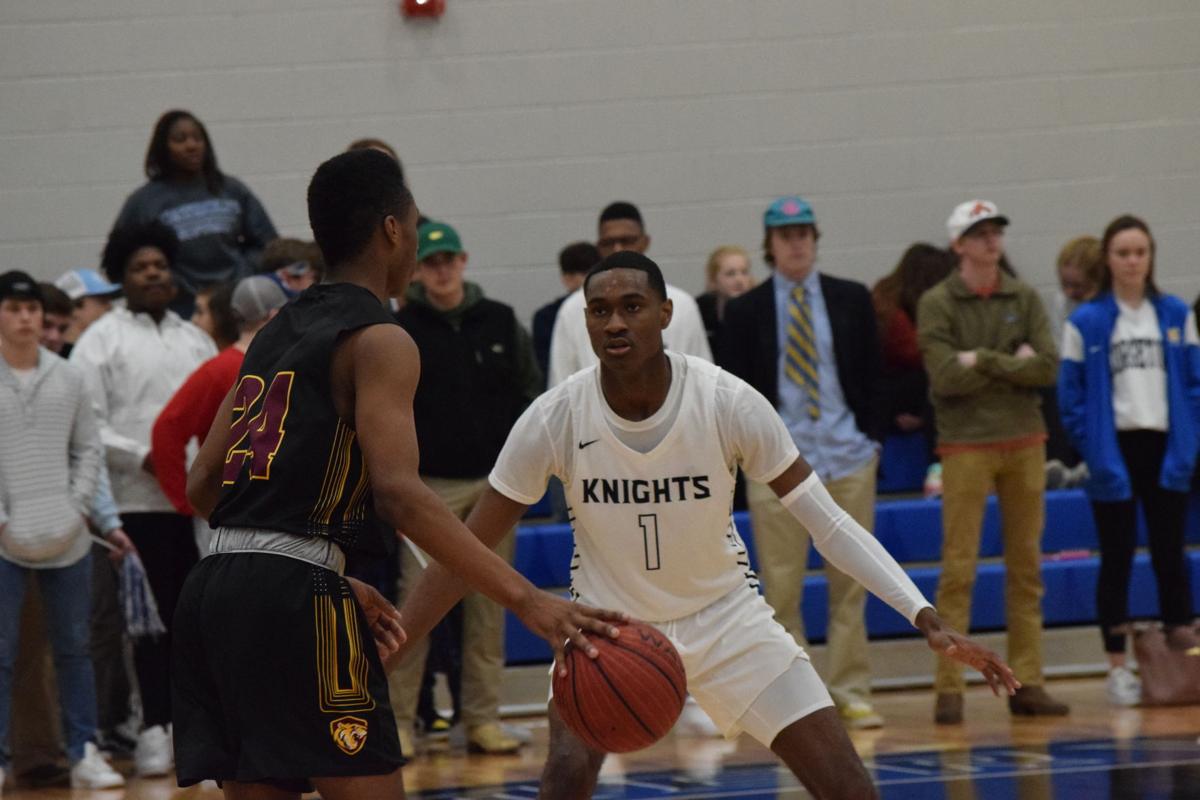 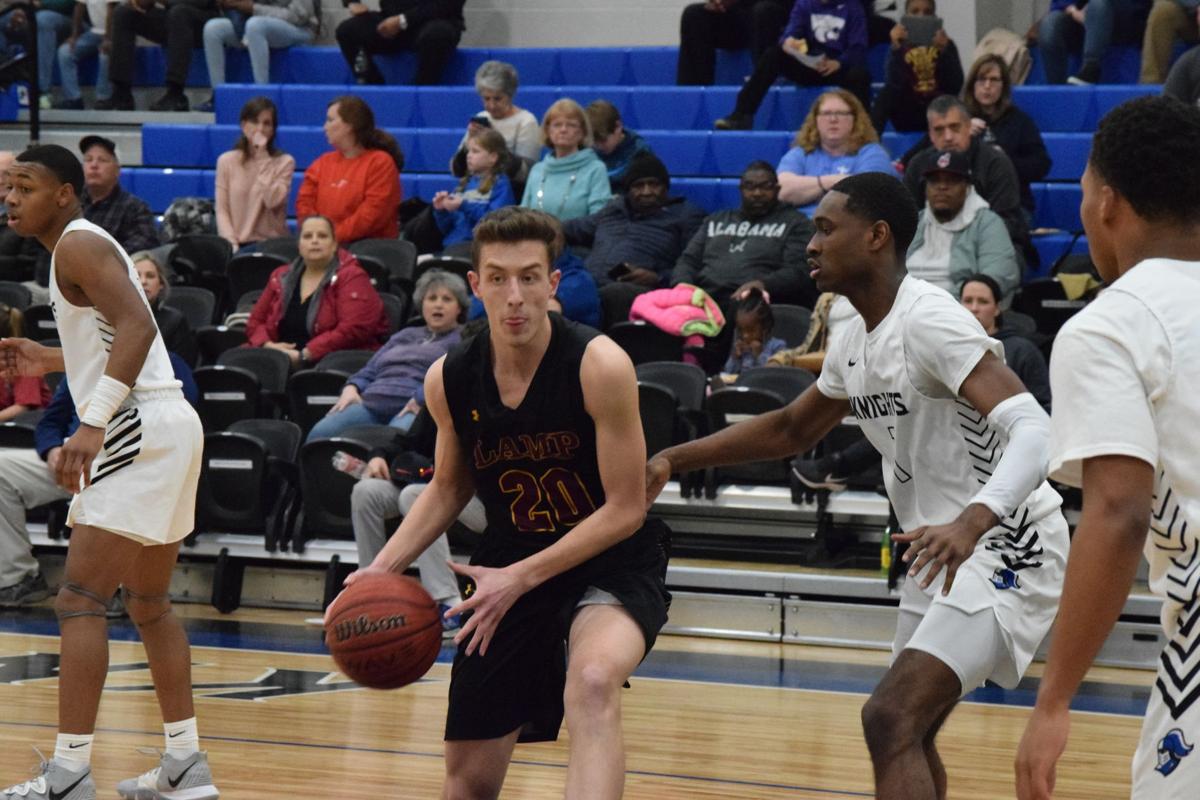 LAMP's Tyler Hoffman drives into the lane in an attempt to get by Catholic defender Justin Bufford. 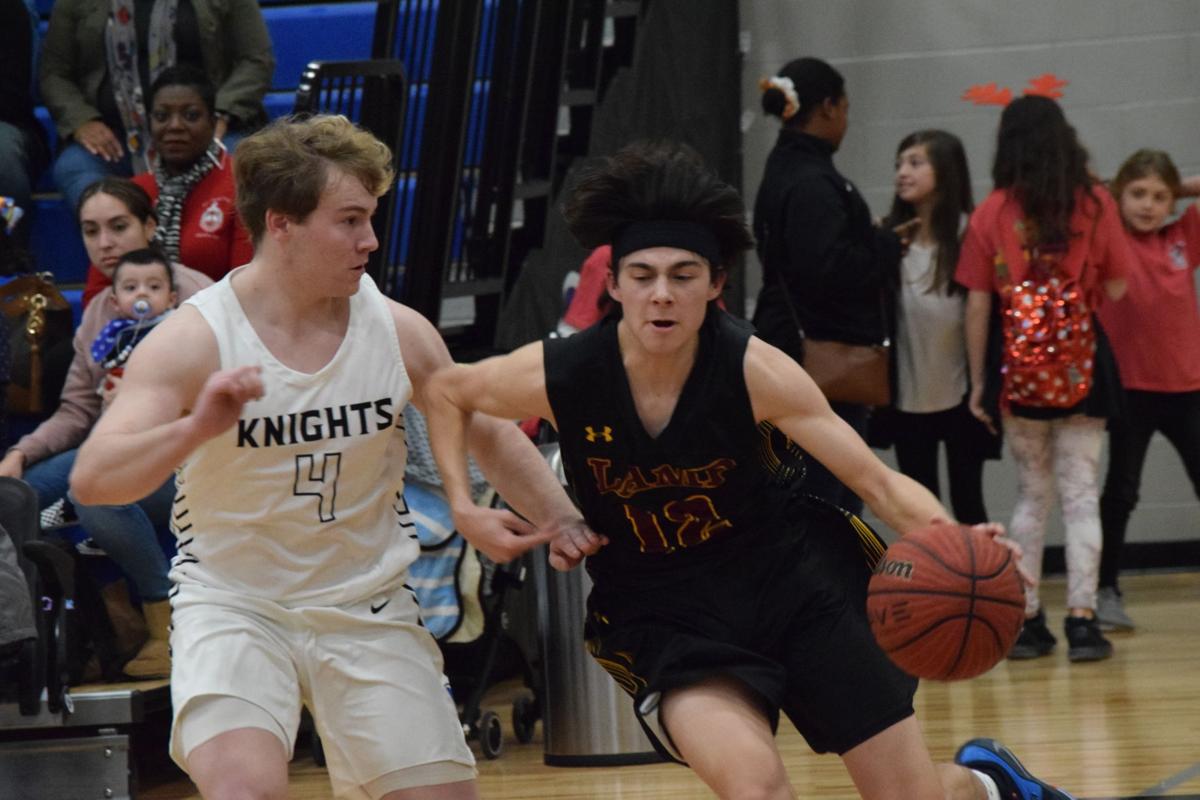 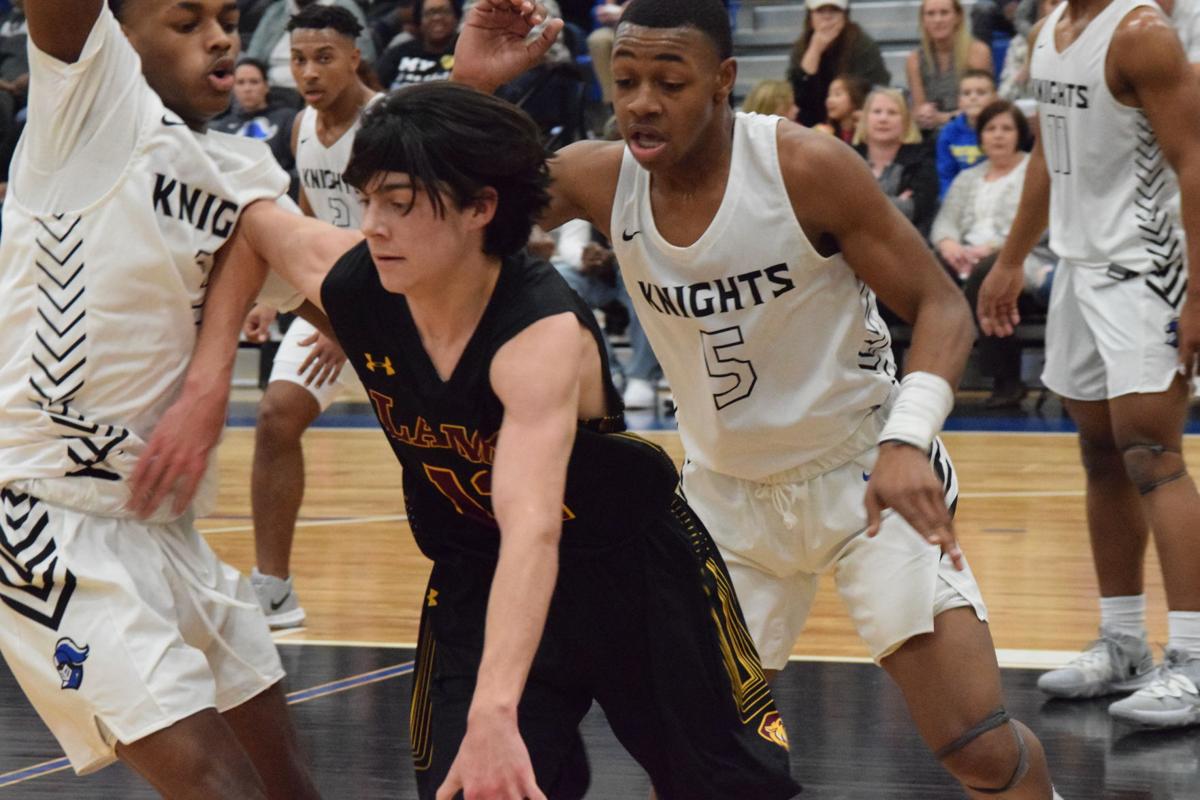 Catholic's Justin Bufford goes up for a shot in a crowd of LAMP defenders.

Catholic's Justin Bufford drives the lane for another basket.

LAMP's Tyler Hoffman drives into the lane in an attempt to get by Catholic defender Justin Bufford.

It was all Justin Bufford all the time.

After taking Catholic into overtime in their last meeting, the LAMP Golden Tigers hoped to use the lessons learned from that meeting to upset the Knights in the Class 4A Area 4 tournament finals in the Catholic gym on Friday night.

“They’re so athletic,” LAMP coach Marcus Townsend said. “We tried to push the tempo a little bit by going man-to-man but Bufford just kept putting it in.”

Bufford had nine of the Knights’ first 15 points, but the game was tied at 15-15. He had nine of their 17 second-quarter points, including the final points on a three-point play that gave Catholic a 32-27 halftime lead. As he increased his point total in the third quarter – scoring 13 points with the help of a pair of 3-pointers – the Knights increased the margin, taking a 14-point lead into the fourth quarter.

“We’ve got to make those runs, that’s kind of how we play,” Catholic coach Mike Curry said. “We had a couple of those in the third and stretched the lead out.”

Bufford’s presence wasn’t only felt on the offensive end of the court. LAMP held the upper hand in the first quarter with the help of Micah Boone and Curry responded by switching Myles Butler and Bufford and Boone was finished scoring, going the final 21 minutes without a point.

“We started out with Myles on him and Myles did a good job on him, then we switched over and put JB on him and put a little more length on him,” Curry said. “JB can guard one (point guard) through five (center).”

DJ Carter added 13 points, six rebounds, three steals and three assists and TJ Dudley had six points to go with his 11 rebounds as the Knights controlled the paint for the final three quarters.

“We played a pretty good first half,” Townsend said, “but when they leaped out on us, I think it gave them confidence and took confidence away from our guys.”

Bufford’s performance was memorable but Curry was most proud of his team’s defensive performance after allowing the Golden Tigers to take the Knights into overtime in the last meeting between the two teams.

“They’re a dangerous ballclub, they’re a good ballclub,” he said. “They can score. They play downhill. We gambled too much when we were pressing (in the last meeting) and that wasn’t our intention. We gambled a lot and they got in the gaps and got downhill. This time, we were more disciplined in what we were doing.”

Bufford’s defense on Boone, as it turned out, set the tempo for the remainder of the game.

“The other guys have to step up,” Townsend said. “Micah knows he’s going to be a target. I thought they did a real good cutting off our penetration. It wasn’t our finest hour but we’ve still got life.”

Last year, LAMP had the longest winning streak in the city snapped by Catholic in the area tournament finals, then went on the road and played its worst game of the season in a sub-regional loss at Dale County. Townsend hopes his team learned from the experience.