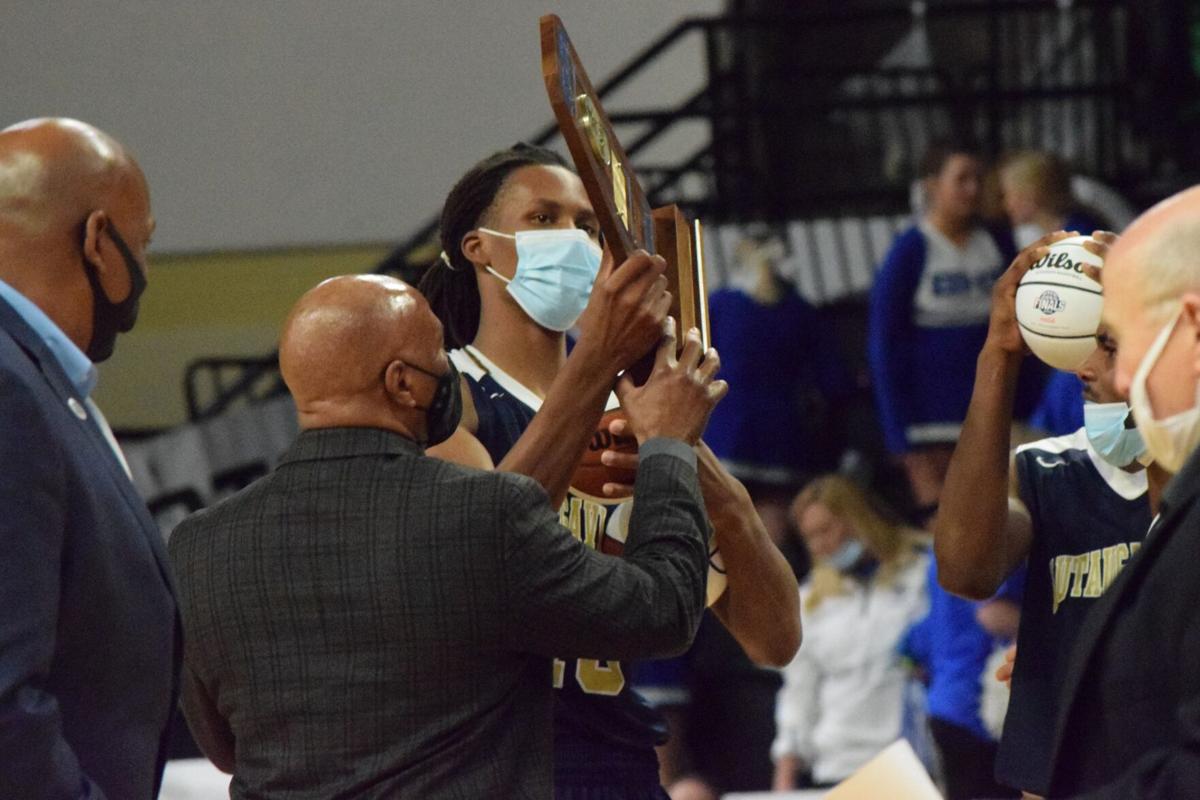 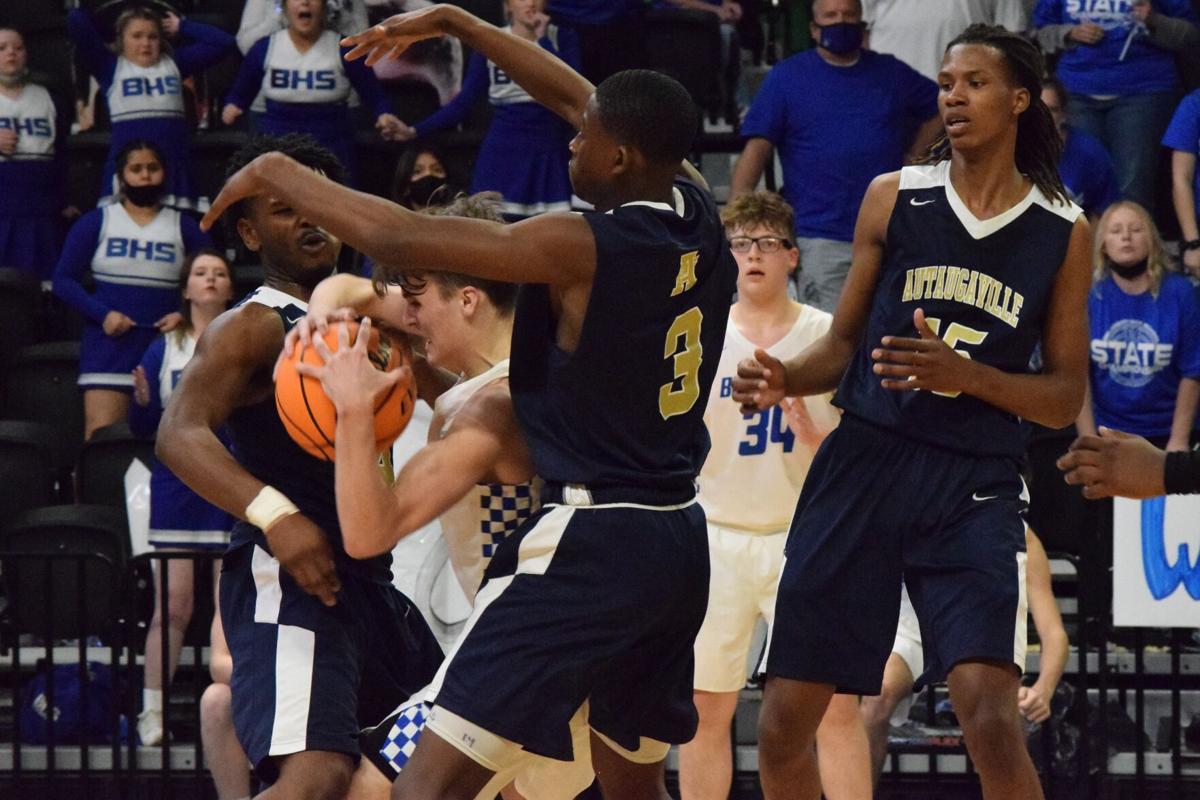 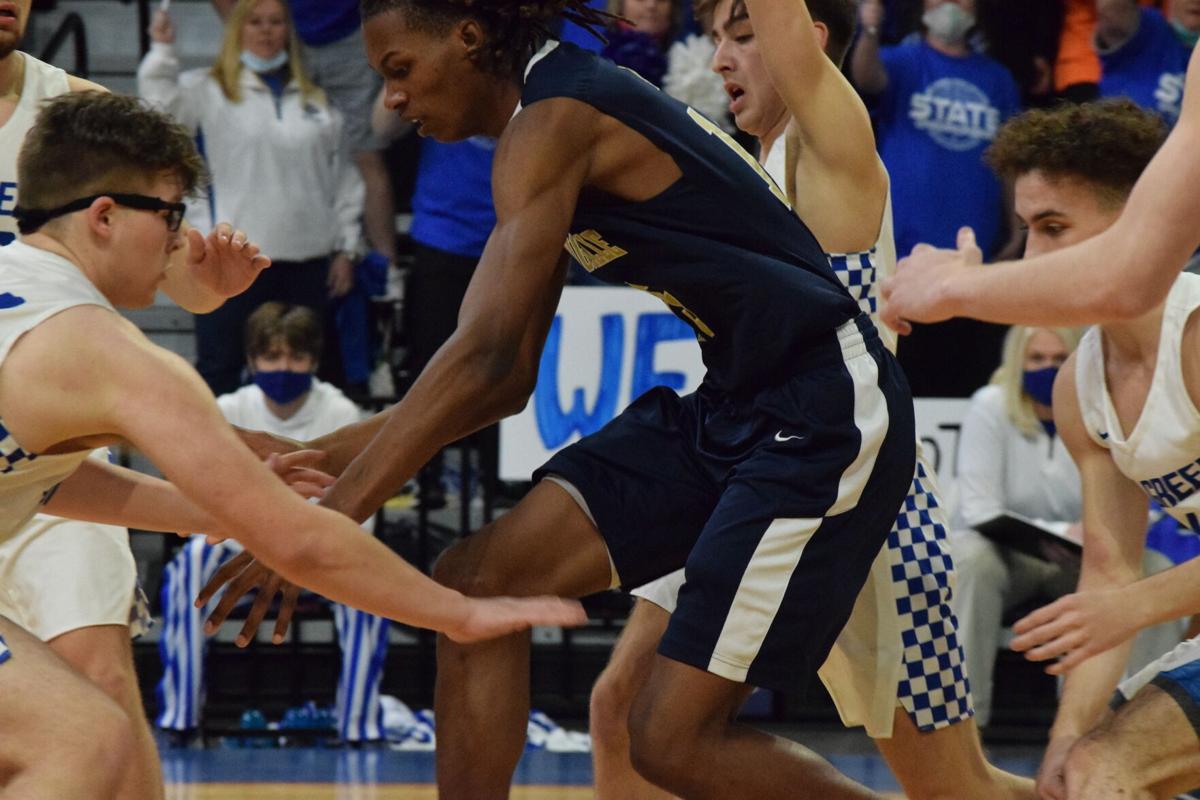 Autaugaville's Dewaun Stubbs has the attention of all five Belgreen players on the court. 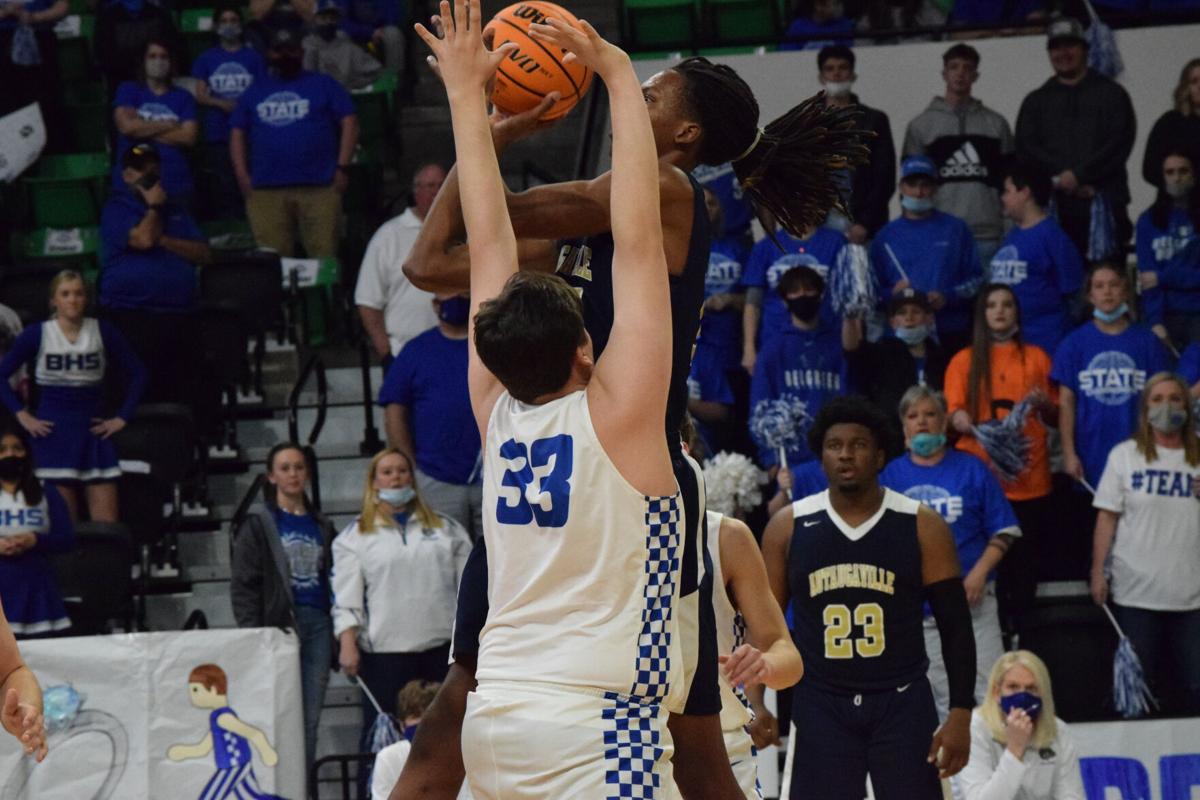 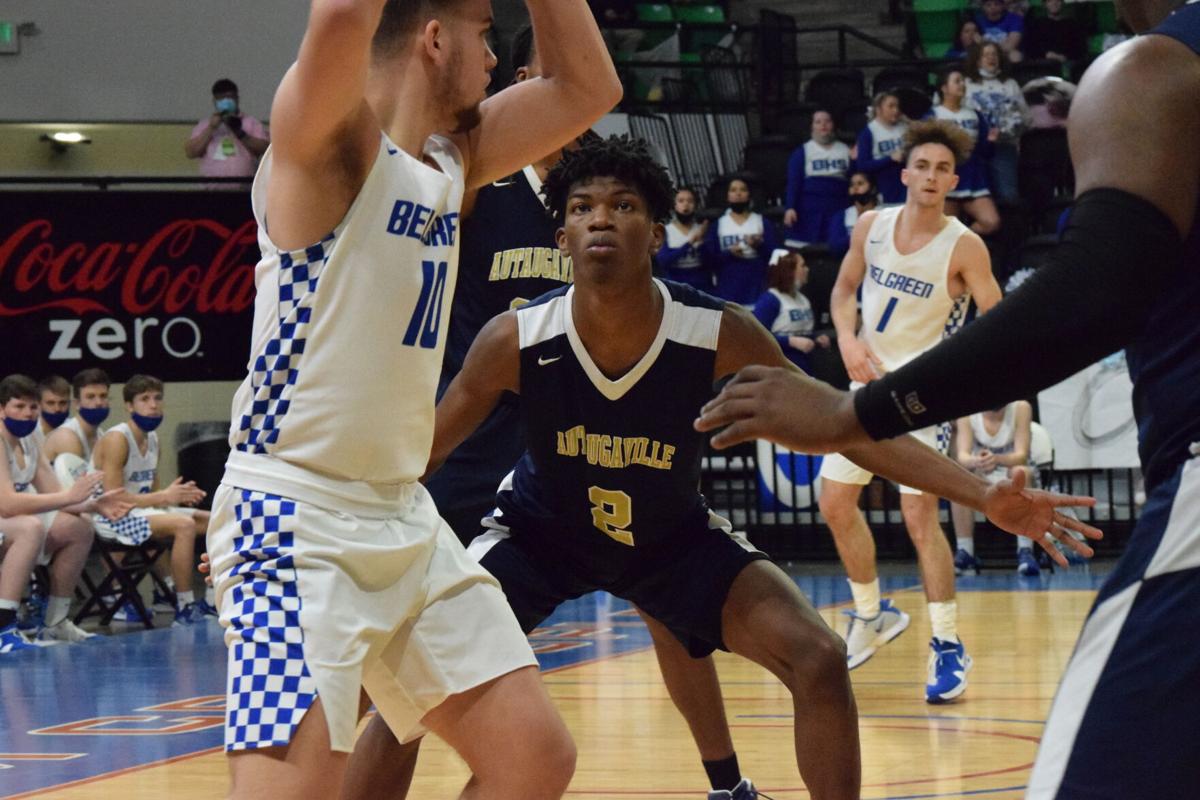 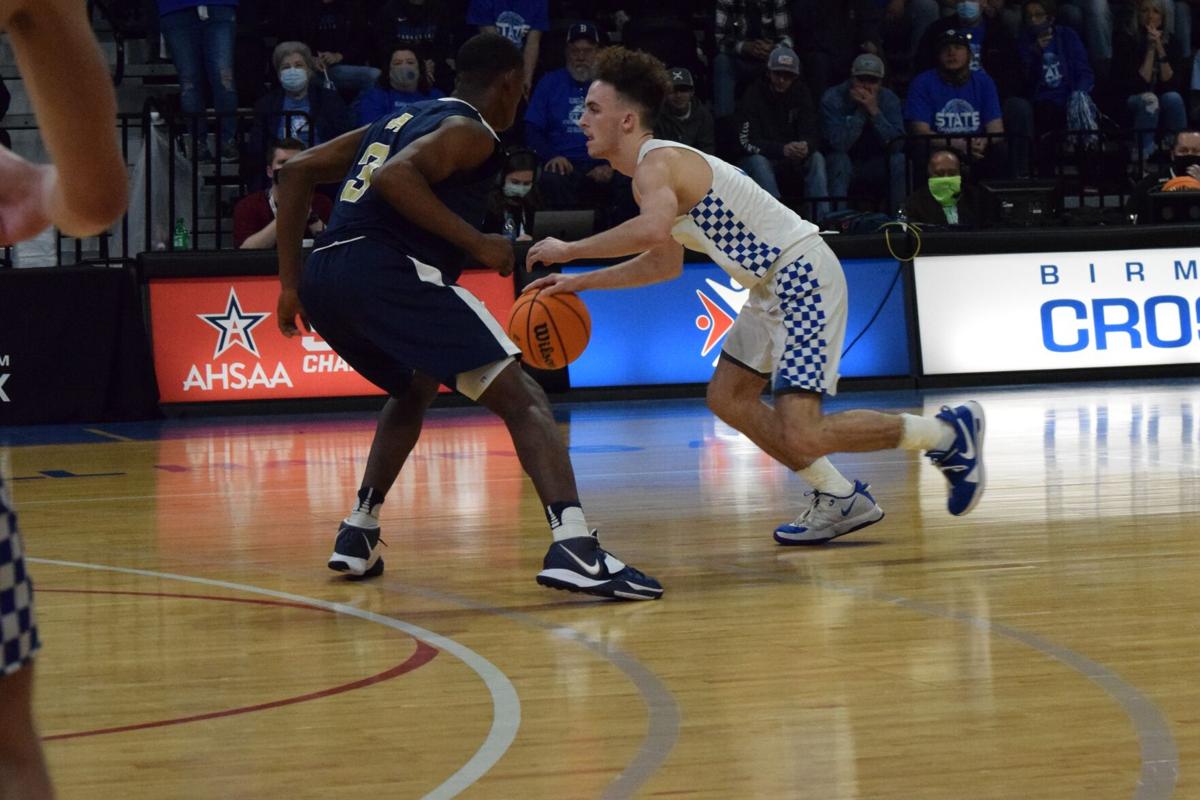 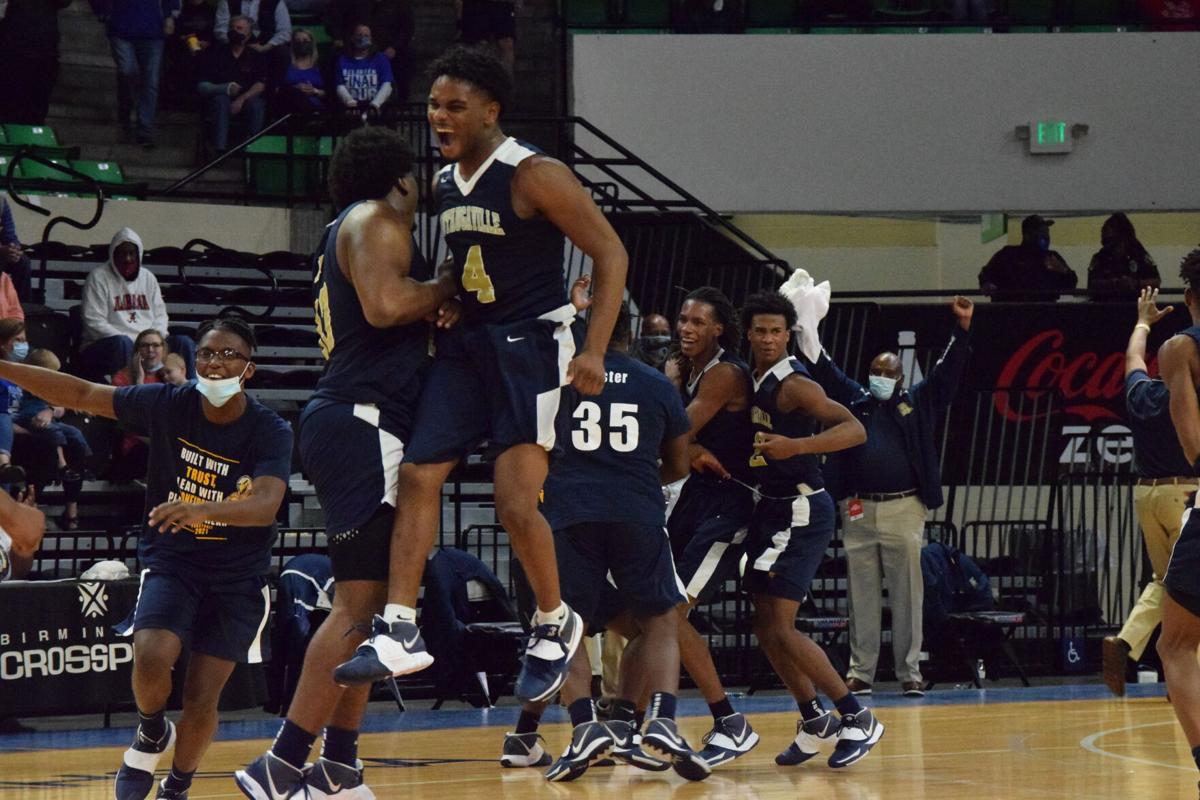 Autaugaville celebrates its first state championship since 1995 with Friday's win over Belgreen.

Autaugaville's Dewaun Stubbs has the attention of all five Belgreen players on the court.

Autaugaville celebrates its first state championship since 1995 with Friday's win over Belgreen.

BIRMINGHAM – Autaugaville had shot poorly for much of the game and trailed by five points entering the fourth quarter. If the Eagles were going to capture the 1A state championship, they’d have to rely on their defense to generate offense.

Autaugaville didn’t score but nine points in the final period, but that was more than enough after holding Belgreen without a point over the final nine minutes of the game to grab a 38-34 victory in the boys’ 1A finals at Bill Harris Arena on Friday night.

It was Autaugaville’s fourth state championship in boys’ basketball, but their first since beating arch-rival St. Jude in 1995. It was also the first for head coach Darren Golson, a player on the 1982 state championship team who had not been back to the title game since his first year as a head coach in 2005.

“I told the fellows earlier tonight that this is probably going to be one of the toughest games we’ve played,” Golson said. “They were small but when I saw them on video I knew they were going to be the smartest team we’d play as far as a complete package.”

Autaugaville (31-0) completed the season undefeated, the first team to accomplish that feat since Barbour County went 34-0 in 2012 and only the second since John Carroll was 36-0 in 2003.

The win wasn’t secured until Antonio Hardy sank both ends of the one-and-one to give the Eagles the four-point margin with 5.2 seconds remaining.

The dream didn’t look possible a quarter earlier. Autaugaville had fought to a 16-13 lead two minutes into the second quarter, but a 9-0 run over the final six minutes gave Belgreen a four-point lead at the half.

“We were lax on defense,” Golson said. “We were trying too hard, instead of just going to our spots and playing our spots. You have to play them the right way. If you don’t, they’re going to pick you apart.”

Autaugaville’s leading scorer, Dewaun Stubbs, had managed just six points as all five Belgreen players sagged around him every time he touched the ball. Stubbs, as usual, didn’t seem too concerned about the halftime deficit.

“We’re kind of a second-half team,” he said. “We play harder in the second half and in the fourth quarter. Coach always tells us the fourth quarter is going to win the game. I guess we had more energy than them.”

Even an energized Autaugaville team couldn’t find the offensive punch to combat Belgreen’s zone attack, forcing Golson to change defenses as the Eagles went to the fourth quarter.

Belgreen (26-3) had a pair of turnovers and a pair of missed shots over the four minutes as Autaugaville turned to its 22-6 edge in offensive rebounding to pound the glass for every basket in its rally from a 34-27 deficit. Nixon had a pair of putbacks, Makenzie Bristow-Matthews had another and Nixon stuck back a missed 3-point attempt by Hardy for a 36-34 lead with 3:44 remaining.

“If you would’ve told me before the game they were only going to score 38 points, I would have said we won the game,” Belgreen coach Marty Cooper said. “I thought our defense was really good. Our rebounding was horrible. We were physically overmatched.”

Both teams missed the front end of the one-and-one twice over the next three minutes, setting the stage for the final seconds. Belgreen’s 3-point specialist, Scout Bragwell, launched a 22-footer that was short, hitting the front end of the rim and kicking back to Bragwell. He attempted another 3 pointer with 12 seconds left but it was short again and Stubbs gathered in the rebound and threw the ball to Hardy, who was fouled.

“I thought it was good, going off my hand,” Bragwell said. “Then I got the rebound and I thought that one was good, too.”

Hardy sank both free-throw attempts to secure the win.

Collin Bonner led Belgreen with 16 points. Stubbs had 11 to finish as the Eagles’ top scorer and earn most valuable player honors. Joining Stubbs on the all-tournament team were Nixon, Bragwell and Collin Bonner of Belgreen and Antonial Ware of Notasulga.