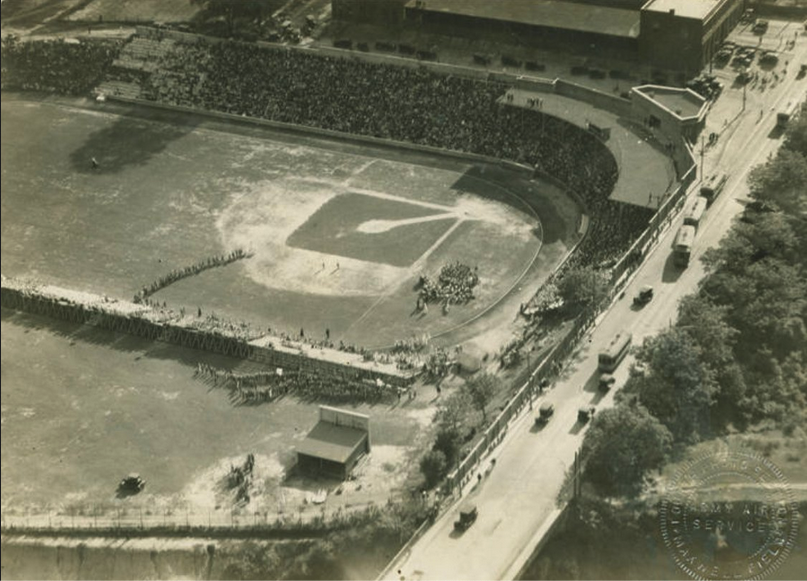 This old Army Air Service photo of Cramton Bowl portrays a time when baseball, not football, was the most popular sport in the United States. Now antique cars and buses can be seen driving along Madison Avenue while the packed stadium prepares to watch the game. 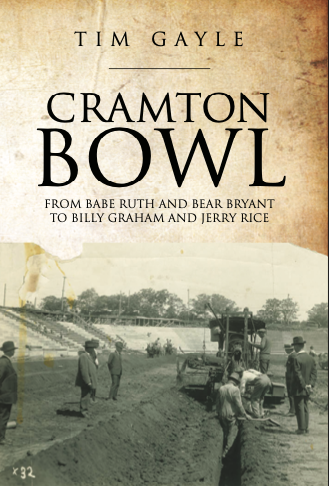 This old Army Air Service photo of Cramton Bowl portrays a time when baseball, not football, was the most popular sport in the United States. Now antique cars and buses can be seen driving along Madison Avenue while the packed stadium prepares to watch the game.

If you have ever found yourself sitting in the crowd at a ball game in Cramton Bowl or watching the Camellia Bowl on television or even driving down Madison Avenue past this famous Montgomery landmark you may have thought: ‘I'd like to know more about Cramton Bowl itself and the history that has taken place there in it's nearly century-long existence.’

If this has ever happened to you then you probably did what we all do, which is, grab your laptop or smartphone and do a quick search on your favorite search engine for books about Cramton Bowl. Until now all that your search would have yielded is the familiar and very irritating ‘no results found' or the even more frustrating result of a list of books that are really about other subjects but contain passing references to Cramton Bowl.

Now all of those fruitless Google searches are a thing of the past thanks to Tim Gayle and his new book “Cramton Bowl: From Babe Ruth and Bear Bryant to Billy Graham and Jerry Rice.”

As Sports Editor for The Montgomery Independent, Tim has a deep interest in and knowledge of sports in Montgomery. This interest is what compelled him to dig up all the old stories and history of Cramton Bowl that he writes about in the book. Stories like the time in 1922 when Sidney Lanier High School beat Troy State University 21-0 in one of the first football games played in the stadium or how Babe Ruth and the New York Yankees played their first of four games in Cramton bowl in 1928.

“My original intent,” Gayle says, “was to write a book about the Iron Bowl, which no one had done in a long time, then I thought about the Blue/Gray game or even the Camellia Bowl but doing research on those things I kept coming across references to Cramton Bowl so I decided that I'd write a book about that.”

Researching the Iron Bowl and Blue/Gray game would indeed lead to many references to Cramton Bowl. As noted in the book the Blue/Gray game was held in the stadium from its inaugural game in 1939 until 2001, Auburn played 50 games in the stadium between 1922 and 1953 and Alabama played almost as many there including a 10-6 win over Georgia in 1922 that drew around 10,000 spectators (a very large crowd at the time).

But, football aside, Cramton Bowl was designed as a multi-purpose stadium whose main purpose was holding baseball games, football came in second and other types of events were welcome as well. The reason for this is, as Gayle says, “baseball was bigger at the time the bowl was built. It drew bigger crowds.” The first athletic event at Cramton Bowl was indeed a baseball game between Auburn and Vanderbilt on May 1, 1922, as mentioned earlier, the Yankees played four games there, the Philadelphia Athletics played at Cramton Bowl long before they moved to Oakland, and the Cincinnati Reds and Brooklyn Robins also played games in the stadium.

Besides sports it has hosted numerous events in its history such as demolition derbies and even Billy Graham's Greater Montgomery Revival in 1965. With the addition of the Montgomery Multiplex in 2012 the stadium continues to host a large number of diverse events to this day.

To learn more about Cramton Bowl and it's amazing history there's no need to fear coming up with a “big goose egg'' in your search engine adventure. The solution is now quite a bit simpler and far more enjoyable, simply go down to your favorite bookstore and ask for “Cramton Bowl: From Babe Ruth and Bear Bryant to Billy Graham and Jerry Rice”: by Tim Gayle. The book was published by Page Publishing and is also available online at the iTunes store, Amazon, Google Play (in audio form), or Barnes & Noble.

• May 1, 1922 was the first athletic event was played. It was a baseball game between Vanderbilt and Auburn in which Fred Cramton, who donated the land, threw out the first pitch. A crowd of 4,500 turned out to watch Auburn beat the Commodores 10-7.

• The first football game was Sept. 30, 1922 matchup between Sidney Lanier and the University of Alabama freshman team. Alabama won 21-0. It was the only points surrendered the entire year by Lanier (who would go on to beat Troy State 21-0 in October). Andy Cohen scored a touchdown in the first half, Ben Hudson, a freshman who had played at Lanier in 1921, scored the second touchdown and Mac Brown (who would later be known as Johnny Mack Brown, the leader of Alabama’s 1925 national championship team and a cowboy actor in 160 movies) added a fourth-quarter touchdown.

• In 1923 and 1924, the Philadelphia Athletics held spring training at Cramton Bowl. The A’s played a lot of minor league teams before closing out their first (1923) year with an exhibition game at Cramton against the Cincinnati Reds on March 31 (and another on April 1). In the second game, the A’s would face Reds pitcher Eppa Rixey, a 1963 Baseball Hall of Fame inductee, who pitched a scoreless seventh and eighth in a 6-1 loss. The 1924 A’s featured future Hall of Famer outfielder Al Simmons.

• In 1924, the nation’s first HBCU “classic” was held at Cramton Bowl as State Normal (Alabama State) and Tuskegee Institute played in front of 4,000 fans. Tuskegee’s All-American, Ben Stevenson, scored four touchdowns and kicked four extra points for a 28-7 win. The Turkey Day Classic, as it came to be known, was held every year from 1924-2011 before moving to ASU.

• In 1926, the New York Yankees made the first of four trips to Cramton Bowl, facing the Brooklyn Robins on March 28. A crowd of more than 7,000 showed up to watch the Yankees win 2-0. On April 3, 1927, the Yankees and Cardinals reprised their World Series meeting, featuring “Murderers’ Row” of Earle Combs, Mark Koenig, Babe Ruth, Lou Gehrig, Bob Meusel and Tony Lazzeri (who didn’t play in the Cramton Bowl game). A crowd of 10,000 showed up to watch five future Hall of Famers (Combs, Ruth, Gehrig, pitcher Waite Hoyt and manager Miller Huggins) battle a team featuring four Hall of Famers (1B Jim Bottomley, 2B Frankie Frisch, LF Chick Hafey and pitcher Jesse Haines for the Cardinals). New York won 3-1. In 1928, the Yankees bashed the Montgomery Lions, the city’s minor-league team, 10-3, and in 1931 played the Atlanta Crackers and lost 1-0.

• The South’s first night football game was played in Cramton Bowl on Sept. 23, 1927, when Cloverdale High beat Pike Road High 71-0. A crowd of 5,000 watched Cloverdale score on three consecutive plays on the way to a 32-0 halftime lead. That game was set up by temporary lights; a permanent bank of lights were installed in September, 1929. The first game under the new lights was on Sept. 19, 1929 between the Montgomery Nighthawks and the Lineville Aggies. The first night football game in the South happened on Sept. 28, 1928 in Birmingham Southern’s 6-0 win over Auburn. Montgomery became the 27th city to install lights for baseball as professional baseball switched to night games in 1930 to save the sport (working men couldn’t attend afternoon baseball games). The city was the second in the South to install lights for baseball (they already had a bank of lights but had not specifically directed them for baseball) after Jackson, Miss., made its debut on May 29, 1930. Cramton Bowl debuted its new lights on June 20 in front of more than 10,000 as the Selma Cloverleafs beat the Lions 9-4.