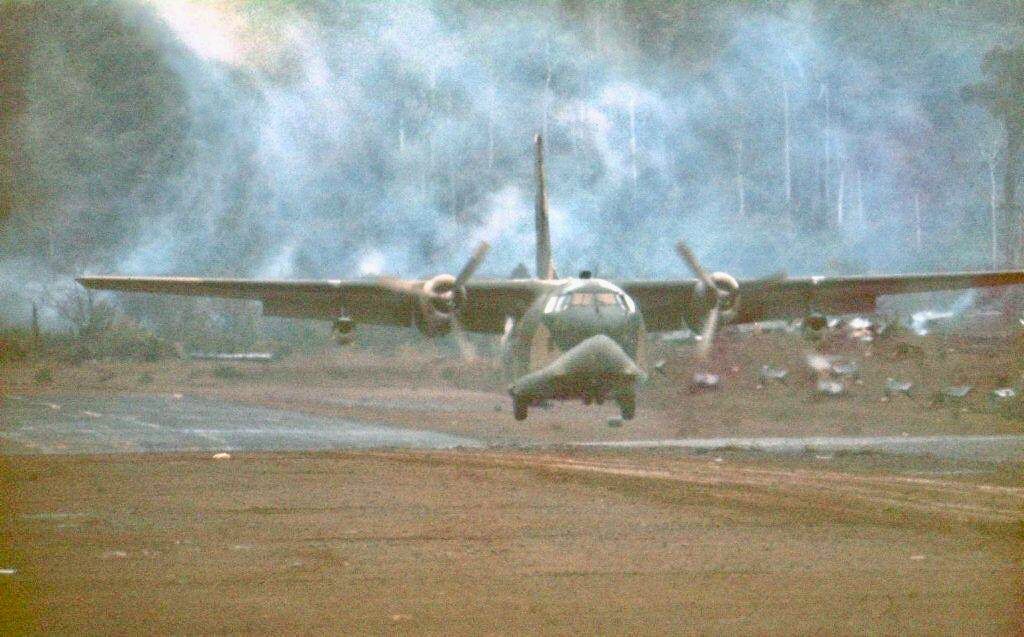 Photo: A C-123, like the one Delongchamp navigated, under fire in Vietnam. While on the ground, aircraft were particularly vulnerable to mortar fire. 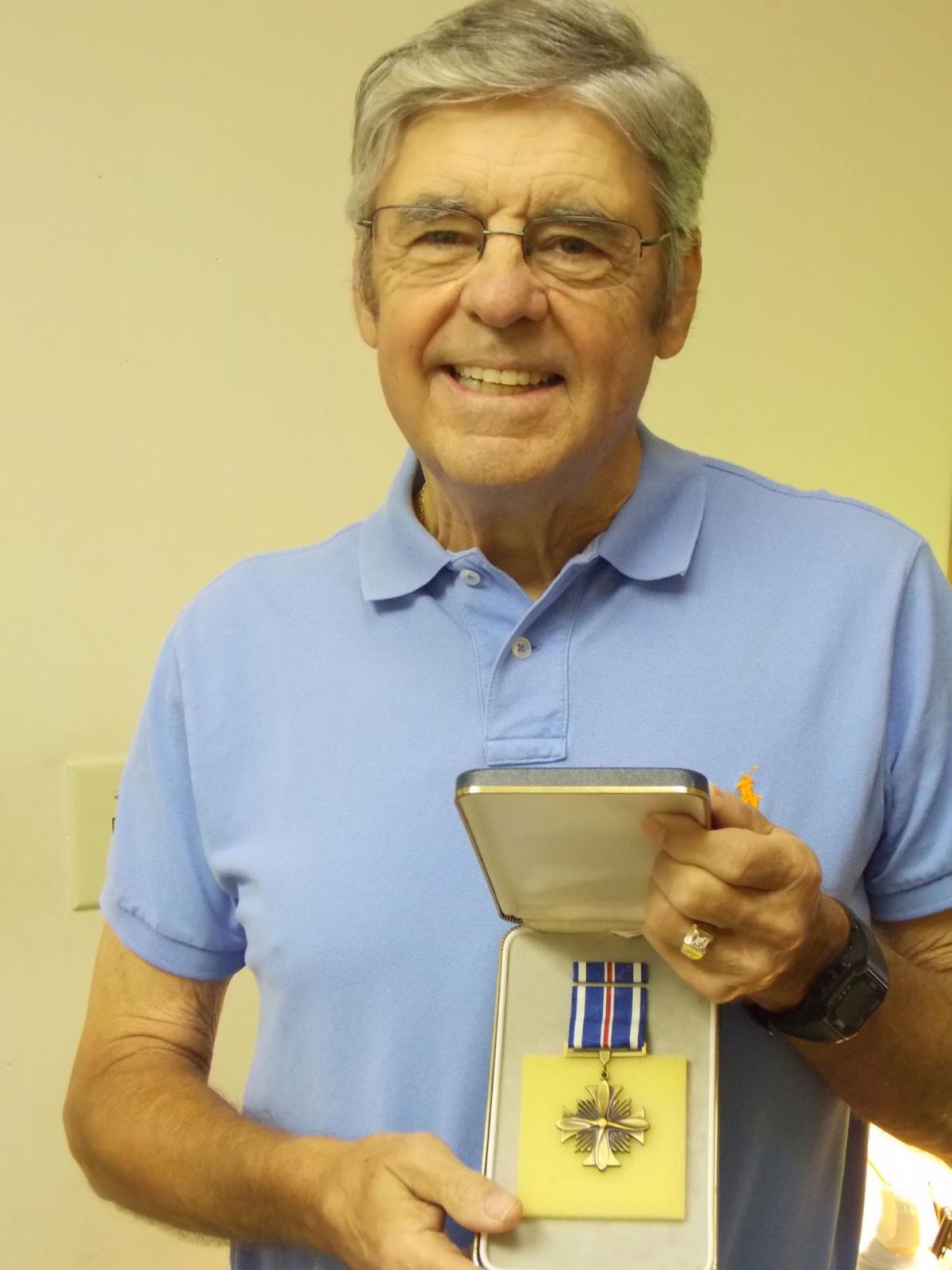 Photo: Dean Delongchamp with his Distinguished Flying Cross, awarded nearly fifty years after he earned it in Vietnam. 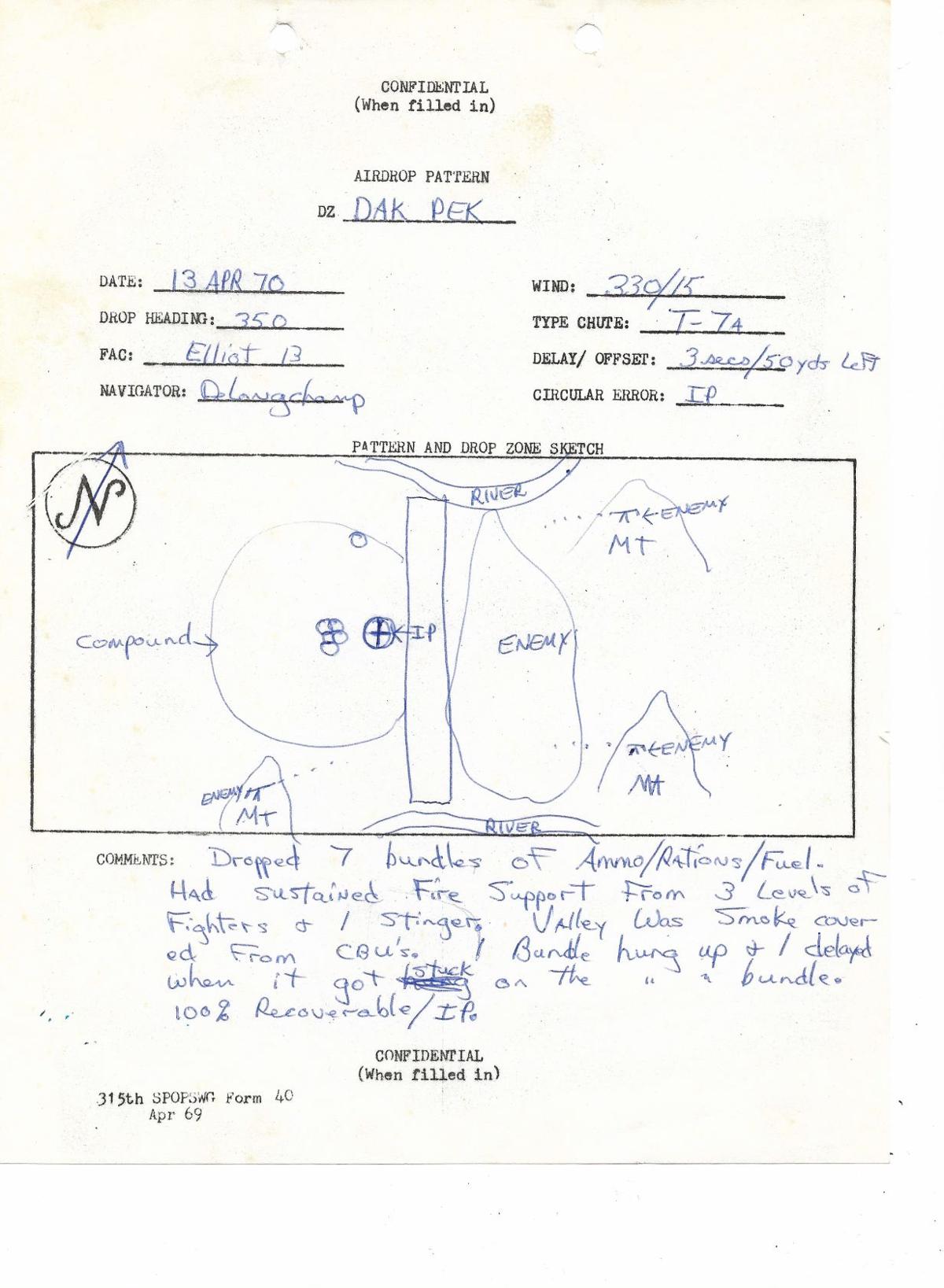 Photo: A sketch Delongchamp made as part of the report on the airdrop mission to Dak Pek. Mountains to the East and South of the compound were held by the enemy.  The small circles in the center indicate where the packages landed. 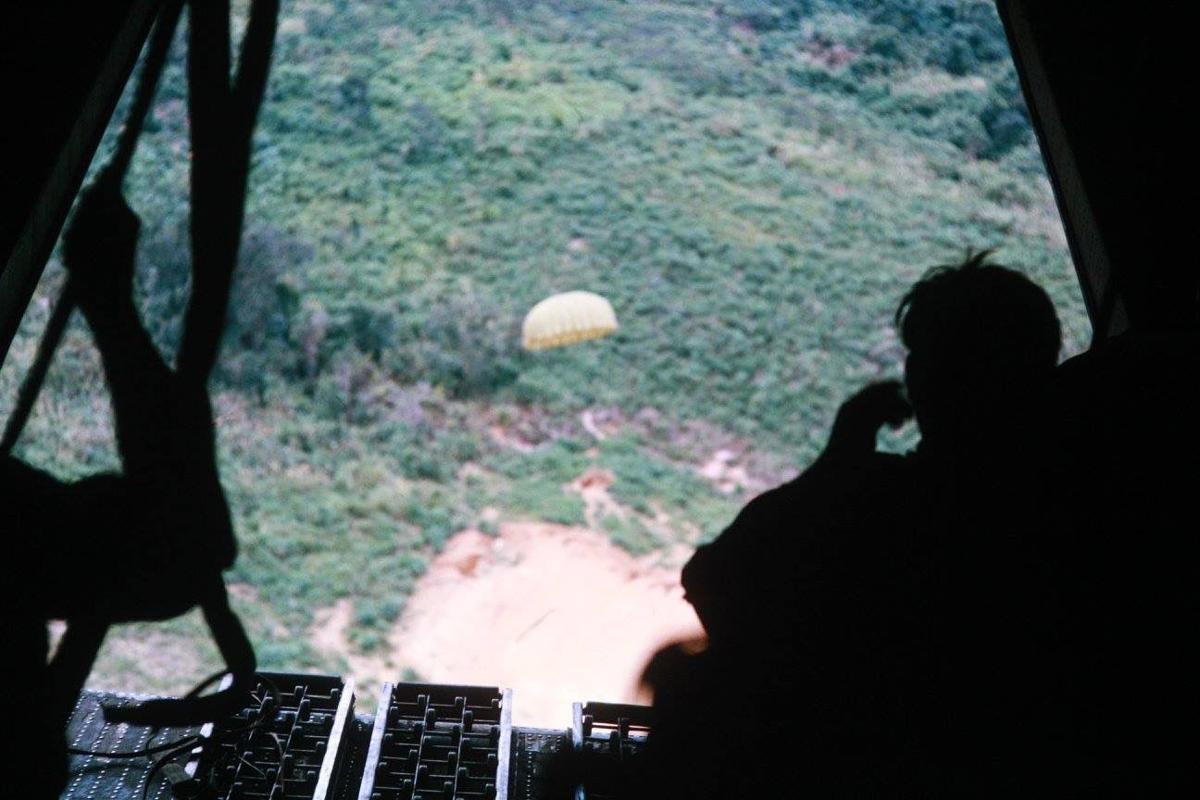 Photo: A view from the back of a C-123 while dropping supplies. The light-colored parachute can be seen in the center of the photo with a backdrop of foliage. 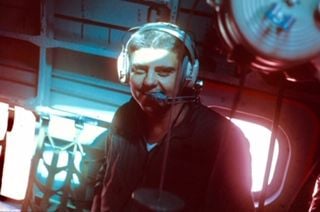 Photo: A C-123, like the one Delongchamp navigated, under fire in Vietnam. While on the ground, aircraft were particularly vulnerable to mortar fire.

Photo: Dean Delongchamp with his Distinguished Flying Cross, awarded nearly fifty years after he earned it in Vietnam.

Photo: A sketch Delongchamp made as part of the report on the airdrop mission to Dak Pek. Mountains to the East and South of the compound were held by the enemy.  The small circles in the center indicate where the packages landed.

Photo: A view from the back of a C-123 while dropping supplies. The light-colored parachute can be seen in the center of the photo with a backdrop of foliage.

For those in Montgomery who know retired Col. Dean Delongchamp (USAF) he is mostly remembered as Catholic High School’s former Athletic Director and coach. But when he was just a few years older than many of the students he taught, Delongchamp served in the Vietnam War as a navigator. For his efforts in a desperate battle in 1970, Delongchamp was awarded the Distinguished Flying Cross, but due to an administrative oversight he did not receive the medal until nearly 50 years later.

“When I left Vietnam I put it behind me as soon as I left. I didn’t think about it or talk about it. It was over. The same thing applied to my (military) career, when it was over, it was over. I didn’t dwell on it. It was time to move on.  I dove into my second career which was coaching and filling the AD’s position at Catholic High. That was a time consuming position also and I didn’t have much time to reflect on my past career.  Then in the last couple of years, in what is as close to full retirement as I’ll ever get, I started reflecting on my time in Vietnam. I remember reading a citation in my folder when I had my retirement outbrief that was for a Distinguished Flying Cross for what had been a mission into very heavy combat. Our efforts resulted in helping to save many lives,” Delongchamp said.

But Delongchamp realized he never actually received the award. His next step was to write the National Military Records Center in St. Louis, MO.

“All I asked was if the citation was in my file.   They not only found it, but acted upon it and forwarded it to the Air Force for action. About four months later I received a package in the mail from the Air Force that included my DFC,” Delongchamp said.  “I guess the write up was fairly strong.  I’m very proud to have received such an award because as a Navigator in a Pilot’s Air  Force, it’s not easy to receive because we are not usually in charge of the mission.”

The recommendation in Delongchamp’s file that formed the basis of his recognition told the tale of the battle of Dak Pek. Author Leigh Wade wrote a book about the battle titled Assault on Dak Pek, A Special Forces A-Team in Combat, 1970. In it he recounts from a perspective on the ground of the brave actions of the air support of which Delongchamp was a part.

Dak Pek was established in 1962, very early in the war and long before the U.S. involvement was very big. By early 1970, as the U.S. involvement in the war was wanning, it was used as a base for U.S. Special Forces Operational Detachment Alpha teams “A-Teams” and allied Vietnamese Special Forces (Montagnards) operating around the Vietnam/Laotian border. In the weeks leading up to the mission that would earn Delongchamp his Distinguished Flying Cross, North Vietnamese Army (NVA) movements and attacks were becoming alarming.

“The week before our missions another A-Team at Dak Seang was overrun. Three C-7 aircraft were shot down with the loss of all crew members while trying to resupply that camp. As a result, higher headquarters gave our unit their airdrop mission. In our intel briefing for our mission to Dak Pek we were briefed we could expect to lose one out of every three planes assigned to the mission. That resulted in casting a pallor over the entire unit. Many last letters home, ‘to be opened in the event of death’ were sent. Through the grace of God and the skill of our crew, deep in the recesses of our attic, hidden in some box, exists a letter written to a young wife that never had to be read,” Delongchamp said.

On April 11, 1970 a series of successive attacks on the base turned the situation at Dak Pek desperate. As described in Wade’s book, the base was nearly overrun with enemy soldiers inside the perimeter having taken over some allied bunkers and most of the surface structures on the base were destroyed.

When the radio call went through that the soldiers needed help, part of that help included the efforts of Delongchamp and his fellow airmen. Much of the support came in the form of direct fire from the allied aircraft towards targets on the ground. But immediate evacuation was not even in the realm of possibilities and the soldiers on the ground were quickly running out of the ammunition and water not previously destroyed in the waves of attacks.

Delongchamp and the other airmen faced heavy fire from the ground and had to traverse a gauntlet of rocket fire.

“Because it was an airdrop mission, I was in charge of almost every aspect of the mission. I planned where we were going, how we would get there, how we would come into the camp, what airspeed and rate of descent we would use to try and avoid the myriad of enemy forces that had overrun most of the camp, and most importantly, I determined when we would drop the cargo. As we descended to about 200 feet above the ground, through very heavy fire, I called out “Green Light” which released our parachutes filled with ammo and other military supplies that helped save the day,” Delongchamp said.

Wade describes the situation in his book:

Several Sky Raider aircraft suddenly appeared at the mouth of the valley, flying low, they were closely followed by a C-123. The C-123 began making very low passes and the brightly colored cargo chutes came floating down on top of us. Several men came out and began breaking down the ammunition and carrying it to the fighting positions. All of the bundles landed inside our perimeter wire and none was lost to the enemy. The C-123 was taking heavy ground fire, and the Sky Raiders, using our directions began hitting some of the many enemy concentrations. Besides ammunition, that first parachute resupplied a pallet of water cans. With the much needed ammo and water distributed, and Tac-air on the scene, I was no longer concerned about being overrun again. If the enemy had failed to take us at night, with everything in his favor, he surely wouldn’t be able to do it during the day.

The battle raged for nearly three days and on the first night the Americans had been reduced to a single circular mortar pit to defend. Of particular concern was an artillery piece that sat atop a hill overlooking the U.S. position. The large recoilless rifle was used by American and allied Vietnamese forces to provide support, but once it was in the hands of the NVA it could have been turned against its owners. As it turned out the NVA improperly loaded the first round into the gun and caused it to jam.

Decades after he helped save the day for many of his fellow soldiers, Delongchamp now has the medal he earned at Dak Pek to prove it.