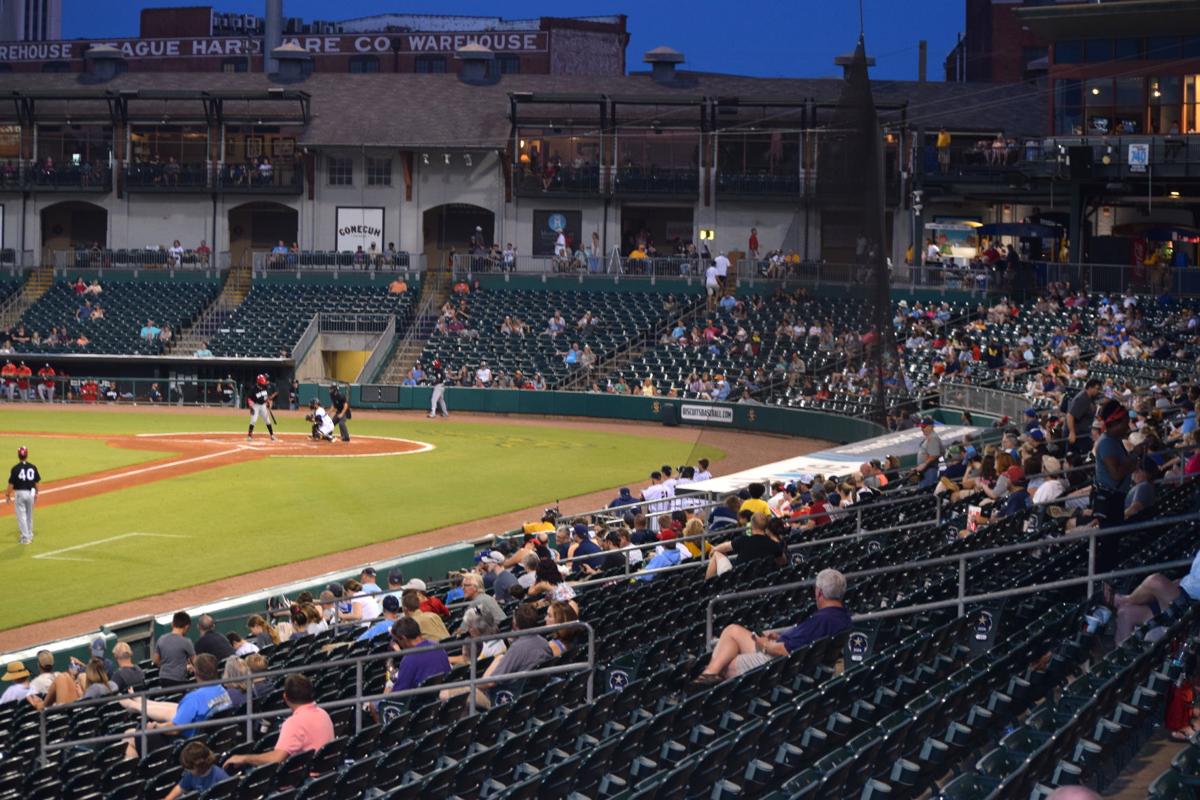 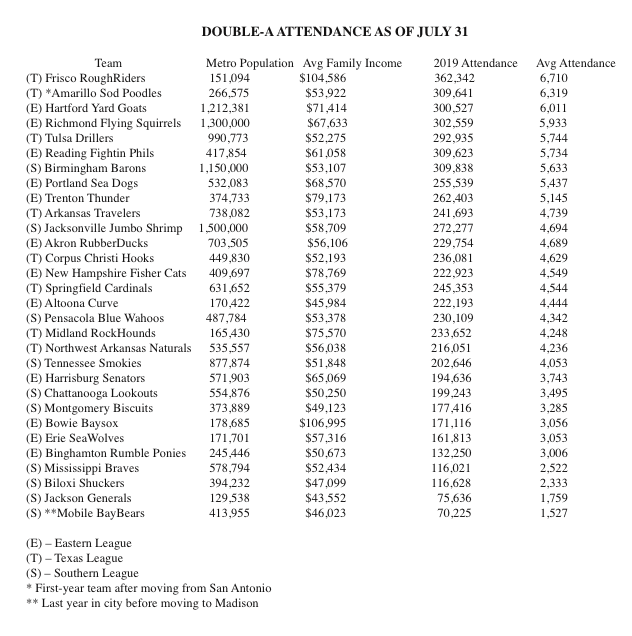 With 30 games remaining in August and September, the Montgomery Biscuits are on a record-setting pace to become the city’s winningest minor-league team since joining the Southern League in 1965.

The attendance at Riverwalk Stadium continues to dip, with few fans showing up to cheer alongside the 1,500 or so diehard fans that brave the August heat. While the Biscuits are on a record-setting pace for wins, Riverwalk Stadium is on a similar pace to set an all-time low for attendance, breaking the average attendance mark of 3,296 set in 2016.

Despite the paltry numbers, city and team officials remain optimistic.

“There is a lot to be encouraged with,” Biscuits general manager Mike Murphy noted, “but you see a lot of (empty) green seats and it’s not fun.”

The franchise continues to do well in food sales, including catering, with its Biscuit Basket sales in jersey, hats and shirts and attendance in its suites. That’s enough for Montgomery mayor Todd Strange, who refuses to sound the alarm as in-park attendance is on a slight rise over the last two years since new ownership took over the franchise.

“I am not concerned with Biscuits baseball,” Strange said. “Would we like to have more than 3,300? Would we like to be leading the league in attendance? Absolutely. But our souvenir sales are still very strong and I have to look at it from the standpoint of the whole enterprise.

“The more important thing is how are they doing financially. The financials are a lot stronger than they were under the previous (owners). Food service is obviously a big part of that so the other events they might have is included in that equation. We certainly would want to have more people to enjoy the fact they’re the first-half (division) winners and they’re leading the league in the second half. We’re going to have a playoff series here.

The Southern League is split into North and South divisions and plays a split season with its all-star game sandwiched between the two halves of the season. The Biscuits won the first-half division race, becoming the first Montgomery team to do so since the 1977 Rebels. And with the team posting its 70th win in late July, the Capital City’s minor-league team is closing in on the Montgomery record of 86 wins established by the ’77 Rebels.

They’re not going to catch the 1992 Greenville Braves, who became the only Southern League team to win 100 games in a season, but the Biscuits may become the winningest team in the Southern League since that season.

The magical season that has good pitching, timely hitting, base stealing and great fielding makes first-year manager Morgan Ensberg a leading candidate for Southern League Manager of the Year honors. But it isn’t translating into more fans at Biscuits games.

“There are a lot of big-leaguers on this team that are going to be famous,” Ensberg said. “In towns where there is a lot of support, they all talk about what they saw – how the player was successful, because in a year or two, you’re not going to be able to get anywhere near them.

“I played in Round Rock (Texas) that has support coming out of its ears and you’re still in contact with those people. This is the time where it’s kind of fun.”

Ensberg played for Triple-A Round Rock (Texas) in 2000 and 2007 and for Buffalo in 2008. In between, he played for the Houston Astros on a World Series team in 2005 and was an MLB all-star that season.

While Ensberg keeps his focus on what is going on at field level, Murphy is focused on entertaining the crowd.

“One of the things I say all the time is we need to find people that hate baseball and have them come to the ballpark and have a good time,” Murphy said. “If dad and son are huge baseball fans but mom doesn’t want to go because she doesn’t like it, they’re not going to come as often as if mom’s coming and even though she doesn’t want to be there (for baseball), she’s having a good time.

“A lot of our philosophies are driven on people coming to the ballpark and having a good time in spite of the baseball that’s going on. If you are a hard-core baseball fan, you’re not going to see any better baseball unless you drive to Atlanta. But we can’t rely on that. Even at the Major League level, it’s more about the experience. More Major League teams are shifting their philosophies toward what we do at the minor league level.”

But there are probably times when Murphy wants to bang his head against the wall. There are more promotions than ever, tickets are interchangeable if unused on their original date and there are times when multiple promotions targeting different demographics are going on at the same time. It can’t put a dent in the culture, however.

On a recent Sunday afternoon, the Biscuits handed out free Biscuits socks to all children 14 and under. Midway through the second inning, long after the last socks should have been handed out, team officials put the remaining half in three boxes and put them away. Socks given to the first 500 children drew roughly half that in attendance.

“The kids’ giveaways have been a little slower to catch on,” Murphy said. “The jersey is still, by far, the most successful one. But we know Sundays are a challenge in our market. We’re never going to say skip church and come to the game, but we still have to play games on Sundays.

“One thing that we see is a positive thing for us is how active our kids’ members are. We have right around 5,000 members. We had the same setup in Richmond and had 25,000 active e-mails at one point and our best redemption in Montgomery is equal in number to our group in Richmond. That 5,000 number has a lot of room to grow but if we can keep that same activity going with that group, it’s something we can build off of.”

Murphy’s job is to build brand loyalty but here’s a statistic he can’t ignore: Montgomery ranks 21st in metropolitan population among the 30 Double-A franchises scattered throughout the country and 26th in median family income. In the 10-team Southern League, the Biscuits are located in the second smallest metropolitan area (behind Jackson, Tenn.) and the fourth lowest family income.

“You kind of have to look at it from a market standpoint,” Murphy said. “To say that we should outdraw Birmingham because we have a better team than Birmingham is a difficult conversation to have. The greater Montgomery metro area is drawing from right around 300,000 people, while in Birmingham they’re looking at a little over a million. If you look at some of the metro areas that are in our league, for us to be fifth or sixth is pretty on par with the size of our area.

“We want you to have a good experience. And that experience starts when trying to find parking downtown, it goes from how quickly you go through the line (entering the stadium), it goes through how much money you spend. That is a big factor for everything we do.”

Tom Dickson and Sherrie Myers brought the Biscuits to Montgomery in 2004 and created a brand that quickly became nationally known before Myers sold the team to Lou DiBella in the middle of the 2017 season. Murphy pointed out the brand awareness of the Biscuits was a big plus in keeping the franchise profitable.

“The previous ownership group did a great job of getting the team established, not only here in Montgomery but nationwide,” Murphy said. “The Montgomery Biscuits are a well-known name and a well-known organization. But after 13 or 14 years, there was a change that was needed and our new ownership came in and wanted to add a shot of life to that.

“(Putting more fans in the stands) is not going to happen overnight. It has to happen gradually as the city grows. It’s being able to see the short successes you have. How can we keep tweaking that and keep that fresh? Or how can we take that philosophy and put it on different nights? The other thing to keep in mind, it sounds like a sports cliché, but don’t make excuses for yourself, just keep your head down and work.”

In the meantime, the franchise’s attendance is just about where you would expect for a minor-league team in a smaller, economically-challenged market but adding more free gifts through promotions, targeting more children through school appearances by the mascot and changing start times to keep fans in the downtown area don’t seem to have any lasting effect.

Winning doesn’t appear to have much effect, either. At least eight players have made the trip up to Triple-A Durham this year, one step short of the Tampa Bay Rays. Brendan McKay started the year in Montgomery but has spent the last month traveling from Durham to Tampa. He may be joined by other Biscuits on the MLB squad before the year is out.

Meanwhile, Montgomery is preparing for a best-of-five series for the division title beginning on Sept. 5.

“One thing we can draw on – and we’ll see what happens as we get closer to September – is the whole civic pride type of thing,” Murphy said. “We’re in this playoff run. Hopefully, our community comes out and supports us, saying not that Jesus Sanchez and Josh Lowe were champions but that Montgomery is champions. Whoever it is working in downtown Montgomery and coming every day that is a Braves fan doesn’t care that the Rays won another minor-league championship but they do care that Montgomery won a championship.”

“There is a lot to be encouraged with,” Biscuits general manager Mike Murphy noted, “but you see a lot of (empty) green seats and it’s not fun.”